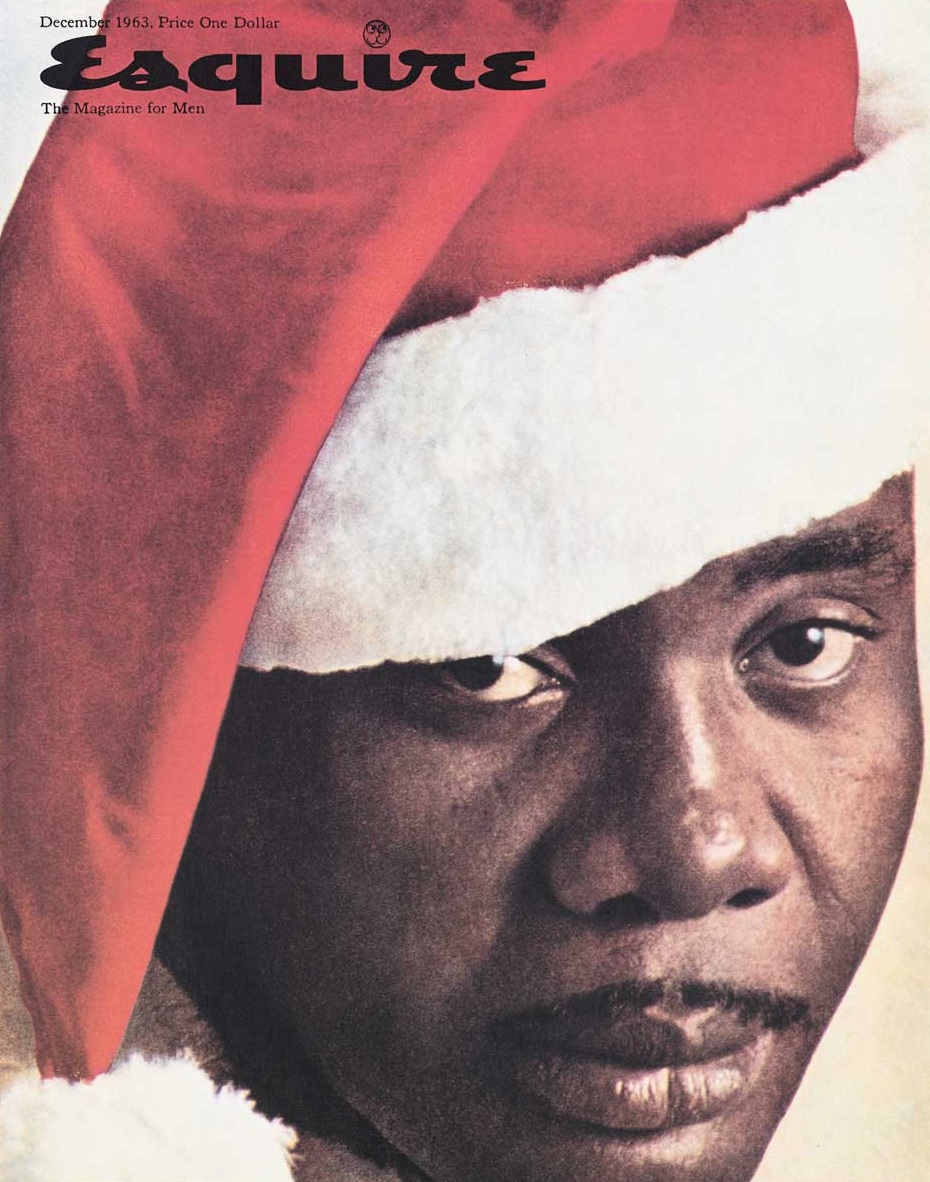 Fifty-two years ago this month, the great Esquire art director George Lois decided to dress heavyweight boxing champion Sonny Liston in a Santa outfit and put him on the magazine’s cover. Liston was the first black Santa most Americans had ever seen, and he wasn’t just any black man — he was white America’s worst nightmare, a street thug who’d served time for armed robbery and whose professional boxing career was largely run by the mob. How unsavory was Liston? In 1962, President John F. Kennedy had actually advised then-champ Floyd Patterson not to give Liston a title shot because of Liston’s ties to organized crime, and NAACP leaders had also urged Patterson to dodge Liston because they thought a Liston victory would set back the civil rights movement. Their fears were borne out when Liston knocked out Patterson in the first round of their 1962 bout and then KO’d him in the first round again in their 1963 rematch, cementing his aura of invincibility. Putting him in a Santa outfit was a stroke of genius. When the cover ran, several of Esquire’s advertisers severed their ties to the magazine, and many subscribers demanded refunds.

The timing was just right, too, because Liston’s air of menace was about to be punctured in a way that nobody could have anticipated. Two months after the cover ran, he lost to Muhammad Ali (who quickly became his own version of white America’s worst nightmare); a year later he lost the rematch. Liston never again contended for the title and is now viewed largely as a tragic figure.

A quarter-century later, a street thug named Mike Tyson assumed the same cultural role that Liston had played — brutish, primitive, indestructible, a convicted felon. When Tyson lost his title to Evander Holyfield in 1996 and then lost the rematch in ’97 (the famous “ear bite” bout), Sports Illustrated, in an obvious nod to George Lois’s original Esquire cover, flipped the script and gave Holyfield — the “good guy” — a Santa-themed cover showcase. Clever, but it didn’t have the same power.

Whether you choose to envision Santa as a black boxer, a creepy old white dude with a beard, or anything else, he’s left something under the tree for 46 Uni Watch readers — the winners of this year’s reader-appreciation raffle. Here are the winners and the prizes they’ve won:

I’ll start mailing these out in batches over the next week or so. It’ll take a little while to get everything shipped, so my thanks in advance for your patience.

As for today, the Tugboat Captain and I will be driving to Queens this morning to pick up my brother (today is his birthday), and from there we’ll head out to Long Island to spend the day with Mom. Later on, in the evening, TBC and I plan to meet up with a bunch of pals for drinks and pernil at my friend Garth’s house in Manhattan. In short: Should be a festive day, holiday traffic notwithstanding.

However you’re spending the day, please accept my sincerest wishes for a wonderful Christmas. I’d also like to send extra-special holiday shout-outs to the other folks who make this site so great: Mike Chamernik, who does the Tuesday and Thursday Tickers and the Question of the Week; webmaster John Ekdahl; membership card designer Scott Turner; T-Shirt Club designer Bryan Molloy; “Collector’s Corner” columnist Brinke Guthrie; and of course deputy editor Phil Hecken, the greatest right-hand man anyone could ever hope to have. A healthy and a happy to one and all. Peace. ”” Paul

Thank you Paul, Phil, and everyone else and Merry Christmas!

There’s a kind of hush… all over the world… tonight…
Oh wait. That’s not right.
We wish you a merry Christmas… and a happy new year…
That’s the ticket.

Merry Christmas Uni Watchers! You guys are the best.

Thank you Paul, for everything you do!

Merry Christmas to all, especially to Ricko, wherever you are…

Here, Here, hope all is well Ricko, you added a lot to this site for many years.

Thanks for the history lesson. Another reason this site is so great. Now I’ve got a little more backstory to Mark Knopfler’s “Song for Sonny Liston,” off his excellent Shangri-La album (also featuring a knock-out tune about Ray Kroc and the founding of McDonalds, and other biographical/historical songs):

link
“Joe Louis was his hero,
He tried to be the same.
But a criminal child
Wears a ball and chain.
So the civil rights people
Didn’t want him on the throne.
And the hacks and the cops
Wouldn’t leave him alone.”

Merry Christmas to all! As Crazy Eddie would say, It’s Chrsitmas in July here in NJ!

Anyone else feasting their eyes on the Christmas day jerseys today?

Merry Christmas, Uni-verse. May you share it with those you love.

And Phil, you do a wonderful right hand job — don’t let anyone say otherwise.

Peace and grace and a merry Christmas to Paul and Phil and the whole Uni Watch community.

Happy Holidays, Merry Christmas, Happy Kwanza and Good Festivus for the rest of us and to all a Happy New Uni-Year!! Thanks to Paul and everyone involved with Uni-Watch!

Only White America’s worst nightmare? So Black Americans have
nothing to fear from armed robbers and street thugs?