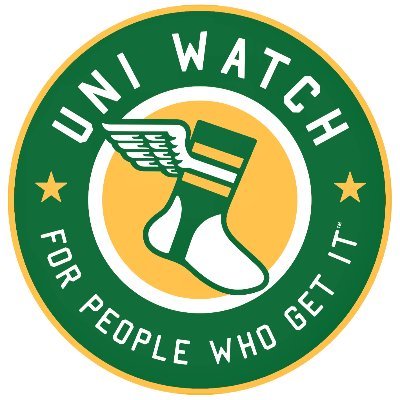 Uni Watch is a media project that deconstructs the finer points of sports uniforms, logos, related topics in obsessive and excruciating detail. It’s not about fashion — it’s about documenting and assessing the visual history of sports design (or as we like to call it, athletics aesthetics), and about minutiae fetishism as its own reward.

Uni Watch debuted in May of 1999, as a column in the sports pages of The Village Voice. It was a very small column in those days, and it was designed primarily for print, not for the web, so there weren’t any photo links. When the Voice sports section was eliminated in 2003, the column briefly moved to Slate.com. Then, in the summer of 2004, the column moved to ESPN.com, where it continued to run until March of 2019. The column has also had brief runs in Sports Illustrated and on InsideHook. This blog, designed to supplement the column, launched on May 17, 2006 and has served as a sort of home base for the project and the Uni Watch readership community.

The blog’s staff and credits are as follows:

People often ask me, “How’d you get the idea to write about uniforms?” The short answer is that I spent a lot of the 1990s writing about the small details of brand design, package design, industrial design, and so on. I’d always been a big sports fan, so applying that detail-driven sensibility to uniforms seemed like a natural next step. (You can learn more about the story behind Uni Watch here.)

Want to know more about me? Look here. — Paul Lukas