The Maple Leafs today became the 10th NHL team to sell off space on their uniform, as they announced that Dairy Farmers of Ontario will be their uni advertiser for the upcoming season. 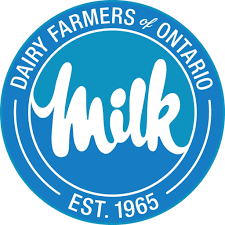 The thing is, DFO’s logo isn’t, you know, “DFO” — it’s a stylized treatment of the word “Milk.” So that’s what will be appearing on the Leafs’ jerseys. And that’s sort of funny — like, there’s something inherently amusing about rough, tough hockey players repping something so wholesome, right? (Yes, I know the Indy 500 winner traditionally enjoys a post-race bottle of milk, but it’s hard to think of any other milk/sports crossovers.)

I have three questions about all this:

Oh wait, one other thing: If you click-to-enlarge the photo at the top of the page, you’ll find that you can’t see any edges to the ad patches. I’m pretty sure that’s because they just Photoshopped the “Milk” logos onto a pair of ad-free jerseys. The real ad patches will likely look more patch-y (and thus more annoying). We’ll find out for sure this Saturday, when the Leafs have their first preseason game.

Meanwhile, if you’re keeping score at home, the other nine NHL teams to have announced uni advertisers so far are the Blue Jackets, Blues, Canadiens, Capitals, Coyotes, Golden Knights, Jets, Penguins, and Wild. A league exec has said that he expects about half of the league’s 32 teams to go with uni ads this season.

As Ads go, it isn’t obtrusive and milk is a positive message.

It will likely be more obtrusive when we see it as a real patch, not just a logo Photoshopped onto a photo.

Sad state of affairs when this is actually sort of decent news. Which is to say instead of an ad for some soulless mega corporation or some pointless/materialistic lifestyle brand/app, this ad is just representing an association of farmers and the ad doesn’t even contain farms assoc. name, and it is rendered in team colors.
If my team was getting an ad patch, I’d be relieved that this was what we were stuck with.

Sad that the Leafs were among the first 1/3 to do this, and thus sully their classic sweater. Only silver linings are: 1. It isn’t some soulless corporate behemoth (or worse, a casino), and 2. It’s rendered in team colors (thank the gods).

This one is pretty funny. I don’t understand why dairy farmers are still promoting milk, isn’t that too engrained in our culture by now. In Mexico, you don’t see ads for Milk, but a lot of ads for different brands of milk who compete against each other.

Proofreading, it says that beer vendors will be supplemented by *beer* vendors.

Now if they could make that fight strap in the shape of udders we’d really have something.

Doesn’t the winner of one of the Tour de France stages also guzzle milk on the post-race podium?

Its worth noting that in Canada, milk and dairy is basically a cartel. There’s a quota system for producers and you’re either in or you’re out. Prices and production are fixed by marketing boards, Its completely anticompetitive and its completely legal.

Milk in Canada costs twice what it does in the US, and the dairy cartel works their collective butts off to ensure the market stays the way it is.

Its not an ad for milk, its an ad for the milk cartel. Its like OPEC doing a jersey ad for “Oil”

Sorry if this sounds all tinfoil-hat but its a crazy weird industry.

I so want their goal horn to be a MOOOOOO!!!! now.

“Will Leafs fans start throwing cartons of milk onto the ice when the team scores a goal?”

We might be talking *bags* of milk here, actually. Which would only add to just how badly things could go wrong if they tried it.