Most teams just wore their regular batting helmets. But Brewers equipment manager Jason Shawger always goes the extra mile on holiday helmets. For many years he’s been giving the Brew Crew pink Ma’s Day helmet logos, and when possible he tries to match the holiday cap. In 2019, for example, he gave the team pink helmet brims (just like that year’s caps). And as you can see above, with MLB going with grey Ma’s Day caps this year, Shawger had the Brewers decked out in grey helmets, with full pink graphics fore and aft.

Did Shawger procure a new set of helmets just for this game? Nope — he tells me he applied a coating of gray Plasti Dip to the team’s existing lids. “I wish it was a lighter shade, to match the cap,” he says, “but this is the only grey available in Plasti Dip!” He says it takes just a minute or two to remove the coating and restore the original color.

It’s also worth noting that Shawger did all of this for a road game! Impressive stuff.

Also of note from yesterday:

• Phillies reliever José Alvarado inscribed two messages on his cap — “I love you mamá” and “Happy Mother’s Day, specially for my mother” (click to enlarge): 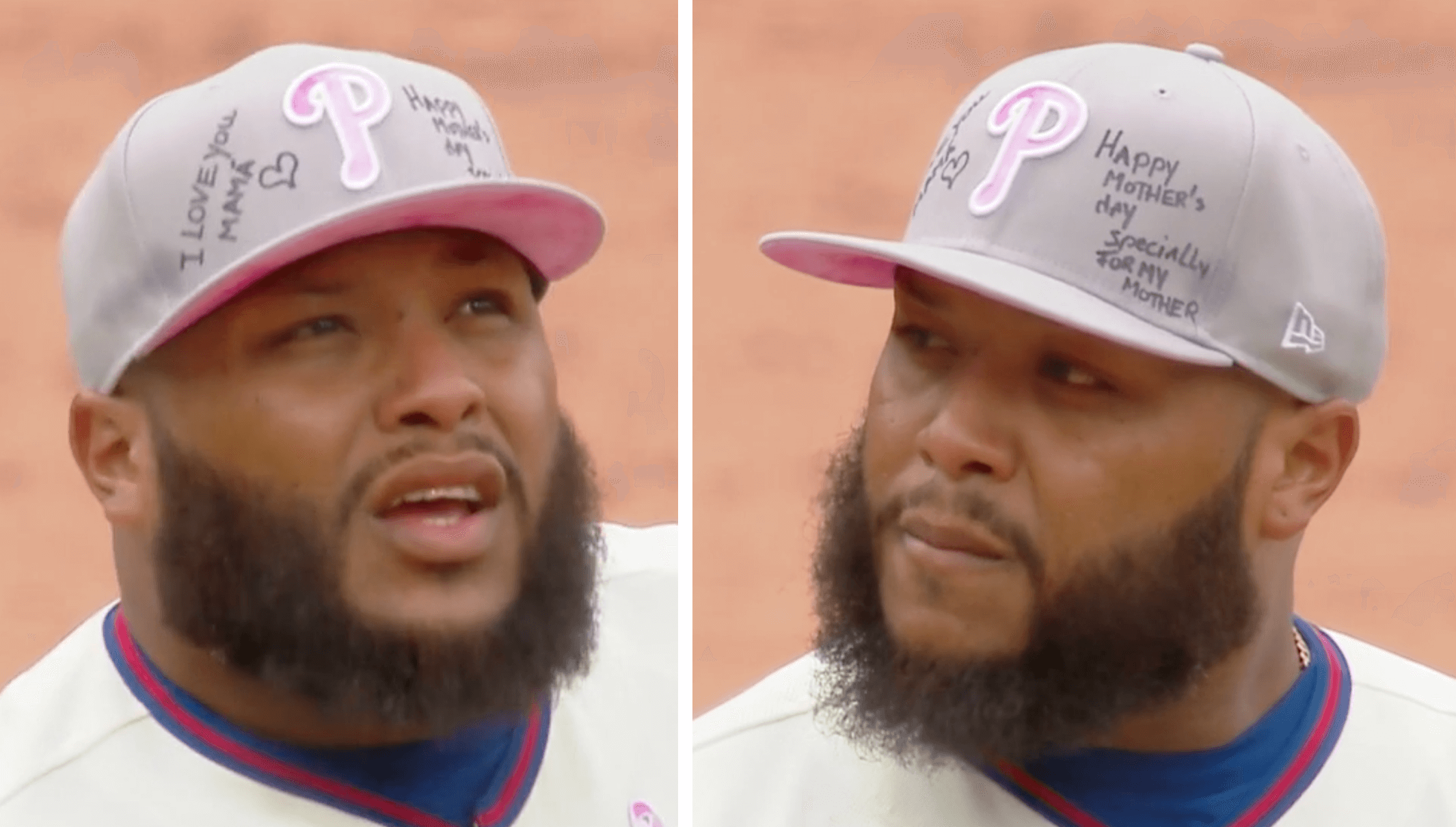 • The Padres do the G.I. Joke thing for Sunday home games, so they managed to combine two bad tastes that taste worse together (first time they’ve been home on Ma’s Day since 2018): 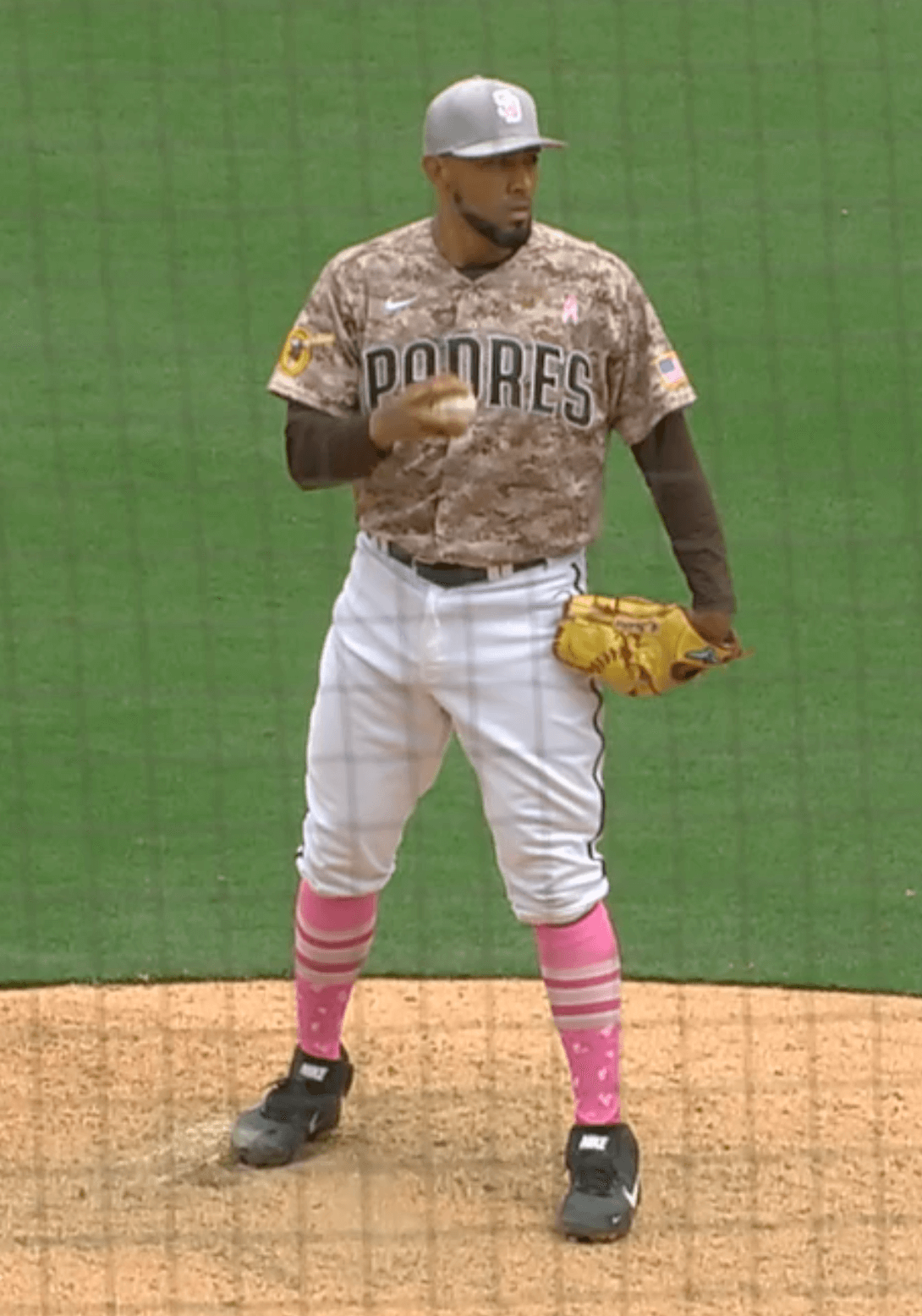 • Yankees outfielder Aaron Judge began the first game of yesterday’s doubleheader wearing pink socks but changed to conventional navy after making an out during his first at-bat: 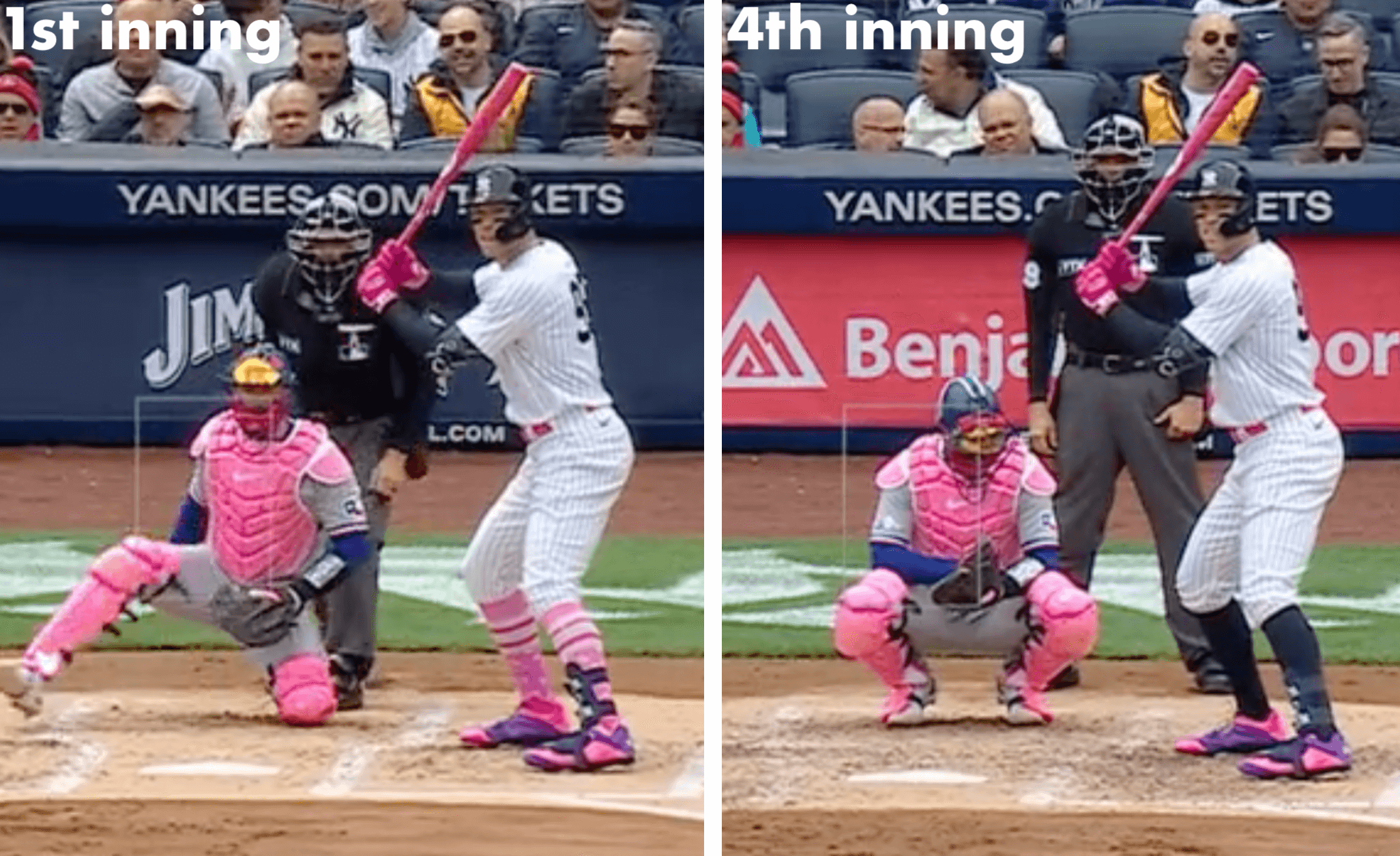 • Speaking of doubleheaders, there were two other twinbills yesterday — Mets/Phils and Orioles/Royals. In all three double-dips, both teams wore the pink gear for both games. (I’d been wondering if they might go pink for one game and non-pink for the other.)

Update: Reader/commenter Nate points out that the White Sox also had a pink helmet logo yesterday: 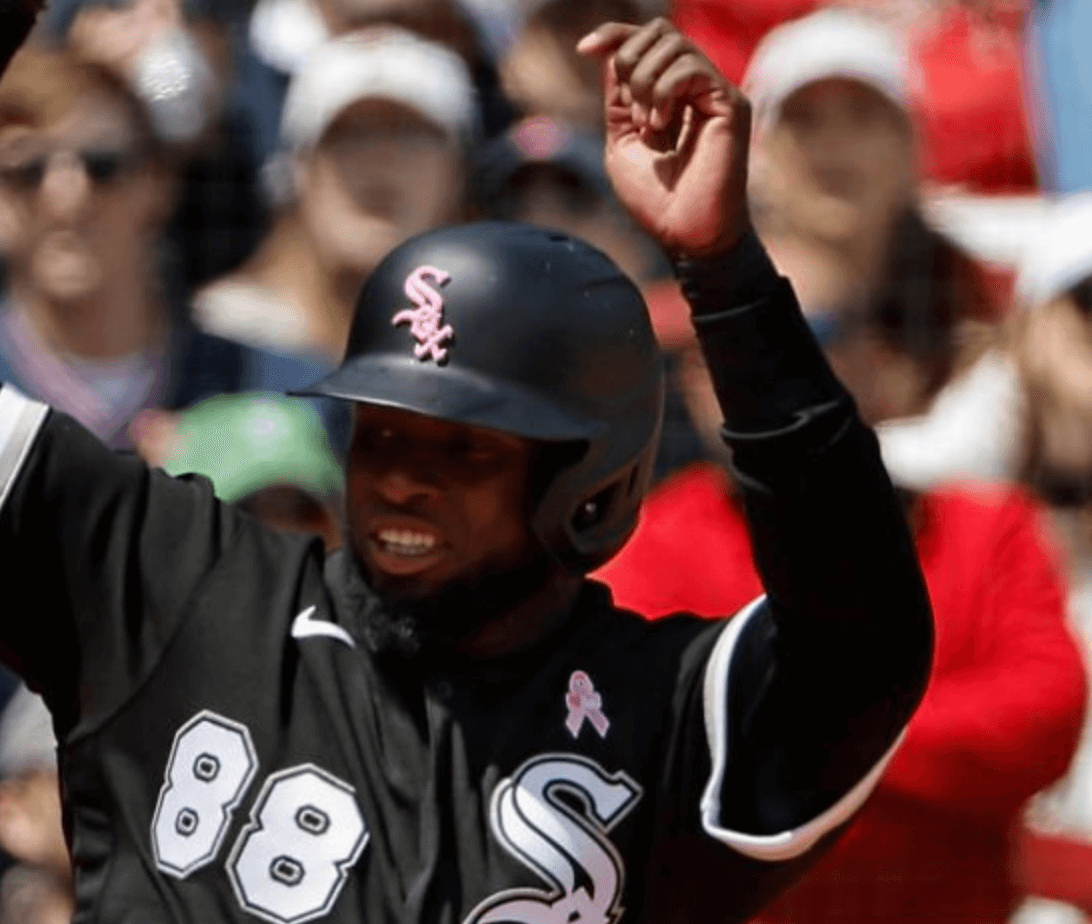 (My thanks to Trevor Williams for pointing me toward the Aaron Judge situtation.) 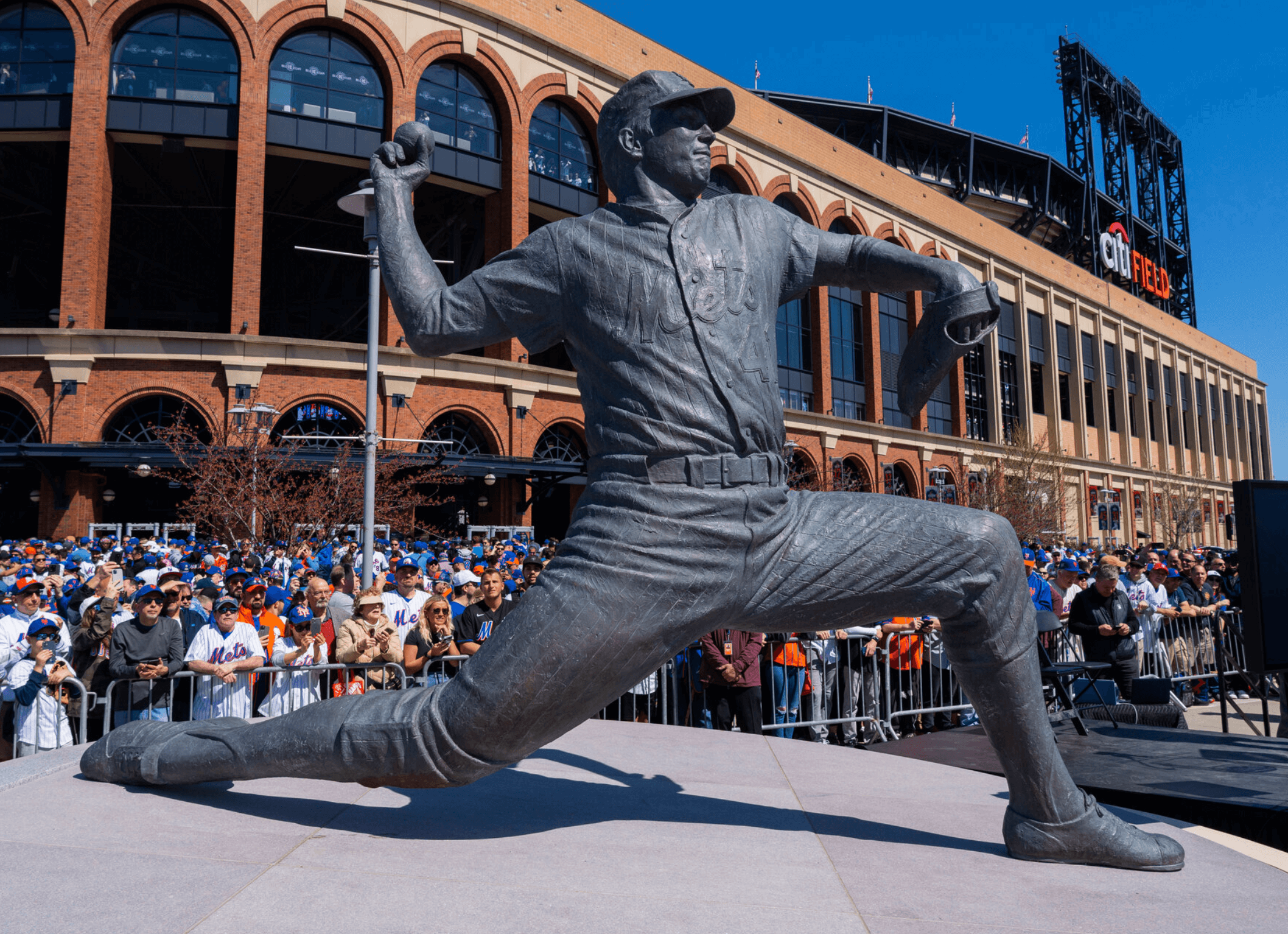 ITEM! Major uni-related exclusive: The Mets unveiled their Tom Seaver statue to much fanfare last month. But today I have a major scoop: The statue has a significant uni-related design inaccuracy that everyone missed, until a Uni Watch reader recently spotted it. I have an exclusive interview with the statue’s sculptor and lots of background info — it’s a fascinating story, and I don’t mind saying I’m really pleased with it.

I’ve put this story on Bulletin, but it is not paywalled — it’s freely available here. I hope you’ll check it out. 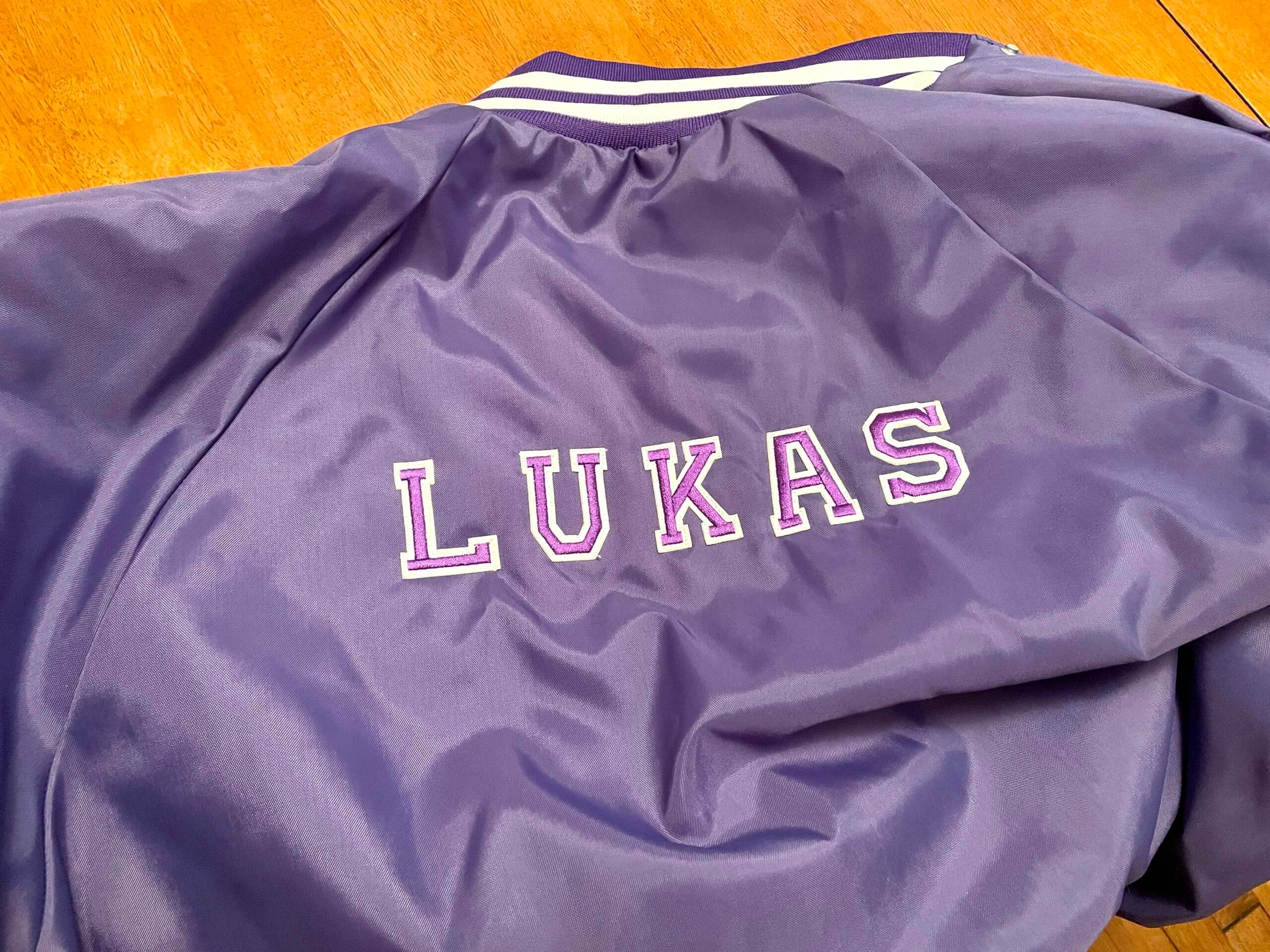 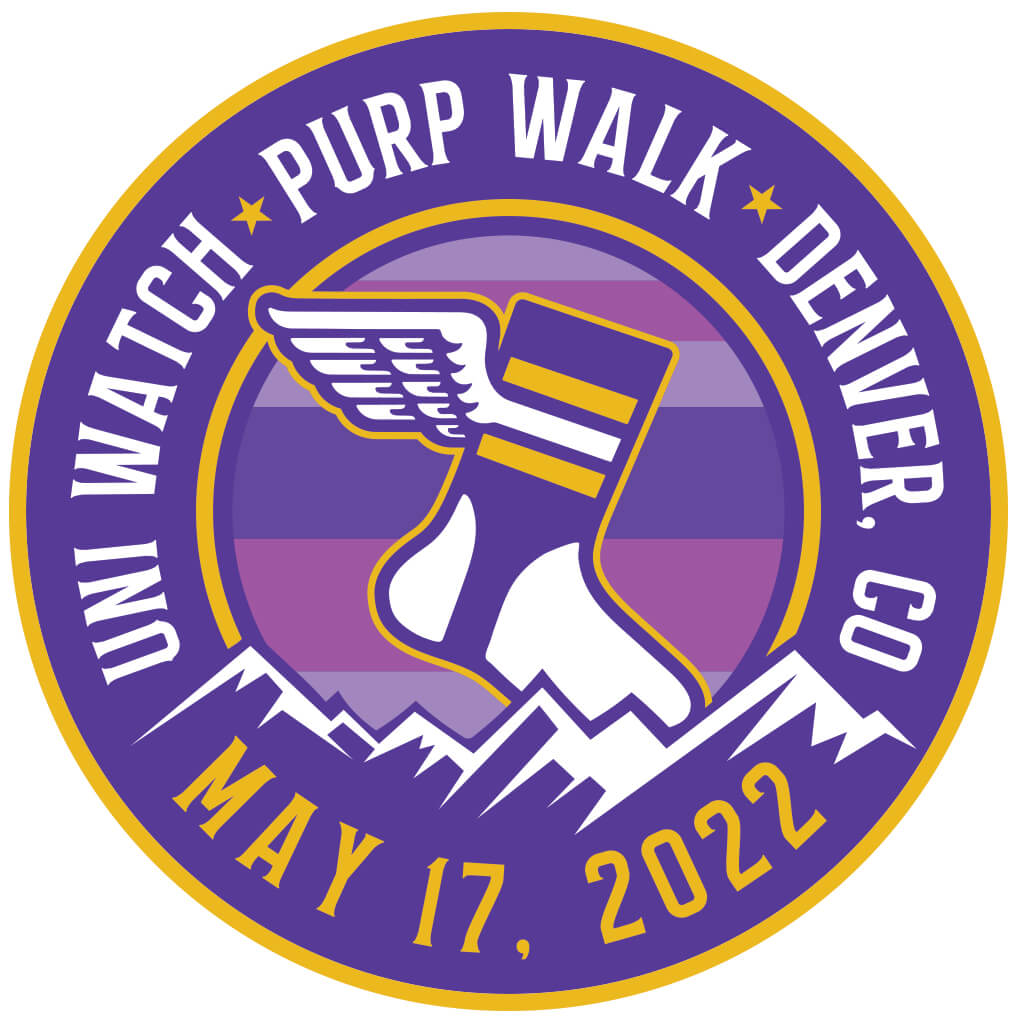 Purp Walk update: As you can see above, I’m continuing to gear up for Purple Amnesty Day. And in a new development, I’m excited to report that the Green Bay punk luminary and all-around obsessive genius known as the Rev. Nørb will be attending the Purp Walk festivities in Denver. Nørb, who I’ve known for years, is a serious fan of purple (he once tried to fuck with me by bringing three purple Bucks jerseys and some random purple items to a Uni Watch party in Milwaukee), so he’s decided fly in and join us in Denver. I look forward to seeing his purple outfit!

The Ticker
By Paul, pinch-hitting today for Jamie Rathjen

Baseball News: Mariners OF Jesse Winker has been wearing a white base-layer undershirt beneath his jersey over the past few days, instead of the team’s usual blue. He’s been doing it with at least three of the team’s jerseys — white, blue, and teal (from @garbage_mets). … Vendors at the Phillies’ ballpark wear the team’s distinctive number font on their work jerseys (from Steve Dodell). … An LSU pitcher had his fly open on the mound yesterday (Benji King). … A trivia question on Twitter yesterday revealed that former pitcher Bob Miller may hold the MLB record by having worn 15 different uni numbers during his big league career. … Plate ump Ron Kulpa had to leave yesterday’s Chisox/Bosox game after taking a foul tip flush in the mask.

Pro Football News: There’s a guy on TikTok who’s been doing really fun video recaps on the histories of NFL team helmets. Recommended (from Kyle Shaner). … The Jets honored a recently deceased Long Island boy by wearing his Little League number and his NOB at their rookie minicamp.

Hockey News: Kings G Jonathan Quick lost his glove during a scrum in front of the net last night and briefly had to play bare-handed (from Mike Chamernik). … Gross: The NHL has removed the playoff logos from the ice this season to make room for more paid ads (from Mike Lefko).

Apologies is this has been covered already, but I just noticed that the jockey who won the Kentucky Derby had a the logo of an insurance company running up the length of his pant legs. Ugh!

Is this something new?

Not new, unfortunately. Been going on for years.

Why can’t the NFL use the Plasti-Dip for their helmets to keep the one shell rule in place and make throwback’s a regular thing? Will the Plasti-Dip come off with a lot of contact? Always had been curious about this.

Anyway, the one-shell rule is now gone, so no more need to worry about that.

Maybe it’s good that it would chip off with contact. Otherwise, we could potentially see all sorts of terrible helmet designs for the sake of a “holiday”. Looking forward to some new helmets this year and beyond.

I’m being picky but as a stickler for details you may want to know that Ron Kulpa took a foul ball off of the mask as opposed to a foul tip. I snatched the below description of the two off the internet that describes the difference between a foul ball and a foul tip. The distinction is needed as a batter can strike out on a foul tip and runners can steal on a foul tip. I train our local Little League umpires and this is part of their training.

“So what is the main difference between a foul tip and a foul ball? It’s in the catcher’s hands. A foul tip is a pitch that is nicked by the hitter’s bat, goes directly into the catcher’s hand or glove and is caught before touching the batter, the umpire or the ground. Anything else is a foul ball.”

Paul, thanks for the link on helmet histories. I’ve watched about a third of them so far. Very informative and, as you said, fun. Thanks again!

I don’t know if this was common or not, but the logo on the White Sox helmet was pink yesterday. You can see it in the clip of Ron Kulpa getting hit in the mask.

I missed that — thanks! Will add to text.

Thanks for making the Seaver story a freebie. I had a sinking feeling and was prepared to get aggravated before I got to the last paragraph on the blurb. Great article!

How could anybody let the Padres take the field in that hot mess camo top/pink socks combination? Seriously, I can’t believe somebody approves that shit.

CBS Sports has a report based on Paul’s discovery about the Seaver statue and interview: link

Like you, I’m not a fan of faux “honoring the troops” como unis in any sport. However, if I had to name an exception it would be the Padres. With huge Navy and Marine bases in a relatively small pro-market, San Diego is arguably the most pro-military fan base out there. They also have been consistent, being one of (if not the) first teams to implement a camo design and it has been a regular part of their rotation going on 20 years. They get a pass in my book.