The hoodie thing is catching on. For the past month or so, Packers wideout James Jones has been wearing a hoodie on the field. Last night it was Giants defensive back Dominique Rodgers-Cromartie’s turn, as he wore a hoodie for the Jints’ game against the Vikings in Minnesota, where the temperature on the field was about 13 º (here’s how it looked from the front). Much like Jones, his hoodie was rendered in a team color and was therefore perfectly legal.

Speaking of Jones, he continued to wear his hoodie yesterday — even though the Packers were playing the Cardinals indoors.

• The Ravens wore their black alts. And hey, white pants!

• The Dolphins wore white at home.

• The Titans really need to stop with the mono-navy. Not a good look.

• I’m not a fan of the Lions’ uniforms (too much black trim, ridiculous number font), but their basic color scheme meshed very nicely with the Niners’ colors. Good-looking game.

• Speaking of good-looking games, the Cowboys and Bills were pretty easy on the eyes.

• At one point CBS listed the Bucs having a 1-0 lead over the Bears.

(My thanks to @RNs_Funhouse and Phil for their contributions.)

Raffle results reminder: In case you missed it on Friday, the results of the annual year-end raffle can be found here. All of the raffle items have been packed and addressed, and I’ll start shipping them today. Should have them all mailed out by the end of the week. 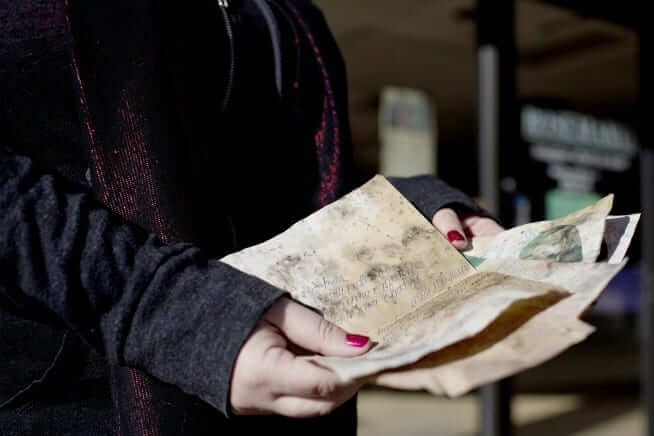 PermaRec update: The letters shown above were mistakenly dropped in a decommissioned bank night depository instead of a mailbox and stayed there for nearly 20 years until recently being liberated. Get the full scoop over on Permanent Record.

Gromm•It update: One of the best Christmas presents I received from the Tugboat Captain was this cool mini-grommet gun. I’ve already put it to good use, plus I’ve done a new normal-sized grommetization that’s v-e-r-y satisfying from a conceptual standpoint. Get the full scoop over on Gromm•It (now with fewer hyphens and more colors!).

Baseball News: Check out this early A’s BP jersey. That design was worn from 1980-82 (thanks, Phil). ”¦ Former A’s pitcher Catfish Hunter was the American League’s honorary captain at the 1987 All-Star Game and, for some reason, wore a gold snap-back cap.

College Football News: Here’s Baylor’s uni combo for the Second-Tier Uniform Outfitter Bowl. Rather absurd that both teams playing in that game are outfitted by a company other than the sponsor. ”¦ Who’s that in the mono-gold Golden Gophers uni? None other than Tony Dungy, wearing what appears to be a wristband in African American pride colors (from @RNs_Funhouse).

Hockey News: Here’s a good article on the Bruins’ and Canadiens’ jerseys for the Winter Classic (from Phil and Richard Grossman). ”¦ In a related item, looks like we’ve gotten our first look at a Winter Classic mask.

Grab Bag: DC United’s new kit may have leaked (from John Muir). … Under Armour CEO Kevin Plank is building himself a McMansion, much to the annoyance of his neighbors (from Tommy Turner).

Apparently. The commentators even mentioned it during the game. They said he must be wearing it for good luck or something since he didn’t need a hood indoors, and that he had cut off the sleeves.

Black jersey w/white pants is the best look the Ravens have. Very clean. Purple should be an accent color

Link to Tony Dungy pic reads “Afrian”. But the pic, the cheerleader outfit in the background, beautiful old school.

It is surprising that the only criterion for the hoodies is the colour. I would have thought that a hoodie would be against the rules on the grounds that the hood can be grabbed by an opponent.

But this then raises the question: is it legal to tackle someone by grabbing the hood? A player is allowed to grab an opponent’s shirt, is he not? Therefore, if this hooded sweatshirt is legal apparel, then perhaps grabbing it is legal, as well. That seems strange; but it would be inconsistent to deem a shirt legal yet not to allow an opponent to grab hold of it.

It surprises me also that the league is OK with the player’s name being covered.

It’s also legal to tackle a player by the hair when it protrudes, and that hair also blocks names. (In some cases, it even blocks crosses.)

It’s a really… odd rule. You can’t tackle a player by the back of the neck (horsecollar, 15 yard penalty), but you can grab a guy by his hair or a hoodie and it’s perfectly fine… even though the point of force and risk of injury is basically the same either way.

Former NFL ref Mike Pereira has explained fairly extensively that it’s NOT the same either way.

Yes, the rules say it’s different. But, really. How in the hell is pulling a player down by the back of the neck different if it’s a hoodie vs just the jersey? I’d love to see something resembling a scientific explanation about that.

So… is it likely, then, that the rule is not about safety but passive-aggressive conformity to a certain look that might be more appealing to monied sponsors? Long hair, hoodies, etc. don’t look too corporate.

“The Rickey Rule” was easily more about controlling the brand than anything else, but when Tory Polamalu’s hair should have been an issue, he was not bothered too much because he projects the image of a well-mannered person.

If I had to guess, I’d say it’s because the neck of the jersey is a standard uni element, while hoodies and long hair are not. You can’t make a new rule for every new accessory that comes out and punish people for not knowing what would be long complex rules about what you can grab and what you cannot. Players know they can’t be tackled by the collar, and know if they want to wear a hood or long hair, they do so at their own risk. If they have a problem with it, get a haircut or wear a crew neck.

Long hair and hoodies are narcissistic flourishes that have the potential to hurt the TEAM when you get tackled because of them.

And we know from Polamalu that it does happen.

(kind of funny that they do cover up the name though!)

“kind of funny that they do cover up the name though!”

And in Polamalu’s case, the cross too…

Who’s that in the mono-gold Golden Gophers uni?

Also conveyed in that picture of Mike Condon, his trapper is CCM instead of Reebok. It’s the difference between the Chevy Suburban and the GMC Suburban (to say, little or none), but kind of surprising that anything Reebok that isn’t a jersey even sticks around for this long.

Cowboys / Bills might’ve looked good in pictures, but watching it live it was hard to distinguish the two teams at times- same with the Colts/Dolphins. Bad enough that I kind of wished they went color rush for those games instead.

Funny how those are the sort of games we take for granted. As long as the players on the field can tell the teams apart, I guess I don’t have a right to complain.

Well, yeah, the players and the refs, I suppose. As a viewer though, it felt like the field was being whitewashed every snap (especially the Dolphins/Colts) and made me think of those ‘this is what the Bills/Jets Color Rush game looked like to the colorblind’ screengrabs that were being shared a few weeks back. Pretty tough to watch, but obviously okay for the players/refs.

Wouldn’t a 49ers v Lions game be (just about) beautiful if each team wore their standard ‘home’ uniform?

Yes. Yes it would.

Only if the Lions went back to a uniform without that nutty font.

Just wanted to give Paul and the people at Teespring a big thank you – I wore my ‘Ugly Sweater’ sweatshirt several places during the season, and it brought smiles to just about everyone who saw. Several nice comments about it also! Shirt of the year!

Fuck — yes. That’s what it used to say. Then I tweaked a few things and apparently messed up that part. Will fix now. Thank you!

Harry, how’d you have trouble distinguishing the Bills & Cowboys? I thought they looked phenomenal, especially under the clouds and rain in Buffalo. Great looking game!
P.S. The hoodies look so fucking amateur.

When the ball was snapped, there was just a lot of white moving around on screen- the Cowboys pants and helmet are also very light, and the only dark color (blue) is similar to the primary dark color on the Bills uniform, so it was a bit of a blur. Definitely looked good in photos where I’m not trying to distinguish one team from the other, but wasn’t much fun to watch, visually.

It’s your site, do what you want with it, and I’ll keep reading every day regardless, but this grommet stuff is just…bizzarre.

If it were normal, there’d be no point in doing it.

For those who prefer to have things spelled out, I provided a crib sheet of sorts last Friday. Scroll down:
link

“If it were normal, there’d be no point in doing it.”

Paul – this may be a quote to live by

It doesn’t apply to every situation one encounters in life, but it generally applies pretty well to creative enterprises. The whole point of art and creativity are to explore, do something new, etc.

Or as one of my heroes once said, “Do something original or SHUT THE FUCK UP.”

A 35,000 sq. ft. house built on a 65-acre lot hardly qualifies as a “McMansion”: not only is is sui generis, but it’ll occupy maybe 1/2 of 1% of the property’s acreage. McMansions, by commonly-accepted definition, are cookie-cutter large homes crammed into zero-plot line lots barely able to accommodate them.

Not to mention, so fucking what? Save for the protests of a self-proclaimed “preservationist” neighbor whose lineage traces to the colonial era, there’s no indicia of community outrage or “annoyance” with the project, and by all account Plank is compliant in all construction, environmental, etc., respects. Talk about a non-story…

Yes, not a McMansion.

was going to come and post this same thing. I think this qualifies as just a “mansion”

“Speaking of good-looking games, the Cowboys and Bills were pretty easy on the eyes.”

I agree totally, and I really do think that this shows that the best-looking games incorporate a fair amount of white. White, simply put, is literally “easy on the eyes” while even colors that go well together like dook’s royal and Indiana’s crimson, venture into eyesore territory when there is little or no white to be found. Combine that with a green background and you’ve got a lot going on for the eyes to process.

So if we MUST have “color vs. color” jerseys, then it should be mandated that white or at least light pants we worn.

Remember, the best-looking color vs. color game of the season was the UNC vs. USC game at the beginning of the year because the Heels wore a light jersey compared to the Cocks’ dark ones and both teams wore white pants.

That hoodie that Dominique Rodgers-Cromartie is sporting looks about as bad as the color rash unis.

If players are getting fined for violating sock and untucked shirt rules, how do they get away with looking like Rocky?