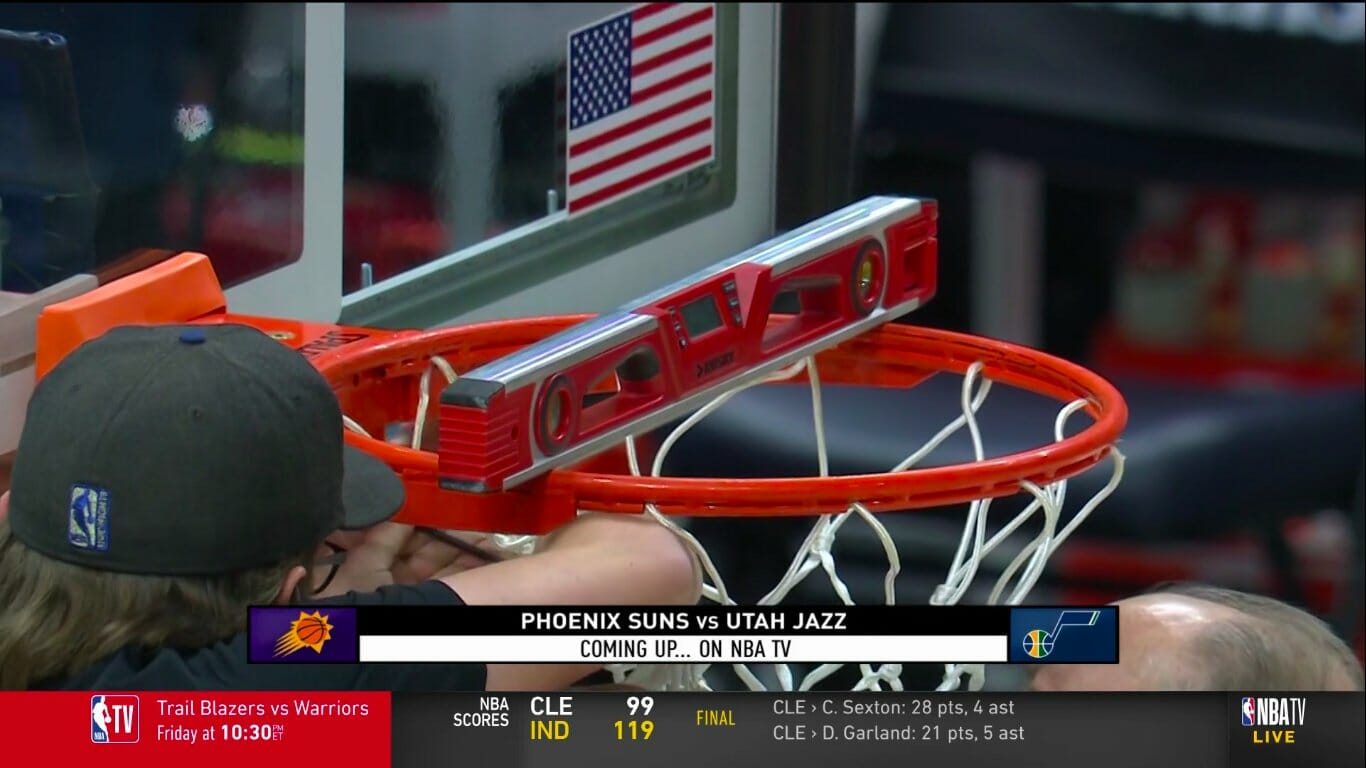 Happy New Year! Greetings from Uni Watch HQ, where we’re all happy to have turned the page on the calendar.

But before the ball dropped at midnight, 2020 still had one little bit of sand to throw in our gears, as the start of last night’s Suns/Jazz game in Utah was delayed because — get this — one of the rims wasn’t quite level.

A quick bit of research reveals that something similar happened during a Clippers/Rockets game almost exactly a year ago, and also during a Nets/Raptors game in the spring of 2018, so this isn’t unprecedented. Still, something about it seems v-e-r-y 2020, no?

On the plus side, I love just about anything that calls for the use of a level, and I love even more that they have levels on hand at NBA games for just this type of situation.

Update: Just learned that the reason the rim had to be checked was that there was a broken cable on the backboard, so there was even more weirdness than I realized! Here:

Welp, the cable is broken on a backboard. So we wait… pic.twitter.com/O0udbIRQwd

(My thanks to Mike Chamernik for letting me know about this one.) 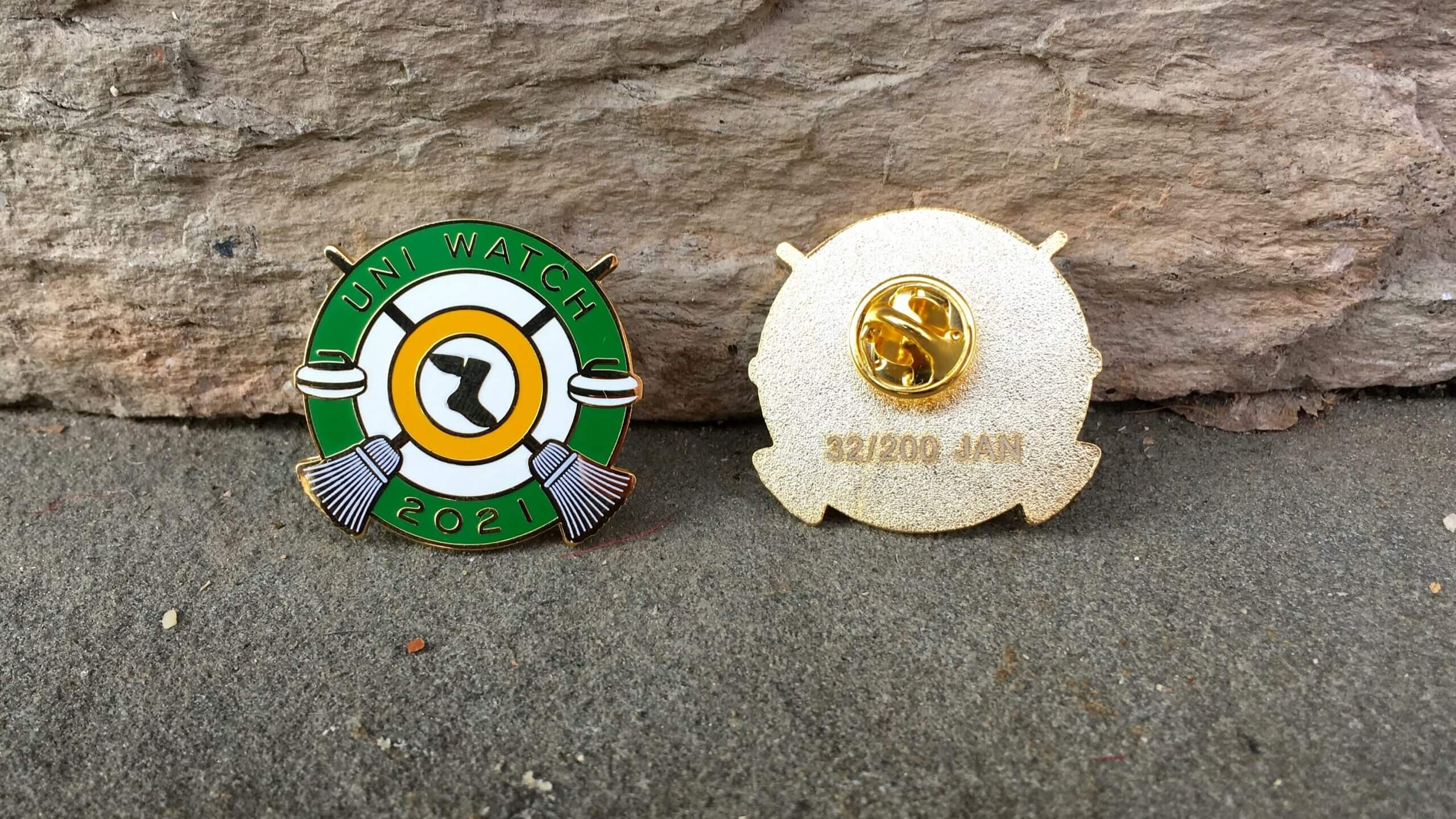 January Pin Club launch: The first day of the new year means it’s time for the Uni Watch Pin Club’s first pin of 2021. We’re going with a curling theme this time around — highly appropriate, since curling has a rich history of decorative pins.

Also: As you can see in the photo above, this pin includes the words “Uni Watch,” but not “Pin Club.” That’s a change that designer Todd Radom and I have made for this year — all pins will include “Uni Watch” and the year on the front, with the month continuing to appear on the back. “Pin Club” will no longer be included.

This is a numbered edition of 200 pins. You can order yours here.

Just like last year, we will have some sort of bonus prize for people who collect ’em all. (Speaking of which: If you collected ’em all in 2020, you’ll be receiving your bonus pin later this month.)

Thanks so much for your support of this project — it’s been very creatively satisfying for both Todd and myself!

College Football News: Tulsa wore a stars-and-stripes helmet decal for yesterday’s Armed Forces Brawl Bowl (from Blaise D’Sylva). … During the Liberty Bowl against Army, West Virginia wore a flag-desecration helmet logo, except for LB Josh Chandler-Semedo, who had the team’s normal logo (from multiple readers). … The Northwestern coaching staff will wear shorts during today’s Citrus Bowl (from James Gilbert). … Here’s what Oregon will wear for the Fiesta Bowl.

Hockey News: Unique Sharks logo on D Erik Karlsson during his press conference. Never seen that before (from @DoubleA_Ron_Yo). … New Avalanche D Devon Toews will wear No. 7. … Gotta love the maple leaf-themed socks that Canada is wearing at the World Juniors (from Doug Kalemba). … The Senators have restored their old 2D logo to center ice (from Wade Heidt).

NBA News: The NBA is requiring players to wear contact sensors during practice and team travel. The sensors will make a sound when players are within six feet of each other. … During a first-season episode of The Office, Dwight Schrute (played by Rainn Wilson) wore a plastic face mask during a company basketball game. The Office Ladies, a podcast covering the show hosted by Office actresses Angela Kinsey and Jenna Fischer, says that writer Greg Daniels had Schrute wear a face mask due to Daniels’s fandom of Allen Iverson, who once had to wear a plastic mask during games after a broken nose. Check the 40-minute mark of this episode for details (from Todd Usher). … The Rockets debuted their “H-Town” City alternates and matching court last night. 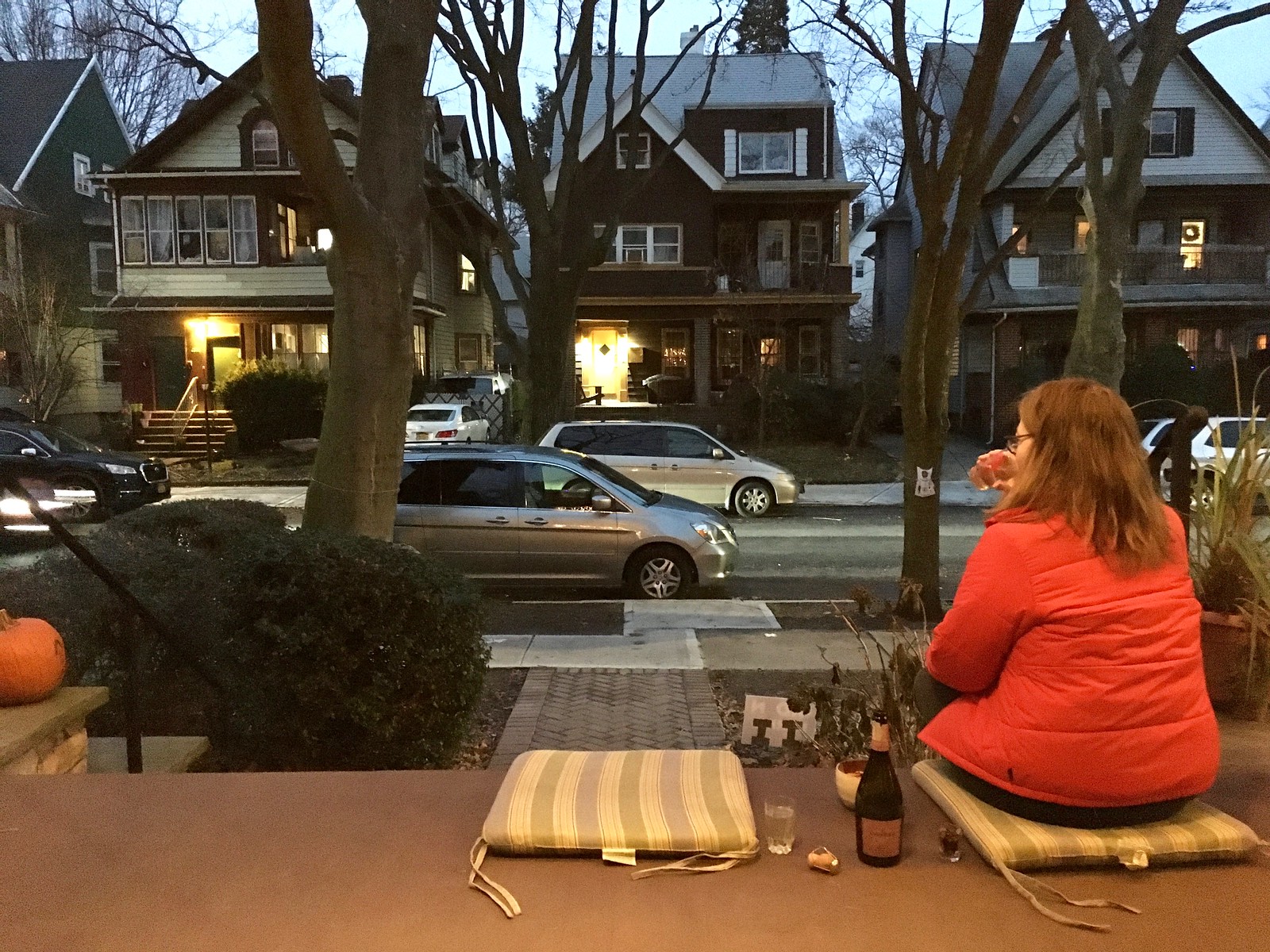 What Paul did last night: Since it was New Year’s Eve, we popped the cork on a bit of the bubbly for yesterday’s porch session. Some friends joined us a few minutes after I took this photo, so we had a nice little socially distanced party.

As always, you can see the full set of daily Pandemic Porch Cocktails™ photos — now 290 of them — here.

Happy New Year to the comm-uni-ty! May we all be able to recognize which team is which this year.

Loving the red alternate uniforms for Canada in the World Junior Hockey Championships. Better than their usual dark jersey which has too muck black. Also better than the previous alternate which was a black uniform.

Though these are the “alternates”, they have become the primary look when Canada wears dark so far in the tournament.

We had seen the jerseys a long time before the tourney started, but it was a surprise to me when they skated out with the maple leaf-themed socks when the tournament began.

Not the first time a Canadian national team has worn maple leaf-themed socks. I think back to the 1990 Women’s World Hockey Championships and Canada’s pink uniforms.

Wishing a very Happy New Year to Paul, the Uni-team, and everyone in the comm-uni-ty. Here’s to a great 2021.

Thank you Paul and team for great content that helped get through 2020.

First off, happy new year to all of this community, it has been a daily dose of relief not just this year, but every year.

With that being said, may I pick some nits? Certain phrases that have become normal drive me crazy. “to be honest with you.” oh, you normally aren’t honest with me? “Almost exactly.” What does almost exactly mean?

Again, I am nitpicking. I love your writing and most of your opinions. This is just a little rant from an OCD reader. But I Get It.

Hi, Jon! Forgive me if I’m missing something, but I’m confused — “to be honest with you” doesn’t appear in today’s post, does it? Is it a phrase I’ve used a lot? If so, I wasn’t aware of it!

That said: Sometimes I use “honestly” just to make it clear that I’m not being sarcastic or snarky. But if it’s a rhetorical crutch that I’ve leaned on too often, I’ll try to be more aware of it. Thanks!

No, my apologies, I was simply lumping one phrase with the other as another example. I’m all good with someone saying “honestly,” especially when they’re expressing their opinion. My nitpicking was more about the crutches of starting conversation with phrases such as “to be honest with you.” “Almost exactly to the day,” to me, falls into the same category.

I feel that the “exactly” in “almost exactly” can be important rhetorically.

Now, saying something, were, “almost exactly 4,544” would not necessitate the word “exactly.”

That curling pin! I’d wear that!

In honour of the Uni Watch January Pin, I give you some curling houses (the rings) in green and yellow.

Not curling rings but considerable green and gold in the ‘letterhead’ of the Port Arthur Curling Club site:

Happy New Year to all in the comm-uni-ty. Glad to put 2020 in the rearview.

Bearcats look like shit in the Peach Bowl. Most of their players are showing their base layers, be they black, white or red. In fact, one player is showing more of his white base layer than jersey! To be fair, a small portion of the Georgia players are also following this ridiculous trend. Thankfully this season is almost over and we can look forward to the next aberration in the fall.

On the Twitter video of the backboard, the Tissot game clock on top of the backboard had: the game clock, the 24-second shot clock and another clock that was counting down. What is that 3rd clock for and is it activated during the game? Also, there is also a 3rd clock on the stanchion facing sideways, but while the one facing the front was counting down, the one on the side was not.

I think it’s a timeout countdown.