@UniWatch @PhilHecken Donnie Jones just went out to punt with SWEAT PANTS on. That’s made up for how bad Nick Foles has played. pic.twitter.com/lzqk1w3SGb

Happy 2018! The uni-verse wrapped up the year with a hilarious moment yesterday in Philly, as Eagles punter Donnie Jones came out onto the field without realizing he was still wearing his sideline sweatpants. He suddenly recognized his mistake and removed the pants while in punt formation (see above) and then performed his duties without further incident.

• Rare throwback-vs.-throwback game in Miami, as the Dolphins and Bills both went retro (additional photos here):

• Good-looking game in L.A., as the Rams wore their throwbacks against the Niners (additional photos here):

• The Titans wore navy blue over powder blue. According to the Gridiron Uniform Database, the last time they wore that uni combo was in 2007:

Update: As several commenters have pointed out, they wore this combo once earlier this season. My bad.

• The Chargers went mono-navy yet again. Not a good look.

• Here’s a list of players who protested during the national anthem.

(My thanks to Blake Fox for the Donnie Jones video.)

Winter Classic goes 3-D: The Rangers and Sabres will face off in the annual NHL Winter Classic today, and the Buffalo players will be wearing something new — 3-D helmet wordmarks (click to enlarge): 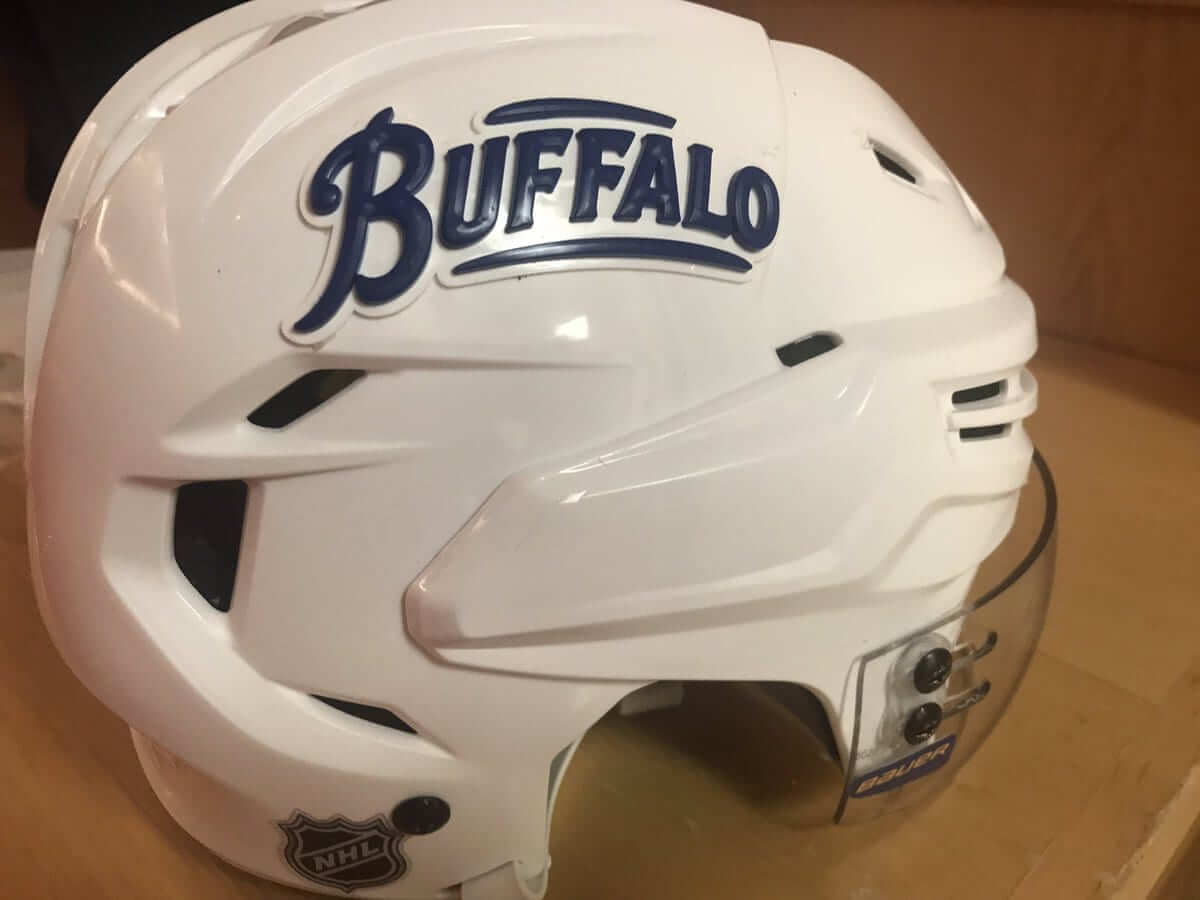 That’s it for today. Enjoy your New Year’s festivities and we’ll see you back here tomorrow. Peace. — Paul

Dear Dolphins and Rams:
This is how you should look, all the time.

I agree wholeheartedly. Nothing quite pops like the classic blue and gold mid 1970’s-1990’s Rams unis. Same goes for the Cszonka /Griese era Dolphins duds. Classic, clean and iconic.

Pretty much every team should go back to what they wore in the 1970’s.
Just about every “improvement” has made the teams look worse.

I agree Josh, wish they were those more than navy pants with white jerseys

Possibility they may? We will have to see in 2018. This is the swan song for these Titan uniforms. New ones coming in 2018.

According to controlling owner Amy Adams about the change, “It’s not minor. It’s not a total color change or anything like that. I think everybody is going to be very pleased with where it went.”

“Like with a lot of changes around here, we were due a change…”

I’d love to see the Titans adopt the baby blue and red of their predecessor Houston Oilers.

Yep. Here is a photo from that game:

I almost forgot how fantastic the older Dolphin uniforms are.

I would love to see the Bills ditch the stripe on the helmet that gets wider in the back. Sunday’s look was much better. Buffalo ditched most of the gimmicky uni elements in 2011. Take one more step toward the clean and straightforward.

Stoke vs Newcastle (10am EST, 3pm BST) will be a stripe-fest!

Never mind; Newcastle will wear the sky blue away kit.

Hope the Titans keep it going with the navy over light blue. Two Tone!

Happy new year and thank you for all you do. Best of luck keeping up with all the crazinees the new year will bring.

Does snow on the ice, such as the game at Ralph Wilson this past weekend/year affect the play of the game?

Absolutely – I watched the last half of the US/Canada game at The Ralph. At one point the commentator compared the quality of play to watching 5 year olds play an intermission shinny game. I saw one player competely skate over the puck because there was too much snow against the Board.

It was still a whole lot of fun to watch, and I’m not sure the deterioration of play is a whole lot different than when there’s a snow game in football, although I will say it takes less snow to impact hockey.

Very much so; Snow is debris on the ice, slows the puck down. If it’s snowing during an outdoor game, they will have the ice crew shovel the snow off after every stoppage of play

Have a blessed new year.

Arsenal wore red shorts with their red shirts for the first time since the 1970s against West Brom yesterday.

The PL/FA seemed their standard home kit as a kit clash with West Brom’s home strip and, since the Baggies were the home side, Arsenal had to change. Apparently the red shorts met the criteria but it made for an odd matchup.

Frank Gore wore his socks down at his ankles exposing his whole lower leg. This isn’t the first time either, he did it with the 49ets too.

Re: the Bill’s “throwbacks”
This: link
or even this: link
is not the same as: link

Ahhh, complaining and hotlinking – I’m starting the year off right!

The 49ers-Rams game was the BEST looking game in the NFL all season. There is something about that pairing of uniforms that is perfect. The all-throwback game between Miami and Buffalo was cool but those Bills uniforms lack color. Felt very bland. The Miami throwbacks are absolutely stunning though, it would be great if they brought them back. The current uniform lacks orange and helmet could use a different face mask, the white is dull. Make it aqua and they might have something. But here’s something to think about for those worried about the color rash hitting the Dolphins’ throwbacks. They could easily do another throwback as the color rush to the late 1990s/2000s aqua with the shadow numbers. The actually went all-aqua on a Monday night back when we started seeing the mono look in the early 2000s.