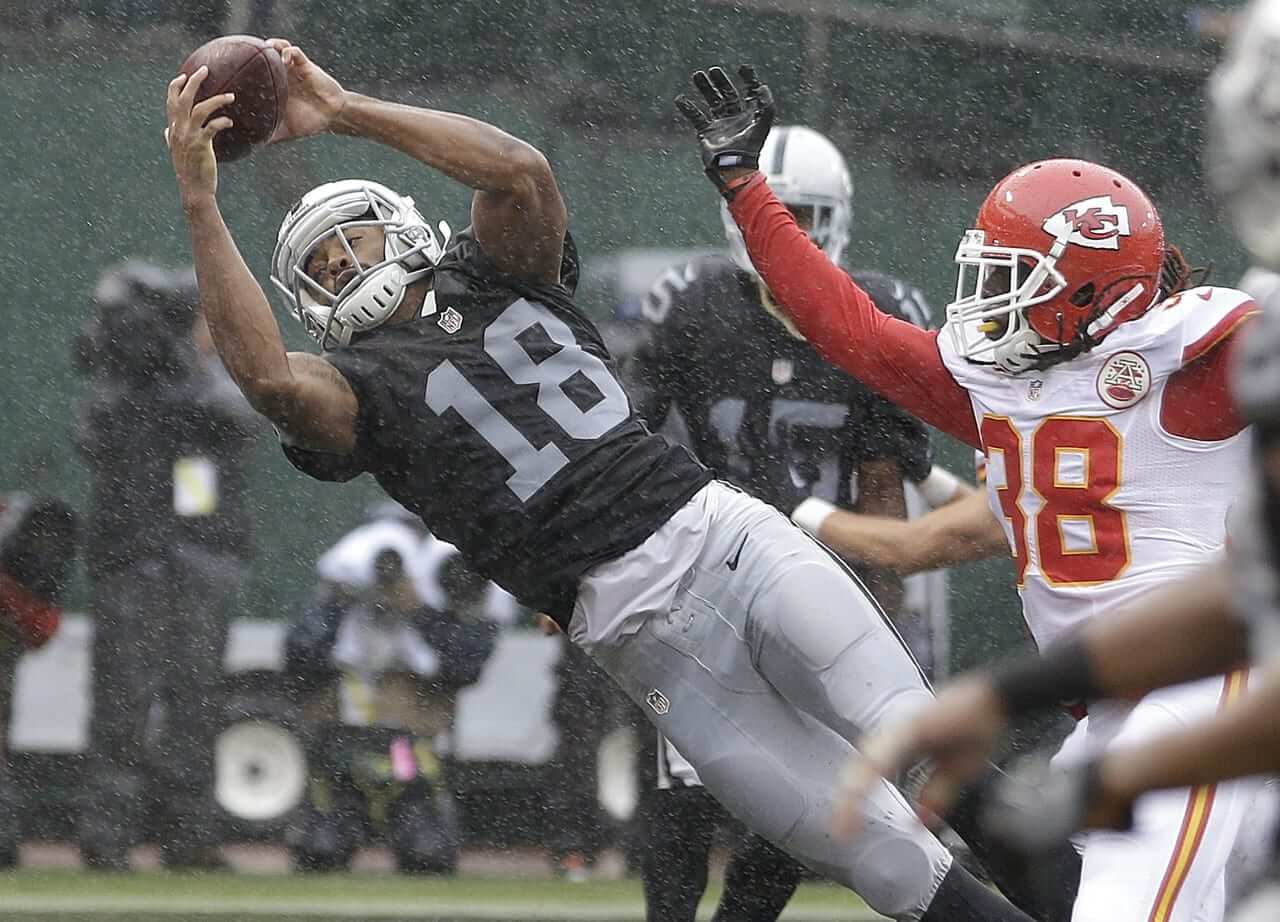 Ah, is there anything more visually satisfying than a football game in the rain? That was the situation yesterday in Oakland, as the Raiders and Chiefs faced off. How soon can we get a snow game?

Also of note in that game: For the second straight week, the Chiefs eschewed their red pants and instead went mono-white. But instead of wearing their red-topped socks, which they’d worn last week, they went with their white socks. Here’s a comparison — last week’s on the left, yesterday on the right (click to enlarge): 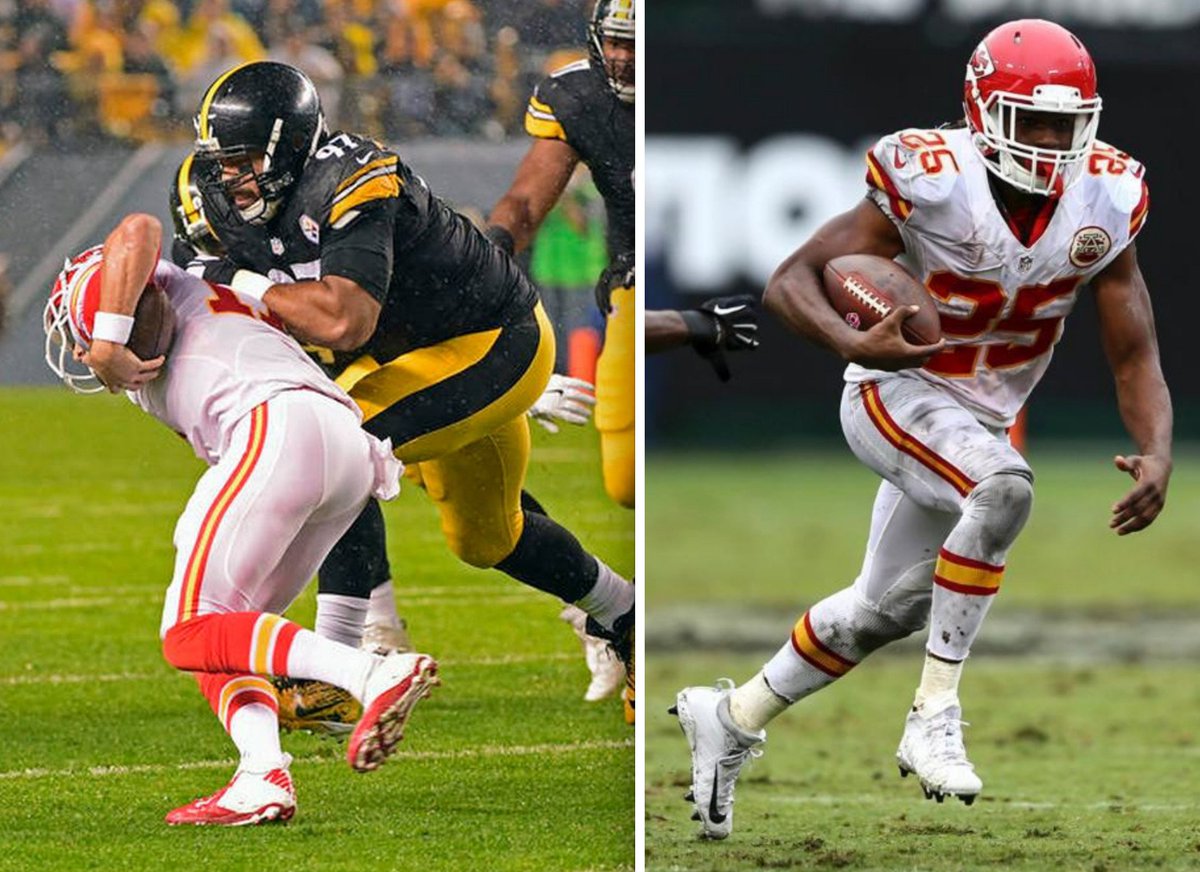 According to the mighty Gridiron Uniform Database’s listing of Chiefs uni history, the Chiefs always wore the white socks when going mono-white from 1989 through 2013, and then they switched to the red-topped socks last year. (They didn’t go mono-white in 2014.) Now they’ve used both styles this season. Make up your minds, people!

•  The Packers wore their throwbacks. Unfortunately, as you can see in that shot, they’re still inexplicably using their green facemasks. Grey or navy would be much better. (Meanwhile: The throwback theme extended to coach Mike McCarthy’s sideline attire.)

•  Another week, another NOB typo, this time for Jaguars cornerback Prince Amukamara: 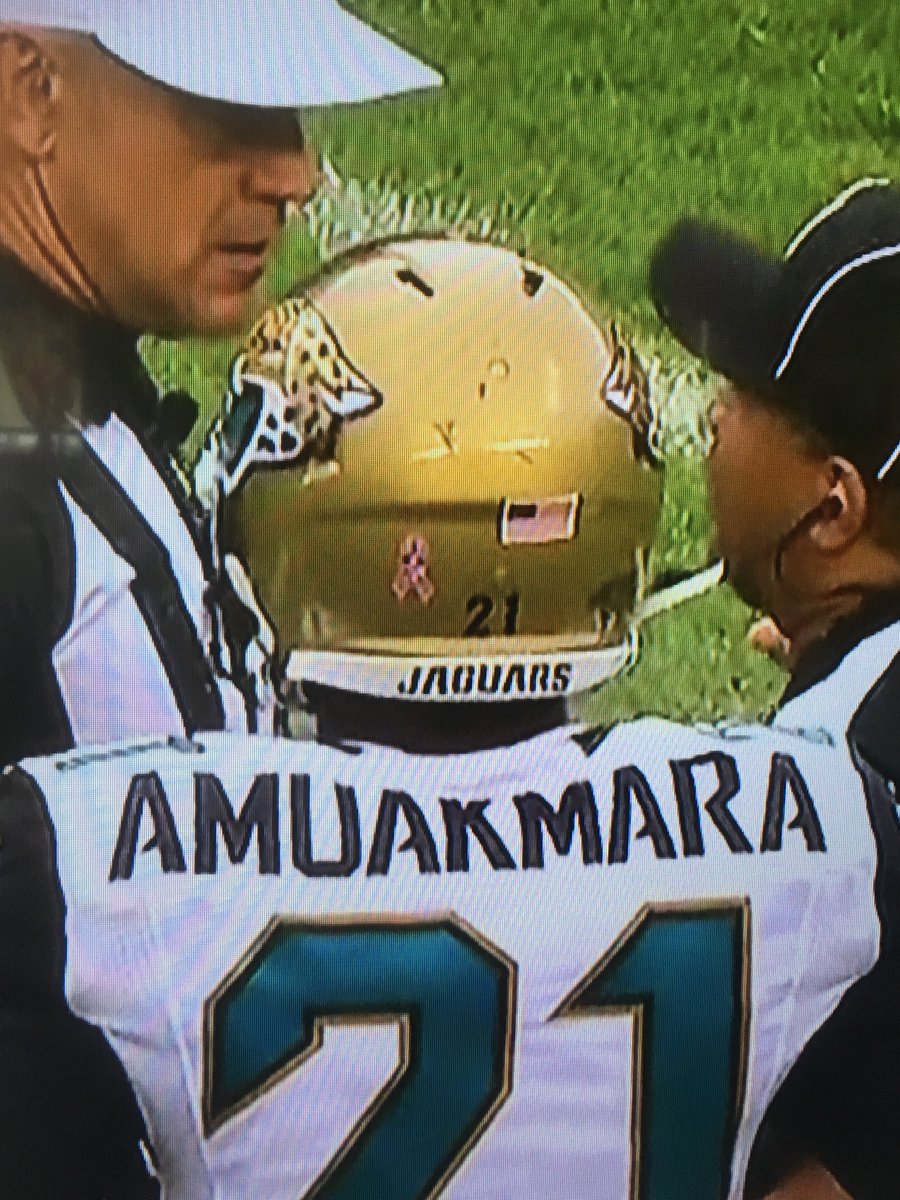 •  Eagles quarterback Carson Wentz emerged from a sack with his jersey badly torn: 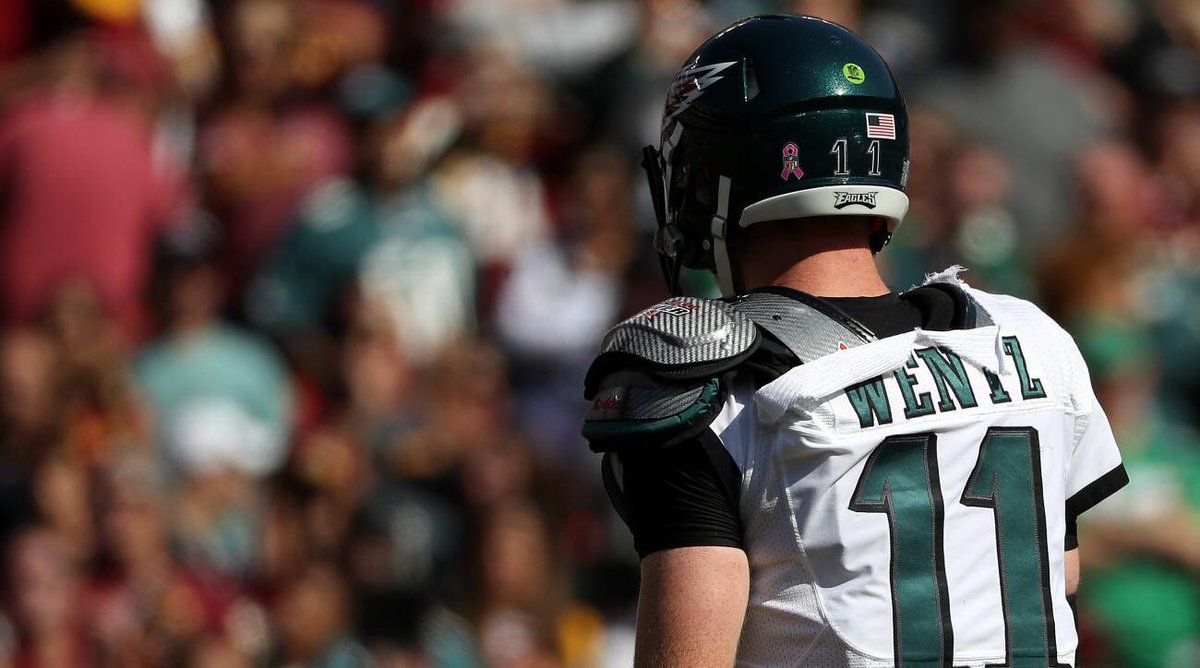 •  Brutal graphic by Fox, which clumsily Photoshopped Vikings quarterback Sam Bradford’s head onto Teddy Bridgewater’s body, complete with Bridgewater’s two gloves and shorter sleeves. I don’t understand how something like that happens. Was it really easier to create the Photoshopped image than to just find a decent photo of Bradford? (Deadspin helpfully pointed out that this wasn’t even the first time Fox has used this same bogus image.)

•  Speaking of Fox, they also momentarily showed a Telestrator test during the 49ers/Bills game.

•  Two teams wore white at home: the Saints (that game also marked the first 2016 appearance of the Panthers’ black jerseys) and Dolphins.

•  Speaking of the Dolphins: When they wear their aqua pants, they usually wear their blue-topped socks, to create a point of sock/pant contrast. But yesterday they wore the aqua pants with aqua-topped socks, creating the dreaded leotard effect. (The best solution, of course, would be to revive the team’s old striped white socks, which unfortunately don’t exist in the team’s current uni set.

•  The NFL’s new social media policy, which went into effect last Wednesday, forbids teams from posting highlight video footage or GIFs on Twitter. The Eagles and Browns took some creative liberties with the new policy, which just goes to show that there’ll always be a place for electric football.

•  Many players on assorted teams continued to protest during the national anthem. There’s a rundown of all of them here.

(My thanks to all contributors, including Ron Amadeo, @cmray5, Robert Hayes, Trey Volk, our own Alex Hider, and of course Phil.) 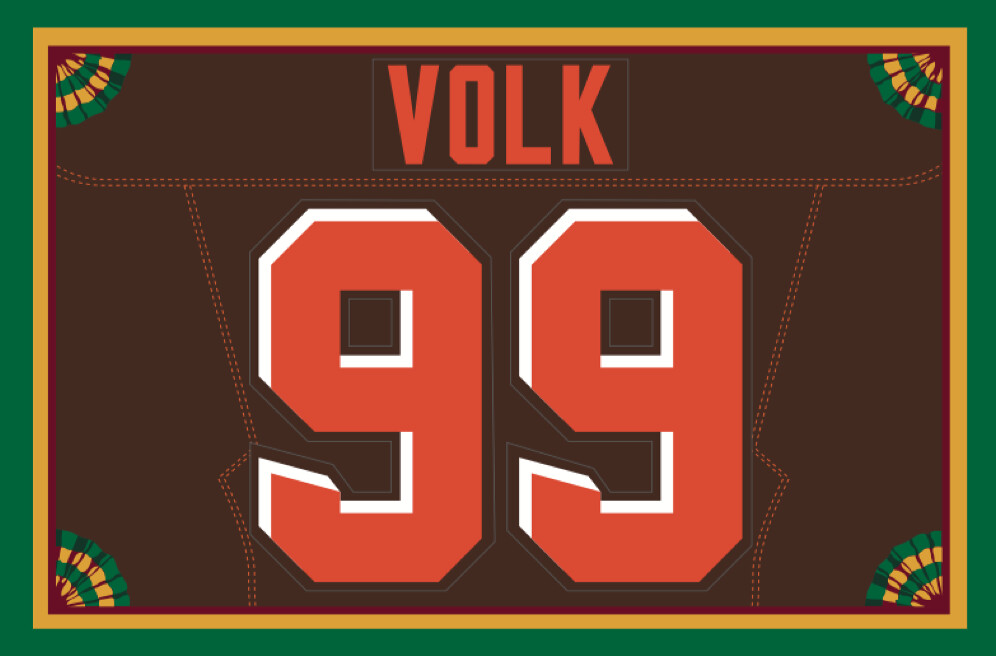 Membership update: A few new designs have been added to the membership card gallery, including Trey Volk’s Browns treatment (shown at right; click to enlarge). As you can see, membership card designer Scott M.X. Turner did an outstanding job of capturing the Browns’ top-stitching. Just another example of the truism that the worst-looking uniform elements often look really cool on a Uni Watch membership card.

You can order your own custom-designed membership card here, you can see all the cards we’ve designed so far here, and you can see how we produce the cards here.

College Football News: Interesting note from Ohio State: Apparently, the Buckeyes didn’t issue any single-digit numbers in the 1950s, and very few in the ’40s and ’60s (from Mike Knapp). … Looks like Montana has some new helmets (from Benjamin Goble). … Independence Community College in Kansas has some pretty wild unis (from Tom Crittenden).

Basketball News: A Target store in Sacramento put together a soda display of the Kings’ new logo (from Grant). … This NBA shoe guide was spotted at Spurs headquarters in San Antonio. The money quote: “No flashing lights or other adornments.” Also, who knew players had to be told to wear matching shoes? (From Hit the Glass.) … A couple of Minnesota Lynx players were wearing Prince tribute shoes in the WNBA Finals yesterday (from F.K. Yaaj). … Here’s the championship banner that the Cavs will be hanging at their arena (from our own Mike Chamernik).

I’ll be tending to a family matter today. Play nice while I’m away, okay? Okay.

Odell Beckham was among the players wearing custom cleat. He choose Kirby
link

I think the Browns unis are growing on me.

You should probably see a doctor about that, or at least pick up an anti-fungal spray from your local Walmart.

aww come on, from a distance they look alright. Can’t even notice the stitching. As long as they do the color combos right and not that brown on brown, they look fine to me. I even don’t mind the “BROWNS” running down the leg (haha)

I agree.As long as they don’t go brown on brown they still the best looking team in the division thanks to the block number font.

Nike has a series of shoes called “What The” which are mismatched shoes containing various prints or patterns from the line. Signature players such as Kobe, Durant and Lebron have had multiple versions of the series.

Also, I remember growing up in Chicago in the 90s people would wear Jordan’s in two different colors to prove they had enough dough to have multiple pairs.

Just a couple reasons why the NBA may feel the need to tell players their shoes need to match.

Wearing two mismatched Chucks was a thing when I was a teenager in the 1980s. It was usually paired with (and went out at the same time as) wearing multiple polo shirts with popped collars.

Wait, those went out of style?

No, no, no. You’re OK. Put your collar back up. Any one of those things (multiple polos, mismatched Chucks, popped collars) are totally fine, you just can’t do them all at the same time.

Definitely prefer the white Chiefs socks, due to both precedent and aesthetics.

For the Dolphins, I love the aqua socks with blue tips.

Precedent is a tricky thing. Prior to 1989, they usually wore the red-topped socks when going mono-white.

Photo from Super Bowl I:
link

Are the Raiders’ numbers no longer outlined in black, which was new for this year?

Ah, is there anything more visually satisfying than a football game in the rain?

Yes: A football game in the rain on a dual-purpose field with infield dirt; a football game in the snow; a baseball game in the sun with flannel uniforms; a political candidate speaking from the back of a train; Manhattan or downtown Washington, DC, in a blizzard; the honor guard at the Tomb of the Unknowns at night or in any precipitation; a passenger train anywhere in Scotland …

In the first Dolphins photo, Ryan Tannehill appears to be using three different things to create the appearance of a striped sock. Seems like wearing actual striped socks would be easier.

The aqua layer is probably a legging/tights type of thing. So putting the white socks and dark blue sock trimmings over are just to meet the uniform guidelines. You can see in the same picture a few of his linemen are not bothering with the dark blue trimming.

My favorite story of a person trying to make peace at Wrigley was former White Sox center fielder Aaron Rowand, who always wore a Bears t-shirt under his jersey to show Cubs fans who would heckle him during inter-league games.

Paul, what are the odds on whether or not the ALCS game tonight will look like a Spring Training game?

Throwbacks should look good not ridiculous. Maybe we should stop throwing back to the leather helmet era. How great would the Cowboys packers looked yesterday if the Packers weren’t dressed like clowns?

FWIW, I think the Packers throwbacks are better-looking than their road jerseys.

The jerseys, maybe, The tan pants? Hell no. They’d look 100 times better if they just wore yellow pants with those instead of the tan, historic accuracy be damned.

Worse part of the tan pants was the butt-sweat stains.

One should wear tan pants for a job interview, not to play the Dallas Cowboys.

There are no rational grounds on which to disapprove of the Packers tan throwback pants but approve of the Cowboys’ regular pants. I find that I object to both in principle, but find both pleasing to the eye in practice.

Brent, I’m actually opposed to tan pants outside of the sports arena. Not a khakis fan.

“What are you wearing, Aaron from Green Bay”?

I was put off by how different the yellows were on the jersey and helmet. I understand that matching different materials can be problematic but that really stood out.

Psh, try being an OCD Cowboys fan and seeing the green pants compared to the silver helmet every week. And to top it off, I barely ever get a reprieve since they wear that uniform 90% of the year…

The Dolphins aqua socks are no different than the other teams wearing the mono look like the Bills and Titans. Not a fan of this. Would much rather see white striped socks, or another contrasting color. I thought the Chargers Color Rush royal blue was great, but I thought yellow socks to match their facemasks would have been sweat.

Will say again. Packers going with alts for this game a crime. Two flagship franchises should remain in their classic uniforms. Metallic blue v. green/gold.

I had friends over who couldn’t watch the game live and asked us to tape it for them. When we fired up the DVR, I had a moment of panic that I’d taped the wrong game and recorded the Rams or something instead. I should know better, and part of it was I honestly didn’t remember who the Packers were playing – I sort of thought it was the Giants – so seeing a kickoff between the Cowboys and blue and gold threw me for a second.

Still, that is a beautiful look for the Packers. The gold yoke is fantastic, and the mismatched pants work for me in about the same way that Dallas’ mismatched pants do. If I had to wear a Packers jersey, I think I’d want this throwback (with Herber 38 on it).

Reminiscent of the greatest NFL t-shirt of all time:

Another point on the Dolphins… They always wear white at home for day games, but always with white pants. This is the first time I can remember them ever going white tops/aqua bottoms at home.

Watching Packers/Cowboys yesterday and noticed that the Packers jerseys didn’t match. The NFL shield created a cut-out on some of the jerseys. Some the shield was above the line. Both jerseys in this photo are Nike. Odd. link

Francona wore a “C” sweatshirt and the “C” hat during post game interviews.