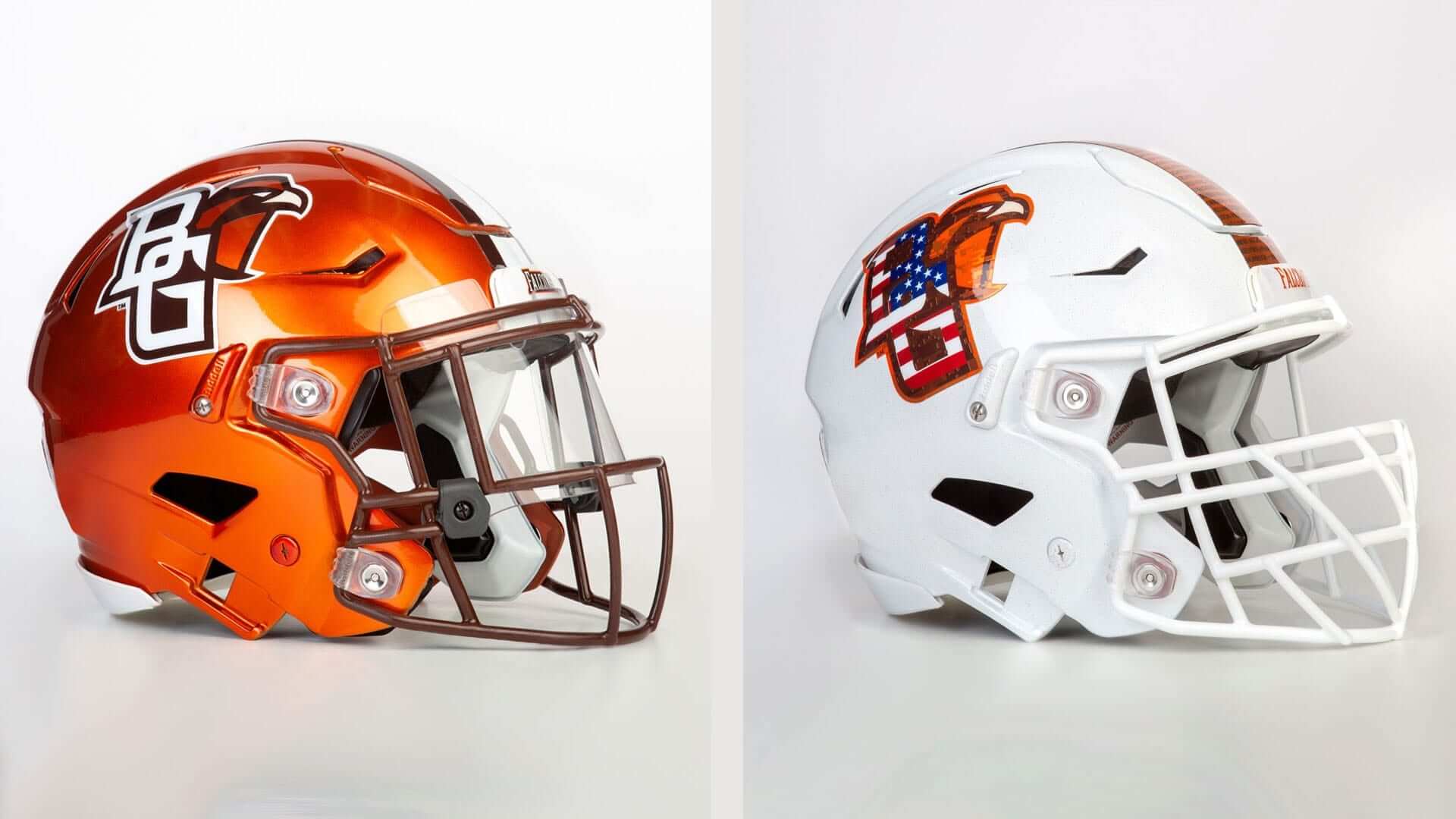 This appears to have slipped by us earlier in the week, but Bowling Green State University has unveiled two new helmets for the 2018 season. The redesigned “lightning orange” helmet will be used as their standard. The white helmet with an American flag design inside the “BG” will be their annual Military Appreciation helmet.

For the third consecutive year, BGSU football will wear commemorative helmets when the team recognizes the military during Heroes Day Sept. 8 against Maryland. The helmet will recognize the students who attended BGSU and died while defending our country.

On each side of the while helmet, the BGSU logo is overlayed with the colors of the United States of America. Down the center of the helmet is an orange stripe that includes the names of 111 students from Bowling Green State University who have died in the line of service. On the back of the helmet, the number “111” is shown at the bottom of the stripe down the center. A year ago, the team introduced a brown Military Appreciation helmet and the Falcons wore an orange version in 2016. 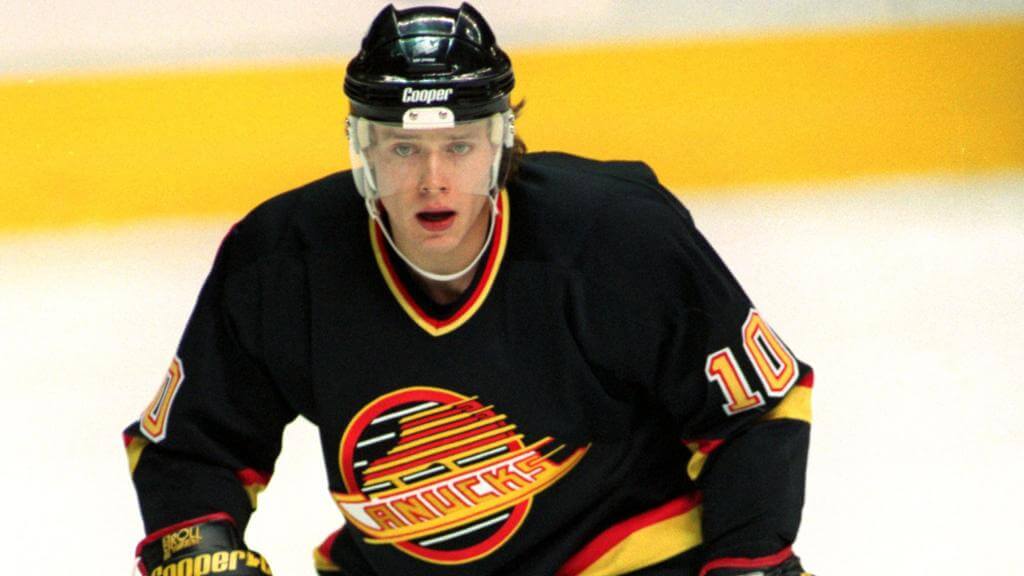 Great story here on Jeremie White, a young graphic designer, who was able to help the Vancouver Canucks redesign their jerseys in the late 1980s.

Jeremie White was 20 when he decided he was the graphic designer who could offer the Canucks the updated jersey they didn’t even know they wanted.

The next step was convincing Brian Burke, who, in 1989, was the director of hockey operations for the Canucks. White contacted Burke’s secretary and for the next few weeks begged for a five-minute meeting.

Eventually Burke caved and White went on to help design the uniforms that were recently voted the most popular vintage Canucks jersey by fans.

Vancouver is celebrating their 50th anniversary this season, and the fans have voted for Jeremie’s jersey to be worn for a number of games.

Back by popular demand. #Canucks50 pic.twitter.com/uvCSMmiBZ8 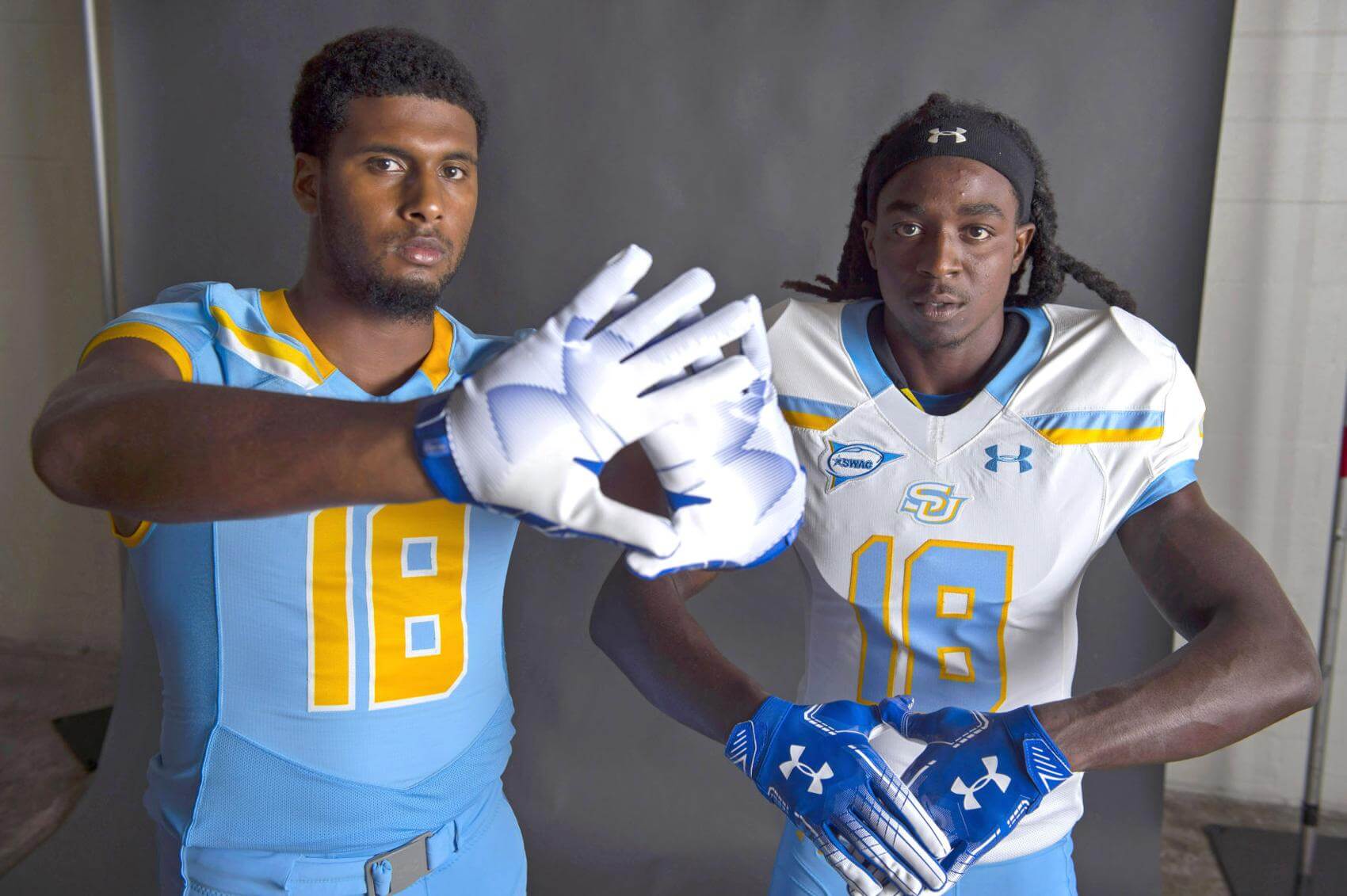 For the first time in its history, Southern will show off the spoils of a major apparel and equipment deal, debuting the school’s new Under Armour football uniforms at fan day, Sat. August 18, 2018 at the F.G. Clark Activity Center. It’s a five-year deal that outfits all 15 intercollegiate teams, from football to bowling, with everything from game equipment to practice shorts. The deal also covers The Human Jukebox, cheerleaders and allows fans to purchase authentic gear from the university bookstore — another first. 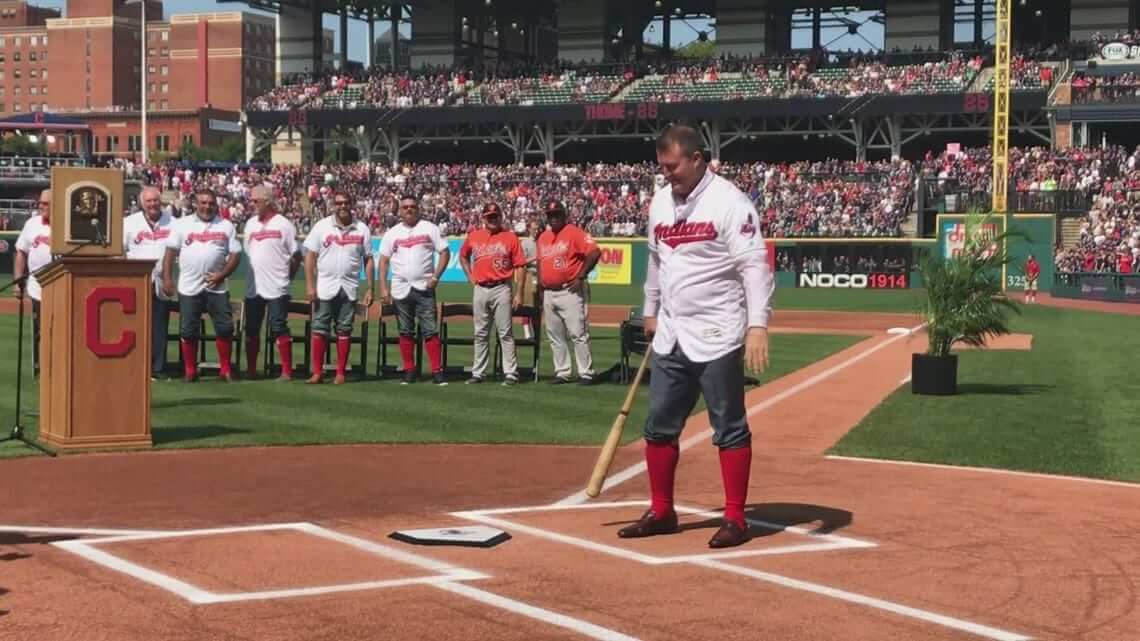 Jim Thome, and his beautiful high socks are being honored this weekend at Progressive Field. The Indians retired his #25 jersey yesterday, as well as recognizing him for his Hall of Fame induction last month.

As the festivities wound down, Thome removed his gray suit coat and exchanged it for his white “25” Indians jersey. Of course, he was wearing his trademark red socks. They did not go well with his suit pants, but no one seemed to mind.

Thome grabbed a bat and assumed his left-handed stance at home plate and mimicked hitting another home run with his colossal swing.

Thome and his son, Landon, went into a home run trot. Fireworks were shot off from behind the center field fence. Music from The Natural played over the Progressive Field sound system.

Everyone was joining in on the high socks fun. 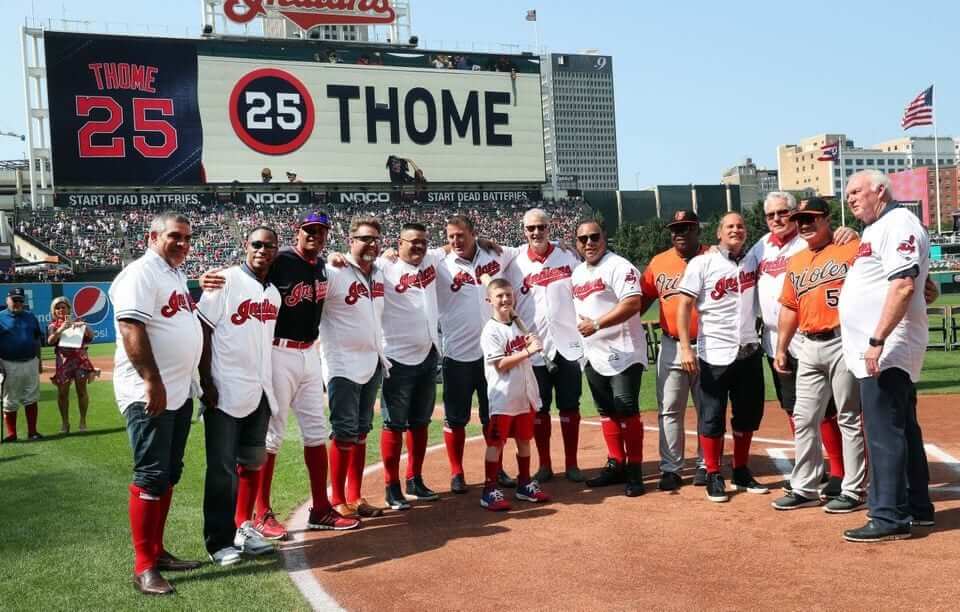 Here’s a good closeup of the patch the Indians were wearing:

Terry Francona (and players) will sport high socks for Jim Thome's ceremony this afternoon. Francona: "I’ll do it for the ceremony, but I’m not going to make a pitching change looking like a moron."

@PhilHecken We have no time for first initials in the preseason! pic.twitter.com/ubRdlOZKOz

Though Jeremie White has offered to redesign the blue and green Canucks uniforms for free in the story, no need to contact him.

The Canucks just need to go with this, with some tweeks:

– Put the Sitck-in-Rink on as the shoulder patch for the green jersey.

Otherwise, this created prototype by Colin May and Justin Cox is exactly the uniform that the Canucks need to be wearing.

Agreed – this concept is very near perfect.

“On each side of the while helmet” seems to be a typo. Also the Brown in front for the Rams has a hell of a lot of space between the 8 and the second number on his jersey.

I thought the same thing! Must be a 4

Those aren’t last names on the two Rams players’ jerseys.

The Rams are simply pointing out that both of those players are destined to sign with Cleveland after LA cuts them.

Thanks, I’ll be here all week!

On first glance, I thought that photo of Jim Thome stepping in with baggy pants and high socks was one of those beautiful colorized images from yesteryear.

That style may not work with dress slacks, but it sure would look sharp with baseball pants!

Damn. I was hoping for the Flying V jersey.

Did I miss it, or was there no coverage here of the Carolina Panthers wearing white pants with their alternate blue jerseys versus the Dolphins?

Frankly, I thought it looked great and would recommend that they use the white pants with the blue jerseys all the time.

Glad to see that the SWAC is getting good deals from the other apparel makers. That Russell contract was overkill. I am sure Alabama helped Alabama A&M get the Nike deal. Just wish Under Armor gave Southern some Yellow shirts and britches. 1-AA is getting a lot of respect.

Did you make mention of NFL helmet changes? Wasn’t till I went to NFL.com that I noticed the Browns axed their stripes, the Titans changed their helmet color to navy and the Chargers are doing white top/white pants (yawn, guess I’ll continue to look to college for interesting designs).