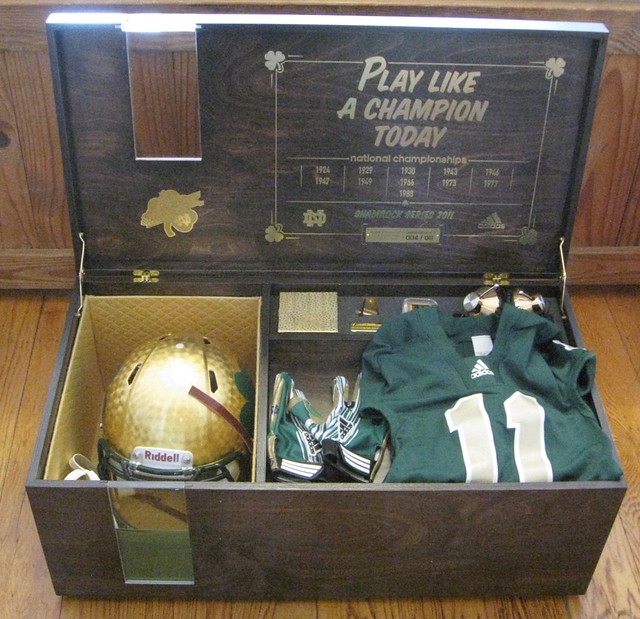 .
I recently received an amazing Notre Dame promo box from Adidas, and I’ve decided to auction it off for charity. Here’s the full scoop:

1) First, about the box and its contents: Everything is in like-new condition except for the Adidas-shaped piece of chocolate, which was already broken when I received it, and the gold dome dust, a teeny-tiny amount of which was removed from its container for this photograph (I was unable to get those dust flecks back into the container). I wore the jersey, helmet, and gloves for about 10 minutes on Nov. 11, I plugged the flash drive into my computer for about a minute on that same day, and maybe five or six people tried on the helmet during the Uni Watch party on Nov. 12. Aside from that, everything is unused.

2) The box is being auctioned off as a single unit, not as separate components. Please don’t ask if you can bid just on the helmet, or just on the jersey — not gonna happen.

3) Bidding is now in progress and will conclude on Tuesday, Nov. 22, at noon Eastern.

4) This is a silent e-mail auction. To bid, simply send an e-mail with your best offer to this address. Your e-mail should include your full name, shipping address, and phone number (I may call you to confirm a few things). Bids that do not include a working phone number will be deleted. The highest bid will win. In the case of identical bids, the one with the earlier time stamp will be the winner. (Note that this is not like eBay, where you can simply beat the next-highest bidder by a dollar. If the highest bid is, say, $1 million, and the second-highest is $2,000, the winning bidder must pay the full million.)

7) If you’ve already bid and then want to increase your bid, just send another e-mail. There’s no limit to the number of times you can increase your bid. You may not retract or lower a bid once you have made it, however.

8) If the winning bidder fails to follow through with payment, the second-highest bidder will win the box (and, you can be sure, I’ll splatter the deadbeat bidder’s name far and wide).

9) The winning bidder will be responsible for either (a) picking up the box from my apartment in person, (b) arranging for someone else to pick it up in person, or (c) covering shipping costs + insurance via UPS (the package will weigh about 80 pounds; its length, width, and height will be 37.5″, 18.5″, and 22″; and the origin zip code will be 11217, so you can do the math to see what the shipping charge will be). I have the original shipping materials that Adidas used when they sent the box to me, so I’ll use those and do my best to pack things as securely as possible.

10) Once I receive payment from the winning bidder, it will be donated in the bidder’s name to his or her choice of the following nine organizations (this list is final, so please don’t ask me to amend it — thanks):

ASPCA: Longtime animal welfare advocacy group. Tucker and Caitlin are rooting for the high bidder to choose this option.

If the high bidder wants to divide up the bid amount among two or three of these groups, that’s fine too.

11) I will add my own $1000 contribution to whichever organization(s) the high bidder ends up choosing.

And there we are. If you have questions about any of this (like, legitimate questions — not “So am I the high bidder?” or “Can you let me know if you received my bid?”), feel free to be in touch at the usual Uni Watch address (not at the bidding address). Thanks.