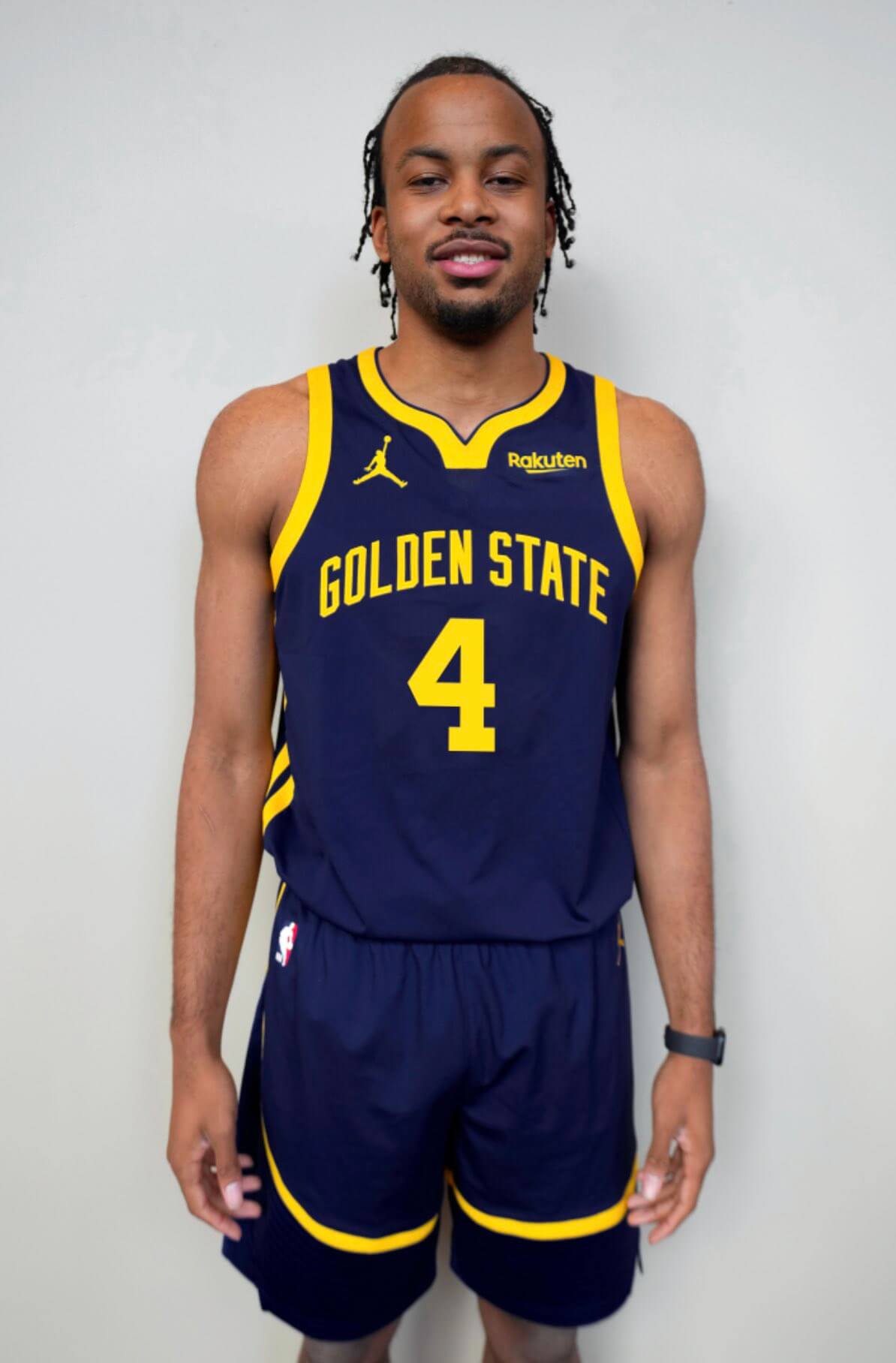 The Golden State Warriors unveiled their new “Statement Edition” uniform for the 2022-23 season on Tuesday afternoon. As you can see, it’s a fairly simple uniform, in navy blue with athletic gold accents. “GOLDEN STATE” appears in vertically arched letters across the chest with block font numbers in gold as well. Shoulder and neck trim are also rendered in athletic gold. This video provides a look at the full uniform, which also has two thick gold stripes on the right side of the jersey and pants, with gold trim bisecting the shorts at mid quadriceps.

It’s difficult to tell, but it appears the dark blue on the shorts may be a slightly different hue above and below the gold stripe. I’d venture to guess the striping pattern is meant to mimic the cable design of the Bay Bridge. As you can see in the video, player NOB will be radially arched and block font number are also athletic gold. The uniform seems to be generating comparisons to both California and Michigan basketball uniforms, and yes, the colors are quite similar.

This is the first time “GOLDEN STATE” has appeared prominently across the front of a Warriors jersey since 1975. You’ll also note in the video the team will be unveiling their “Classic” edition on August 8th, less than a week from now.

Boring NBA uniforms continue to be a trend.

Yeah, what’s up with that? Why would anybody want to buy this boring, ho hum jersey??

It would go really well with my midnight navy Jordan VIs

It’s a very pretty, classic, and elegant uniform, but it’s not needed! It’s just a uniform for the sake of a uniform. I’d very much rather see the Warriors in their traditional road blue uniforms than this.

And yes Paul, it totally looks like a Michigan Wolverines uniform.

I worded that poorly. Removed “old” in the text to avoid any confusion.

I really like this, much more than the standard home and road uniforms (yes, I know they’re not called that anymore, but I’ll be damned if I use the Nikespeak). The wordmark reminds me of the old San Francisco unis and I love how the gold pops against the navy.

What’s strange is the lower shorts color looks almost black in the pictures, but a lighter blue in the video.

I noticed that too!

Different fabric, maybe? I saw that too.

Classic edition (based on the leaks) Aug 8th is going to be the road blue with “Warriors” on the chest from the Mullin/Hardaway/Richmond days. I like that one a lot.

Agree it feels like a Michigan uniform. Also the navy/yellow combo is a knock off of the Pacers’ look.
Feels like Nike/NBA is just circling the drain on uniform designs now. What is the point of this other than to have a new jersey to sell this year? It really adds nothing to Warriors’ look, doesn’t match their usual aesthetic or past aesthetics, and is derivative of other teams.

What is the point of this other than to have a new jersey to sell this year?

Very Cal. When you’re the defending champs, and you’re wearing a local college team’s look (more or less), it feels like pandering. And would a Stanford grad buy one? UCLA? I am not sure.
They have a look that sells well. And they win in it. Stop reinventing the wheel, Nike.

Classic version is going to be a Run TMC throwback. Dubs are keeping it pretty simple for 2022-23.

This being a “statement” uniform, I’m gonna assume it’ll be their “alternate” that gets worn annually, right? I don’t care for the stripes only on one side of the uni and no logo (or anything) on the other hip, but whatever… anything that gets them away from those bridges and cable cars…

These are fine. They don’t HAVE to be fancy.

“More is better” isn’t much of a valid design concept.
Neither is “One more bumper sticker and my car will be perfect.”
For example, H&R Block’s apple green cube it brilliant, though some of the clueless among us will fault it, for sure.

If they can vertically arch the team name on the front, why can’t they do the same for the player name on the back?

Player names are of various lengths and letters, whereas every one of these will say “GOLDEN STATE”.
That said, they did it back in the 1960s and ’70s without our modern technology, so that argument doesn’t really hold water.

This was going to be my comment as well, do both vertically or both radially. Preferably not one of each.

Oh look. Another forgettable off brand uniform for an nba team. It’s such a fucking joke. What’s the point of even having a brand?

How many uniforms does the NBA need for all it’s teams? This one looks like a high school throwback. It’s nice but not needed. You lose track of the team’s identity after awhile. It’s also a very conspicuous merchandise cash grab.

This is the most “meh” NBA jersey ever.

Just pick a home and away and stick with it.

What is this nonsense? First and most important, please for the love of the uni-verse, the warriors need to ditch that old wishbone collar. It is absolutely atrocious. Second, Nike needs to ditch those stupid half sleeve trim templates (and the off-kilter cutout on the shorts’ hem). Third, the only thing that separates this from a highschool jersey is the side trim/shorts trim curve thing and that ain’t much to look at.

As a warriors fan who is from the Bay Area, I have been perpetually frustrated with the warriors’ modern era for their inability to translate simple, attractive designs to updated jerseys and logos without completely missing the mark. Any of the warriors unis from inception through the orange and navy lightning bolt era are good unis. Pretty much everything since (that isn’t a close-to-exact copy) has been pretty awful. Even their standard roundell chest “the city” homage is so flawed and half-assed compared to the originals.

I will say this for these unis: the colors are really gorgeous. The blue is not a blue from any era of warriors history as far as I can tell, but it has a depth and richness to it that makes me wish this was always their blue and the yellow is a particularly nice shade, but yeah… it’s pretty darn-near just Michigan’s colors, and it’d be easy to let that slide and say, hey blue and yellow is a common athletic combo, but UofM’s blue and yellow (maize) is serious business for Michiganders and Michigeese, and we’ll, everyone who gets it knows it (it’s like “THE Ohio State” or “The U”. It’s their thing that they hang their pride on).

Anyway, I feel like this will look fine in court as it’s too simple to offend the eye, and the colors are really nice, but all in all, doesn’t exactly project “Warriors” or get the heart pumping.

Heh. I should have had you write the review ;)

I can be long-winded. Probably because I am a writer myself :)

One thing that bugs me more than the actual designs Nike is rolling out is the dilution of the (ick) brand.

The Warriors are in a unique position right now as they are in a dynasty phase of their franchise. People will be able to look back at this (let’s say) 10 year stretch of warriors history, and say “I know that roster” and “I have specific good memories of those seasons” but thanks to the Nike uni program people will probably fall into two camps: 1- they will remember this team as wearing the royal and yellow roundell homage unis and forget the countless variants and alternates that they (especially the warriors) rolled out then threw out every year. Or 2- they will not remember this era of the franchise as having a clear visual identity, thus slightly diminishing the nostalgic/sentimental value of this era for the fans that got to enjoy it because those memories will get muddied up by the throwaway culture of current uni design, and treated as the jerseys are treated: not worth hanging on to beyond the season in which they specifically existed.

As a fan who now lives on eastern standard time, I mostly follow the team via stat lines, box scores, and next day analysis, so I will remember them as wearing their royal&yellow roundells, and Nike’s other efforts will be lost on me because I simply don’t see them in action much. Sadly, diehard fans who watch every game will be the ones who are seeing the team in a different get-up every night and sometimes it’s royal or navy or black or dark blue and sometimes yellow, sometimes metallic gold, sometimes orange, sometimes red, sometimes it’s the city, or the town, or Oakland, or San Francisco, or the bay, or golden state, and sometimes it’s a lightning bolt or a bridge, or a tree, or a map of california, or a cable car, or an ornamental Chinese pattern, and none of it is going to stand out as “the look” of this era of the franchise.

We who love uni-design and crave new unis constantly (yes I just railed on a constant barrage of new unis only to admit I love the constant barrage of new unis) like to gripe about the NFL’s stricter uni and helmet rules, but they do tend to lend themselves to an era of a team (be it good, bad, or other) having a “look” that we can pin to those memories. There is some greater value in that.

I think the NBA is endangering some basic, “branding” principals with all these seemingly random or thinly justified frivolous uniform designs.

Could be a Kent State jersey, just swap out “Golden”

Or keep “Golden” and swap out “State” for “Flashes”

Reminds of the 2002-03 Marquette Uniforms

Michigan Warriors. Jordan logos are too big, no Warriors logo on the shorts, these look like a cheap knock off from the streets. But so does every NBA uniform from the time Nike has taken over. Honestly, the only good thing Nike has done since taking over from adidas is eliminating the sleeved jerseys and the Christmas jerseys. Otherwise: minimalistic, lazy, uncreative designs that cleverly fit the demand from the current young players/fans. I was not made for these times.

For an understated uniform, this is actually not bad. The Cavs and Jazz are dull in comparison.

I like it more than I otherwise would after seeing the horribly uninspired new Cavs set, but I really wish it were yellow instead.

Might be the shade of blue but major Pacers vibes here.