People Who Live in Glass Houses … Are Really Nice 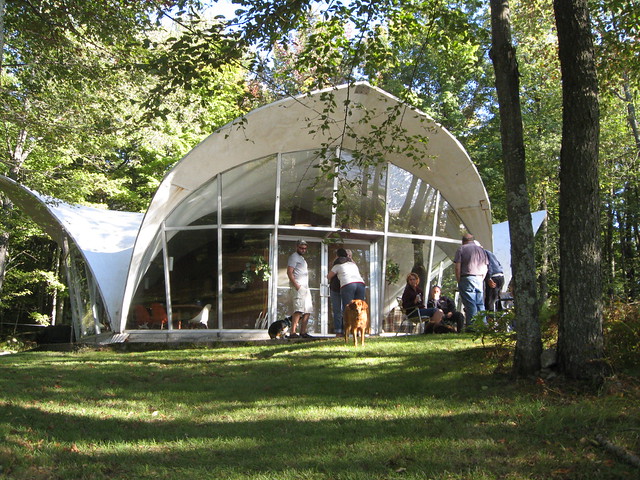 .
We’re taking a break from uni-related content today, at least for our main entry, because I want to tell you about the very special time I had this past weekend.

Some quick background: As longtime readers may recall, in September of 2008 Kirsten and I became interested a pair of very cool-looking fiberglass shell structures located just north of Shea Stadium, along the Flushing Bay Promenade. Our curiosity about the structures led us down a surprisingly deep rabbit hole — so deep that we ended up producing a small museum show about them. (If you’re curious, or if you need a refresher course, you can click through all of the show’s content by starting here.)

The structures were originally built for the 1964-65 World’s Fair, where they served as small exhibit pavilions. Although only two shells remain on the site, there were originally three of them, and the question of what had happened to the third one was the biggest unresolved mystery of our research project. Realistically, we figured it had probably been torn down.

Then, last November, we heard from a family that had stumbled across our web site. They explained that they had acquired the third structure after the Fair’s conclusion and had been using it as a rather unusual summer cabin for the past 40-plus years. This was super-duper-exciting for us, because (a) it solved a big mystery, (b) it meant the third structure was safe and sound, and (c) it was good to hear that the third structure had its original glass and aluminum walls and was still functioning as a building, not just as an open-air canopy like the two remaining shells in Flushing.

There was also the exciting prospect that (d) we might get to see the third structure in person. It took a while to arrange that, but it finally happened this past weekend. We also got a lots of great background info and solved at least one additional mystery regarding Flushing shells.

Now then: These are our new friends, the Smiths. In the center are Katrina and her husband, Andy; on the left is Andy’s mother, Karen, and on the right is Andy’s father, Chuck. Chuck’s father, Carlos (now deceased, unfortunately), was in the equipment manufacturing and fabrication trade, and he routinely received notices regarding auctions of old equipment, old gear, and so on. After the 1964-65 World’s Fair ended, he received a notice announcing that the three fiberglass pavilions were being auctioned off. (Chuck, who was a teen-ager at the time, says he still has the flier somewhere and has promised to find it for us.) Carlos envisioned one of the structures serving as a summer retreat, so he put in a lowball bid for one of them — “a couple thousand dollars,” says Chuck. One of a Carlos’s business acquaintances, who was a building contractor, bid on the other two, although he didn’t actually want the fiberglass shells; he just wanted the glass walls for his contracting business.

It appears that they were the only bidders. The contractor got his glass (this answers the lingering question of why the shells in Flushing no longer have their walls) and Carlos got his summer cabin. It’s still unclear how the decision was made to turn the two remaining bare shells into a public display along the Flushing Marina Promenade. Maybe that was a contingency plan all along in case nobody wanted to bid on the pavilions, or maybe that was something that was decided upon later on.

Meanwhile, Carlos had to transport his new property upstate. In order to do that, the pavilion had to be disassembled. When we went to visit the Glass Camp on Saturday, Chuck’s sister Deb surprised everyone by pulling out a bunch of old snapshots showing the pavilion being taken apart right there in Flushing. Amazing!

After the pavilion was disassembled, its pieces were then trucked upstate to the Smiths’ house, where they sat for a winter. It took another year or two before Carlos was able to secure a spot in the woods, build a road to get to it, pour a foundation, and get the shell erected, and another year after that before he got the glass walls installed. Then he had to come up with a floor plan (he made some very clever use of paneling and scooped out a half-basement in one quadrant of the building to allow for two levels of bedrooms), make provisions for plumbing and electricity, and so on. In short: Getting the Glass Camp set up was a lot of hard work.

But man, was it worth it. The building sits in an idyllic lakeside setting, and the Smiths have filled it with some lovely furniture, like a coffee table with a driftwood base and this custom-made curved table. You can see more of my photos here, and Kirsten’s are here.

As for the pavilion itself, it’s held up remarkably well, especially given the harsh Adirondack winters. Chuck says painting and patching small leaks are constant issues, and he’s put some fishplate patches in a few spots, but for the most part the structure is in surprisingly good shape. I’m sure the men who designed and built it back in the early 1960s would be astonished to learn that it’s survived this long. (Unfortunately, the two shells in Flushing are in much poorer condition, and we’re very worried about their future. Since Chuck probably knows more than anyone alive about how to repair and maintain these structures, I’m hoping to put him in touch with the New York City Parks Dept., which owns the two shells in Flushing.)

None of this would have been possible if not for Katrina Smith, who stumbled across our web site last fall while trying to learn more about her family’s unique summer residence. She could have just clicked through our site, learned what she needed to know, and left it at that, but instead she took the initiative to contact us. She and the rest of the Smiths have been extremely gracious and generous-sprited toward us (how would you react if a pair of total strangers had a weird obsession with a treasured piece of your family’s property?), and we’re very happy that our research has helped them fill in some of the blanks regarding the Glass Camp’s history, just as they’ve helped us connect some of the dots for our own project.

We plan to stay in touch with the Smiths. For now, though, we’re just grateful for the amazing experience they gave us this past weekend. Thanks, guys — you’re the best.