How Do Native Americans Feel About Their Culture Being Depicted by Sports Teams? 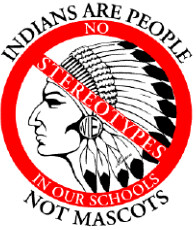 “My great-grandmother was a full-blooded Cherokee Indian. I have no problem, whatsoever, with the use of Native American logos. None at all.” — Randy Rollyson

“As a member of the Ottawa Tribe of Oklahoma, I generally don’t have any qualms with teams using Native American imagery. The only one I see as kind of offensive is the Redskins, just because of the racial epitaph that is associated with it.” — Garrett Alley

“I’m a member of the Penobscot tribe of the Wabanaki nation. Tribes and nations are owners of their own culture, and culture cannot (or rather, should not) be taken. It can, however (and should), be shared. If the Wyandotte want their cultural and historic ties to Eastern Michigan (either the area or the school) to be displayed prominently, then that’s more than acceptable.

“What is completely unacceptable is the use of iconography that reinforces the ‘Myth of the Redman,’ instead of the actual people of this land. The Braves, the Redskins, and the Indians base their icons on the popular image of Native people that was fed to Eastern Americans in the late 19th century, through the Wild West Show. This Redman, of course, is a myth, whose culture and way of life is so far removed from the actual lives of native people that it’s hard to see that representation as anything more noble than the black-faced performers they replaced in Vaudeville shows.” — Joe Curran

“I am of Cherokee descent and by and large have no misgivings regarding the use of Native American namesakes or imagery in sports — with the exception of the Redskins. I don’t care for that name, although I also don’t feel strongly enough about it to demand its removal. I like the Braves — it is a strong, honorable term, and the team’s tomahawk logo looks great, no different than a sword being used for a team called the Knights.

“Forcing schools to drop long-held mascots (like the Fighting Souix) is much more damaging to societal welfare than keeping them. I am afraid it could create a backlash unto the communities it is trying to ‘protect.'” — Mendy Alvernaz

“I am a member of the Choctaw Nation of Oklahoma. Team names the like Redskins, Indians, etc. are all racially insensitive. These names are an attack on my culture. The teams that have been given permission to use tribal names are fantastic, and keep the Native American culture alive. But the ones that are broad, out-dated stereotypes need to be erased. … The fact that few people see the problem with these names saddens me, and people saying that it doesn’t matter angers me.” — Payton Guthrie

“I am not an official member of any tribe, but I have a lot of Native American heritage in my family tree. … Chief Wahoo and the name Redskins are horrible and racist, no doubt about that. But other names, like Chiefs and Braves, and even the tomahawk, do not offend me (people often call me Chief as a nickname, and I like it). I do feel that if a team wants to use a specific tribe name, like Huron, that they should get the OK from the tribe. If actual members of a tribe have a problem with a team nickname, then I defer to their opinion.” — Tony

“I can trace my family lineage directly back to Joseph Brant (Thayendanegea), a Mohawk political and military leader who was named a war chief in 1772, and my third great-grandfather was an Indian translator for Buffalo Bill’s Wild West Show. … When it comes to the Native American iconography in sports, I’m have mixed feelings. I think schools like Illinois, North Dakota, Utah, Florida State, and so on are fine in their use of the tribal names. As long as the name is used respectfully and the school has made overtures to work with the tribe in representing its history and culture, I actually think it’s a great thing.

“For most pro teams, like the Indians and Braves, I don’t have an issue so much with their name as I do with their stereotypical mascots. Chief Noc-a-homa and Chief Wahoo both cross the line and are more of a caricature of Native Americans than a tribute. I realize Noc-a-homa is long gone, and therefore I’ll give the Braves a pass. I don’t have a problem with the tomahawk on their uniforms; I think it works with their name. But the Indians definitely need to do something to get away from Chief Wahoo.

“As for the Washington Redskins, I honestly don’t see how this team can still exist in this day and age. ‘Redskin’ is essentially a racial epithet. … The Redskins, located in our nation’s capital of all places, need to change their name and iconography. No matter how much they try to spin it, it’s nothing more than a racial slur.” — Gary Mattox

“I’m a member of the Choctaw Nation. I absolutely support almost all uses of Native American iconography in sports. The only example I don’t support is the Cleveland Indians. I’m not even worried about the logo, even though many find it offensive. I just hate the misnomer ‘Indians.’ I’m not from India, I’ve never been to India, why use the wrong term? Plenty of tribes would lend their name. Or they could even use their nickname ‘the Tribe’ full-time.” — Anonymous

“Indigineous peoples are distinct nations/cultures — we aren’t all one. It’s not my place as an Odawa to tell a Seminole what’s acceptable. So if the local tribe approves the mascot and associated imagery (Florida State, for example), then I’m fine with it. I realize this can get complicated when some bands within a tribe might approve and others within the same tribe might disapprove, as was the case with North Dakota.

“Generic nicknames (Redskins, Braves, Indians, Warriors, etc.) are generally offensive, as are the activities associated with them, like the tomahawk chop. I see little value in retaining them.

“Bottom line: Our historical relationships with outside groups are fraught with broken treaties, agreements, and promises. As a result, we are generally distrustful of outside groups. Thus, we have a problem when an outside group tells us we ‘should feel honored’ by their usage of Native imagery. Rather than telling us to feel honored, let us decide how to be honored. And if that means dropping the imagery, please respect our culture.” — Scott Sochay

“I am one-quarter Apache (my father was the son of a full-blooded member of the Apache nation) and I have absolutely no problem with Native American iconography as it is currently being used. One of my two favorite baseball teams, in fact, is the Atlanta Braves. I have no issues with the tomahawk logo. And I really think that there are far more important issues facing my Native American brothers and sisters than whether or not some portion of our culture is being used by a sports team.” — Jack Bagley