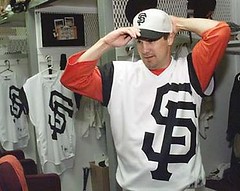 Fans and the media weren’t the only ones who weighed in with opinions on the futuristic uniforms worn in 1999. The guys who actually had to wear these things — the players — had their own thoughts on the promotion. Here’s a sampling of those thoughts, as compiled by Uni Watch reader Trevor Williams:

“I was pumped up out there with the different uniforms.” — Pirates pitcher Kris Benson, after tossing his first career complete game

“Before the game, I was the loudest one ragging on these things. Now I can’t wait to wear them again.” — Pirates outfielder Al Martin, who hit two solo home runs

“It doesn’t bother me. Because it became a big story and there’s been debate back and forth, there’s an added benefit nobody really anticipated. Everyone’s definition about what is hokey and what detracts from the game is different, so I’d like to see it for myself, but the concept doesn’t bother me in any way. ”¦ Albert Belle hit three home runs in that game, which he would have regardless of the uniform. When you think about it, the next wave of baseball fans are the kids. If we can’t figure out how to market or relate to kids, a lot of them won’t be interested. Maybe it is even good to make mistakes in a hokey sense — just to change the mind-set and try new ideas.” — Orioles shortstop Cal Ripken

“We got 900 different uniforms anyway. What’s the difference with one more.” — Mets pitcher Al Leiter

“They are all right. It’s hard to develop a uniform for the future. The hats could use some work, and I don’t like the sleeves, but I’m into having my name spelled that way on my back. The only problem is that my name is so long that part of it might get tucked into my pants.” — A’s outfielder Ryan Christenson

“I don’t know what to make of it. I’ve been here seven weeks, and I’ve worn more uniforms than I did the whole time I pitched.” — Mets bullpen coach Al Jackson

“What happened to the sleeves? I’m going to have to get out the barbells today.” — Braves manager Bobby Cox

“We should have had a big top. If we can’t sell the product the way it is, maybe we should give it a rest.” — Mets pitcher Orel Hershiser

“Give me matching pants and I’m ready for bed. All we need are red bottoms and we have the perfect pair of pajamas.” — Angels pitcher Mike Magnante