The Curious Case of Nery Pumpido 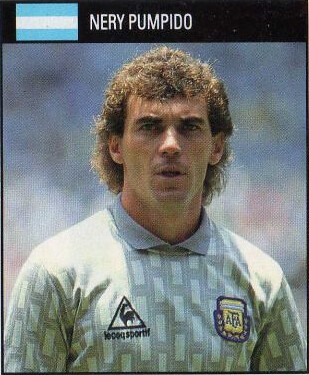 Uni Watch reader Pablo Souki recently sent me the following note regarding a soccer injury involving a wedding ring. As you’ll see, the details are a bit sketchy, but it definitely seems like something nasty happened. Judge for yourself. ”” Paul Lukas

Back in 1987, Nery Pumpido — Argentine goalkeeper for River Plate and World Cup winner with Argentina the year before — lost a finger because his wedding ringer got caught on a hook that holds up the goal’s net while doing some physical drills in practice. Not a game, but still. Or at least that’s what this 1987 article says. Here’s translation of the last three paragraphs:

During Tuesday’s practice session, Pumpido, under the direction of trainer Luis Maria Bonnini, was performing a simple exercise: jumping under the crossbar and touching it with both hands. In one of the jumps his wedding ring was caught in one of the hooks that holds the net. Pumpido was left hanging from the ring, until his ring finger was separated from his hand. The player fell to the floor and passed out from the pain.

After going to a nearby hospital he was moved at 4:30 to Mitre Hospital, which has the best facilities for microsurgery in Buenos Aires. Doctor Enrique Penner, considered one of the best specialists in this topic, worked during four and a half hours trying to reattach the finger.

The surgery, which ended after midnight, was considered a success, but the doctors warned that there must be a wait of at least one week, to follow up on how the skin reacts and the extent of the damage due to the hours the finger was separated from the hand without blood flow. Pumpido’s chances of playing again are good, though the doctors warn of “a reduction of sensitivity and mobility in the hand.” Pumpido was visited at the hospital by several players from the national team currently taking part in the Copa America: Maradona, Batista, Braun and Garre.

Wikipedia says he “almost” lost the finger. In fact, all English-language links say he “almost” lost it, and some say this happened in 1989 (not ’87), when he was playing with Real Betis, a Spanish club. But that means it wouldn’t have happened in Buenos Aires, as the Spanish-language article says (unless he was there for the Copa America..?). The Spanish article is from a newspaper archive and is dated July 9, 1987, so I tend to believe it’s the most accurate report out there.

Believe what you will, I guess. But he either lost or almost lost a finger because he was wearing his wedding band in practice.