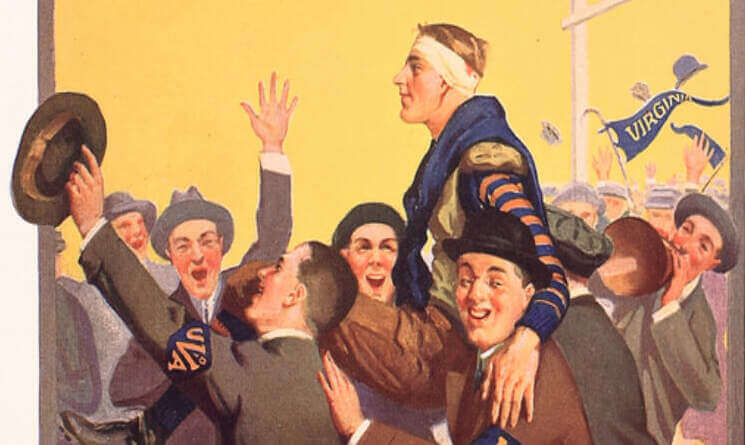 Good Saturday Morning, Uni Watchers. I hope everyone has had a good week. I’m currently in the middle of a bonspiel (that’s a curling tournament), and my rink hasn’t fared very well. We play again this afternoon, so I’ll basically be off the grid for most of the day. Unfortunately, there won’t be a ticker tomorrow as I just won’t have the time (but we will still have the full SMUW with all the trimmings). Sorry.

I’m back today with Timothy Brown, who was a guest writer back in August, when he penned this fantastic post on old school football sideline gear. Tim returns today with another great look at college yearbook football art. I think you’ll really like this one!

The typical fan that hears the term “football art” likely thinks first of program covers from the 1930s through the 1950s. Other categories of art or design that may come to mind include magazine covers, various forms of advertising, and team logos. Each has produced iconic designs that cross the boundaries of space and time. However, an underappreciated category of football art is the student-created illustrations in college yearbooks.

Few college yearbooks of the late 1800s and early 1900s included color images. Over the next several decades, yearbooks increasingly used color illustrations on section title pages for the athletics section or individual sports such as football. Part of the attraction of these illustrations is the students created them who were peers of the athletes playing in the games. Most illustrations were as run-of-the-mill as the teams they represented, while others were exceptional, standing out in the otherwise black-and-white yearbooks.

The images shown below were found in yearbooks published between 1907 and 1931. Their primary themes include ball carriers, cheering fans, and battered heroes soaking in the thrill of victory often draped in a blanket. Would other themes matter?

The Tar Heels’ primary rival back then was Virginia. Here we see the Cavalier hero carried from the field after a big victory.

A grittier image represents the Hokies of Virginia Tech struggling to escape his opponent’s grip and an apparent tornado.

Moving north to Big Ten country, a Badger punter sends one into the clouds while his teammates on the sidelines rest and keep warm.

Football is a key social event for Texas fans who wisely sit in the grandstands to avoid the noonday sun.

The University of Denver dropped football after the 1960 season. Perhaps they were overshadowed by the folks in the Art Department.

Another lovely fan bedecked in a fur-line coat cheers on the Quakers of Penn.

A Boston College player escapes from the day’s rumble, hoping to end the day in the rumble seat with his soon-to-be best gal.

Little Coe College plows through the green-jerseyed opponent, surely on the way to a touchdown and victory.

The men on the bench and the throng of fans cheer Kansas State onto victory, a common occurrence in the 1920s.

Southern Cal was a bit player in the football world until the 1920s when players like this guy carried them to national prominence, including their first two Rose Bowl victories.

Virginia Tech reappears, this time in a massive stadium in a big city, so the Hokies are clearly the visiting team. Oddly, they play on an eighty-yard field.

Fantastic article, Timothy, thanks so much for sharing. If you enjoyed this, you’ll definitely enjoy his website, Football Archaeology, which is “digging into gridiron history to examine how football’s evolution shapes today’s game.”

A color by any other name 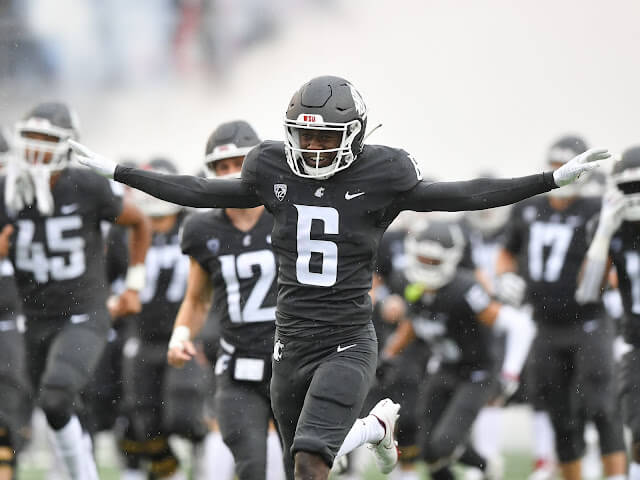 One of my Sunday Morning Uni Watch trackers, Dennis Bolt (who both tracks the PAC-12 and has been faithfully manning the Duck Tracker for the past several years) has a great post over on his blog that takes a look at the ridiculous names some of the PAC-12 come up with for different colors. It’s definitely worth your time to give it a read!

Check it out here!

USFL’s Oakland Invaders 1983-85. League Runner-ups in 1985. About as badass of a logo and uniform you’ve ever seen. pic.twitter.com/hYk33eRLJ4

That’s it for the morning edition. Big thanks to Timothy for another great article!

There will be (at least) two more posts today, and the ticker will go live at approximately 9:00 am, so be sure to keep checking back.

Everyone have a good Saturday and play nice!

Wow! Great stuff, Timothy! Thanks for sharing! It’s amazing what kind of gold you can find in old yearbooks like that.

I want every one of those illustrations as a poster on the wall of my home. EVERY ONE OF THEM.
I wonder what the copyright is on an illustration in a yearbook from 1908.

The USFL was a league of great logos, and that was my favorite!

That Denver Football poster is beautiful in its minimalism. I’m almost getting a Soviet propaganda poster vibe.

I just checked in on the Washington State game…I thought I was watching a black & white movie for a moment.