Good morning, Uni Watchers, and a good Thursday to you all.

We’ve reached the home stretch of the baseball season (C’mon METS!), but lately most of our uniform news has revolved around the other major sports, so it’s time to shift gears today and return to the National Pastime, albeit in the form of Minor League Baseball.

Most of us probably live within driving distance of a major or minor league park — but how many of you literally have one of those in your own back yard? Today’s featured guest author, Derek Smith, is one of the lucky ones. In his initial pitch to me, he said, “Jamestown, New York, my hometown, has hosted a minor league baseball club since the 1930s. That they’ve retained a pro team for nearly 100 years is no small feat for such a small city (only about 30,000 residents today.) Their name and identity has evolved into a lot of interesting uniform looks based in quirky local history (as all minor league teams should be.)”

I’ve worked with Derek in the past, as he penned a feature on golf fashion a few years back, and Derek wanted to bring us the story of Jamestown baseball and the various iterations the MiLB team there has undergone over the years. Derek mentioned that “The team recently rebranded to the Jamestown ‘Tarp Skunks,’ a name with a complicated, unique backstory. I always enjoy the esoteric, local history pieces through the lens of uniforms and branding on Uni Watch, and I trust your readers would enjoy something similar about Jamestown, NY baseball.” With that, Derek set to work. Here’s his piece…

For a city whose population peaked in the 1950 census at 43,000 people, Jamestown, New York has maintained a rich baseball tradition since their first minor league iteration in the 1930s. A few notable major league stars passed through the former industrial town in Western New York to boot. More importantly, the Jamestown baseball teams have gone through a handful of quirky identities with obscure logos and uniforms as minor league clubs are wont to do. Stick with me ’til the end for the classic Americana story behind their current, and most idiosyncratic, identity yet. Hint: It stinks.

Jamestown’s first baseball team was the Jaguars in the late ’30s. Hard to pin down an exact explanation, but I suspect the “Jaguars” moniker was settled on out of simple deference to alliteration. The team folded and later returned as the “Jamestown Falcons.” Diethrick Park, the charming municipal park that hosts the team, is on the border of Jamestown and the town of Falconer. So it wouldn’t be unreasonable to assume that the “Falcons” mascot was a nod to that neighboring municipality.

The team went through a few more uninspired names based on their MLB affiliates––Dodgers, Braves, Tigers––before it got interesting in the late ‘70s. 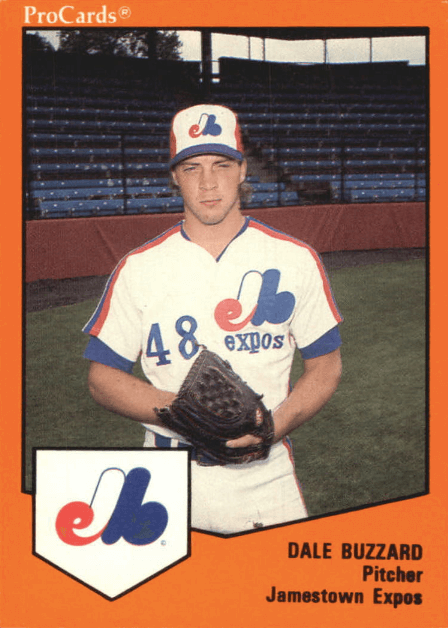 In 1977, the Jamestown baseball team affiliated with the Montreal Expos. The now defunct team from Montreal had some terrific duds, of which the Jamestown Expos wore an exact replica. So what they lose in creativity, they make up for in sheer aesthetic splendor. The white, red and royal blue compose a perfect harmony. You’ll notice the Expos’ colors resemble the French flag in both color and proportion. Jamestown doesn’t have the French-Canadian connection like Montreal (historically home to Swedes and Italians), their baseball uniforms still carry that…je ne sais quoi. I love the continuous red and blue stripe that runs from the neck to the hem and the front number placement that seems arbitrary but somehow works? Reasonable people can quibble about the best baseball uniforms ever, there is no arguing that the Montreal and Jamestown Expos had the best looking cap in baseball history and it’s unlikely to ever be…topped. It’s like Wilt Chamberlain’s 100 point game.

Randy Johnson did a stint with the Jamestown Expos but wore the solid blue cap instead of the iconic tri-color version.

BONUS HISTORY: Johnny’s, the local Texas Hots establishment, has a picture of The Big Unit on the wall indulging in some sauce-drenched-mystery-meat-goodness. Apparently he was known to put back his fair share of steamed franks as a growing young flamethrower in Jamestown.

After the Expos, the Jamestown baseball team rebranded as the “Jammers.” Once again, this probably had to do with an over-reliance on alliteration. My earliest memories of the Jammers have them in a fairly reliable red and black color scheme. Dave Roberts, the Dodgers’ skipper wore these while he was here. They did almost every version of the cap––all red, all black, and red with a black brim. I would’ve enjoyed a black cap with red brim because why not? I always liked when the Reds wore those in the Griffey era. 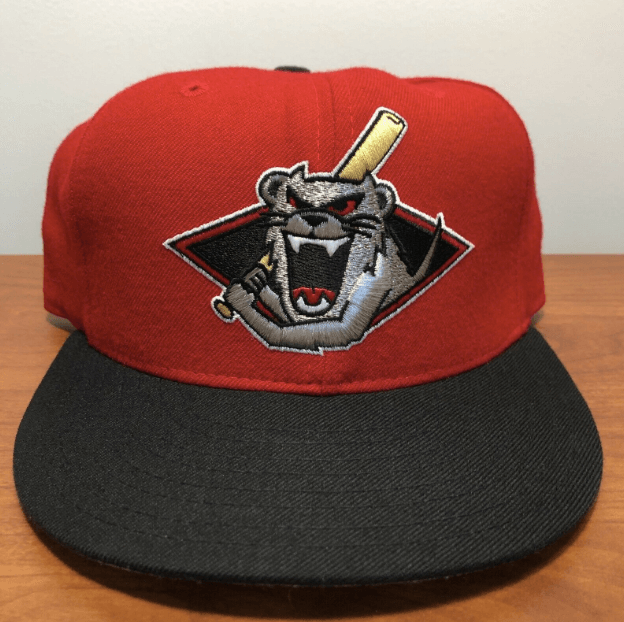 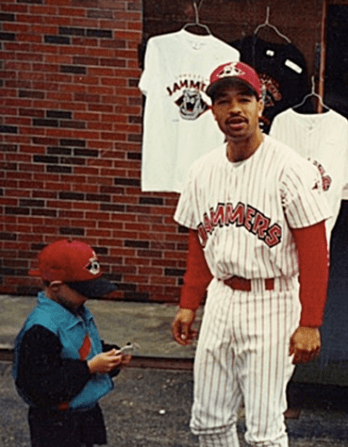 The Tasmanian Devil logo has no discernible connection to Jamestown or Chautauqua County or the name “Jammers” but the baseball bat was a nice touch. Though I admit my bias toward more friendly looking characters for baseball logos.

They rebranded again in 2006, keeping their name but overhauling the identity. Credit to the design team for taking the seemingly random name and applying it to something regionally relevant. Chautauqua County produces a lot of grapes. Drive West out of Jamestown and you’ll pass a lot of land dedicated to vineyards and wineries. So, fans could make an easy association between “jam” and the grape themed unis. Purple and green is an obnoxious color combination but when the logo is an angry bunch of grapes, the options are limited. 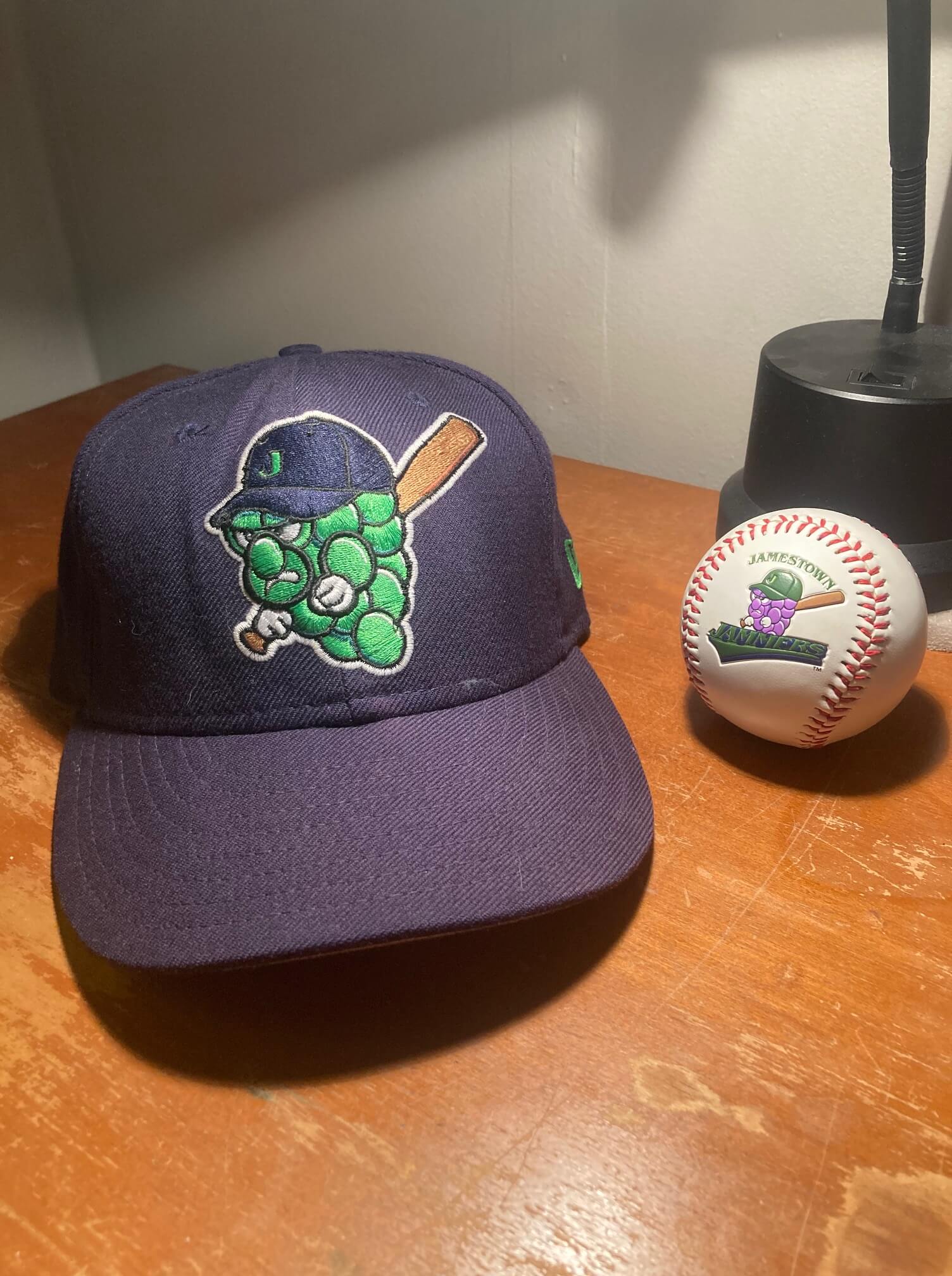 The grape theme Jammers were my favorite (not because I cling to an overly Romantic memory of summer nights at the baseball park during childhood I swear!) The batting grape was endearing. The theme was unique without being over-the-top absurd like a lot of minor league clubs. And bonus points for local relevance.

The Jamestown Jammers wore purple hats with green grapes and vice versa. Glad I had the foresight to snag a purple version as a kid. Take a look at Giancarlo Stanton in the fruity look. 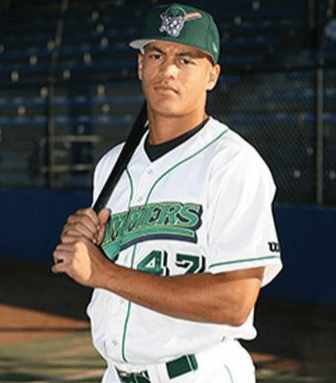 Jamestown baseball as an official Major League affiliate, sadly moved to Morgantown, West Virginia in 2014. Thankfully, though, municipal baseball wasn’t gone for long. It was announced that the city would host a new team in the Perfect Game Collegiate Baseball League (PGCBL), and their brand-new identity was revealed in 2020. 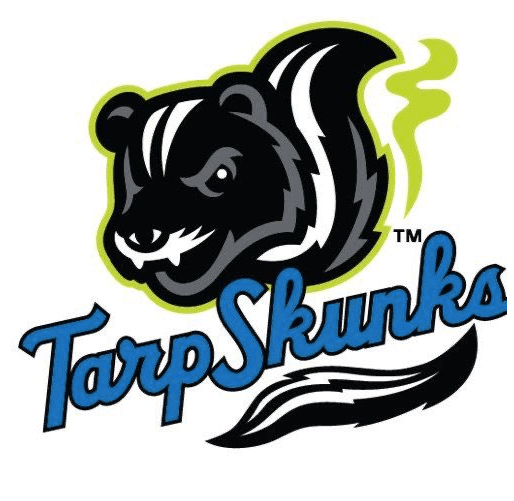 Bear with me. This time Jamestown doubled down on what management called “Chautauqua County baseball heritage” by choosing two names, both with hyper-local significance.

As the Jamestown Post-Journal put it, “‘Tarp’ refers to Howard Ehmke, a former county resident, MLP pitcher and 1983 Chautauqua Sports Hall of Fame inductee. He was the founder of the Ehmke Manufacturing Company, which produced the original infield tarp.”

And, “Skunks” represents a very common creature at Diethrick Park, one that has reportedly made a habit of ‘pestering and wreaking havoc on baseball team employees for decades at Diethrick Park; specifically living inside the infield tarp, and under the visiting’s bullpen’s bench. Skunks are also seen wandering the concourse in the evenings.’

I spoke to the groundskeeper and former member of the Jamestown Department of Public Works summer landscape helper who confirmed that indeed, skunks are a common foe at Diethrick Park. 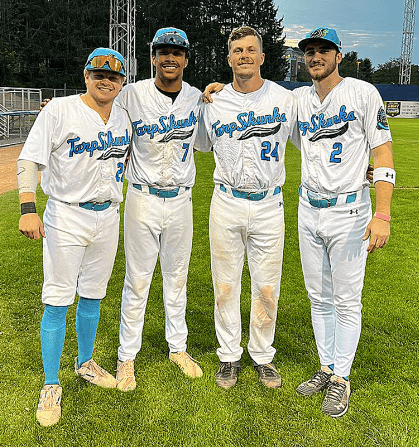 So there you have it. Almost a century of Jamestown baseball has culminated in the Jamestown Tarp Skunks. All told, the whole thing reeks of the kind of hokey American sports story I love.

Thanks Derek! That’s a nice look at almost 100 years of Minor League Baseball, and it’s all right there in your back yard. Fun story, and one I’m sure that is replicated in many a minor league town.

…that’s it for the morning edition. Big thanks again to Derek for that great story about MiLB in Jamestown.

Here’s a link to today’s Ticker.

I’ll be on the road for a few hours, but there will definitely be some additional articles today — keep checking back to see!

Everyone have a good Thursday.

This looks like an interesting discussion if you are in the Central Pennsylvania area on the 28th of August.

In 1893 the Carlisle Indian Industrial School started a football team, and for the next quarter century the team more than held its own against powerhouse schools like Harvard, Penn and Army. Using speed and deception, the smaller Indian team was able to beat their larger rivals. With an overall record of 167-88-13, the team became one of the most successful in the league until the school abruptly closed in 1918.
link

Sadly, Jamestown no longer has professional baseball, and hasn’t in the time since the Jammers left for West Virginia. Let’s not confuse summer collegiate ball – where players play for free and might do odd jobs around the community to pick up some money – with paid athletes.

As Jamestown is home of the weird Lucielle Ball Statue (cool), and Roger Goodell (Uncool), the little town an hour outside of Buffalo is gorgeous and has really interesting history. I highly recommend a visit!

Agreed! We used to drive to Buffalo and then Erie to visit relatives and we’d always stop in Jamestown to visit the Lucille Ball Museum.

The Expos didn’t convert to the racing stripe uniforms until 1980, and Dale Buzzard on the card is only listed as having one season in Jamestown (for that matter, in all of organized ball), 1989. Pretty steady run for a business where affiliations are about as stable as a kleenex in a gale.

That Jammers grape logo was just great, too bad they moved. Usually I am not too keen on weird team names just for the sake of being weird (Rumble Ponies, Babycakes and Trash Pandas come to mind) but in this case (and in the case of the Yard Goats) I like it a lot. Go Tarp Skunks!

I am another one with a ballpark in my backyard. Also a former MiLB park that now hosts a collegiate summer league team. Holman Stadium, Nashua, NH. Famous for hosting the first integrated pro team of the modern era, when they were the Dodgers’ affiliate and boasted Don Newcombe and Roy Campanella. If there’s a story behind our nickname (Silver Knights), I’m unaware of it. But a great place to see a ballgame, especially since I don’t have to worry about parking.