With the release of the 2023 MLB schedules, here’s an interesting observation by Dave Raglin on the discrepancies in how teams decide to post their schedules.

I always look forward to schedule release date, whether it is for MLB, the NHL, the NFL, or MLS. I look forward to seeing the schedules and making phone wallpapers for my favorite teams. In baseball, that is the Detroit Tigers and the Washington Nationals. Fortunately, both teams put out a vertical version of their schedule (two months across by three months down) which make it pretty easy to create good phone wallpapers.

However, I’ve noticed over the years that the teams lay out the months differently. The Tigers go across—March/April, then May, then down to June and July, then down again to August and September/October, like this: 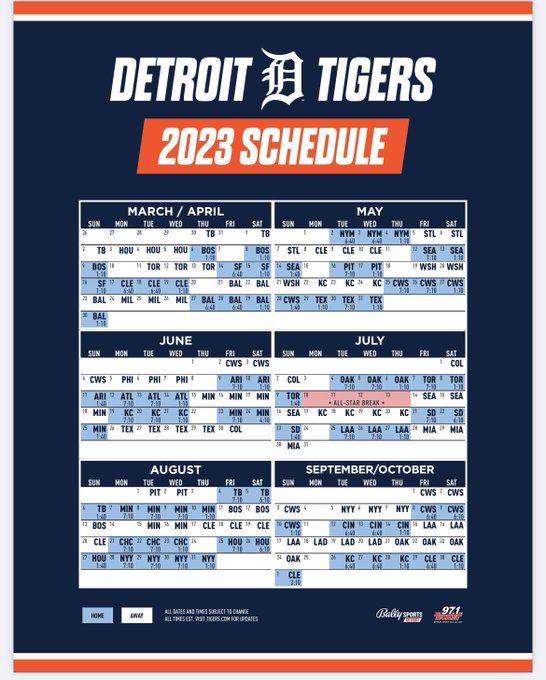 [Editor’s note: This is the schedule as presented by Bally Sports. The Tigers own schedule release looks different, as seen below. — PH] 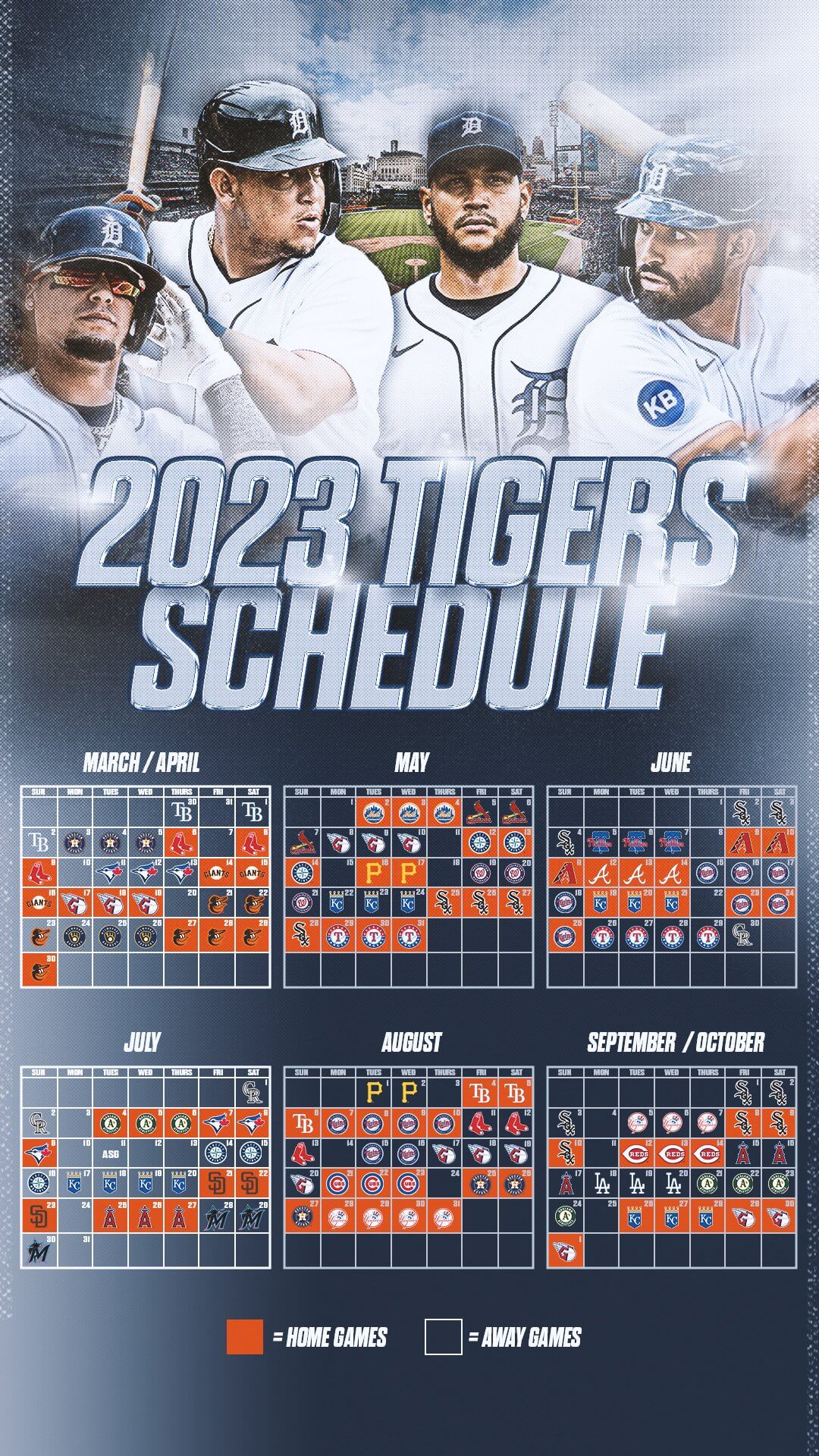 On the other hand, the Nats go down—March/April, then May, and then June down the first column and July, August and September/October down the second column: 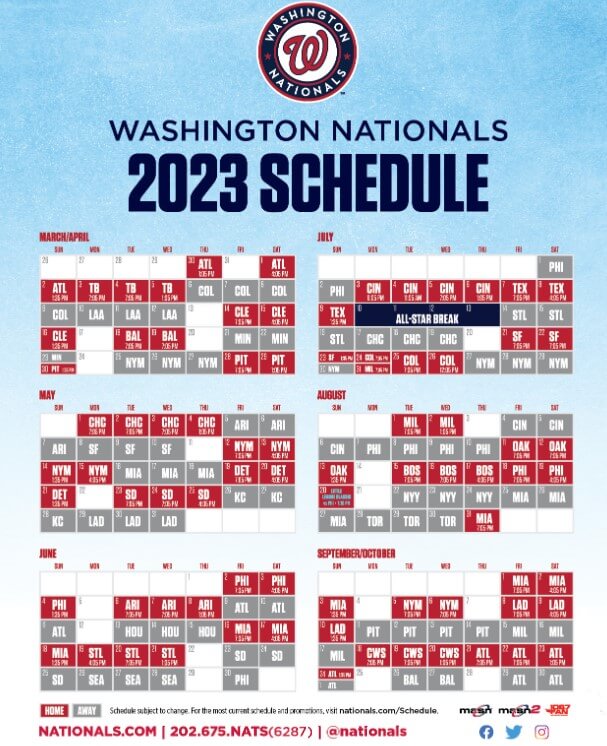 Then there are teams that go horizontal, two rows of three months each, like my wife’s team, the Red Sox. (The Yankees also post it this way): 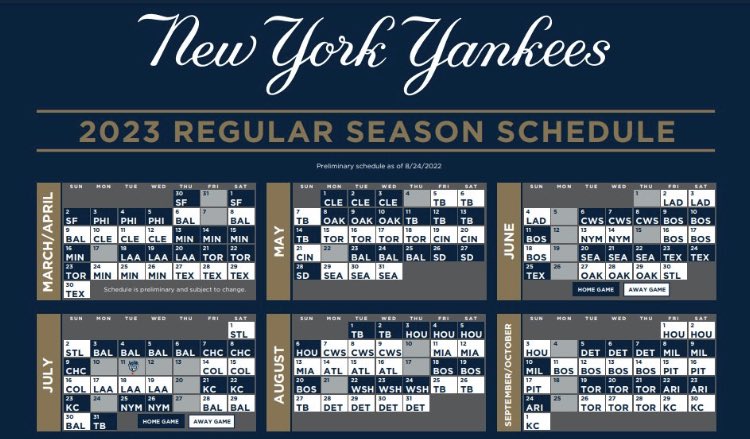 I decided to count how each team did their layout for their 2023 schedule. I looked at the Twitter accounts for each team and found the teams that put out the whole schedule in one calendar-like graphic. (Other teams posted the schedule in a series of pictures, did not post their schedule as a graphic that I could find. The White Sox creatively laid out their schedule as a series of 54 boxes, one for each series.)

So, here are the results for the 17 teams for which I found a full 2023 schedule in one picture:

The three examples posted examples remind me of something that always bothered me about MLB schedules, even going back to the days where you pick up your free pocket schedule at the gas station, which is most (all?) teams use a colored box to denote home games, despite the team primarily wearing white. It’s just one of those things that nags me.

At least the Nats’ schedule uses gray for the road games.

That just screams like a marketing thing, as to highlight the game the home team can sell tickets to the local population.

The Braves released a nifty schedule release video on social media, poking a little fun at several rival teams along the way.

For a few years the Dodgers schedule layout started with Monday, instead of Sunday. Very annoying.

I think it’s very annoying when calendars don’t start with Monday. Sunday is in the weekend, not the week start. And the purpose of Sunday first is to centre the working week and I don’t think we need to elevate work in that way.

I’ll add that the Tigers schedule above wasn’t issued by the team, but by Bally Sports Detroit, the regional channel that carries most of the games. The team issued schedule is here, and it’s 2×3 across, similar to the Yankees’ format.

Yes, I noticed that. The layout/look/fonts/etc. of the one tweeted by Bally Sports Detroit is the same as the one the Tigers have used for years; for example, here is the 2022 schedule on the Tigers web site. link.

I assume the Tigers created the schedule that Bally Sports Detroit posted.

PaulS, I meant to thank you for noticing that but I don’t think we can edit our posts. The schedule picture the Tigers sent out does look cool but putting a horizontal-style schedule on a vertical wallpaper makes it hard to read.

If you ask Phil nicely, he’ll go in and fix it when he has a chance.

Since the Tigers’ actual schedule .pdf is different than the Bally Sports’ one, I added in the Tigers one and made a note of the differences, so David’s text still flows.