While the special uniforms for the Army/Navy game have rightly garnered much attention over the past decade, for the past seven years, Air Force has been introducing a special “Air Power Series” set of uniforms that are every bit as intricate as those worn in the Army/Navy clash. This year, the team will honor the Space Force — the newest branch of the military. As you can see, the uniform is black and fairly plain, at least at first glance. But there are a lot of little storytelling details which we’ll go over. The helmet is Air Force Blue, but contains some black flake (as well as a sharp fade to black in the back) which can make the helmet appear black under certain lighting conditions. The front bumper contains the Roman numerals “MMXIX,” (2019) which is the year the Space Force was founded. The graphic image on the top of the helmet, running from front to back, is the lightning bolt. Rear bumpers for each helmet have one of four slogans: “COURAGE,” “COMMITMENT,” “CONNECTION” or “CHARACTER.” There is also the Space Force logo on the back of the lid. The front of the jersey features player name patch and some of the largest numbers I’ve ever seen. Perhaps they will be visible from space. The left jersey sleeve contains one of several patches of “Operational Deltas” at Buckley and Peterson-Schriever Afbs. The back of the jersey contains the motto Semper Supra, which is the new Space Force motto, meaning “Always Above.” Each player’s jersey will have this. Like the front, numbers on the back are huge. The right sleeve of the jersey features an American flag, but rendered in Air Force Blue and black. 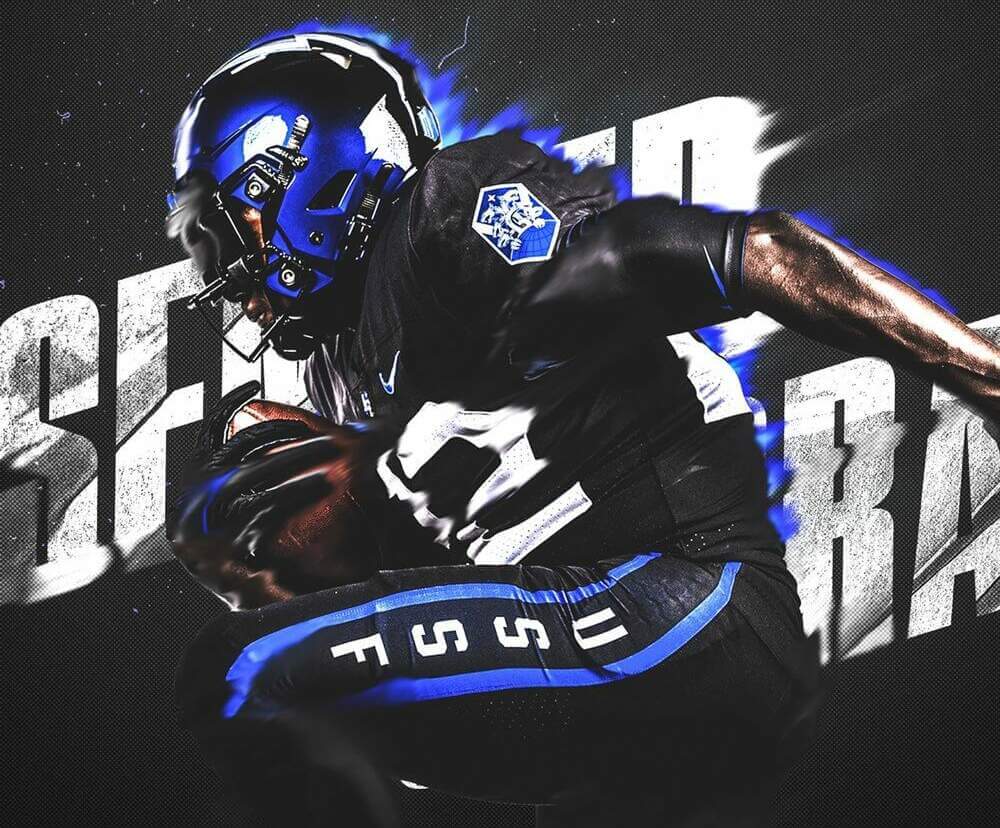 Here’s a look at the parts of the uniform: And of course, what uniform unveiling would be complete without a hype video?

Air Force will debut these uniform in their game against Navy, which takes place on October 1, 2022.

Doing well to highlight the “more is less” concept

It looks like the helmet has a gradient from blue to black.

Agree, it may also have black flakes, but based on the pictures it most definitely looks to be a blue (front) to black (back) gradient design.
Much like the Jags old helmet I don’t understand why they struggle to make them a gradual gradient. Most of the helmet is either blue or black, and only a small part is the gradient change over. While not as pronounced as the Jags since blue to black isn’t as dramatic as gold to black, it still makes it look more like two different shells put together, rather than gradual fade from one color to another.

The “USSF” on the leg make me cringe. The TNOL=Team name on leg (in the case, organization) is annoying.

I think the storytelling elements on uniforms are awfully cringe for just about every team other than service academies.

I think the DOD should rename the Space Force, “Starfleet”.

Big miss on this, especially the helmet. There aren’t lightning bolts in space. They could have had a black helmet with stars, or even the moon.

I mean, if you want a real space-themed helmet, you’d just do solid black, right?

The rest of the uni? Meh.

Thanks for the recollection of Psycho Blue from Power Rangers in Space. I need to go watch that now

Looks like they took they modified the AF logo after the Astros CC logo. Doesn’t quite look as good when you use two letters instead of one

Woof, these are terrible.

I actually liked this, until I saw the pants :(

Posing with these costumes among rocks makes me imagine Captain Kirk is going to materialize any minute.

Buckley and Peterson are Space Force bases now so the correct abbreviation would be SFB.