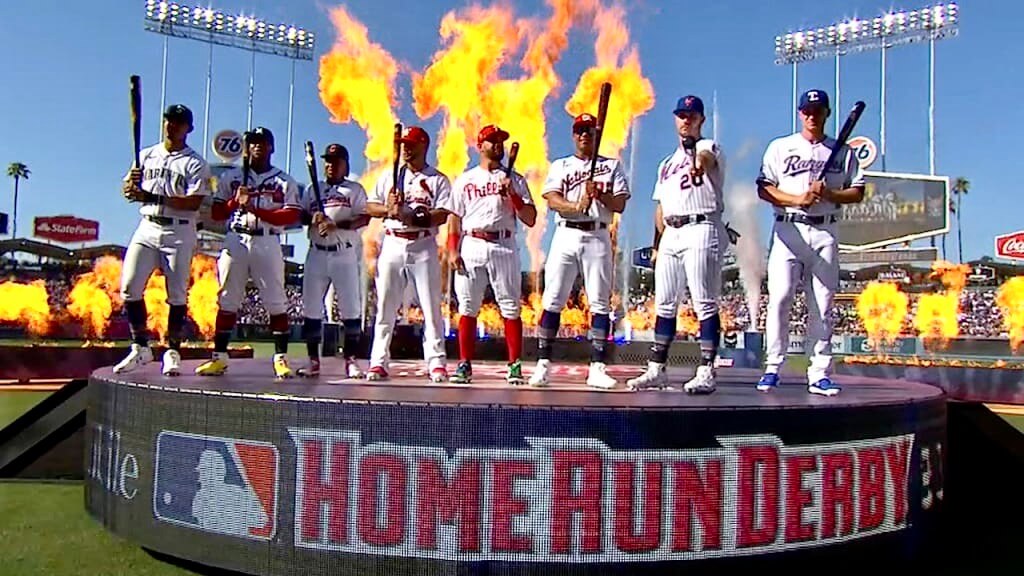 Good morning! MLB’s Home Run Derby — which is now a better-looking event than the All-Star Game that it’s supposed to be promoting — was last night, so I thought we’d start today by taking a look at that.

As has been the case for several years now, the Derby contestants wore their regular team uniforms (which they should be doing tonight in the All-Star Game, but that’s another issue for another day). Home whites for all participants, regardless of league. As you may recall, last year they wore No. 44 (for Henry Aaron) and Rocky Mountains-themed belts (because the Rockies were the hosts). This year they wore their regular uni numbers and regular belts.

Here are some additional notes from the event: 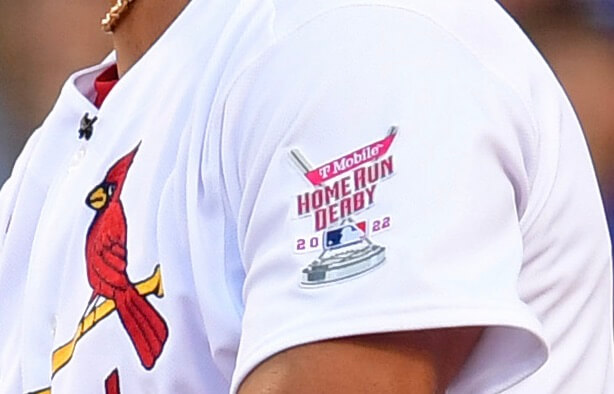 (My thanks to Trevor Williams for the Julio Rodríguez item.)

Reader Marcus Hall has generously donated funds for two raffles, so I’m going to run one of them today and one tomorrow.

For today’s raffle, one lucky winner will have their choice of either (a) $30 in credit toward any combination of a Uni Watch trading cards, seam rippers, magnets, chain-stitched patches, coasters, pins, and koozies, OR (b) one T-shirt from either the Uni Watch Shop or the Naming Wrongs Shop.

This will be a one-day raffle. USA mailing addresses only, sorry. To enter, send an email to the raffle in-box by 9pm Eastern tonight. I’ll announce the winner tomorrow, and then we’ll also have a separate raffle tomorrow.

Meanwhile, the winner of yesterday’s membership/magnet raffle is Shawn Dobbins. Congrats to him, and thanks again to Chris Hickey for sponsoring that one. Just scored this vintage nail clipper display to hang on the wall of the Uni Watch HQ bathroom. Really nice, right? I especially like the teeny-tiny serifs on the “Trim” logo lettering — they’re super-subtle, but they still add some unmistakable pizzazz to the proceedings!

What the Hell Is This?

My friend Vicky, who lives in Rhode Island, spotted this weird gizmo at a local Goodwill. Anyone know what it is? I love the look of it but have no idea what it’s for. Anyone..?

Is your gizmo a live spider trap?

Not a bad guess!

One organizational change I would suggest for the new site… Can you put today’s ticker directly under today’s stories? It took me a while to find it yesterday since there were the new stories up top, and then a bunch of stuff I already read, so I almost didn’t scroll down to the bottom. Otherwise, so far, so good.

Good call, I didn’t see the Ticker at all until I just read your post. I would suggest moving it just above the Recent Posts, but anywhere than where it is now…

I think the gizmo is a scalp massager.

If the teams are wearing their regular jerseys it would have been a lot better if they wore their regular hats. Players participating in an All-Star event and get to wear cheap-looking trucker hat versions of their usual hats?

Cheap looking, but sold at a higher price point of course.

Alonso’s cleats look very homemade…as if he did it himself or had a close friend do it. Anyone know more?

Congrats on the new design Paul. It is great now and I am sure will be tweaked even better. One suggestion…for me it really bugs me that the headline for each post or section is under the photo that introduces the section. My mind expects the headline to be above the photo, like Uni Watch always had it.

I found this on Alonso’s cleats:

You mean on the home page, right?

Exactly…because even on this page, which is specific to this post only, the headline is on top and for me anyway that’s what my mind now expects.

It really muddles it for me as I scroll down the homepage as to which story is with which photo…they all flow into the next.

Great feedback, Steve. I was planning on sending it too, that’s causes it to be hard to read for me and is my only main feedback for an otherwise great shift in UW design history.

There’s a subreddit dedicated to figuring out things like this: link

I think it an a head massager.