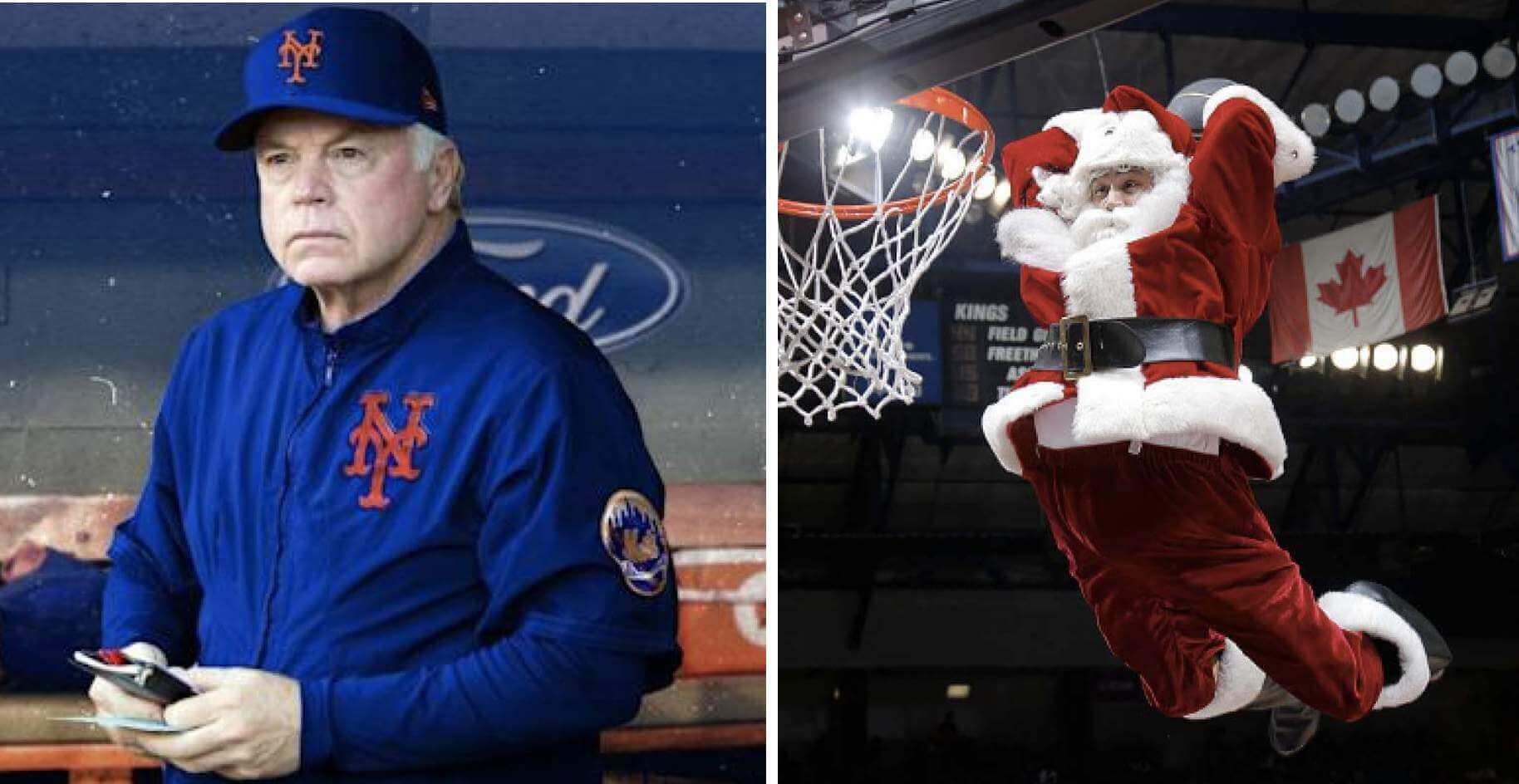 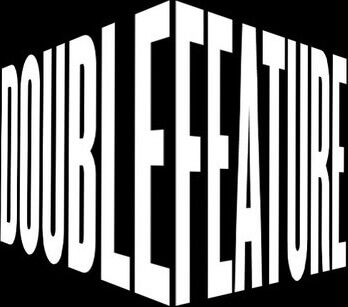 Ho-ho-ho, boys and girls! It’s a big day here at Uni Watch, because I have not one but two feature-length pieces for you today.

First, with the Mets introducing Buck Showalter as their new manager yesterday, I’ve taken a deep dive on Showalter’s history with athletics aesthetics, which is much more involved than that of the typical MLB skipper. I know some of you are probably thinking I only wrote this piece because it involves the Mets, but believe me when I say it’s not a Mets article — it’s a Showalter article, and I don’t mind saying that it’s one of the best things I’ve produced in a while. I hope you’ll check it out over on Bulletin.

Second, with the NBA’s annual slate of Christmas games coming up this Saturday (pandemic willing), I’ve ranked the league’s Christmas uniforms from years past and also ranked this Saturday’s uni matchups. You can read this one over on InsideHook.

That should keep you busy for a bit. Enjoy the double feature! 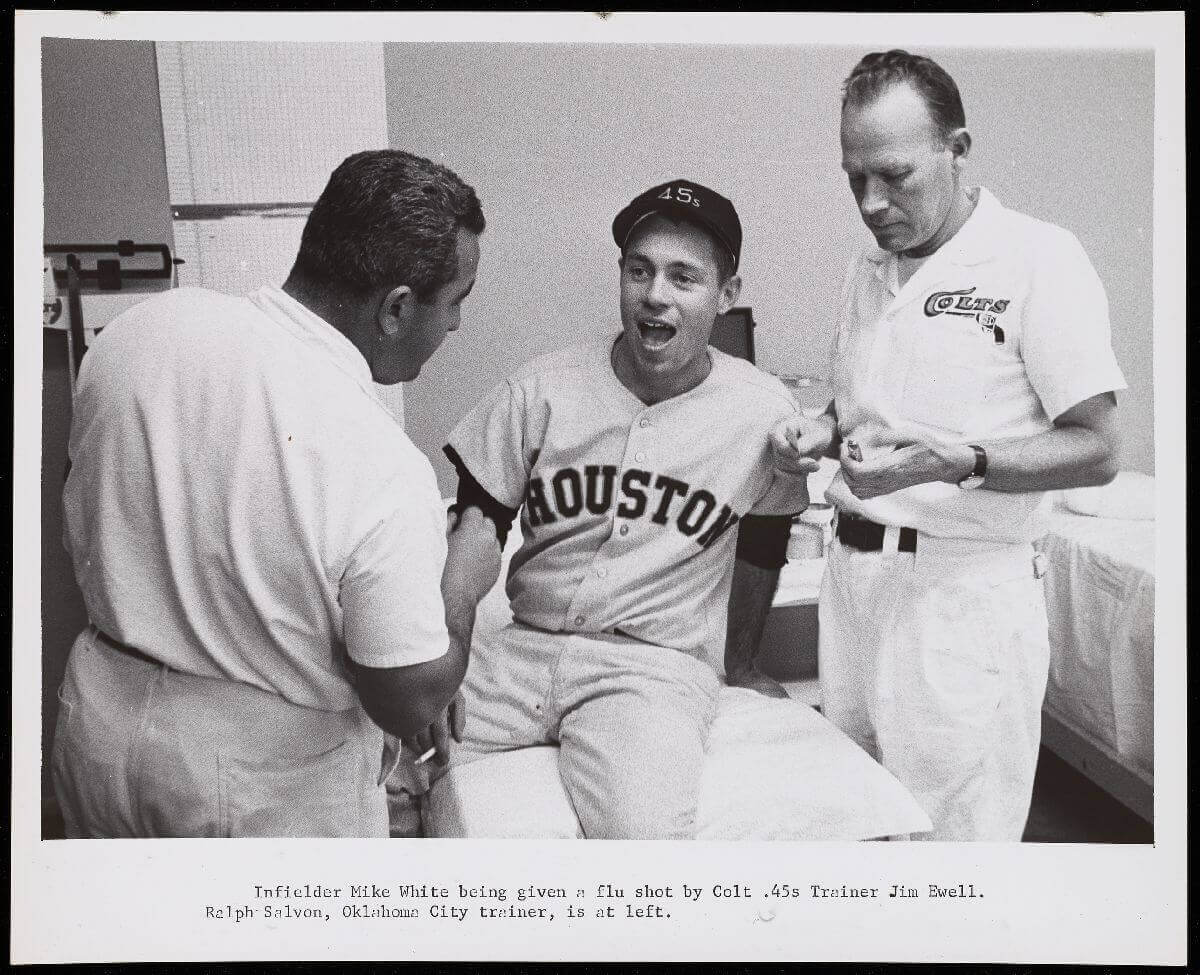 Vaccination in uniform: So many great things about this early-1960s photo of Colt .45s infielder Mike White getting a flu shot from trainer Jim Ewell. First, there’s the whole concept of receiving a vaccination while suited up in uniform — love it! Then there’s Ewell’s polo shirt. And then, although you have to look closely to see it, there’s the fact that White is receiving this shot while smoking a cigarette. Wow — different times for sure. 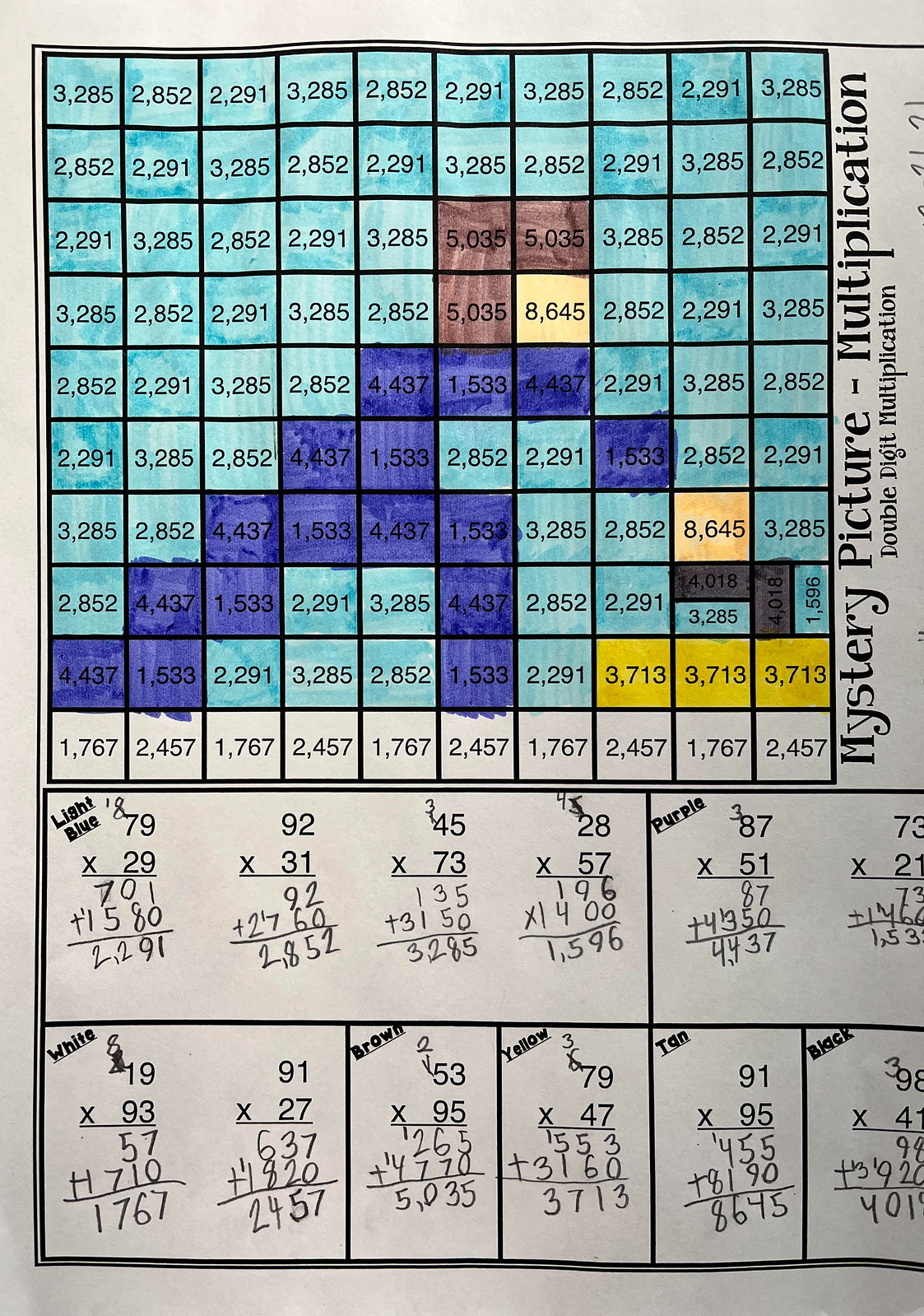 Hurry hard! Longtime Uni Watch reader/pal Marty Hick cemented his status as America’s Coolest Teacher by giving his fifth grade students a multiplication worksheet that, when filled out properly, revealed an image of a curler. How great is that? “We also watched footage of the USA team winning gold,” says Marty. So great! 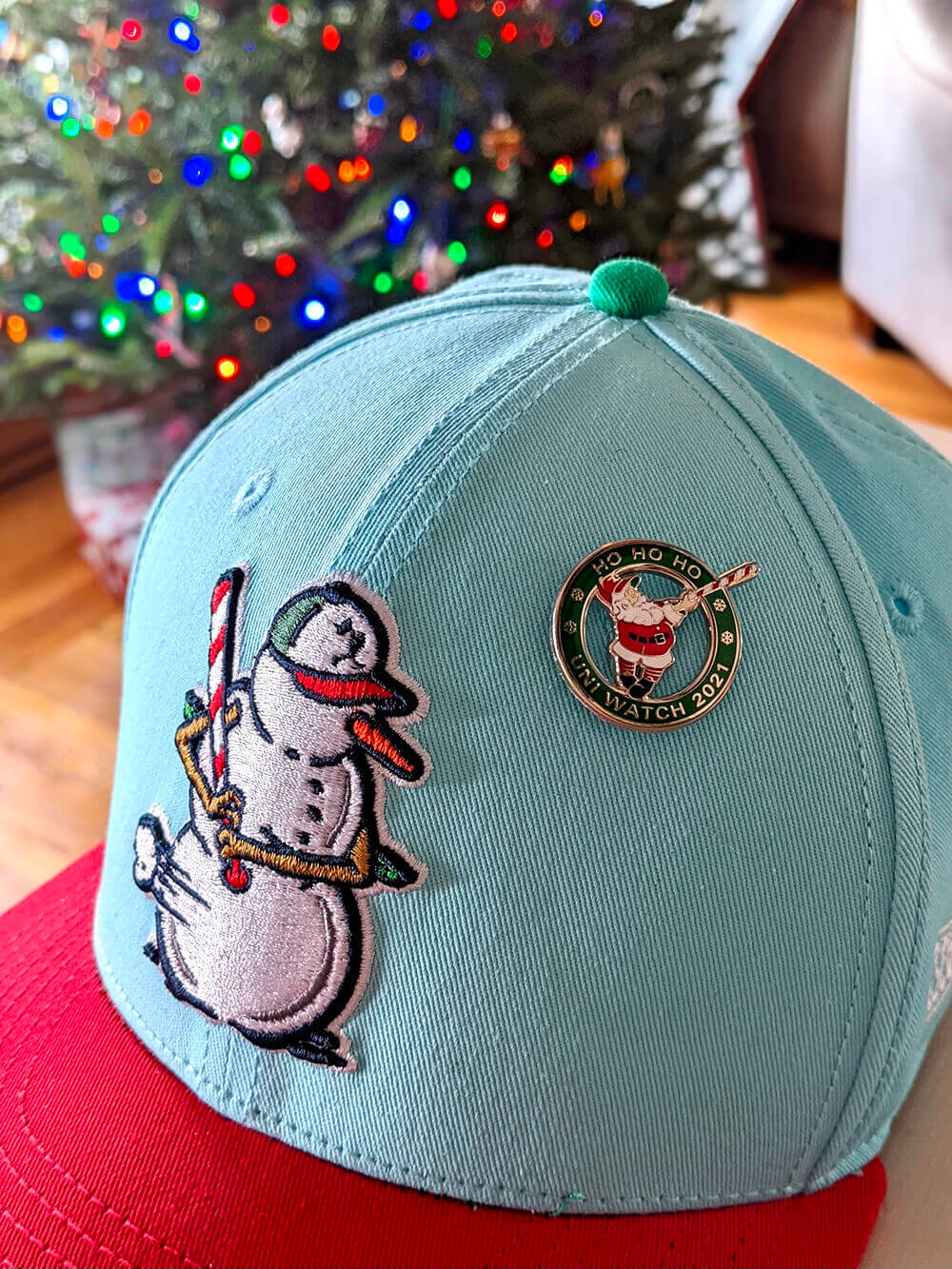 Two of a kind: Longtime reader/pal Dan Cichalski notes that his “Swinging Santa” pin pairs well with his “Swinging Snowman” cap from Baseballism. Good one, Dan!

While we’re at it: Dan also sent along some drawings he did in around 1989 or ’90, when he was about 13 years old, showing team logos with player names embedded in them (“I can’t figure out what the name in the Devils logo might be,” he says):

As always, I love childhood uni/logo artwork like this! 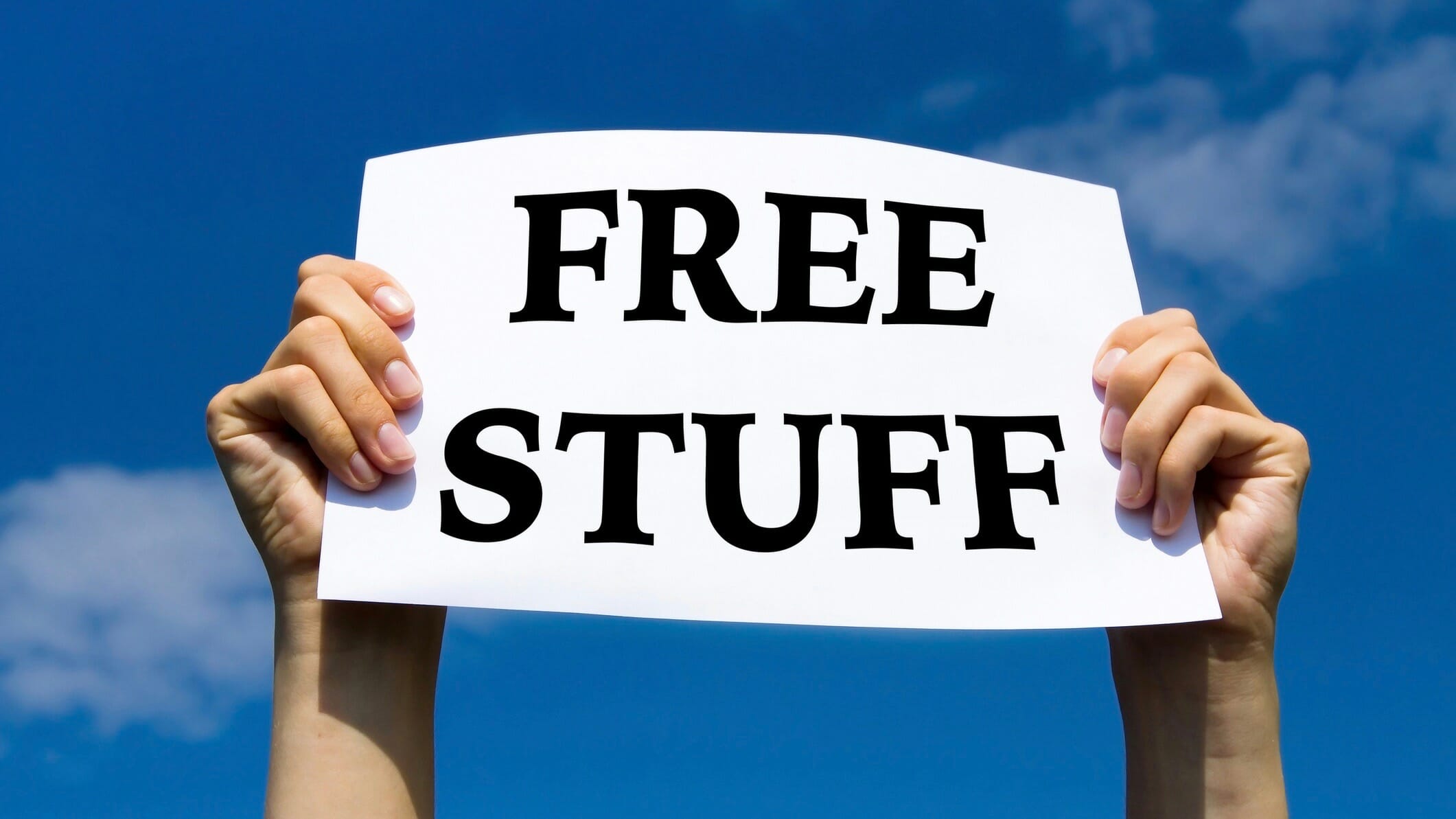 Too good for the Ticker: Uni Watch proofreader Jerry Wolper came across this amazing 1959 video clip from The Ed Sullivan Show, featuring the Harlem Globetrotters playing against the singing group the Ames Brothers (an unfair fight, obviously, so Wilt Chamberlain played for the Ameses).

By weird coincidence, the celebrity ref was Duke Snider, who was the subject of yesterday’s blog entry!

Baseball News: Here’s the backstory on how the Padres almost moved to Washington, D.C., in the 1970s (from our own Brinke Guthrie). … The Pirates have made a gingerbread version of their ballpark (from Trevor Williams). … Here’s a story about how a baseball signed by a bunch of Milwaukee Braves players connected two Southern California residents. Plus, the article has photos of some great semi-pro unis (from David A. Wishinsky).

NFL News: Mono-black for the Bengals this week (thanks, Phil). … The WFT reportedly wants to build a new domed stadium in northern Virginia. The team’s lease at its current stadium expires in 2027. … Speaking of WFT, they will bring heated benches with them for their final three road games. … Here’s Jason Von Stein’s illustration showing this week’s mascot/uni matchups. … A New Jersey man has pleaded guilty to impersonating then-Pats QB Tom Brady in order to obtain “Super Bowl family rings,” which are available to families of the players (from our own Brinke Guthrie).

College Football News: Kent State and Wyoming both wore yellow pants yesterday in the Famous Idaho Potato Bowl, and fans weren’t happy about it (from multiple readers). … Black/white/black for Mizzou against Army in the Armed Forces Bowl (from Matthew Reitman). … UTSA wore San Antonio’s area code, 210, on their helmets in the Frisco Bowl last night (from Bob Hille). … Cincinnati will wear black/white/black vs. Alabama, who will wear crimson/crimson/white, in the College Football Playoff Semifinal (from our own Phil Hecken). … Also from Phil: Kansas State will wear a wildfire recovery helmet decal for the Texas Bowl. … White helmets for Ole Miss in the Sugar Bowl. More details here (from multiple readers). … Teamwork: Michigan players will get their booster shots as a team today.

Hockey News: New alternates for the Vancouver Giants of the Western Hockey League (from Wade Heidt). … Oilers F Zach Hyman received a Lego jersey with his NOB in Hebrew (from Kevin Brewer).

Basketball News: SportsLogos.net has confirmed a leak indicating that the Suns are bringing back the “shooting sun” design next season. … NBA numerologist Etienne Catalan has the latest in NBA uni number assignments. … Since registering “Greek Freak” as a trademark in 2018, Bucks F Giannis Antetokounmpo has filed over four dozen trademark-infringement lawsuits. … BFBS last night for Stanford women’s (from Rick Johnston). … GFGS (or officially, pewter) for Utah State men’s last night (from @akaggie).

Soccer News: New third shirt for English side Wigan Athletic (from Trevor Williams). … New sleeve advertiser for Inter Miami (from Noah Berger). … Paris Saint-Germain has a Theragun massage gun with their logo on it (from Steve Kriske). … North Carolina is making Charlotte FC license plates available (from James Gilbert). … New home and away kits for the J1 League’s Sanfrecce Hiroshima (from Jeremy Brahm).

Grab Bag: David Blitzer, who already co-owns the NHL’s New Jersey Devils and the NBA’s Philadelphia 76ers, is reportedly close to acquiring a 35% stake in MLB’s Cleveland Guardians. Has anyone ever simultaneously owned parts of three different teams in three different leagues and three different states? … Lithuanian boxer Vaida Masiokaite wears green, red, and yellow trunks in the ring, which are the colors of the Lithuanian national flag (from Graham Clayton). … Here’s a really engaging article about how a small company in Pennsylvania made most of the Christmas ornaments during the 1940s and ’50s (from Gerry Dincher).

Former IL Gov. Bruce Rauner was a minority owner of the Bulls, Steelers, and Red Sox. I’m assuming a) he still is and b) the stakes are relatively small.

I think Buck Showalter implemented “coaches caps” with the Yankees in spring training in 1993. In that year’s yearbook, a couple Yankees coaches were pictured with white Yankees caps and I had to figure it was a Showalter thing to make the coaches easier to identify.

Interesting. If you have that yearbook, Brian, could you send some pics to me? link

He also did this with Baltimore. Coaches would wear the white paneled home hats, while the players wore the black/orange spring training hats.

I was almost certain that Jim Ewell was holding a martini in his right hand in that photo. It wouldn’t have been out of place in such a photo, either.

Cleveland has had some interesting sports owners over the years. Randy Lerner owned Aston Villa while owning the Browns (and did poorly with both), the Gund family owned the Cavs and a NHL team, current Browns owner Jimmy Haslam had to divest his minority interest in the Steelers and KC Royals owner John Sherman owns the piece of the Guardians being sold to Blitzer. The majority owners of the Guardians, the Dolan family, is of course related to the same Dolans that own the Knicks.

“A New Jersey man has pleased guilty to impersonating”

One of the Ames Brothers live a few blocks from me…on Ames Ave!!

It seems like Ole Miss would benefit from taking the final step and just becoming a powder blue + red team. They have some beautiful options incorporating the powder blue, but the navy options alongside them takes away from the overall cohesion.

especially notable when you consider LeBron James, who plays in the NBA and has never played in any of those cities, has stake in the Fenway Group

No matter what we come up with for the owner-related trivia question, City Football Group has them beat because they at least part-own soccer clubs in 10 different countries.

Lamar Hunt also comes pretty close because he owned Kansas City (in the NFL) and the then-Wizards, Crew, and FC Dallas in MLS.

There’s no City Football Group team in either Africa or Antarctica. It’s like they’re not even trying. I would be a McMurdo City ultra.

McMurdo City is a concept jersey I’d love to see!

Makes me think of a hi-vis red with sublimated fur-looking brown or gray around the neck, and a crest with the True South flag in the middle:

I think hi-vis red might be more of a McMurdo United thing.

Not exactly GFGS with the Utah State Aggie’s “pewter” uniforms. Our official colors are navy, grey/silver, and white. I admit we’ve done WAY too much BFBS lately and I’d love to see that go away, but I really liked the “pewter” uniforms and they are definitely within our color palette.

The first thing I thought of when I turned on the Kent St.-Wyoming game was my grandmother’s 1970’s color TV. She watched it very little during the week, so when we visited on Sunday, the color settings had slipped enough to look like last night’s game.

To be fair, Wyoming under Craig Bohl cut down it’s uniform inventory. They wear White/Brown/Yellow at home and White/White/Yellow on the road. That’s it.

Kent State, on the other hand has multiple helmets, multiple jerseys and multiple pants. Looking from this year, they could have gone all white, blue/white/white or yellow/white/white.

This was Kent State’s fault.

I thought it was a fun choice for a Bowl game. More so than regular season. I mean, if we’re forced to accept the premise that Wyoming and Kent (Ohio) should play a game in Idaho 3 days before Christmas and possibly during the middle of finals, sure, mono-mustard versus Wyoming’s unique look is not the travesty.

Thank you for sharing Paul.

It was years before I ever saw Showalter wearing just a jersey. He usually never took off his jacket, no matter how hot is got.

Question: So is it now going to be: “The Northern Virginia Washington Football Team?”

Not that the enabling legislation discussed in the article is likely to pass anytime soon, but they’re looking at some very far-out sites for a stadium. Not that long ago, locals would argue the point if you referred to Loudoun County as even part of the DC metro area. And Prince William is squarely on the suburban fringe of DC, but the 95 corridor is pretty filled-in and has recently seen multiple stadium projects blocked by local NIMBY efforts. Out along the 66 corridor is more promising in terms of land availability and the weakness of local NIMBY folks, but for most in the DC area, might as well put the team in Fredericksburg as Bristow.

I’m thinking about buying this jersey for myself, but wanted to know if you all think that there’s a possibility that this is actually one of Zorich’s rookie jersey: link

The “7” just doesn’t look right. Too much curve on the downslope.
Caveat emptor…

“9” is wrong too. In fact the numbers on front and back look Photoshopped.

Dan, you were ahead of your time with these player logos! Here in Pittsburgh, a quick trip to the Strip District will find player-branded stuff at the outlets that don’t have the officially licensed stuff!

Fantastic retrospective on Showalter, Paul! I was always a bit disappointed that the Diamondbacks’ initial uni combos barely even saw on-field use, and wonder how much he had to do with that.