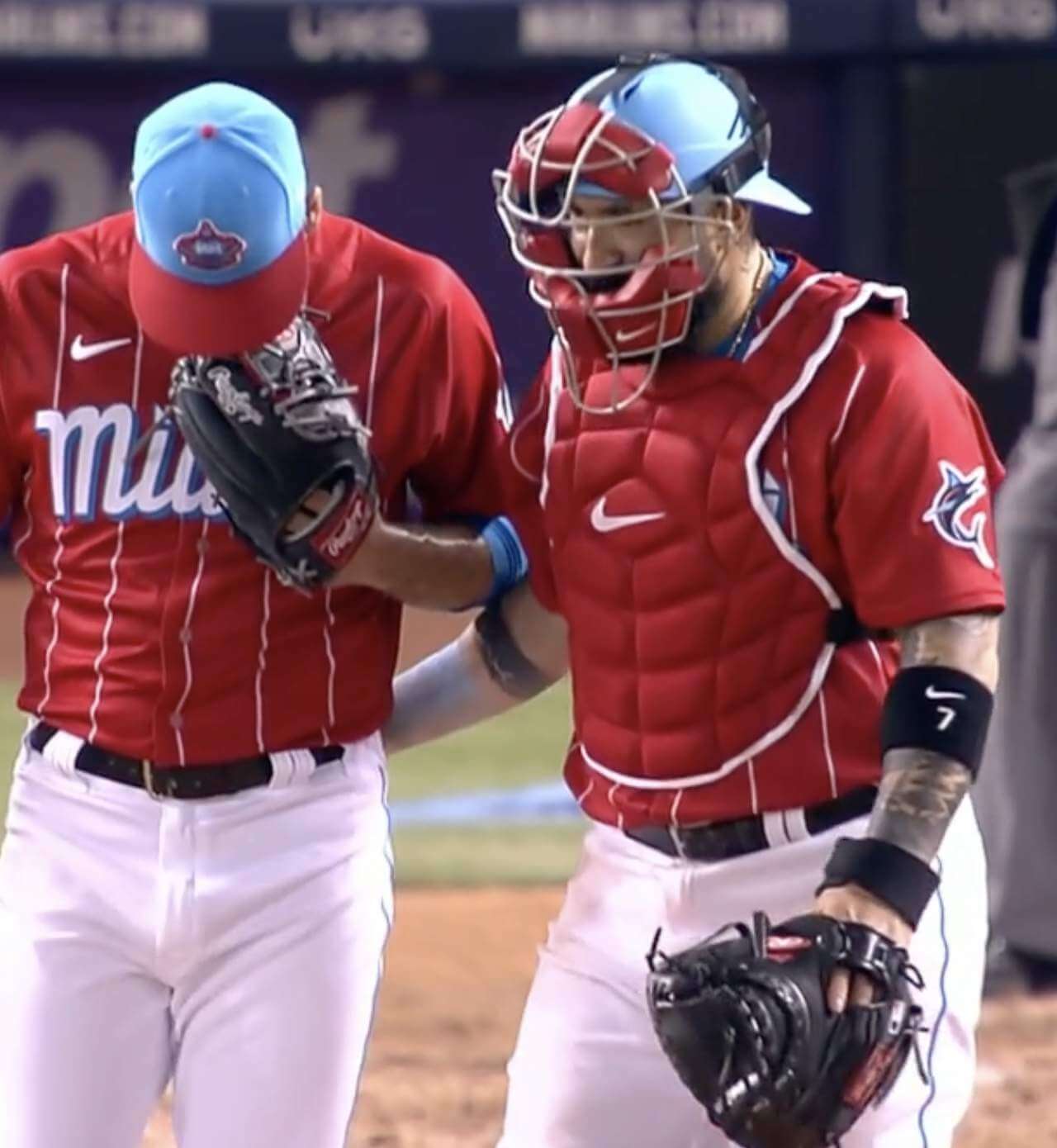 Good morning! Hope everyone had a good weekend.

Now then: About two weeks ago, the Tugboat Captain and I were watching a Mets/Marlins game from Miami. At some point during the game, Marlins catcher Sandy León went out to the mound to chat with his pitcher, as shown above.

Take a close look at that screen shot — see how León’s hand isn’t fully inserted into his catcher’s mitt? It almost looks like the mitt is about to come loose from his hand, right?

A second later, the mitt did come loose — but it didn’t fall to the ground. Instead, it swung freely from a strap connected to one of León’s wristbands: 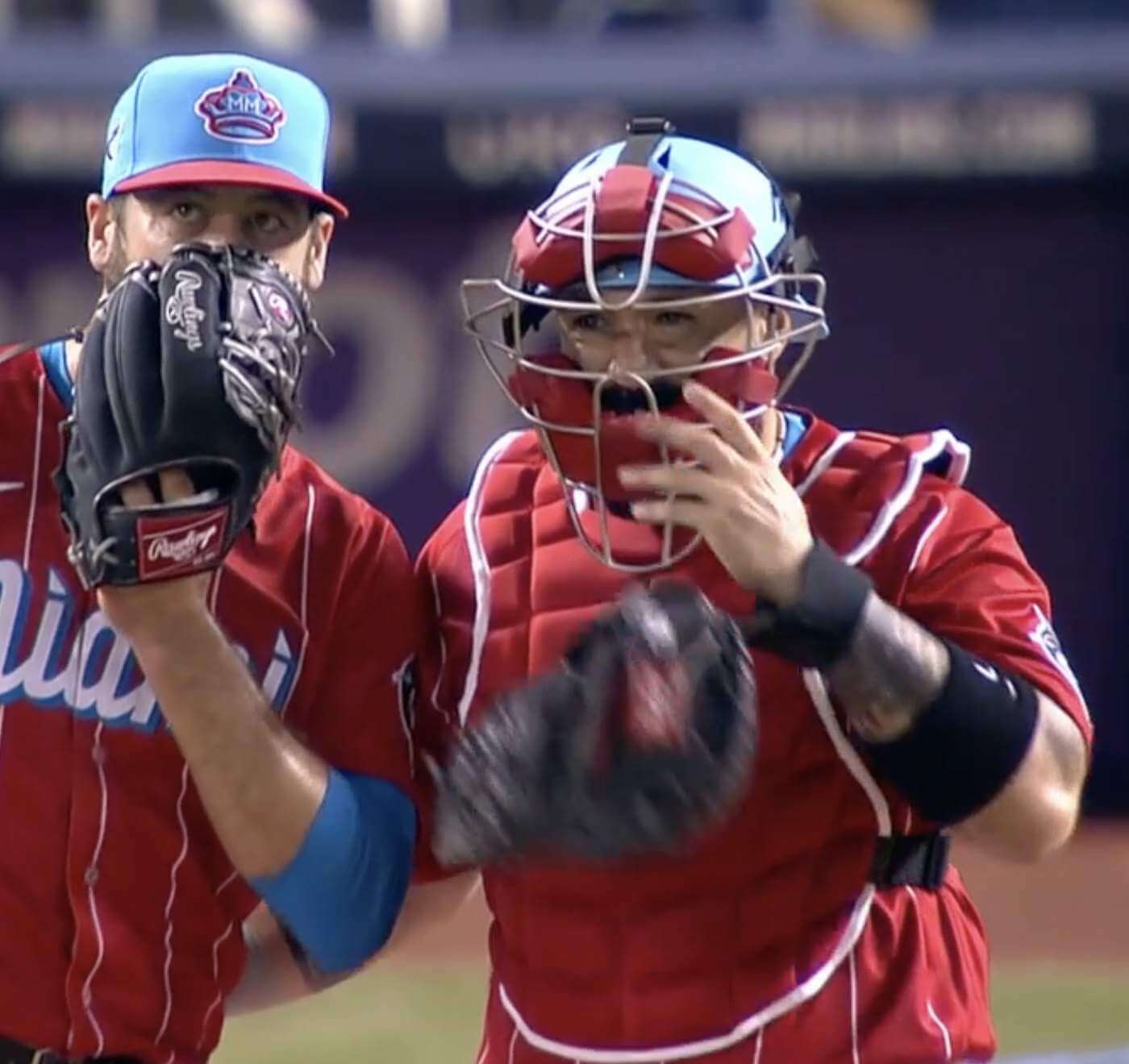 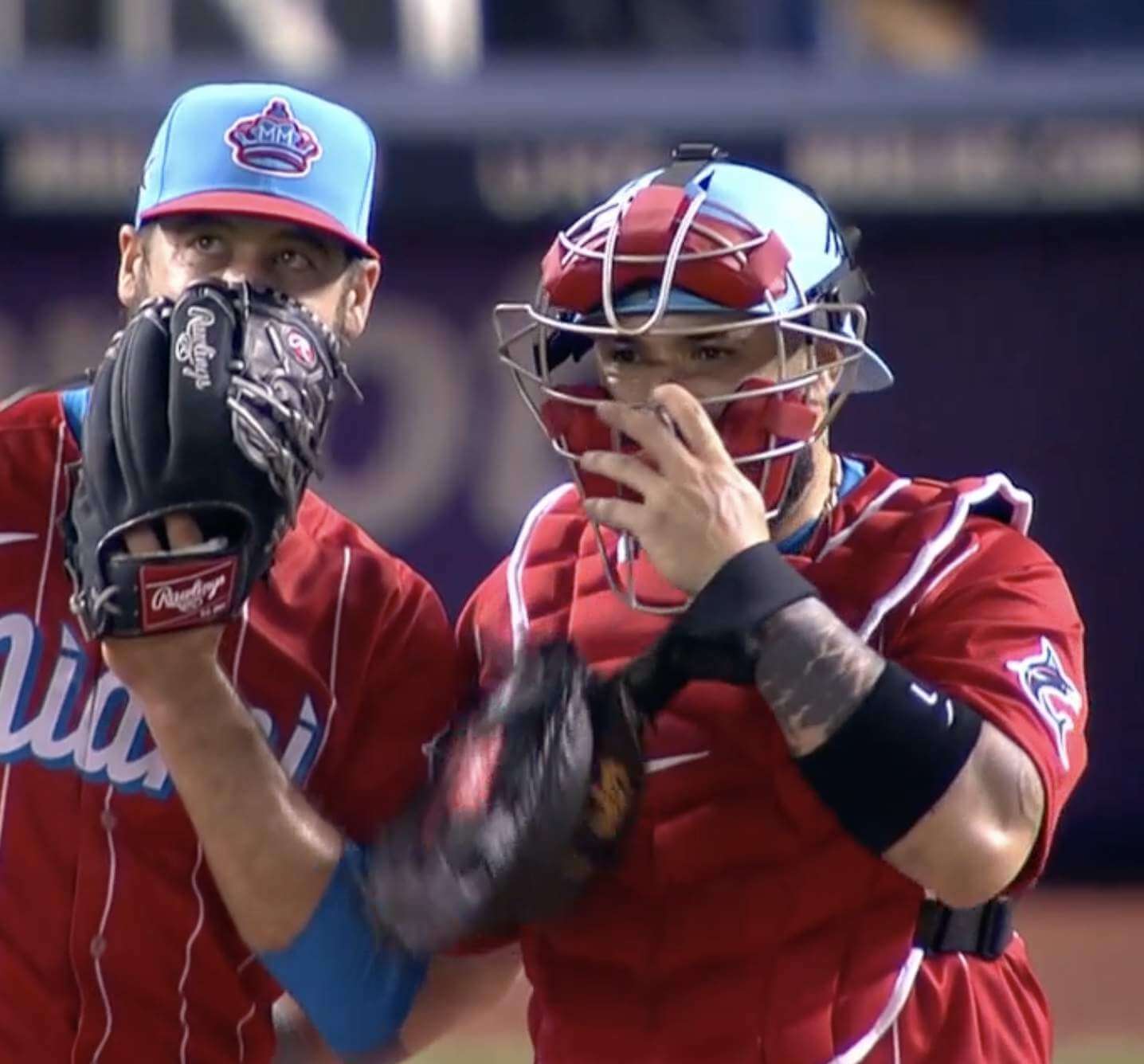 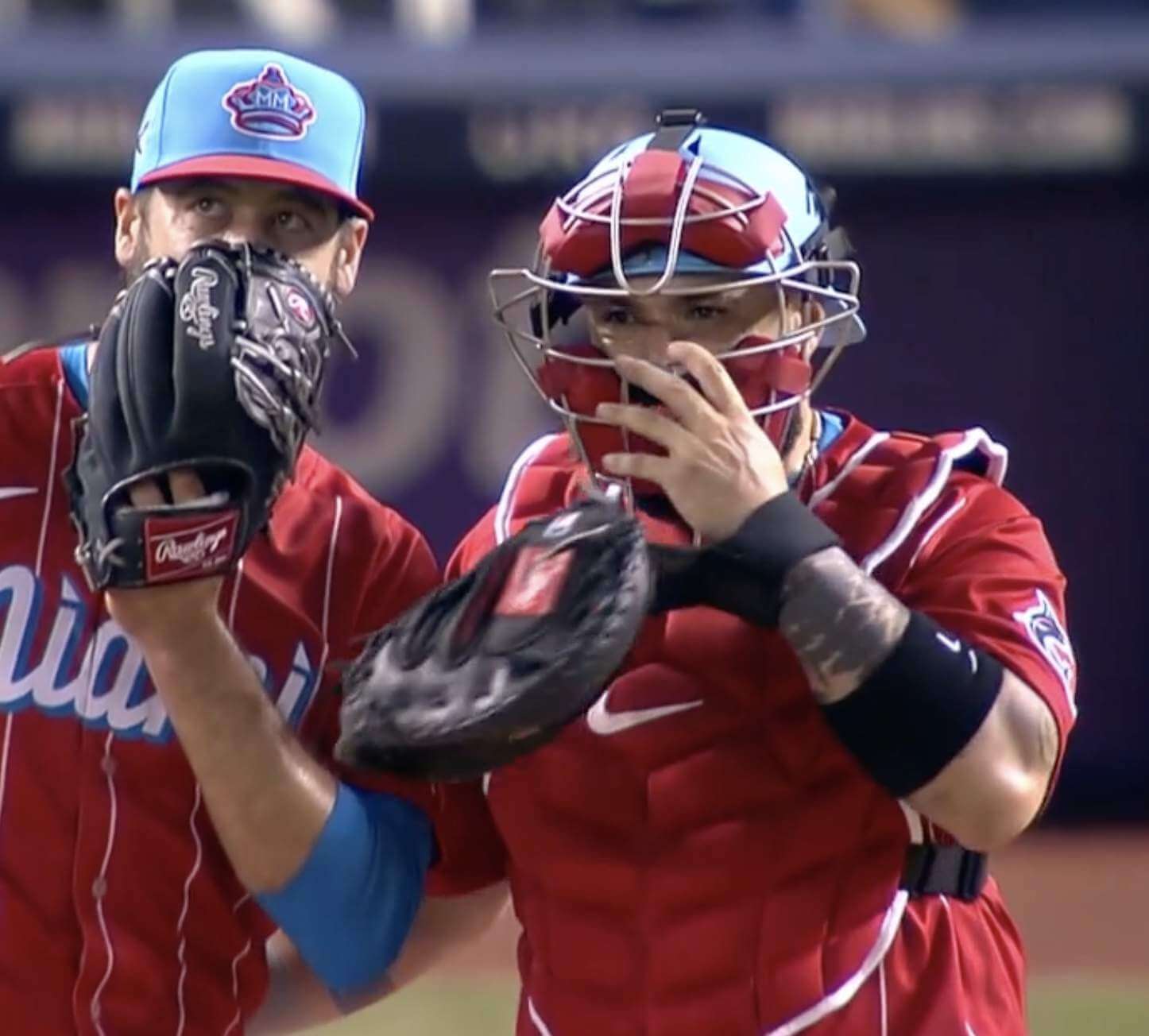 This was visible on the TV screen for only a couple of seconds, but Mary and I both noticed it immediately. “What’s that on his glove?” she said. I didn’t have a good answer, because I’d never seen anything like that before.

León has been in the big leagues since 2012. Had he been wearing this mitt attachment for all those years and I just hadn’t noticed? I dove into some photo research and determined that he began tethering his mitt to his wristband in 2018. Here’s a shot of his mitt dangling from his wristband on Sept. 4 of that season, when he was with the Red Sox: 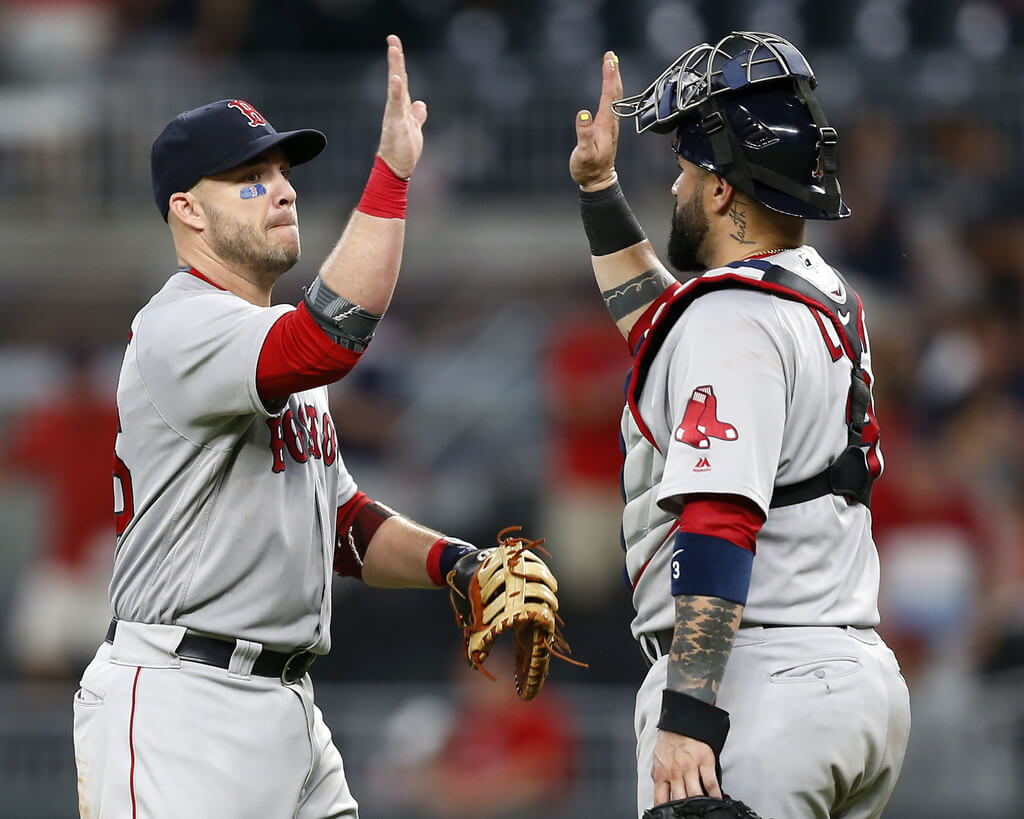 Here’s another “dangler” shot, this one from a spring training game on March 3, 2020, by which time León had been traded to Cleveland: 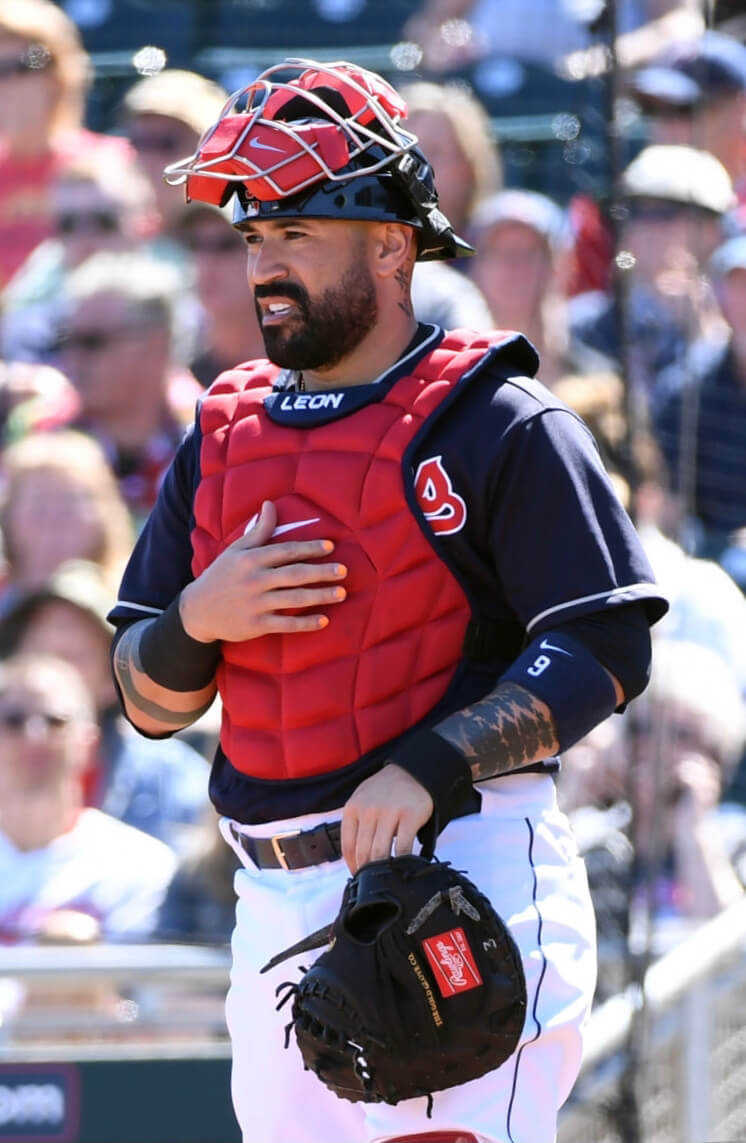 Again, I’d never seen anything like this, so I got in touch with the Marlins and asked if I could interview León. Instead, a team rep spoke with León and came back to me with this:

Spoke with Sandy. He said he picked it up from [Cardinals catcher] Yadi Molina, who wears something similar. He actually wears it more for protection over his wrist bone to protect when he blocks the ball in the dirt from bouncing up and hitting the bone that is exposed right above the glove.

Faaaascinating. Naturally, the next thing I did was start looking at photos of Molina. Did he really wear the same kind of wristband/strap accessory? Sure enough: 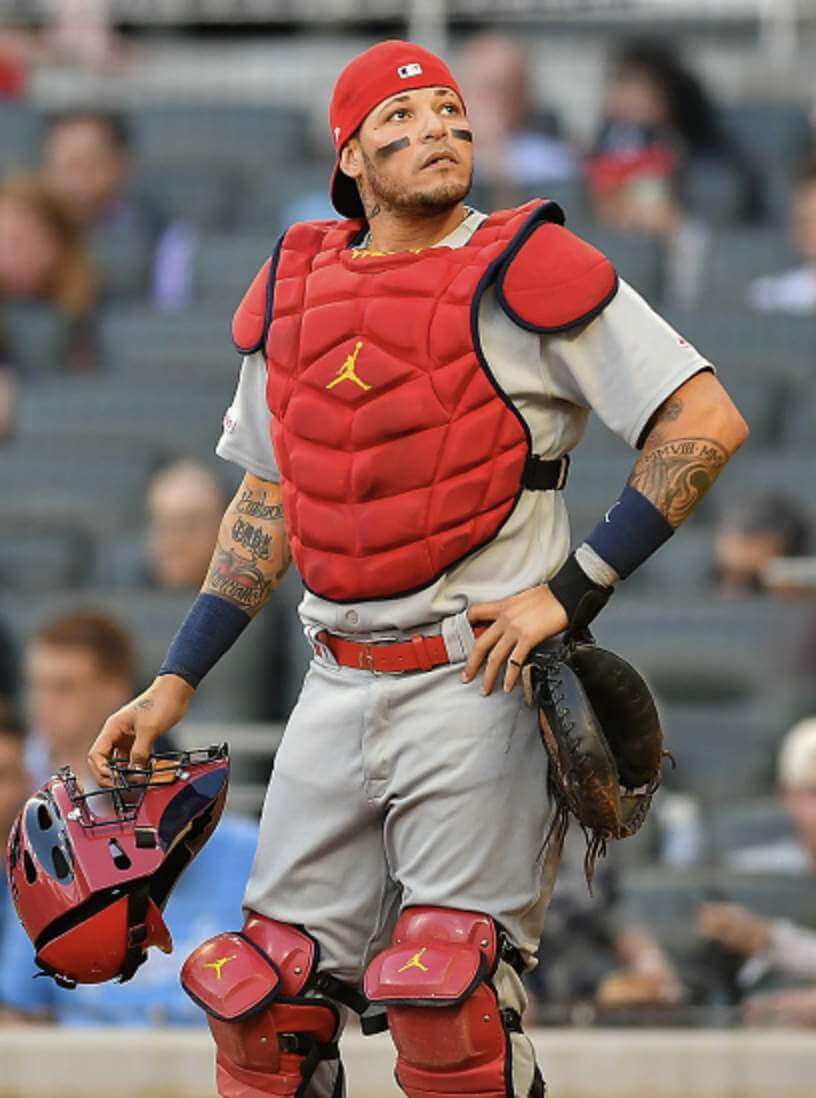 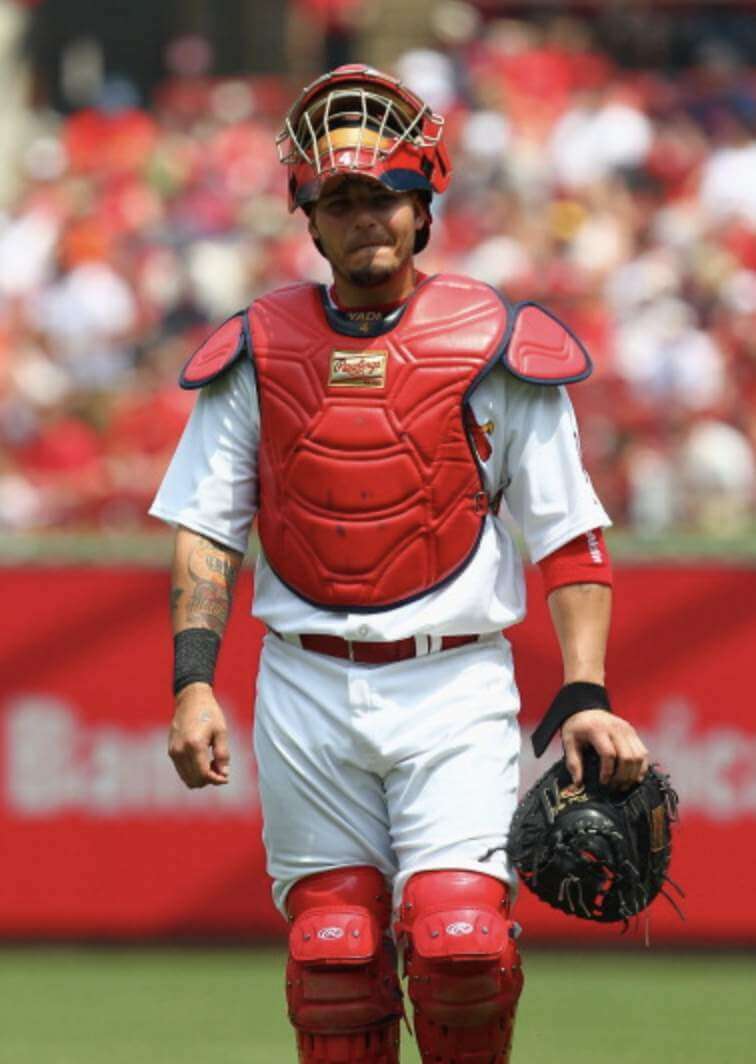 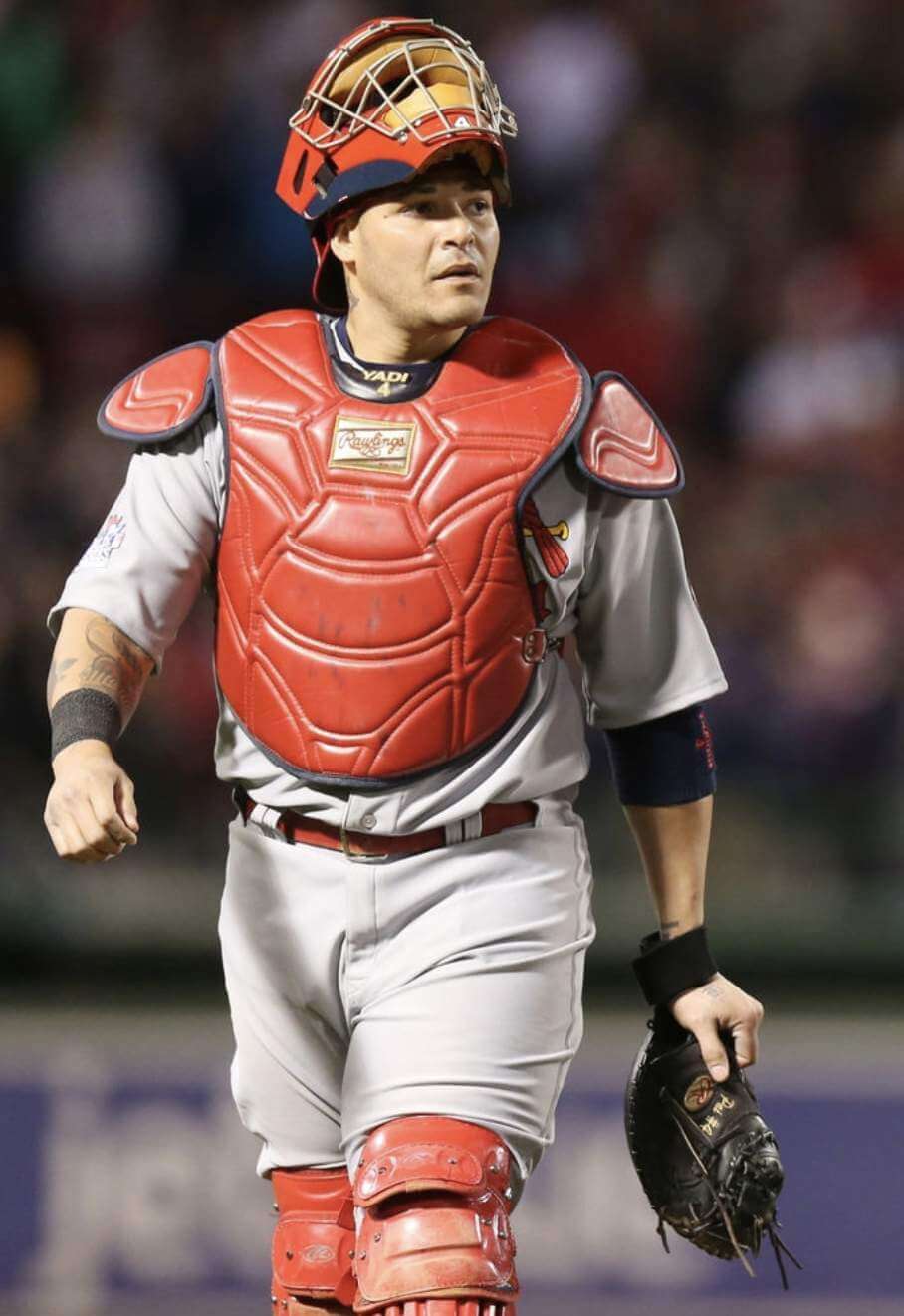 The second and third shots in that last sequence are from 2013, so this definitely isn’t a new accessory — I just hadn’t noticed it until now.

And wait, it gets better! While looking for photos of Molina, I noticed that Royals catcher Salvador Pérez also appears to wear this same accessory. I couldn’t find a “dangler” photo of him, but he definitely seems to have the same wristband attachment: 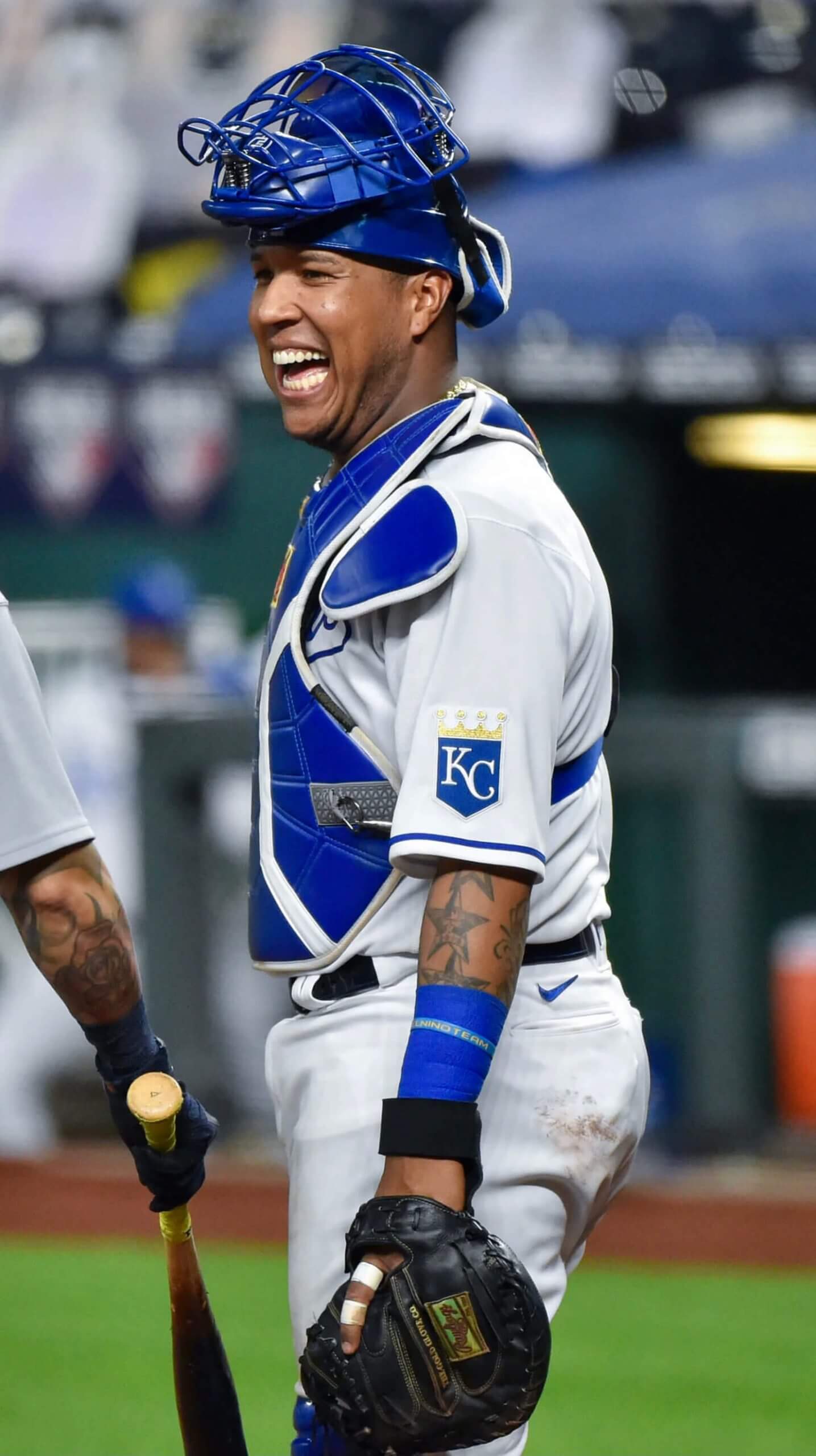 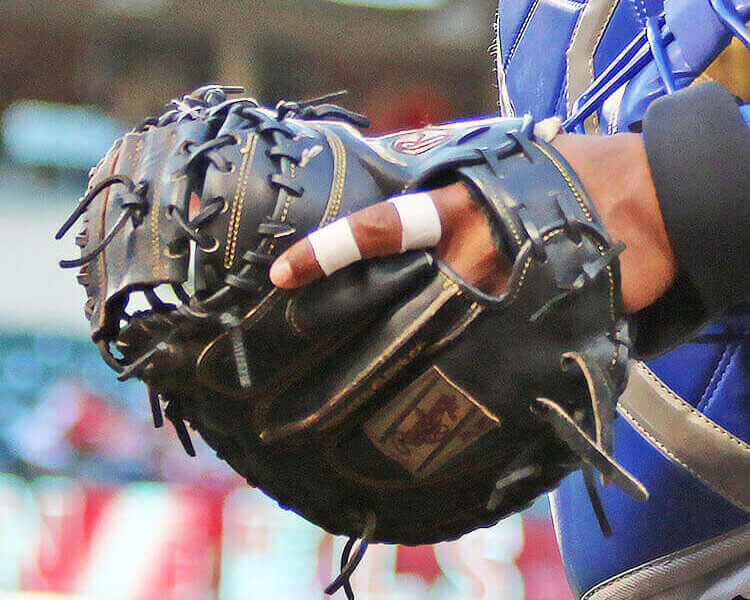 By this point I began to realize that this accessory was more widespread than I initially assumed. A bit more digging led me to the website What Pros Wear, where I found some photos that show how the wristband attaches to the mitt: 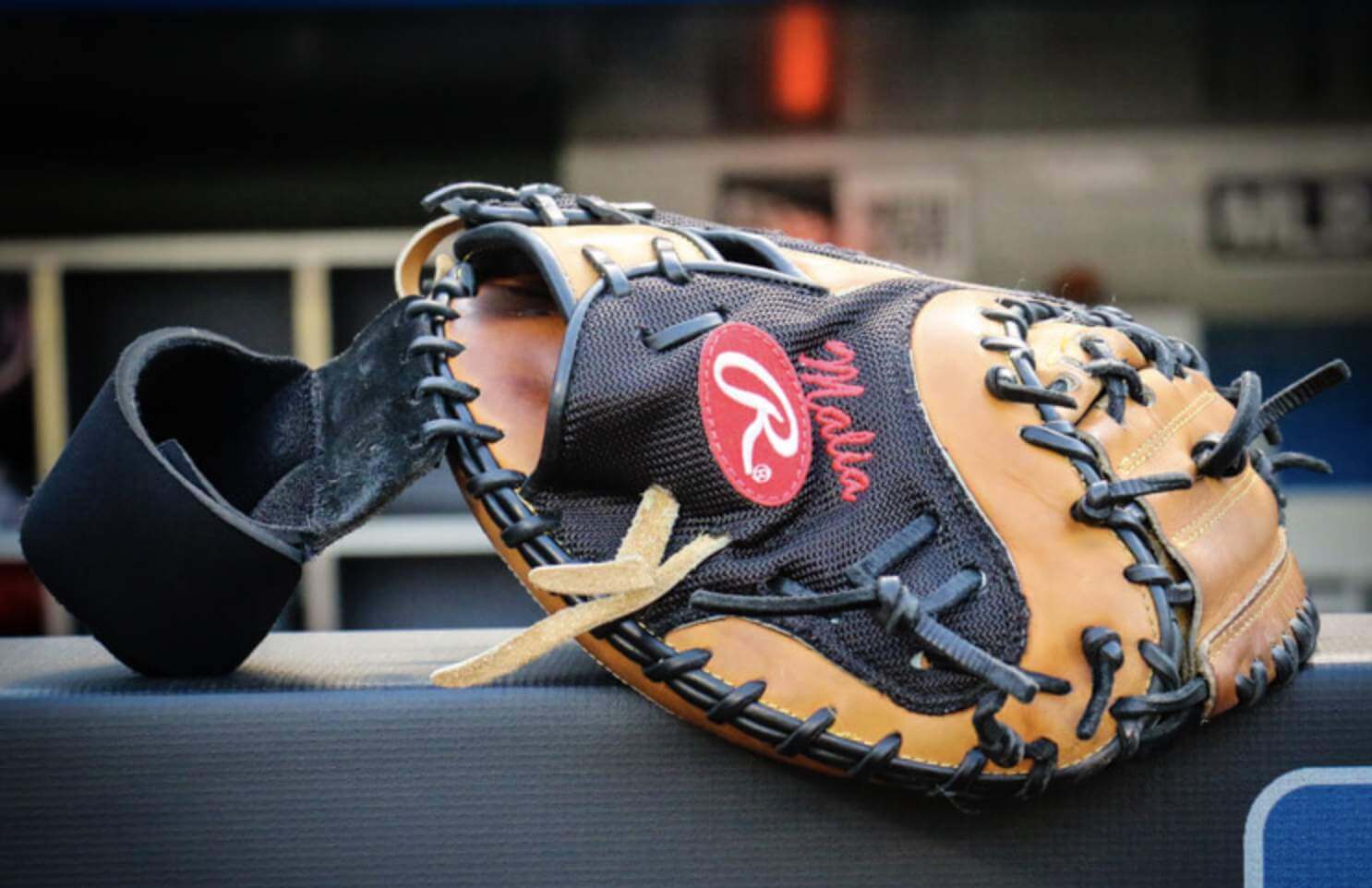 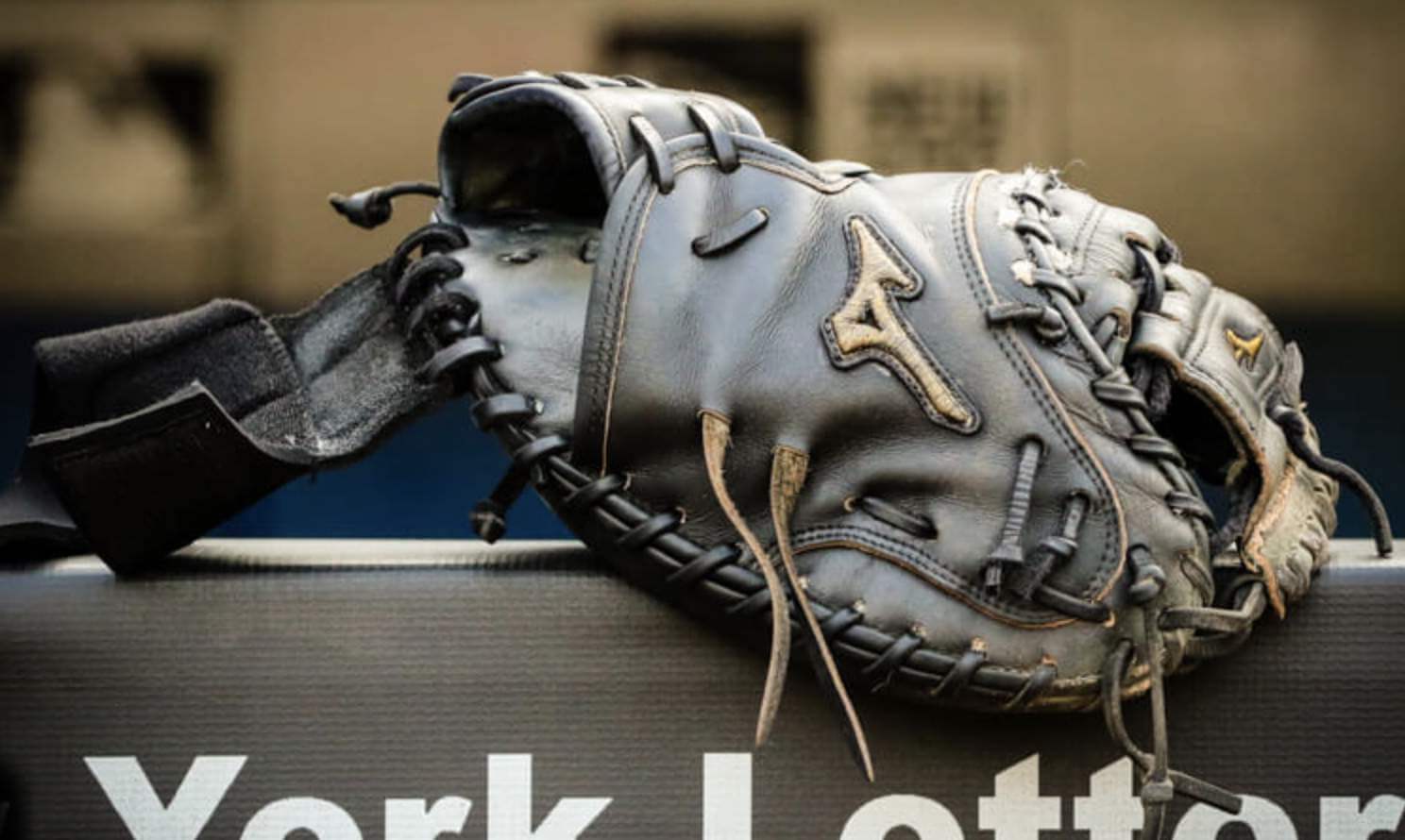 Interesting, right? I had no idea! The wristband attachment is apparently this product, or something like it. As the listing states, “It is meant to be laced into the base of your mitt/glove.”

I had no idea such a product existed, but I love it when I learn something new like this. It’s a good reminder that we can watch sports for years upon years and sometimes still not realize what we’re watching!

If any catchers or sporting goods mavens out there want to further enlighten us regarding this product, feel free to do so in today’s comments. Thanks!

(My thanks to Marlins communications VP Jason Latimer, whose assistance made this entry possible.) Meanwhile, over on the pitch: Interesting development yesterday in the world of soccer, as Ukraine unveiled its kits for the belated Euro 2020 tournament. The designs, one of which is shown above, all show an outline map of Ukraine, including Crimea — which was annexed by Russia in 2014. Russians are viewing the design as a deliberate provocation.

You can see more photos of all three kits here.

(Thanks to all who shared this one.) 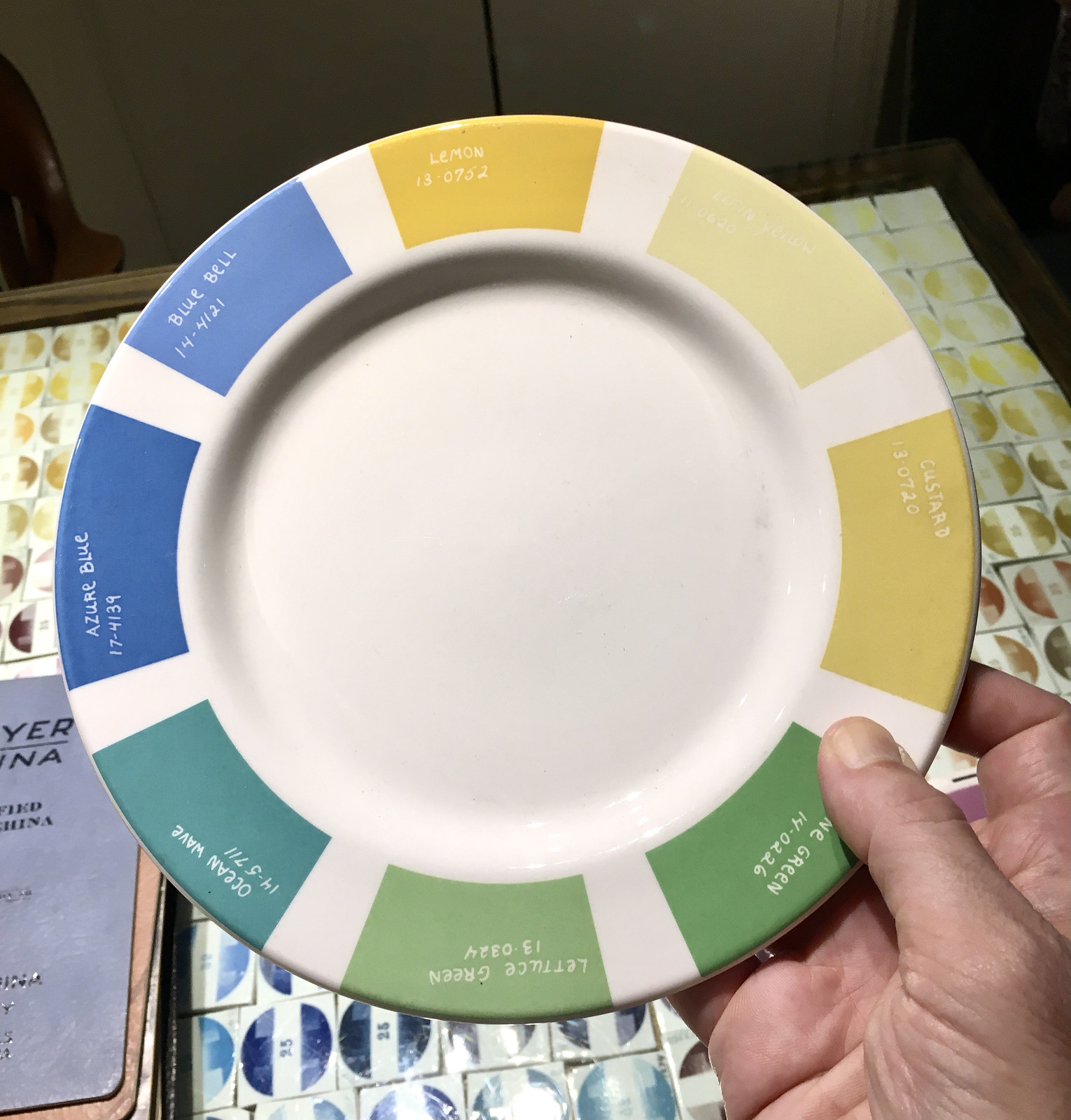 China syndrome: The photo above shows a vintage plate that functioned as a sort of sample catalog, showing the various colors offered by a dishware manufacturer. Isn’t it cool? It’s like a Pantone swatch guide for ceramics!

The plate is part of the personal collection of Julie Gaines, longtime owner of the NYC housewares shop Fishs Eddy. She has tons of old stuff like this in her office, which is upstairs from the retail shop. She recently decided to allow customers to come upstairs and see the collection (which she’s dubbed the Fishs Eddy Museum of Industrial China), so Mary and I stopped by on Saturday to take a look.

It was completely amazing, packed to the gills with vintage dishes, creamers, color samples, production ledgers, and more, all relating to fine (and sometimes not-so-fine) china. The space is cramped and the lighting isn’t ideal, so believe me when I say these photos don’t do justice to how incredible all this stuff is: 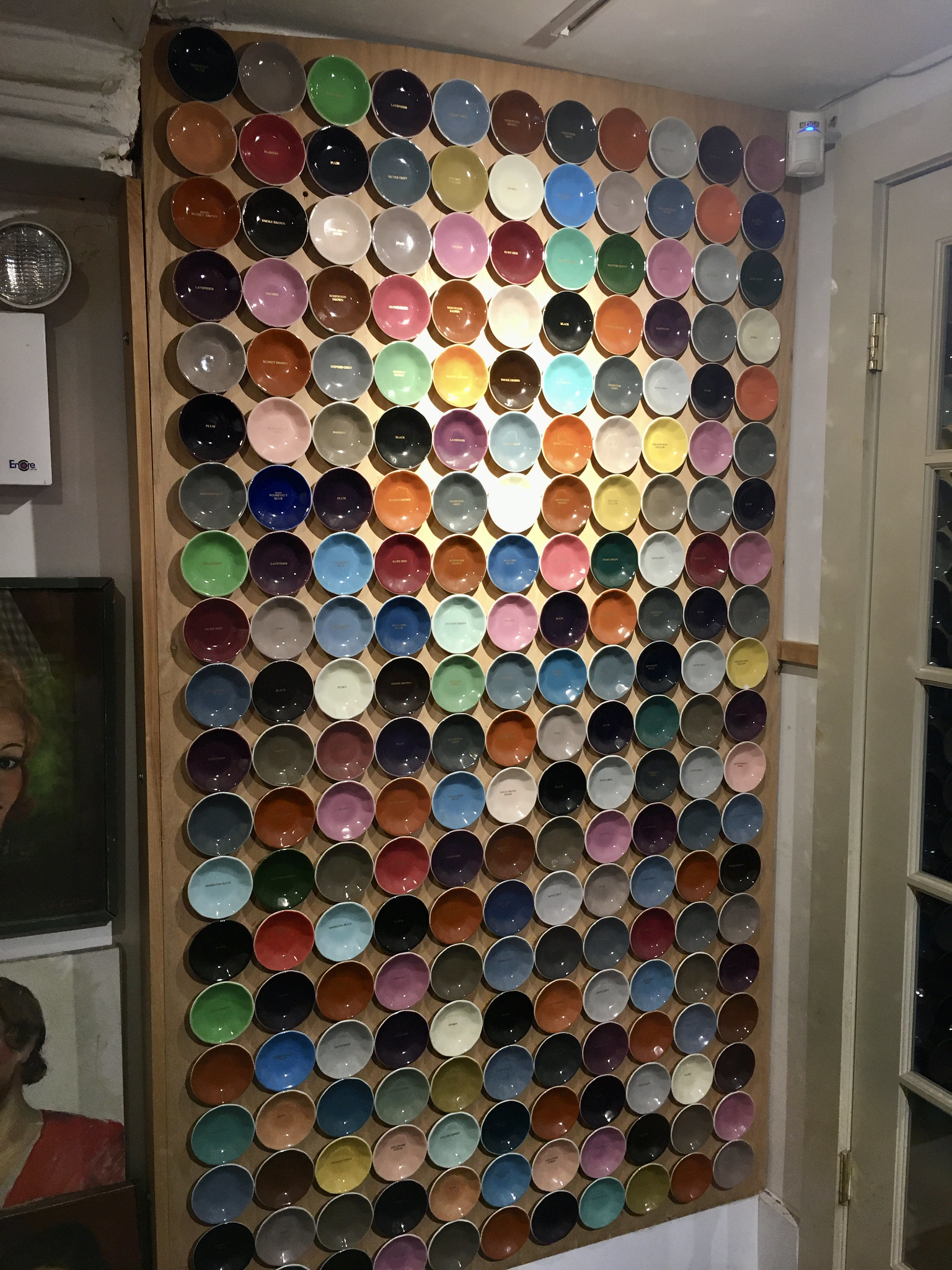 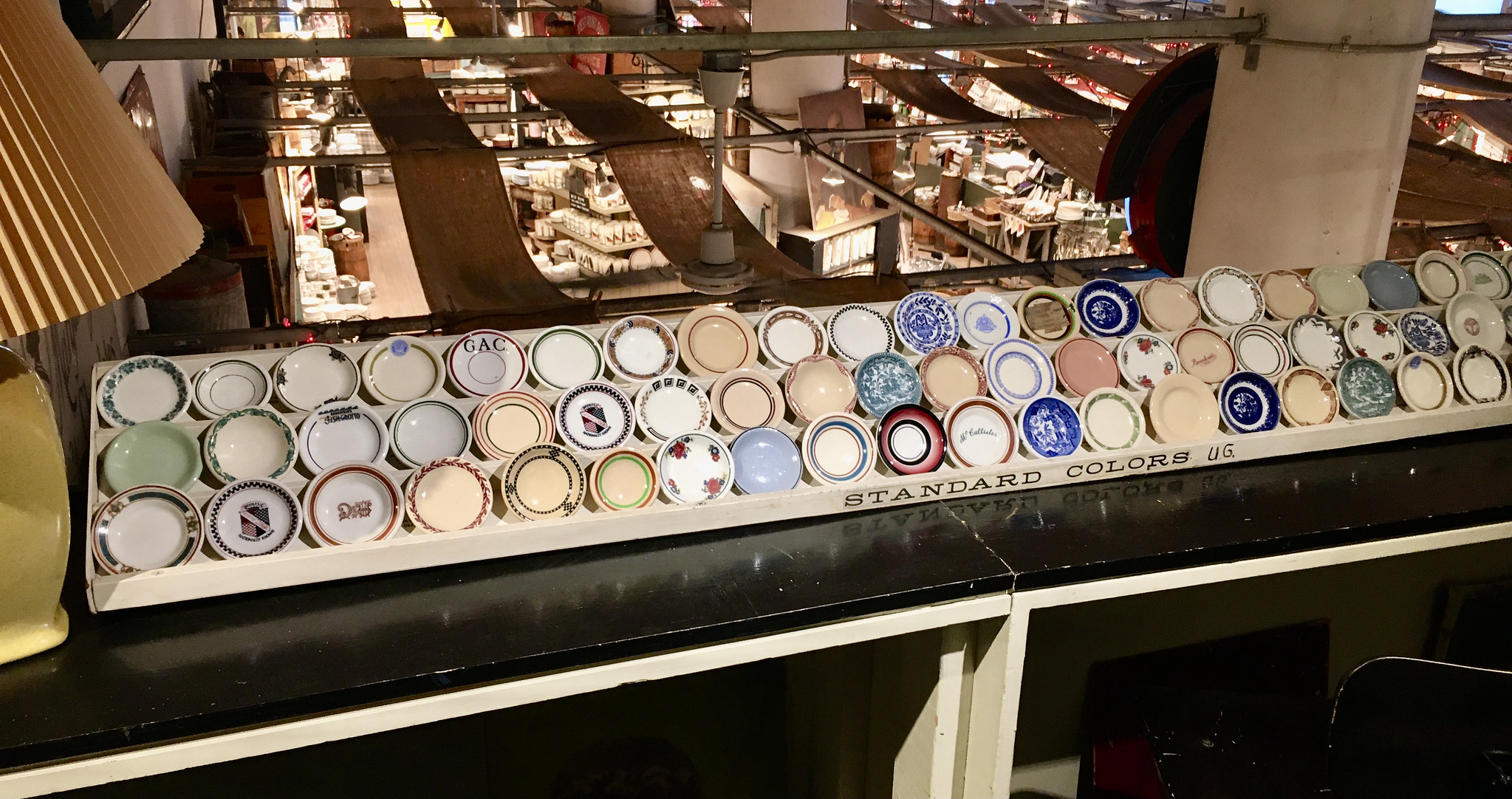 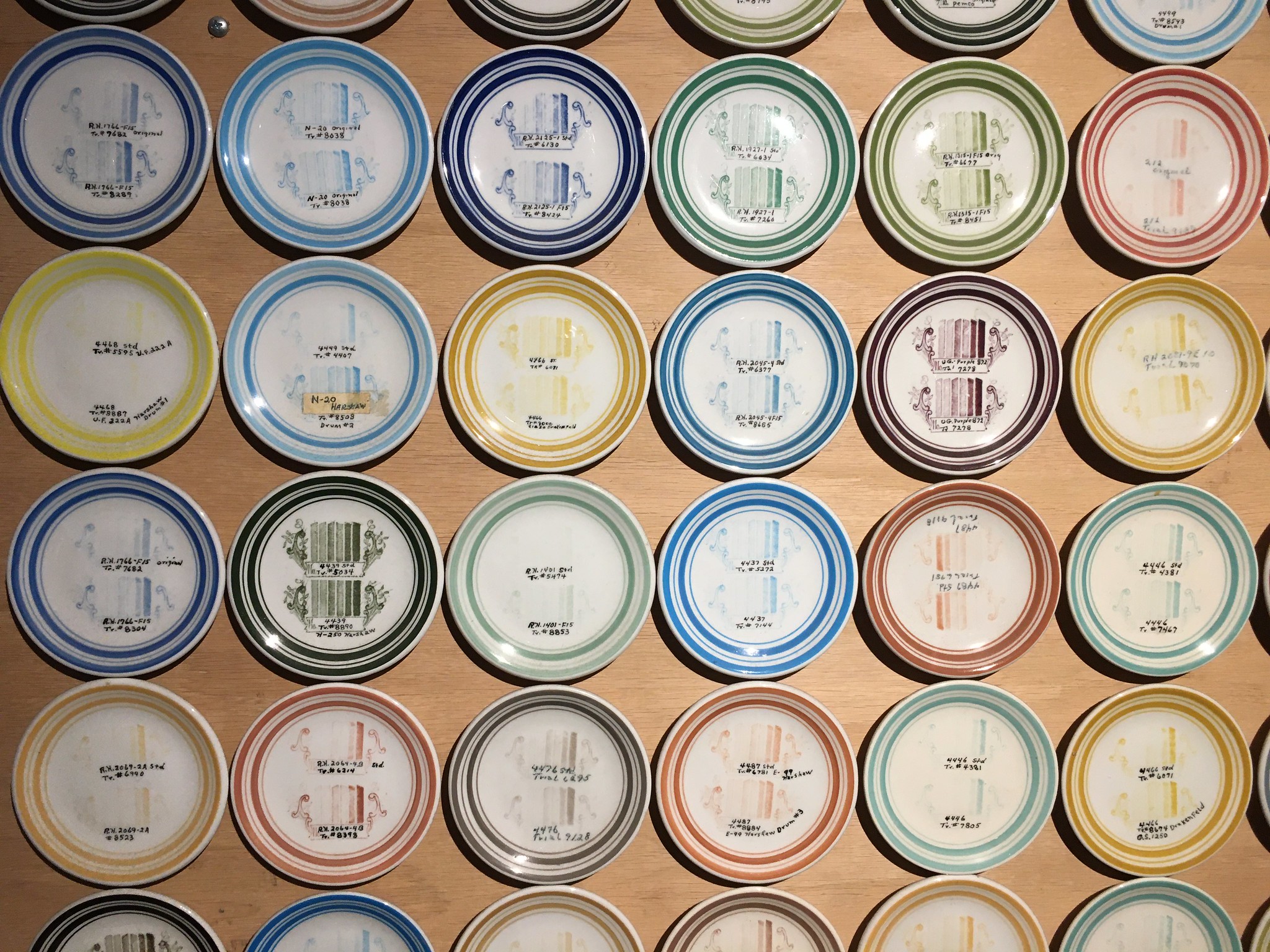 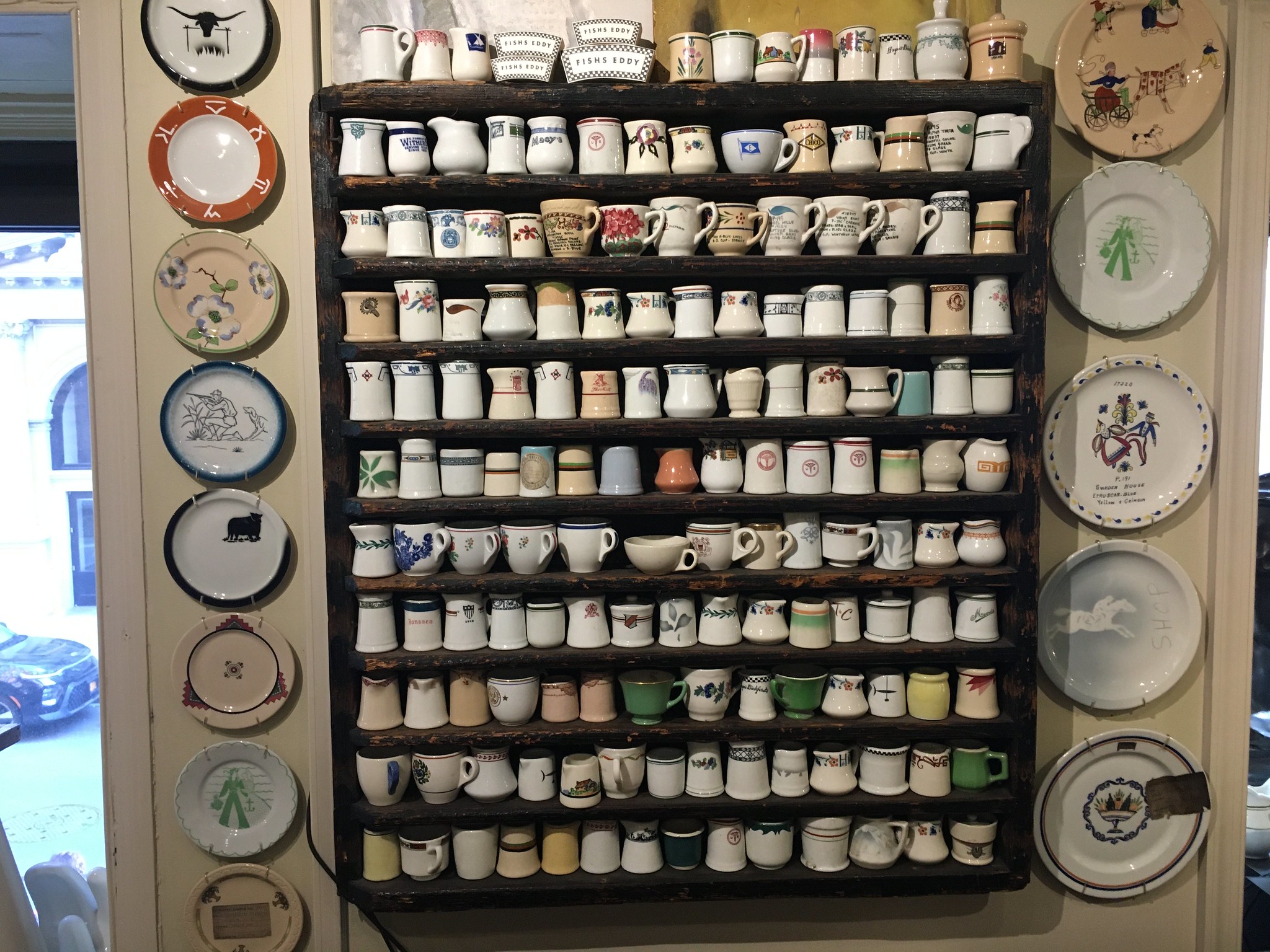 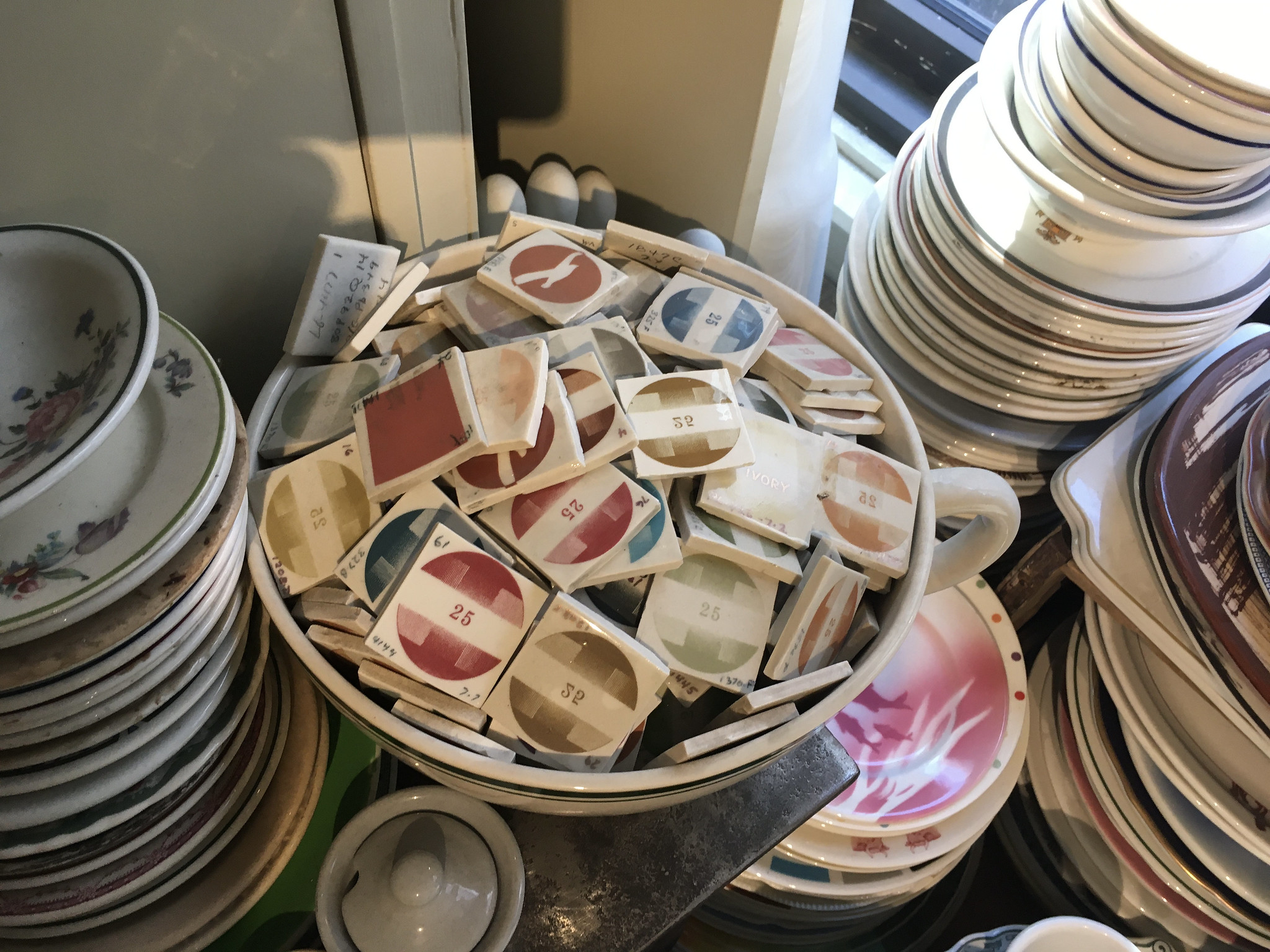 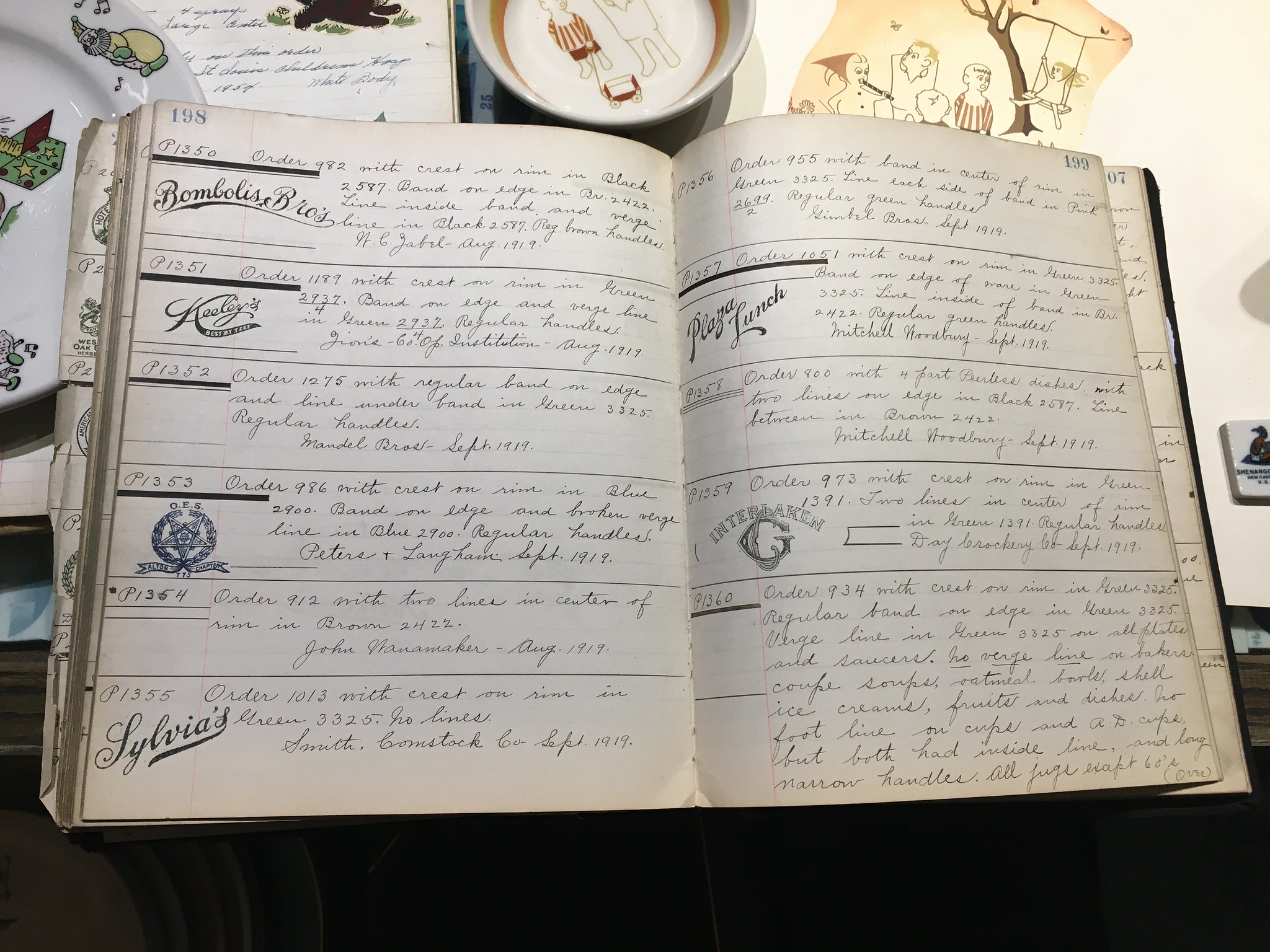 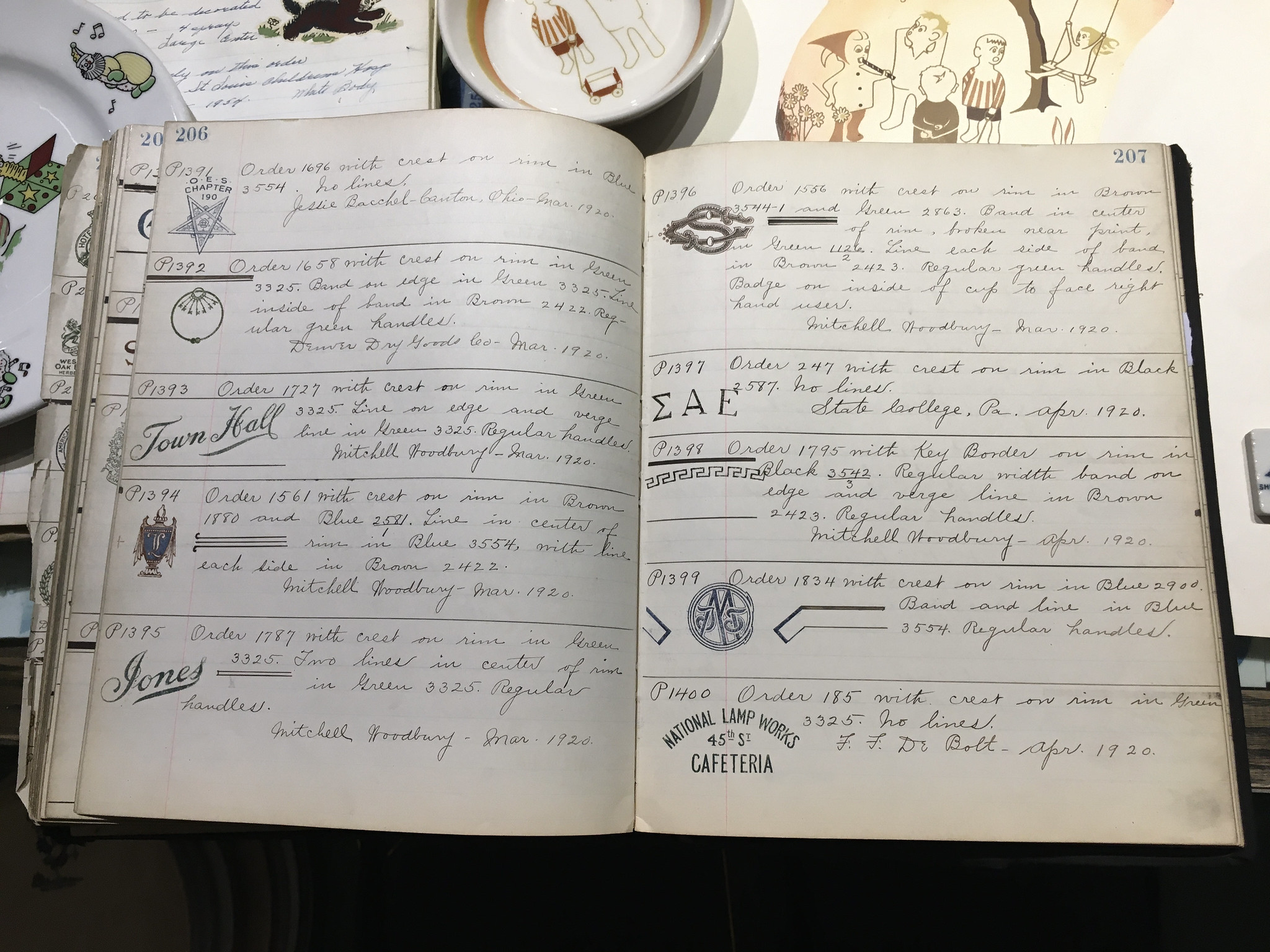 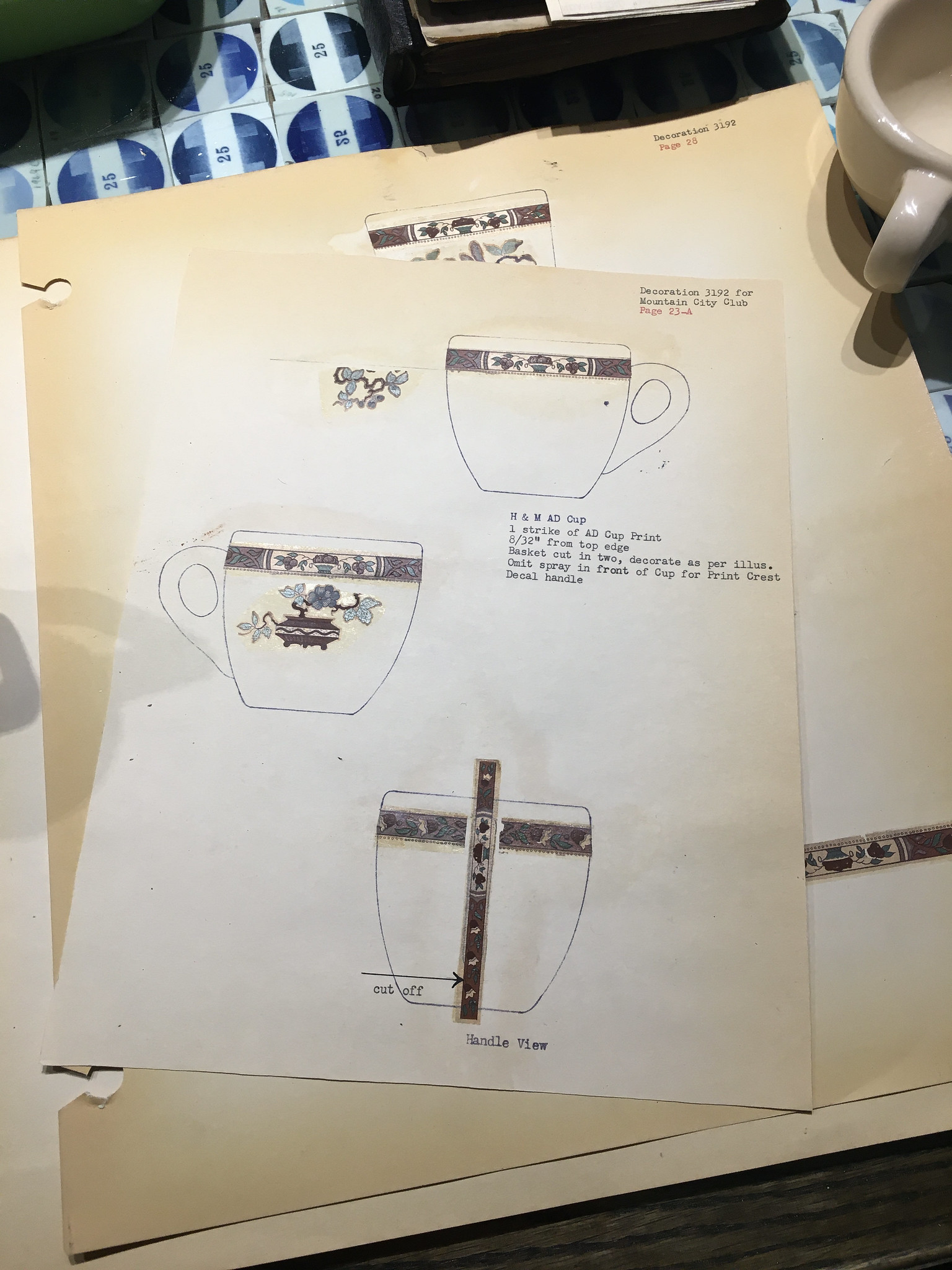 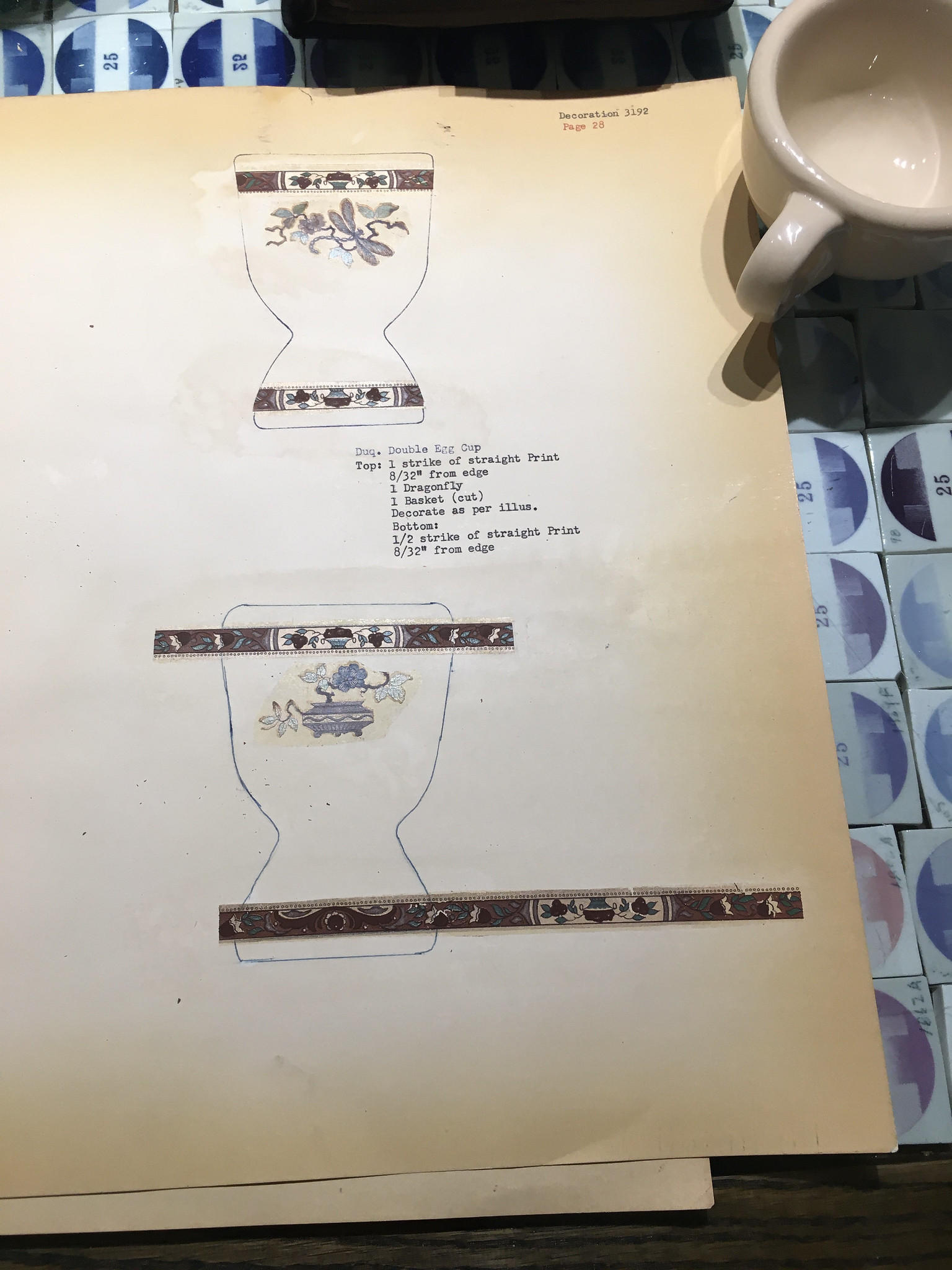 Design, collecting, catalogs, ledgers, samples — so many of my favorite things all bundled into one! The “museum” is available for tours on Thursdays and Fridays from 4-6pm, and Saturdays from 1-4pm. You can learn more about it here.

Sorry, no Ticker today, because birthday boy Jamie Rathjen had the day off. The Ticker will return tomorrow. — Paul

I just assumed that wristband held “the codes” to relay to the pitcher. Never imagined it’s also protective, but sure it makes sense!

I feel like a have failed the Uni-Watch community. I’ve known of Yadi Molina and Salvador Perez using the wriststrap glove for years. I just assumed it was pretty common knowledge.

I hang my head in shame, Paul. Ultimate dishonor on me.

Not at all, Sean — it’s *my* failing for not knowing about this accessory until now!

I used to wear a similar wrist guard catching in high school. It’s exactly what the Marlins say, helps protect the wrist when blocking balls. I never would have my glove dangle, but sure – I could’ve. This was back in the early 90s, so it’s not a new protect – just seems the Latin players may see Yadi use it, and he’s one of best ever; so why not – especially, if it helps keep you in the lineup

Was thinking about the wrist guard I wore as a youth catcher in the 90s. It wasn’t attached to the mitt, though. It was just a sweatband on the wrist with a plastic insert, like a soccer shinguard.

When I played catcher in the 70’s, we didn’t have things like that. We rubbed dirt on it and kept playing (sarc).

Fishs Eddy is a treasure and a NYC institution. Why hasn’t Taschen published the Fishs Eddy visual compendium we need? Julia authored a great graphic novel on running a small business – great insights.

I’d buy that. Those notebooks with the longhand entries had me drooling.

“Russians are viewing the design as a deliberate provocation.”

I feel like the Ukrainians might view the *annexation of Crimea* as a deliberate provocation. But what do I know?

Yep. Classic domestic-abuser gaslighting going on between nations in this instance. I didn’t have a second rooting interest in Group D after Holland, but now I’m all in for Ukraine due to the shameful Russian response to the Yellow and Blue’s uniform.

Hear, hear! Not to get too political but the Russian protestations about such things are well beyond tired and played out.

This wristband catcher contraption reminds me of when Steve Yeager after being seriously injured came up with something to protect his throat. MLB was quick to put base coaches in helmets after one was hit by a line drive. Why, if multiple catchers in your league are designing additional equipment protections, hasn’t MLB made them standard issue?

Maybe they are standard issue but they aren’t required and some (most?) catchers simply don’t wear them.

A couple of interesting uni looks in Denver yesterday:

Rockies in purple against the A’s in Kelly green.
link

From the CONCACAF match last night, Mexico in black and pink.
link

Maybe my monitor is off, but that doesn’t look “pink” to me. More of a burgundy or cranberry?

IT’s pink. Based apparently on a textile pattern that used pink thread. I think the black base color made it look more cranberry on video than the shirts are up close.

Mexico has such a tradition of good-looking green jerseys they could have worn against the USA’s white that it just seems a shame to see them wear these. Fine third jerseys, but only when they can’t avoid clashing the green. And, I mean, the Mexican MNT’s nickname comes from their distinctive greed, red, and white colors, so seeing them play in a championship final wearing none of their three signature colors was just off-putting to me.

Thanks Scotty. Even in that link I wouldn’t *really* call that color pink (more fuchsia, me thinks), but it definitely looks pinker than the other referenced photo.

Never heard of the color “greed” before, but ok ;)

Watching the match last night, my first reaction was “I thought the US were playing Mexico” Second reaction was “why is the US wearing black and pink. Is this another Neon Yellow fiasco from Nike?” When I finally got a zoomed in view of both teams I thought “USA looks great. Why is Mexico not wearing their White/Green/Red colors?”

From one of the soccer websites: “Adidas combines the black main color of the new Mexico home shirt with pink (‘real magenta’) and white.” Why? Because apparently adidas and those who buy national soccer kits like the BFBS stuff for Mexico.

I was a catcher through college and I had teammates that used the leather laced in protection on the glove. I never used one but I wasn’t opposed – just didn’t know where to get one in the early 2000s. I do remember seeing a teammate of mine wear one way back in little league in the mid-90s as well.

Wow, thanks for the great article and photos on Fishs Eddy “Museum of Industrial China”! I love baseball and hockey, but also dishes. Especially egg cups, so it’s really amazing that you have a photo of the design specifications for one. I never thought I’d see egg cup drawings in Uni-Watch. What more could I ask for? Yes, having three gorgeous photos of Yadier Molina! Thank you for adding some excitement to my Monday morning.

You’re very welcome, Vernona! Always great to hear from you and Elena here on Uni Watch!!

At first I thought it was like a tool tether, with a strap, but this is different.

I assume it’s been covered here at some point before, but I hadn’t noticed until yesterday that Vanderbilt has taken their military cosplay nonsense to another level.

It’s been decades, but I remember that my catching mit from Little League actually had a leather strap sewn (stitched?) directly to the bottom of the mit that came down and covered my wrist.

As a Fiestaware collector, that Museum of Industrial China was fun to see. I wish I could get to NYC to check it out.

My first glance at the lead image today, I thought the piping on Sandy León’s pants was the strap.

My 13u catcher uses a wrist strap on his mitt.