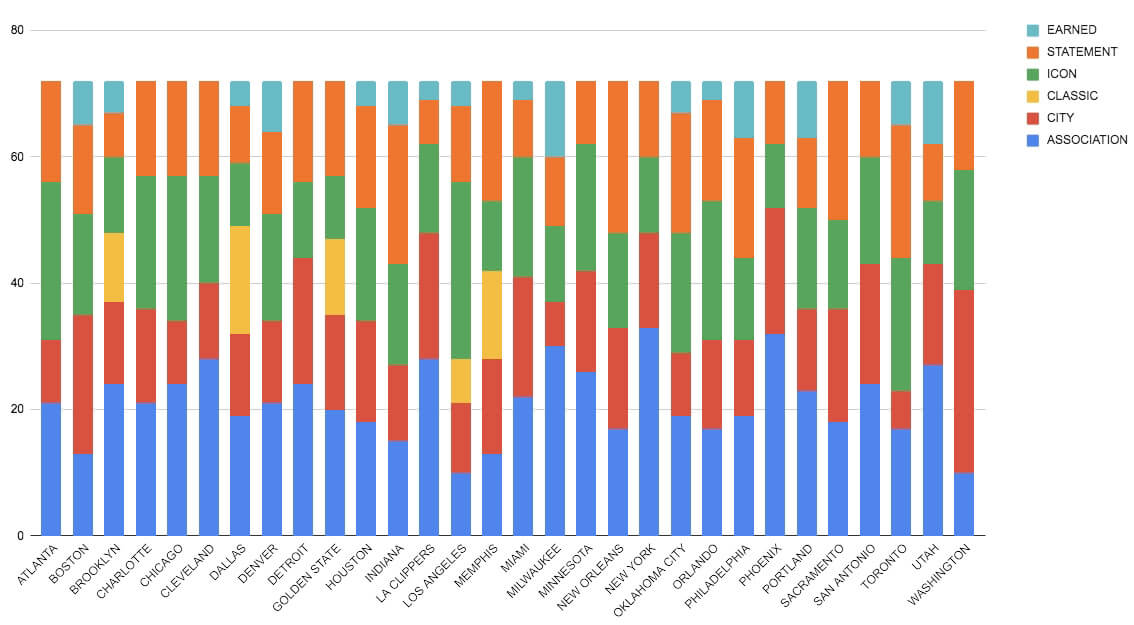 The bar graph above shows how often each NBA team wore each of its uniforms during the 2020-21 regular season (all data from LockerVision). I used that breakdown as the basis for a new set of NBA uni rankings. Instead of ranking each team’s full uni set, I decided to do rankings based on the most-worn uni for each team, which brought some interesting trends and info to light. You can check it out here.

(Super-duper thanks to the anonymous data-cruncher and -visualizer who created this bar graph for me. He knows who he is!)

Meanwhile, speaking of NBA leaks: Igor Coelho, the Brazilian leaker who I interviewed six months ago, says this was slated to be the Kings’ Earned design, but the team didn’t make the playoffs last year: 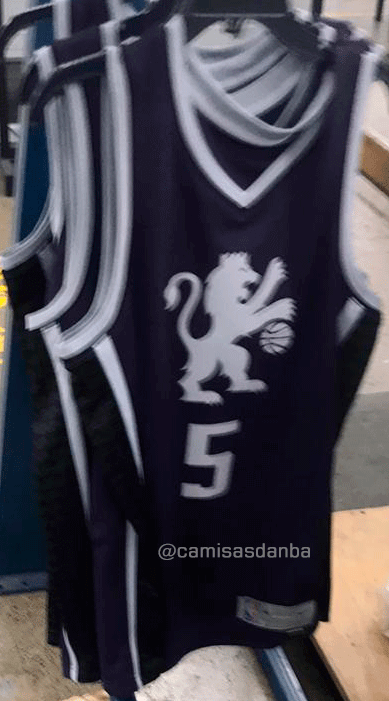 So this is a phantom design — at least for now. Maybe they’ll eventually use it (assuming the Kings ever make the postseason again).

(My thanks to @NBAunitracker, who was the first to bring the new leaks to my attention.) 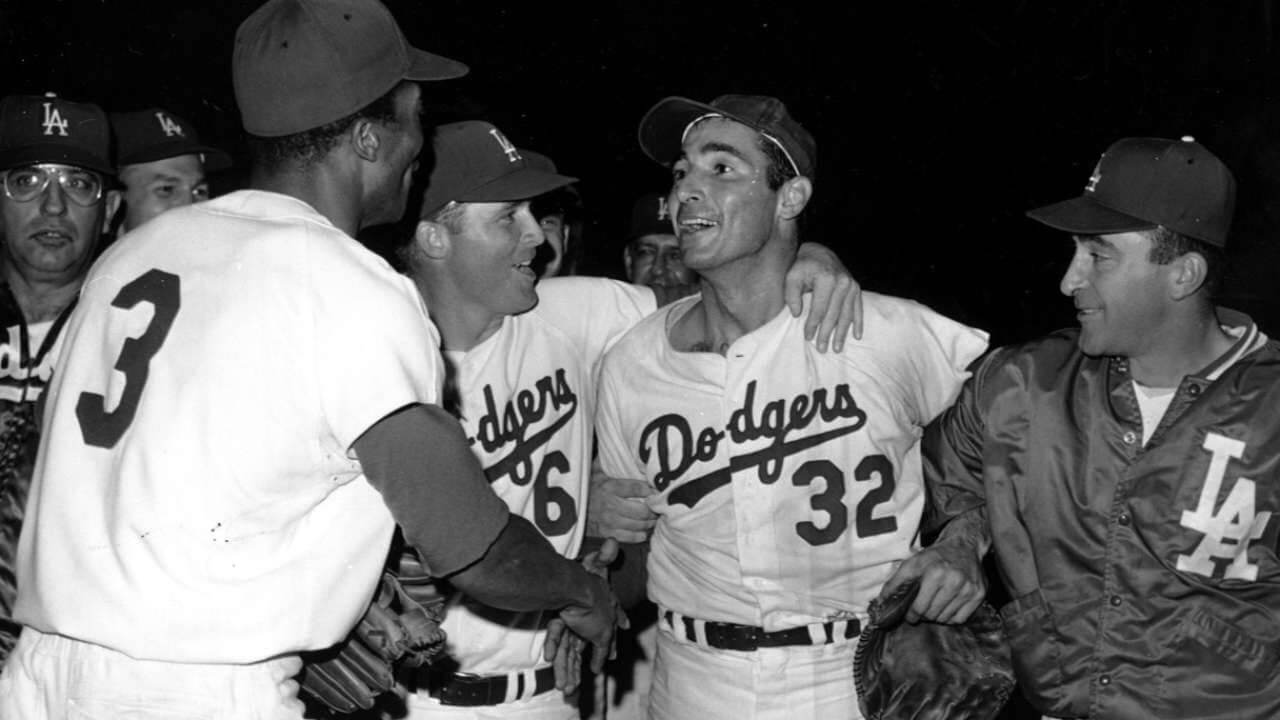 Too good for the Ticker: The photo above shows Dodgers pitcher Sandy Koufax being mobbed by his teammates after throwing a perfect game on Sept. 9, 1965. Check out the jacket logo on third baseman Don LeJohn, at far right — never seen that version of the Dodgers’ “LA” mark before!

I ran this one by Dodgers design director Ross Yoshida. “I have seen that logo in photos, but only on jackets,” he said. “We have never replicated it nor used it on anything.”

(My thanks to Dean Ollins for spotting this one and bringing it to our attention.) 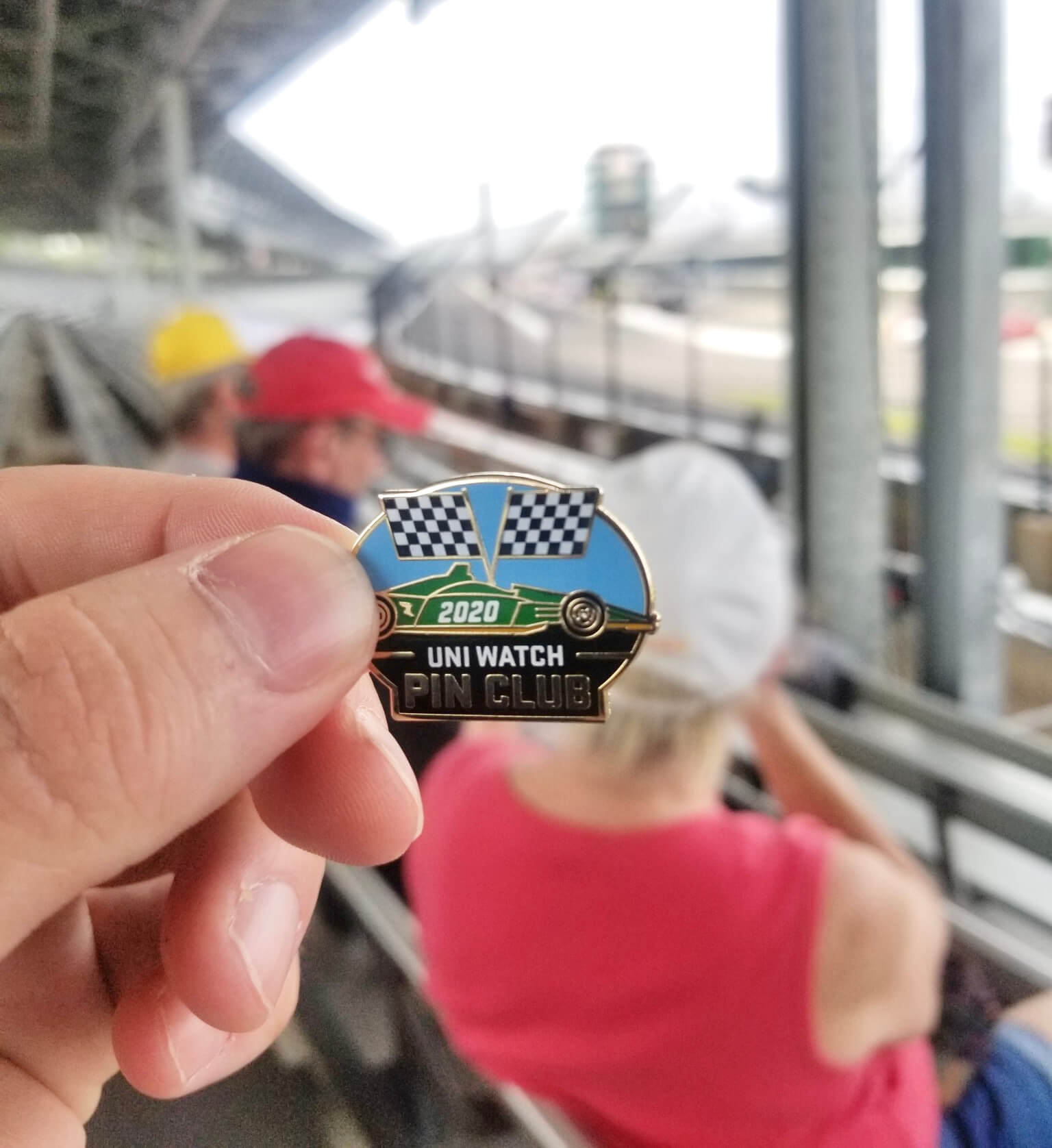 Finally: When Todd Radom and I were plotting out the designs for the Uni Watch Pin Club last year, we decided to go with an Indy car theme for May. That pin went into production before we realized that the Indy 500 would be postponed due to the pandemic.

A year later, reader Sam Myers finally got to wear the pin to the Indianapolis Motor Speedway. Very cool! Thanks for sharing, Sam.

Baseball News: Pirates P Wil Crowe wore the wrong cap last night. … Nats 1B Kyle Schwarber was still wearing last weekend’s camo gloves during last night’s game against the Cubs. All other Nats players were in red or grey (from @artofscorebug). … Rays P Ryan Thompson, who wears No. 81, and Giants P Tyler Rogers, who wears No. 71, talked to Fangraphs about why they picked somewhat odd uni numbers (from Tyler Obalek). … Two Phillies fans, one wearing a Bryce Harper jersey and another in a Cliff Lee jersey, made an unwitting nod to one of the 20th century’s greatest writers (from Noah Kastroll and Armen Saryan). … Longwood and Charleston Southern both wore navy jerseys with white pants during their game last night. That has to be some sort of violation, right? (from Richard Martin).

Hockey News: The new Iowa ECHL franchise has revealed its name — the Heartlanders — and some pretty nice logos. Not often you see flowers as part of a team’s identity, and I think it’s perfect (from multiple readers).

Soccer News: The NWSL’s Kansas City team still has no official name or logo, but now it does have at least one official kit (from our own Jamie Rathjen). … A new Spurs third kit has leaked (from Kary Klismet). … Also from Kary: The Japanese men’s national team has unveiled a beautifully simple 100th-anniversary kit (also from Gabriel Hurl). … One more from Kary: Brazil’s São Paulo F.C. have new away kits. … MLS is bringing back their “Primeblue” promotion for next weekend, giving every team a templated blue jersey. And by templated, I mean we’ve seen these before: Greek team Olympiacos and the Cape Verde national team have worn identical designs (from multiple readers). … USL League One’s Richmond Kickers have a new third kit that’ll see the pitch this weekend.

Grab Bag: The comic Rhea Butcher spent a half-hour talking about mascots on an episode of the podcast Make My Day (from Max Weintraub). … An artist is accusing Aussie rules side Port Adelaide FC of stealing their new indigenous guernsey design from her painting. The details in the guernsey and the painting are indeed identical. This isn’t the first time Port Adelaide have been accused of cribbing from designers (from Ash Norris). … Update: Port Adelaide has now confirmed that the design was plagiarized, but the original artist has given them her blessing to wear the design. … Ahead of the biggest race on the F1 calendar in Monaco, several drivers have unveiled special helmet designs (from Kary Klismet). … Also from Kary: Track and field athletes at the University of Vermont blacked out the school’s name on their uniforms during the New England championships last weekend to protest the administration’s handling of a series of sexual misconduct cases on campus (also from Timmy Donahue).

Regarding the baseball ticker item about the two Phillies fans, Cliff Lee wore number 34 and 33 with the Phils during his two stints with the team. The fan wearing 16 is throwing it way back to Travis Lee, who played for the team in 2001-2002.

That is the catch of the day!

Schwarber has 3 HRs and 6 RBI since last Friday, must feel good in them

I think it’s Don LeJohn, not John (which would be a cool name, though).

InsideHook piece is now up:
link

Shoutout to whoever writes the captions on the InsideHook article.

“The results are in, and you are not The North”
“Which side are you really on, Philly?”
“We were promised a pelican”

Shoutout to whoever writes the captions on the InsideHook article.

“The results are in, and you are not The North”
“Which side are you really on, Philly?”
“We were promised a pelican”

Those Japanese men’s national team jerseys are almost perfect! The maker’s mark is (uncharacteristically) understated, no other advertising, plus collar and cuffs! Well done.

YES my eyes bugged out. Gorgeous. And it really speaks to how good a jersey can look without all the smeared advertising all over it. That collar is downright DREAMY.

Thanks, great write-up, as usual.

(Sorry, should’ve looked at above comments as it’s already noted)

Celts only have 70 games of unis and hornets only 68.

Anyway thanks for a great article as always! Sorry if am missing something just a little ocd

Bonus points for the Bucks not having a uni advertiser patch…

until it was announced today. (Motorola)

I’ve always hoped the Bucks would go back to wearing forest green with lime green trim again. Those uniforms were great.

Think we could get that considering the number of uniforms? No. The Bucks instead wearing some type of blue uniform with waves.

Then we did get forest green uniforms with lime green trim but worn by the wrong team (Celtics)!

Man, the NBA uniform situation is a mess.

I see that Sacramento Kings jersey, and I get a sudden craving for a Lowenbrau.

As a Suns fan, I find it interesting that you like the previous set of Suns uniforms so much. That uniform set was mostly panned by Suns fans.
The fake sunburst wasn’t well received – if they were going to have the sunburst on the jerseys they should have fully done it and put the basketball in the sun at the end as they did in the 90’s.
Also, the fact that the Phoenix Suns actually had a home uniform with zero trace of purple really rubbed long time fans the wrong way. The black and orange looked like a bad Halloween costume, rather than a Phoenix Suns uniform (Although I suspect that is why you liked it so much, Mr. Lukas).

I *loved* the sunburst outline. (And yes, the lack of purple didn’t hurt.)

The 76er’s “PHILA” uniforms don’t look bad, but I do have the complaint that I don’t think “Phila” is a good abbreviation for the city since to my knowledge it’s never pronounced verbally. I assume it would be spoken as “Fill-a” but who says that instead of “Philly”? Shouldn’t that be what’s on the jersey?

When did the public begin to accept that uniform stripes and trim that should (and could) connect, instead, just arbitrarily stop? Manning being good on the Colts?

While I agree with the post thr Pirates two “unnecessary” alt hats with the thin yellow or white trims, and am generally against all. the ‘honor the military ” camo jobs, the Bucs current Wednesday alt actually works for me. Probsbly better than else in this genre I’ve seen. There is no csmo on the unis, just dark olive letters snd numbers nd the blsck camo on the hat wit the olive visor is barely visible. I actually like the combo. In last year’s a”summer camp,” they seemed to alternate these caps with the spring training caps.

While I agree with the post thr Pirates two “unnecessary” alt hats with the thin yellow or white trims, and am generally against all. the ‘honor the military ” camo jobs, the Bucs current Wednesday alt actually works for me. Probsbly better than else in this genre I’ve seen. There is no csmo on the unis, just dark olive letters snd numbers nd the blsck camo on the hat wit the olive visor is barely visible. I actually like the combo. In last year’s a”summer camp,” they seemed to alternate these caps with the spring training caps.

It’s a shame the Heat’s Earned uniform was the least worn; it’s by far my favorite. I really want a black+yellow NBA team!

For ones much older with the flower primary crest there is the Portland Rosebuds of the PCHA and WHL.
link