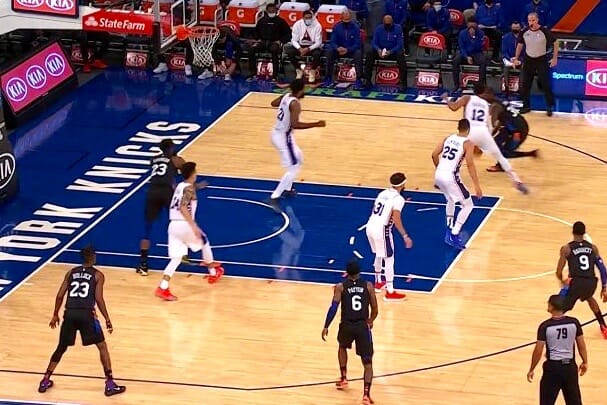 Paul here, making a rare Sunday appearance. Phil has the day off and we weren’t planning on having a post today, but something happened last night that was just too good to pass up, so here I am.

So: As you can see above, the Knicks (they’re the team in black, wearing those godawful City alternates) had two different players wearing No. 23 at the beginning of last night’s game against the 76ers. Those two players were center Mitchell Robinson (whose regular uni number is indeed 23) and forward Reggie Bullock (who’s supposed to wear No. 25).

Did Bullock accidentally grab one of Robinson’s jerseys? Nope — they both had their proper NOBs, as you can see in this next shot (click to enlarge): 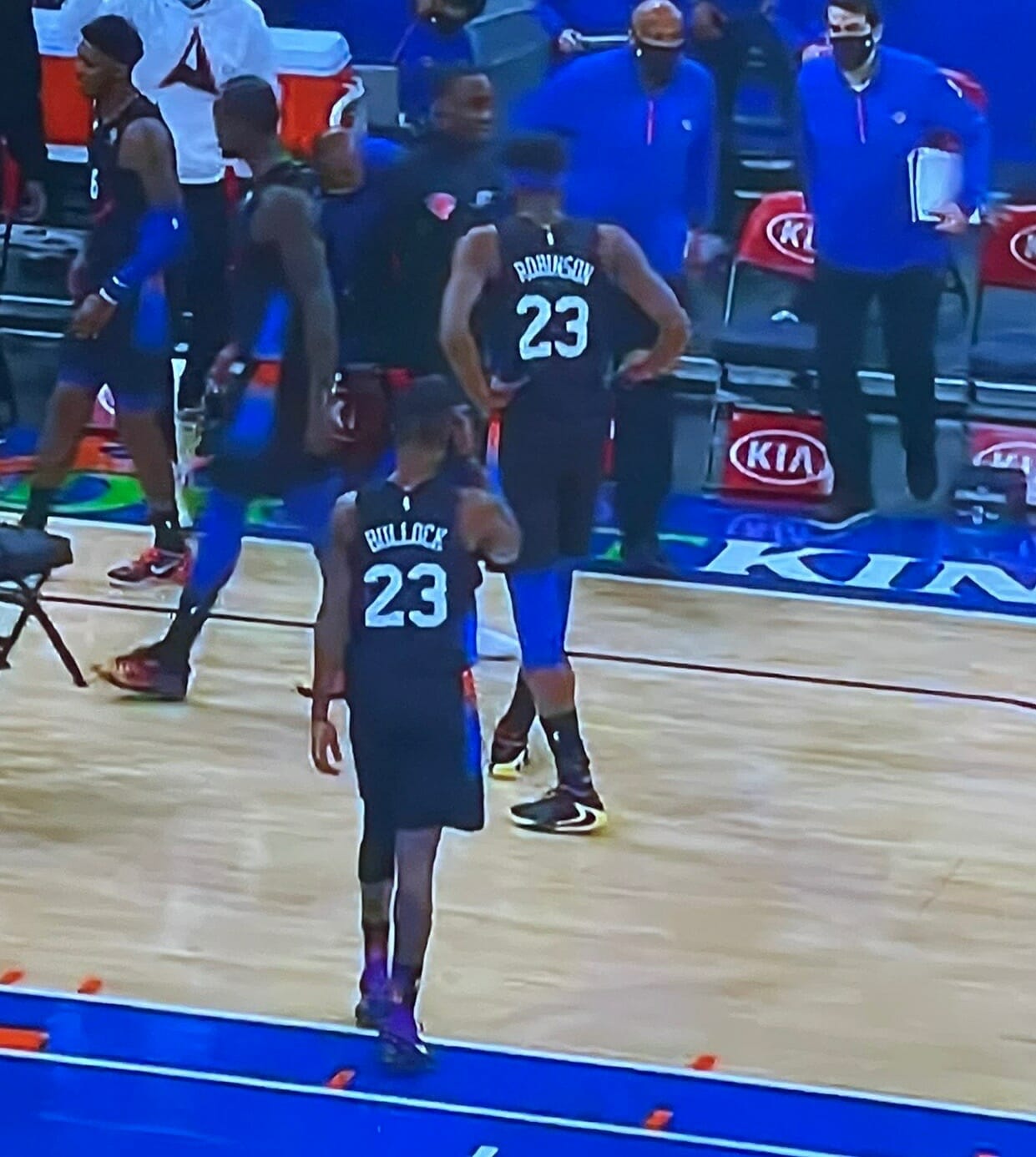 The beauty part is that Bullock had No. 25 — his proper number — on the front of his jersey. So he looked fine from the front but wrong from the back. Uni-aware fans noticed it a lot sooner than the officials did (I got so many emails and tweets), but eventually the game was stopped and Bullock had to change his jersey:

The Knicks’ Reggie Bullock had No. 25 on the front of his jersey but No. 23 on the back.

Both he and the ref had to laugh 😅 pic.twitter.com/RABuhsv9TX

Multiple choice — this is:

(a) The most Knicks thing ever.

(b) The most City Edition thing ever.

(c) A very nice gift to the uni-verse, in the spirit of the holiday weekend.

(d) Only the third- or fourth-most problematic thing about these uniforms.

(e) A great relief to Mets fans like myself who can feel safe knowing that the Mets, for all their foibles, will never be the most incompetent franchise in town as long as James Dolan continues to own the Knicks.

That’s it for today. See you back here tomorrow for Monday Morning Uni Watch! — Paul

So I’m desperate to know – do they keep a seamstress on retainer? Have spares? Run to the gift shop?

No seamstress. I’d imagine those are heat-applied numbers.

Although I agree with “all of the above”, C is the answer that impacted me the most. I wasn’t even going to check in today, but I guess I did so out of hope and habit. I can’t go a day without this place.

Is that a technical foul? I think it is in college, but I don’t know about the NBA, and in any case it seems like the refs let it go.

They should auction off the 23/25 jersey for charity.

I love the low key ridicule of the “city editions” concept by the announcers.

Remember when the “city” uniforms where just simply the “road” or “away” uniforms. Also not that it matters but isn’t the phrase, “The city that never sleeps.” Seems odd to me to be missing the word the and that. Anyways, may answer is (F).

Definitely (f) – all of the above.

Although I’d like to add that James Dolan also owns the NHL’s Rangers but for whatever reason mostly stays out of their business. They may not have won a championship since 1994, but at least they’re not a complete laughingstock like the Knickerbockers (last title: 1973).

I may have been one of the first tweets, as I heard this live on the radio and quickly made a screenshot as Batbeat.

Clyde Frazier was asked about the uni and said “I have thrown away better.” I agree. Clyde wore the perfect uniform with the Knicks. It shall never return.

Will you be able to buy one at the NBA shop or will the league/team try to prevent it?

I like the idea of selling the real one for charity, because you know someone out there will pay for a “rare” item like that. But I’m sure proper Knicks protocol will be to destroy it, deny it ever existed and take away the tickets of anyone who asks what happened to it.

The fact that you had to clarify which team was the Knicks is why I vote (D).

E. Last time I saw something like that was in 2000, when David Regis wore No. 6 on the front and No. 9 on the back for the U.S. men’s national team soccer team against Barbados in a game played at Foxboro.

The Spanish-language announcers were incredulous. “You mean to tell me that the most technologically advanced country in the world cannot get a soccer uniform right?”

Ha, ha! Thanks for a great laugh. Much the way you as a Met fan like to have the Knicks around, so do we in Michigan who are Lions fans.

Thats hilarious. Also once all 32 city edition uniforms are worn, could you do that shoot or shite thing again like last year? I have also started a project of redesigning the entire nba each team getting five jerseys