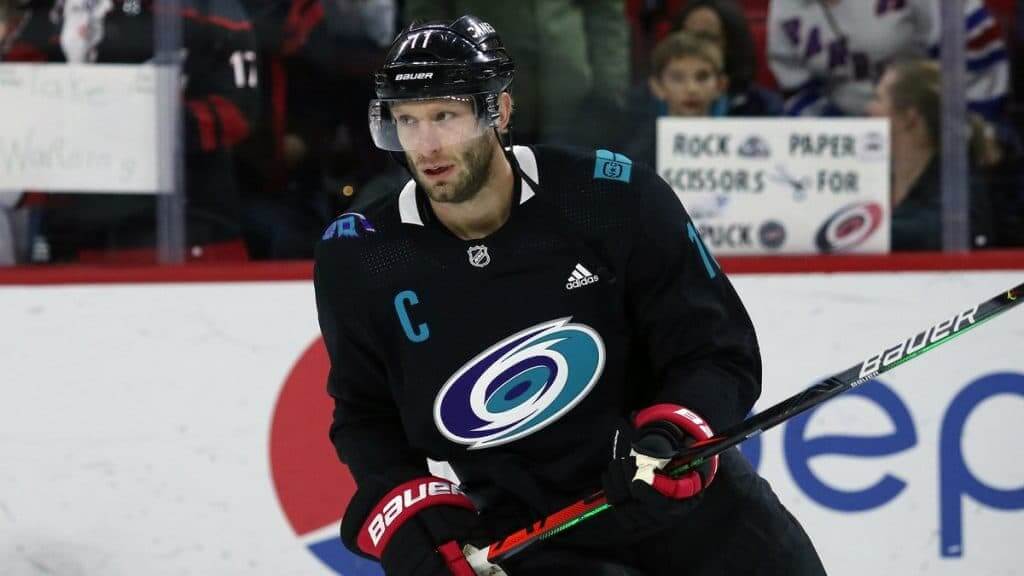 Paul here, making a rare weekend appearance while Phil takes the weekend off so he can participate in a curling tournament. (Hope you win, buddy!)

So: Cross-sport uni promotions are getting more and more common. The latest example took place last night in Raleigh, as the Carolina Hurricanes held a Hornets Night promotion, complete with Hornets-colored jerseys for pregame activities. Here’s how they looked as the team came onto the ice: 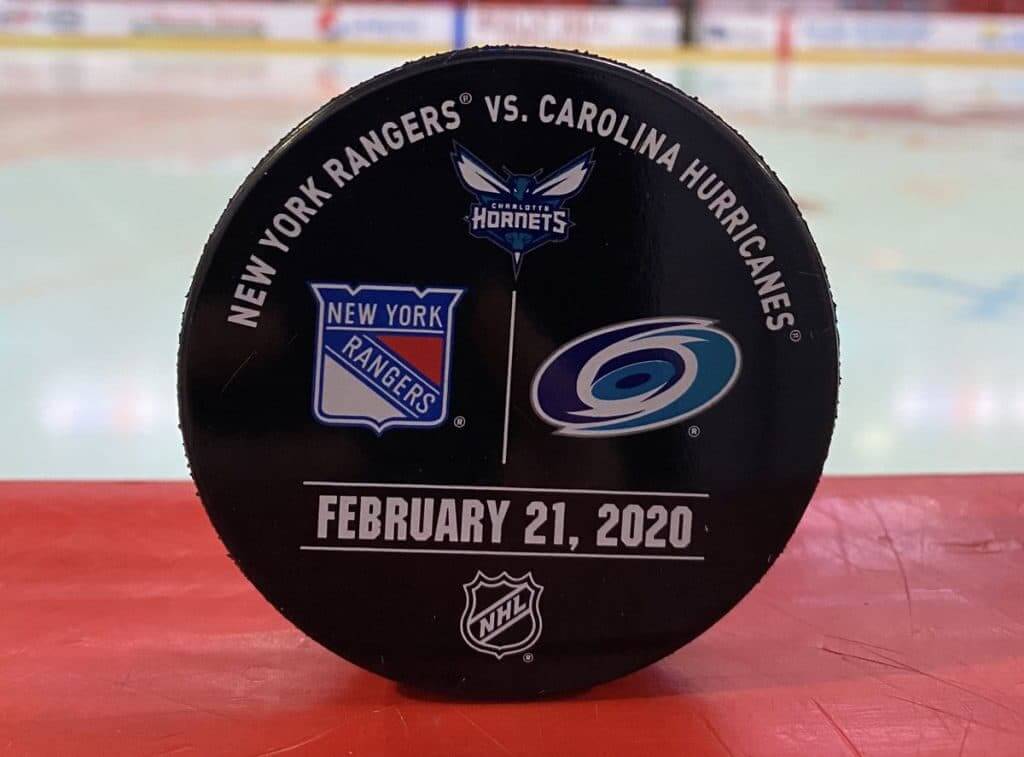 The ’Canes also imagined how it might look if the Hornets returned the favor: 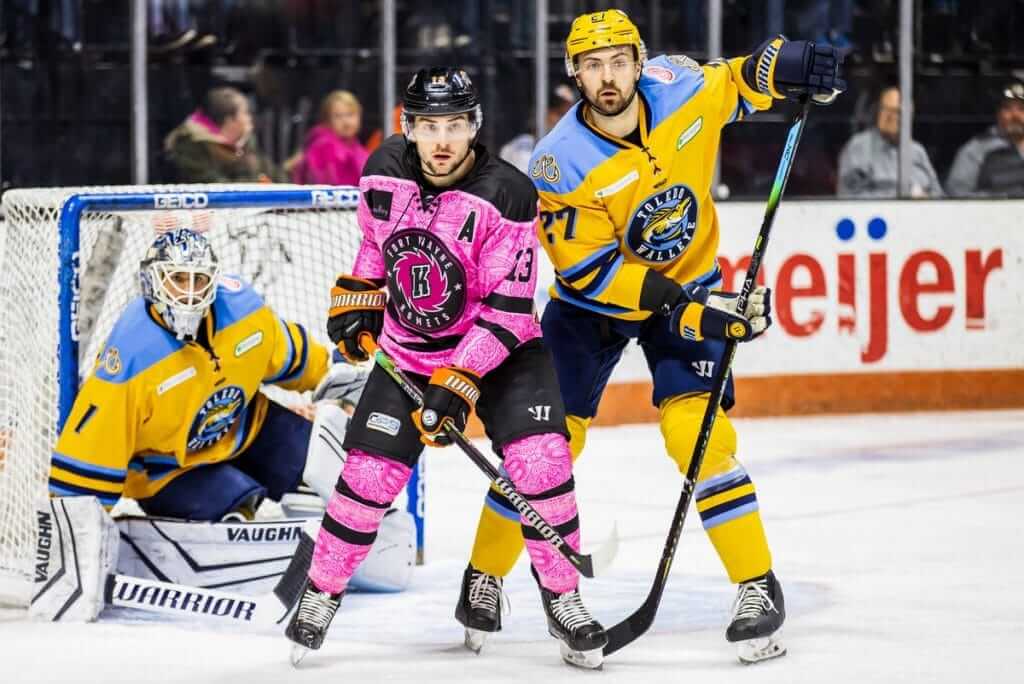 Get out the sunglasses: There’s color vs. color, and then there’s really color vs. color. That was the situation last night in the ECHL, as the Fort Wayne Komets wore pink while hosting the yellow-clad Toledo Walleye. Yikes!

Here’s how it looked in action:

.@jwkhockey6 gets behind the Fort Wayne defense, but his breakaway attempt is turned aside.#GoWalleye pic.twitter.com/jbtdxOiomj

.@jwkhockey6 breaks the scoreless tie 5:05 into the second period! #GoWalleye

And if you think that was bright, check out what the Oregon and Cal women’s basketball teams were wearing last night: 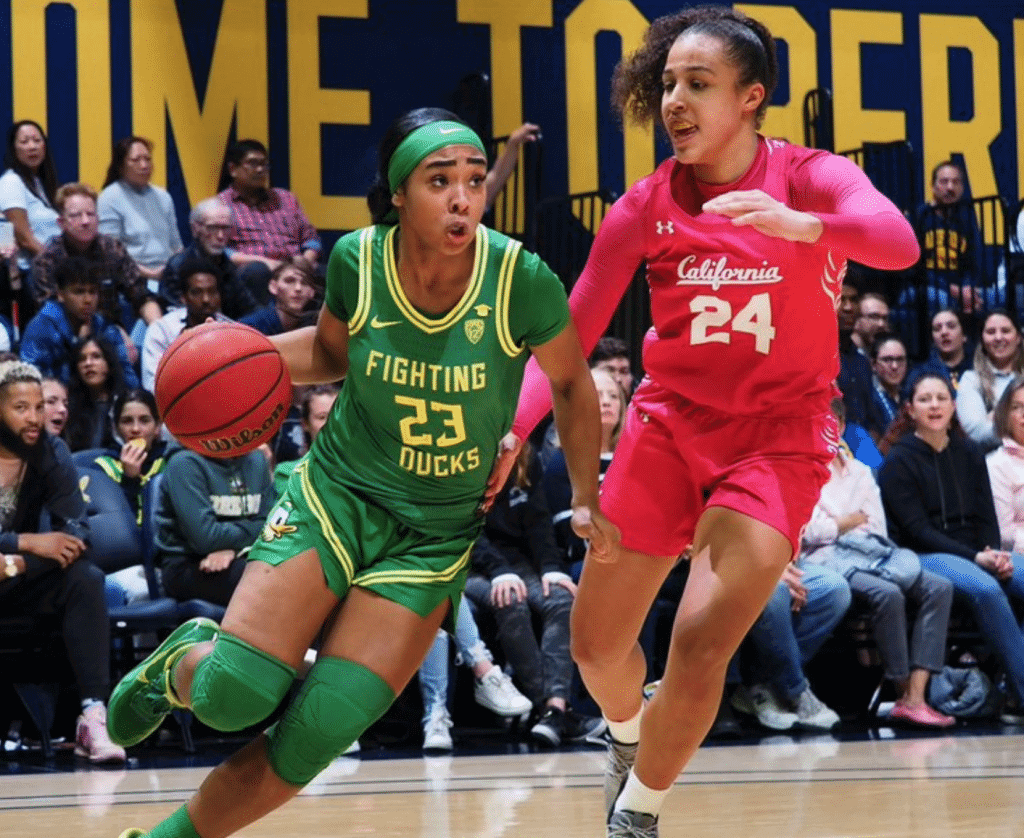 Okay, this is getting out of hand…@ErinnSB21 is now 8-of-9 from deep for 24 points, and we're less than three minutes into the third… 😱🔥#GoDucks | @Pac12Network pic.twitter.com/IA4KtcQzfJ

Ducks lead 23-17 with under a minute to go in the first. #GoDucks | @Pac12Network pic.twitter.com/3Lpb1GYtWh

I don’t know about you, but I’ll be glad when Pinkuary is over! 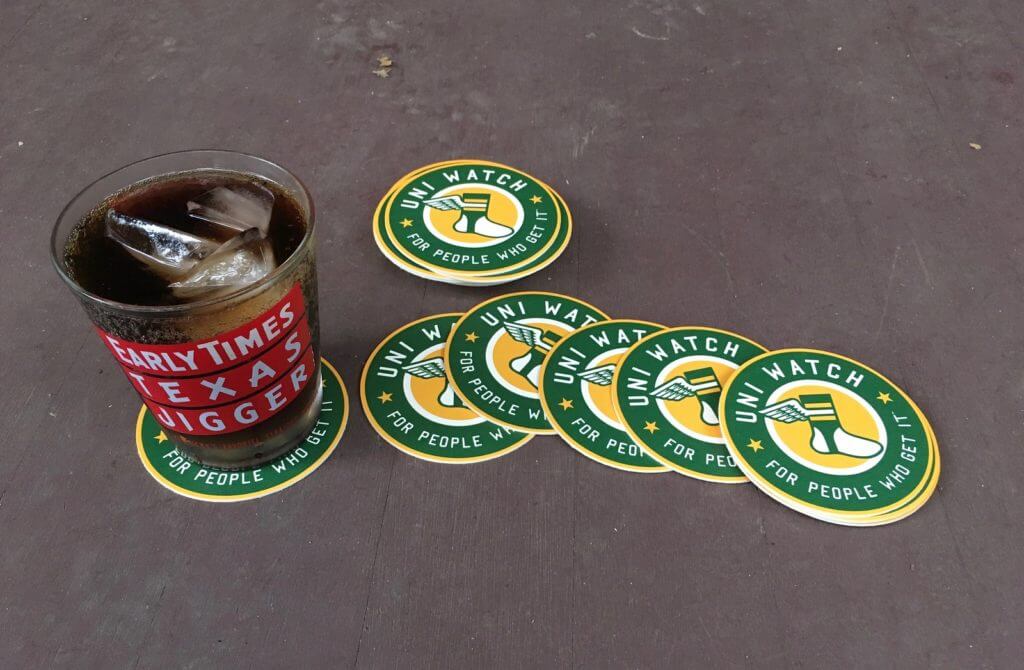 Coasters reminder: In case you missed it on Thursday, I have a small supply of these great-looking Uni Watch coasters. I’m selling them in groups of three coasters for $9 with free shipping. I’ve already sold through more than half of them in the past two days, so get ’em while they last!

Baseball News: Dodgers P David Price has almost always removed his squatchee — or as he calls it, “the ouch button” — since his rookie season back in 2008. However, he hasn’t removed it from his spring training caps so far this month (from @UntillTheNight). … Reds strength and conditioning coach Sean Marohnis has a Reds football helmet that he wears for drills. Here it is on the man himself. “The ‘stitching’ stripe is a nice touch,” writes Joanna Zweip (also from a whole bunch of other readers) . … The Phillies will unveil a “new-look Phanatic” on Sunday (from Frank McGuigan). … The Shift motocross team wore special Padres-inspired helmets and firesuits for their riders at an event in Petco Park a few weeks ago (from John Flory). … Dave (who didn’t give his last name) found this old-school Tigers pin at a vintage shop in Hamilton, Ont. Anyone recognize the logo? … The Empire League, an independent league, is expanding to six teams with the Georgia Rhinos (from John Cerone). … Nice stirrups for Delaware State softball (from Brian Weingartz). … Here’s a really good, thoughtful interview with the Pennsylvania Little League commish who decided not to use the Astros’ team name this season.

Hockey News: The Islanders wore “’27′” patches for John Tonelli’s number retirement last night. The team also all wore Tonelli jerseys during pregame activities (from @cannolifactory). … We now have confirmation that the Golden Knights will have a gold third sweater next season. It will be released sometime this summer (from Wade Heidt). … Robert Morris women wore these nice throwbacks last evening (from Nathan Hogue and Oleg Kvasha).

NBA News: NBA TV tweeted an awesome graphic of every Dwyane Wade jersey in history ahead of tonight’s Wade number retirement ceremony in Miami (from Qumar Zaman). … NBA uni number guru Etienne Catalan had graphics for a whole bunch of new numbers yesterday: Reggie Jackson of the Clippers’ No. 1, the Pistons’ Derrick Walton Jr.’s No. 12, the DeMarre Carroll of the Rockets’ No. 9 and the Grizzlies’ Dusty Hannahs’ No. 5. … The Undefeated has a nice article about how the NBA has mourned Kobe Bryant through sneakers (from Mike Chamernik).

College Hoops News: Utah will retire Wat Misaka’s No. 21 next season. Misaka was the first person of color to play in the NBA, and helped Utah to the 1944 NCAA Championship (from Timmy Donahue). … Last night’s Buffalo/Kent State game had two things you don’t often see on a basketball court: one team with nameplates and the other with vertically arched NOBs (great observation by Timmy Donahue).

Soccer News: NYCFC had some patch issues during their CONCACAF Champions League match against San Carlos (from Steven Brown). … Land-Grant Brewing is producing a line of can designs that look like the most iconic shirts in Columbus Crew history (from John Flory and Jared Sloan). … New logo for FC BATE Borisov out of Belarus (from Ed Żelaski).

Grab Bag: The Japanese Olympic Committee has revealed their podium jackets for Tokyo 2020 (from Jeremy Brahm). … Popular Mechanics has conducted some research on the effectiveness of military helmets in preventing traumatic brain injuries (from Scott Rogers). … Randolph Union High School in Vermont is changing its logo after complaints that it resembled a Ku Klux Klan member on horseback. The mascot name — the Galloping Ghost — will remain, but the illustration will be changed (from Timmy Donahue).

That’s it for today. A lot shorter than Phil’s usual weekend extravaganzas, I know, but don’t worry — he’ll be back next Saturday. — Paul

re: ‘Canes in Hornets colors – go with it! They look great.

The logo works much better for me in the hornets aqua & blue.

ya, ya, I know the tie in between the ‘Canes colors and the official hurricane warning flag….who cares?

Of course I know! But some people don’t know that term, so I used “tournament” for the sake of clarity/expediency/etc.

Can anyone think of any examples of teams from different cities in the same state repping each other? I know it’s pretty common now for teams from the same city, but surely there’s some sorta intra-NC rivalry between Charlotte & Raleigh.

Last year the Rangers had a promo where they gave out hats in Baylor colors. They also did UT and A&M. I could see if they did TCU or Probably some other Texas Schools I’m not aware of too.

Recently the St. Louis Blues wore similar unis supporting the Kansas City Chiefs on their Super Bowl run. Even more of a contrast considering it hasn’t been long since St. Louis had its own NFL team.

Came here to comment that — this has gotta be one of the geographically farthest cross sport support events. Other states where it would make sense would be Tennessee (Grizzlies), the aforementioned Missouri, and maybe Ohio with the Blue Jackets.

This one is different communities in same province in Canada. When I read this, thought about a few years back when the SJHL Kindersley Klippers dressed like the CFL’s Saskatchewan Roughriders.

Distance from Kindersley to Regina is about 242 miles. Though will admit this is a bit of a different animal. The Saskatchewan Roughriders have a huge province-wide following.

Bucks or Brewers ever repped the Packers?

The Wade graphic shows a “03” number heat jersey. Did this actually happen at some point?

I was confused at first as well, but he was drafted in 2003, so I’m assuming that’s related.

The ticker is wrong anyway, it only displays the jerseys he wore as a member of the Heat, not his entire career. There’s no Bulls or Cavs on there.

Do you know why some of the jerseys are highlighted in orange or green?

I believe the green ones are possibly the Christmas jerseys while I’m not quite sure what the orange denotes.

Do you know why some jerseys are highlighted in orange or green?

So if the Golden Knights are going with the gold jersey, I would suspect they will be wearing a gold helmet. Going with grey helmet, gold jersey, black pants would just not look good.

Would recommend that they go with a gold helmet similar to what the QMJHL’s Acadie-Bathurst Titan used to wear:

“The Galloping Ghost(s)” is the best school nickname I’ve ever heard. My high school teams were “Mustangs”…yeesh.

Carolina Hurricanes making news for a second night. Emergency 3rd goalie is playing. Looks to be wearing Leafs pants. Game is in Toronto.

Sorry for the repeat. Just put the game on. Looks like he changed pants in between the 2and and 3rd period. He is going to be credited for the victory. Unbelievable story.

Other than the Tigers road and the odd Blue Jays or Rays alternate cap, David Price has not played for a team with a contrasting squatchee. With the Detroit road cap you have to squint to notice its missing. On the Dodgers cap the contrast is greater and the white squatchee is iconic. Would be interested to know if he’s had the cap altered to make it less of an “ouch” button.