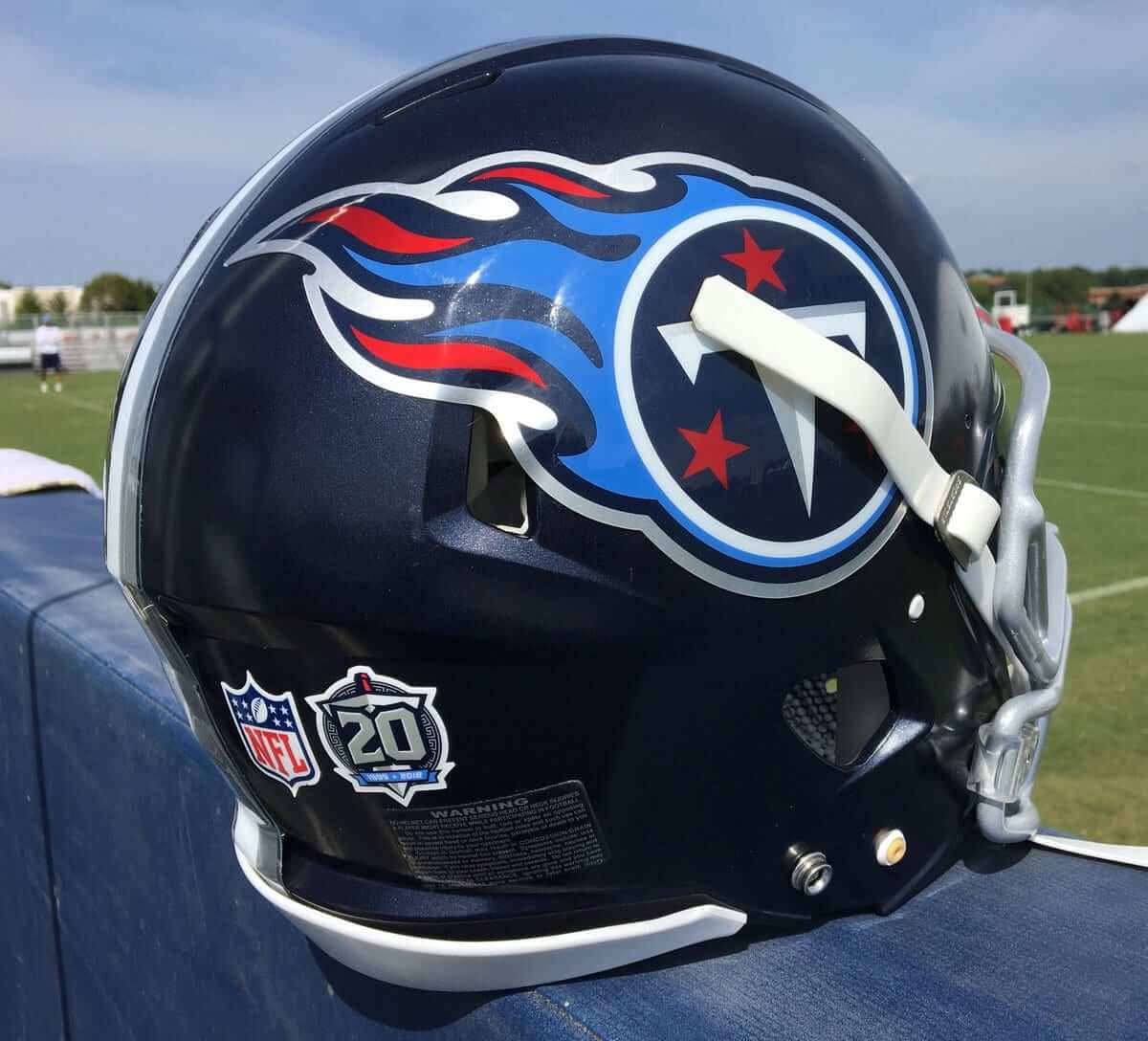 Paul here, pinch-hitting again for Phil, who has this weekend off. More NFL news yesterday, as the Titans added a helmet decal to commemorate the team’s 20th season under their current moniker.

You may have forgotten (in fact, I had forgotten) that this anniversary ordinal logo was originally released way back in February, prior to the unveiling of the team’s new uniforms. At the time, the team said the logo would be worn as a helmet decal, not as a jersey patch — somewhat surprising, given that they went with patches for their 10th and 15th ordinals.

Old man yells at cloud: Braves broadcaster Joe Simpson really stuck it to the Dodgers last night — for taking BP in T-shirts and no socks (as shown in the video above). “Very unprofessional,” he opined. ” “If I were a Dodger fan, I’d be embarrassed.”

Last I checked, BP has no bearing on the outcome of a game and is typically witnessed by more vendors than fans. MLB’s cynical attempts to market BP attire notwithstanding, who really gives a shit what the players wear during BP. Anyone who shows up early for BP is probably the type of fan who can tell the players just from their batting stances or hairstyles anyway.

Footnote: The very unprofessional Dodgers (who are the defending National League champs and are currently leading the N.L. West by a very unprofessional game and a half) beat the Braves, 5-1. After the game, Dodgers utility man Kiké Hernández had a good rejoinder for Simpson’s critique. There’s some additional background and fallout here.

(My thanks to Chuck Kelly, Mark Coale, and MIke Chamernik for letting me know about this one.)

Base ball game: We’ve all seen photos of players engaging in those old-timey “base ball” games played with 19th-century rules, but I haven’t seen much video from those games. The report shown above is pretty good, and provides great views of the uniforms. The only thing I’m confused about is the ball, which seems like a contemporary baseball, not an old-school lemon peel ball or other “dead” ball. Pretty sure the bats aren’t era-appropriate either. But whatever — this isn’t a Civil War reenactment, it’s just a ballgame. Good stuff.

(Big thanks to Nick Jones for this one.)

The saddest thing ever: Russ Scibetti is the president of Kore Planning & Insights, which according to LinkedIn is “a new business intelligence consulting division focused on the sports and entertainment industry.” He’s also the founding editor of TheBusinessOfSports.com and previously worked in marketing for the New York Jets.

Yesterday he tweeted this:

My 6 year old: What are those pictures at the bottom?
Me: Those are the sponsors.
Her: What are sponsors?

How do you explain #sponsorship to a 6 year old? I went with “Those are companies that help the Jets.” Any other ideas? pic.twitter.com/hEeQP42X3K

Scibetti’s bread is buttered by the corporate sports industrial complex, so of course he couldn’t tell his six-year-old daughter that the logos on his VIP pass are advertisements. Instead he had to say that they were from “sponsors” who “help the Jets.” Aw, isn’t that nice of them? They’re so helpful!

As we’ve discussed before, this is basically Orwellian newspeak. It’s remarkable how so many people who are connected or adjacent to the advertising industry are afraid to invoke the word “advertising.” They go out of their way to create squishy-sounding substitutes for it, hide behind verbal fig leaves, construct an entire alternate syntax designed to evoke feelings of fellowship and goodwill instead of transactional commerce (“sponsor,” “partnership,” “helping,” “presented by”) — all to avoid acknowledging that advertising is, you know, advertising.

Gee, I wonder why.

I had a good back-and-forth with Scibetti about this. He said he thought it was “funny” that his young daughter asked about the ads on his VIP pass. As I explained to him, I don’t think it’s funny at all. On the contrary, I think it’s really sad that this is the kind of world she’s growing up in, a world where every square centimeter — even on NFL summer training camp VIP passes — is just a surface or vehicle for advertising.

At the end of our back-and-forth, I asked Scibetti if he’d be willing to let me interview him so we could explore these issues in a setting unconstrained by 240-character limits. He said that sounded like fun and that he’d get back to me in a few days.

Meanwhile, as for Scibetti’s original query (i.e., how do you explain all of this to a six-year-old), I suggested that he and his daughter sit down and watch Idiocracy. That should put everything in perspective quite nicely.

(My thanks to @bryanwdc for bringing Scibetti’s tweet to my attention.) 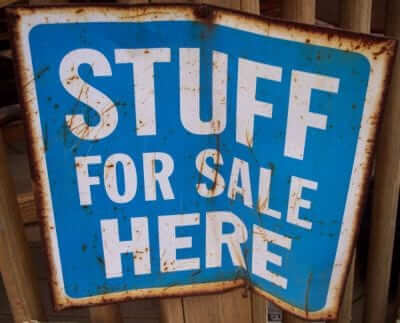 Even more cool stuff for sale: I’ve continued to add more photos of stuff that I’m trying to sell before I move in late August. You can see everything that’s currently available in this Flickr set, and I’ll continue to add a few more each day. I’m also removing items as they sell.

Please click on the thumbnails to see larger versions and, more importantly, to read the descriptions of the items, which among other things indicate whether the item is something I’m willing to ship or if I’m only offering in-person pickup. (You can see even larger versions of each photo by clicking the download icon and choosing “View all sizes” from the resulting popup menu.)

If you’re interested in any of this stuff, please get in touch and make me an offer. I’ll continue to add more items to this photo set each day, so stay tuned. Thanks for listening.

Sorry, no Ticker today, as I’ve been busy dealing with a family-related matter. We’ll be back with a full slate of content tomorrow. Until then, enjoy your Sunday. — Paul

In the digital age, there is a word for people who play Buzz-word-Bingo to sell ad space on everything that a client can imagine, to c-c-connect with their clients.

I meant to type.

It’s just too bad Jim Coc- er, Brockmire didn’t get that job with Atlanta. It would be interesting to hear what he’d have to say about the Dodgers’ batting practice attire, and how he’d say it.

Very surprised by your stance on the batting practice attire.

Isn’t this just another example of uniforms becoming non-uniforms like the ridiculous hosiery these days?

If a player is representing the team at the place of their performance they should be in uniform!!!

I honestly couldn’t care less about what a player wears for BP. And BP jerseys are such a scam to begin with, I’m in favor of anything that “disrupts” them.

guys, it’s fucking hot in Atlanta. it kinda sits in a bowl, and it just radiates heat. if I had to play a 3 hour game, but spend all day at the ballpark, I’d try to find the coolest things I could to keep from having my utter soul sucked from my body.

Hope your mom is OK!

And any of us would trade places with them in a heartbeat. And I, for one, would take BP in Frank Gorshin’s old Riddler costume if that’s what the team wanted.

I adore Idiocracy, but, geez, it’s not suitable for a 6 year old.

Actually, I don’t think advertising is a difficult concept for a 6 year old to grasp. It’s gotta be small potatoes compared to explaining all the ads for boner pills they run during the games.

I was kinda/sorta kidding about Idiocracy.

It’s the father who really needs to watch it, not the kid.

Big gasbag high and mighty joe simpson wants to criticize the dodgers when his own braves dress like it’s spring training or casual friday for alll their road games.

How bout a nice hot cup of STFU, joe?

(I was unable to comment on mobile version on iPhone)

Yes, that was mentioned in the link I provided.

A team named the Jets really should shoot for the most modern logo and uniforms possible.

It’s one thing to stick to a classic look if that look brings back memories of past dynasties and traditions. The Jets need to forget about Super Bowl III and come up with something that will actually excite people.

Carrying over from yesterday since I missed it, but since it was a promotion carrying on through the weekend: regarding the Hartford Yard Goats’ crossover jersey.

I think they butchered it. If they don’t want to do the exact stripes, that’s one thing, but the lace-up collar bit was just stupid because, well, the Hartford Whalers never wore a lace-up collar.

I hope your Family situation calms down soon

We, Woodstock Hilltoppers, just played vintage ball at Ft. Trumbull (Thames BBC) on Saturday!!! Great setting for a great game. Let me reassure you that we do use replica lemon peel balls and handmade bats from 19th C. specs (not sure how that Louisville Slugger got in there) Please support your local teams. In CT: woodstockvintagebaseball.com, thamesbbc.org, Wethersfield Red Onion, lisbontunnelmenbaseball.org, ctvbba.org

For a good laugh, check out Conan O’Brien’s visit to a “old time” baseball game.