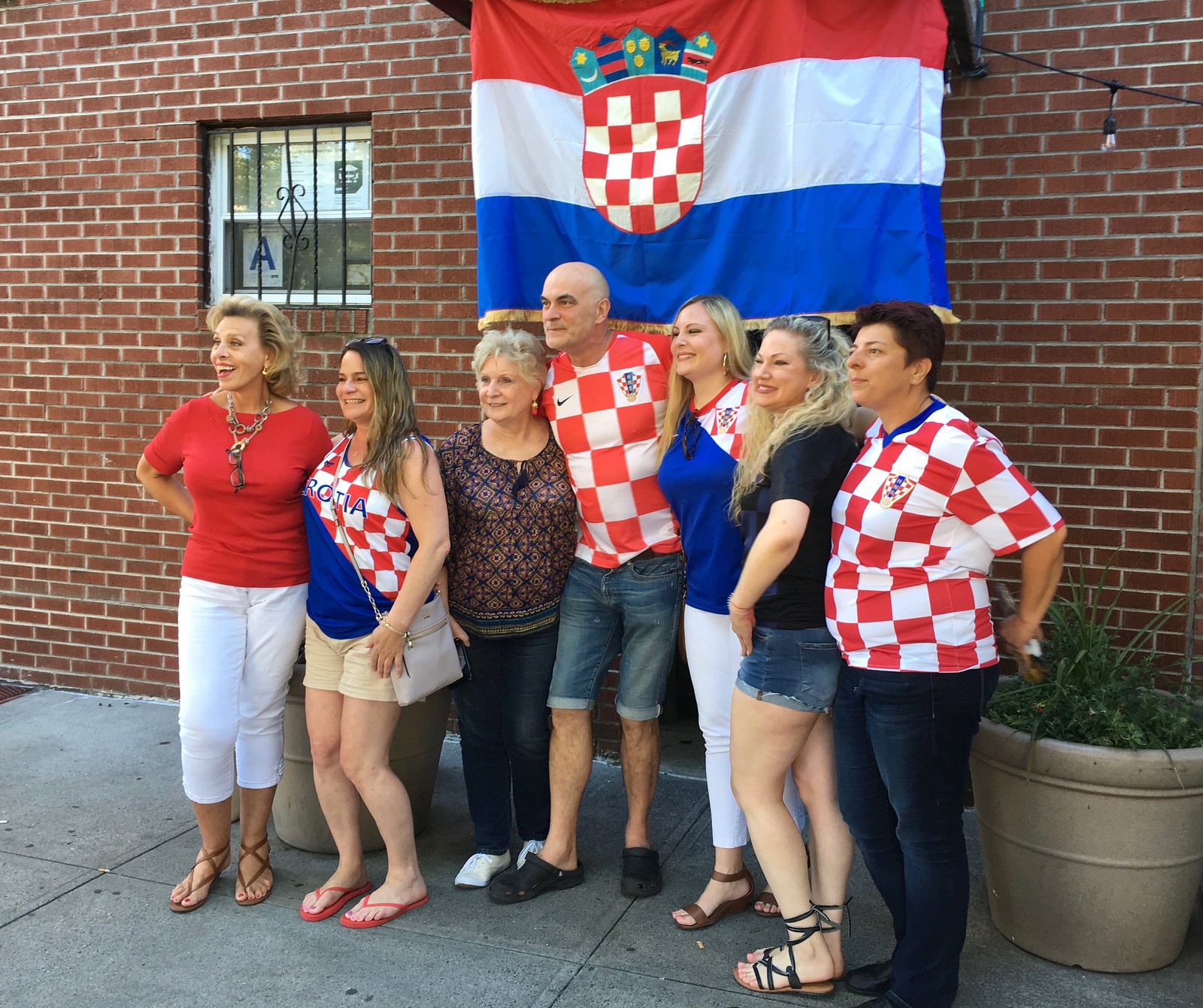 Paul here, pinch-hitting again for Phil, who has this weekend off.

So: The Tugboat Captain is of Croatian extraction. Her father was born in Pakoštane and lived there through his mid-20s. Neither the Captain nor I cares about soccer, but when Croatia made it into the World Cup quarterfinals, we decided it was time to pay attention. So yesterday afternoon we went off to the United Miners Soccer Club, an Istrian sports bar and restaurant in Queens, where we joined dozens of Croatian expats who were gathering to watch the game.

Unfortunately, neither of us owned any red/white checkerboard clothing to wear for the occasion, but a lot of the patrons and staff did. The place had more red and white checkered fabric than an old-school Italian restaurant: 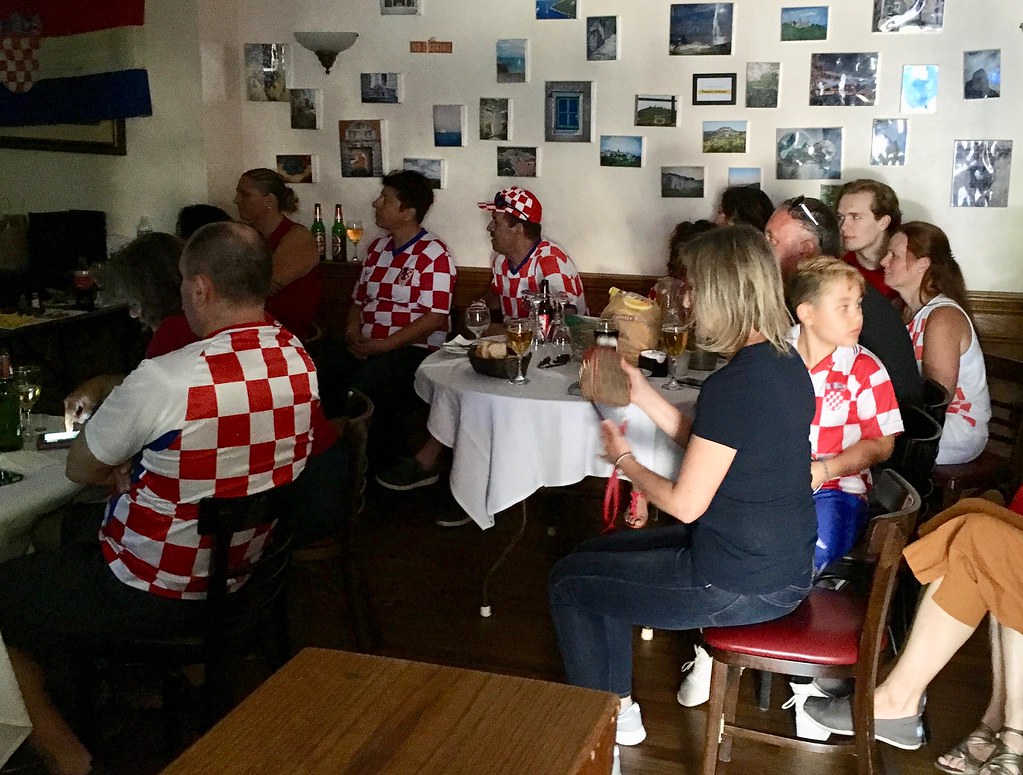 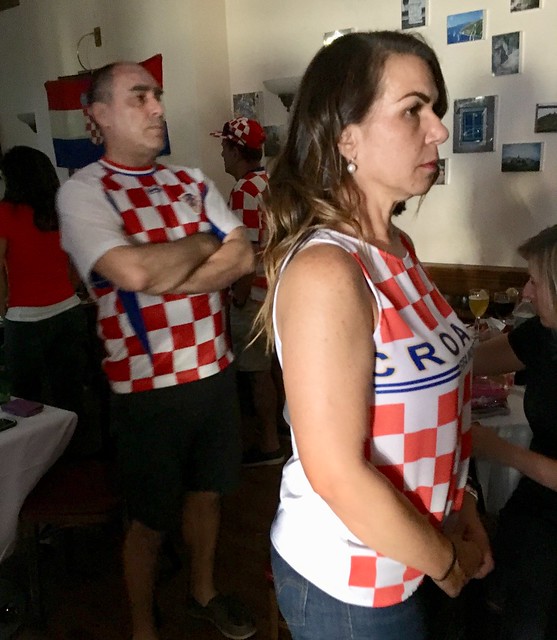 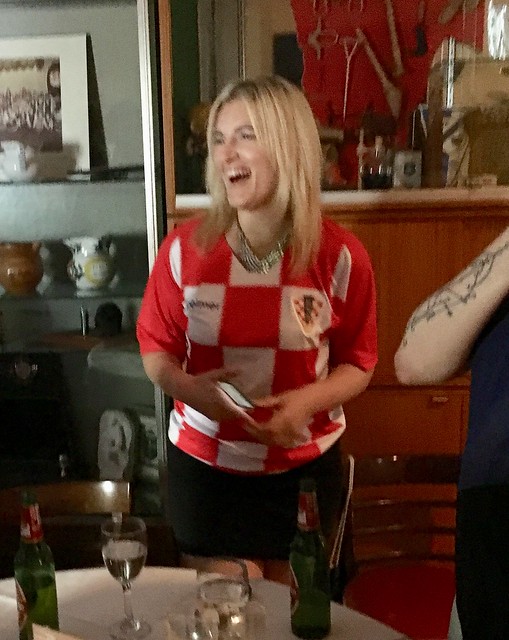 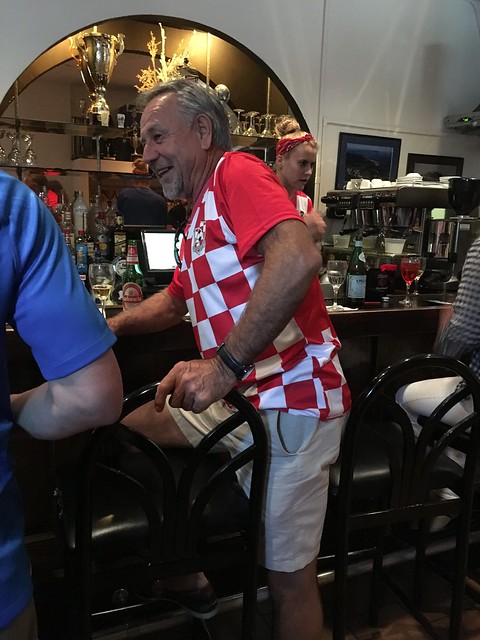 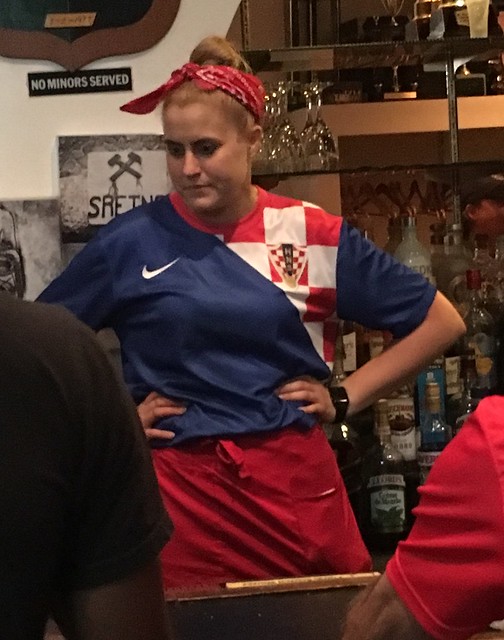 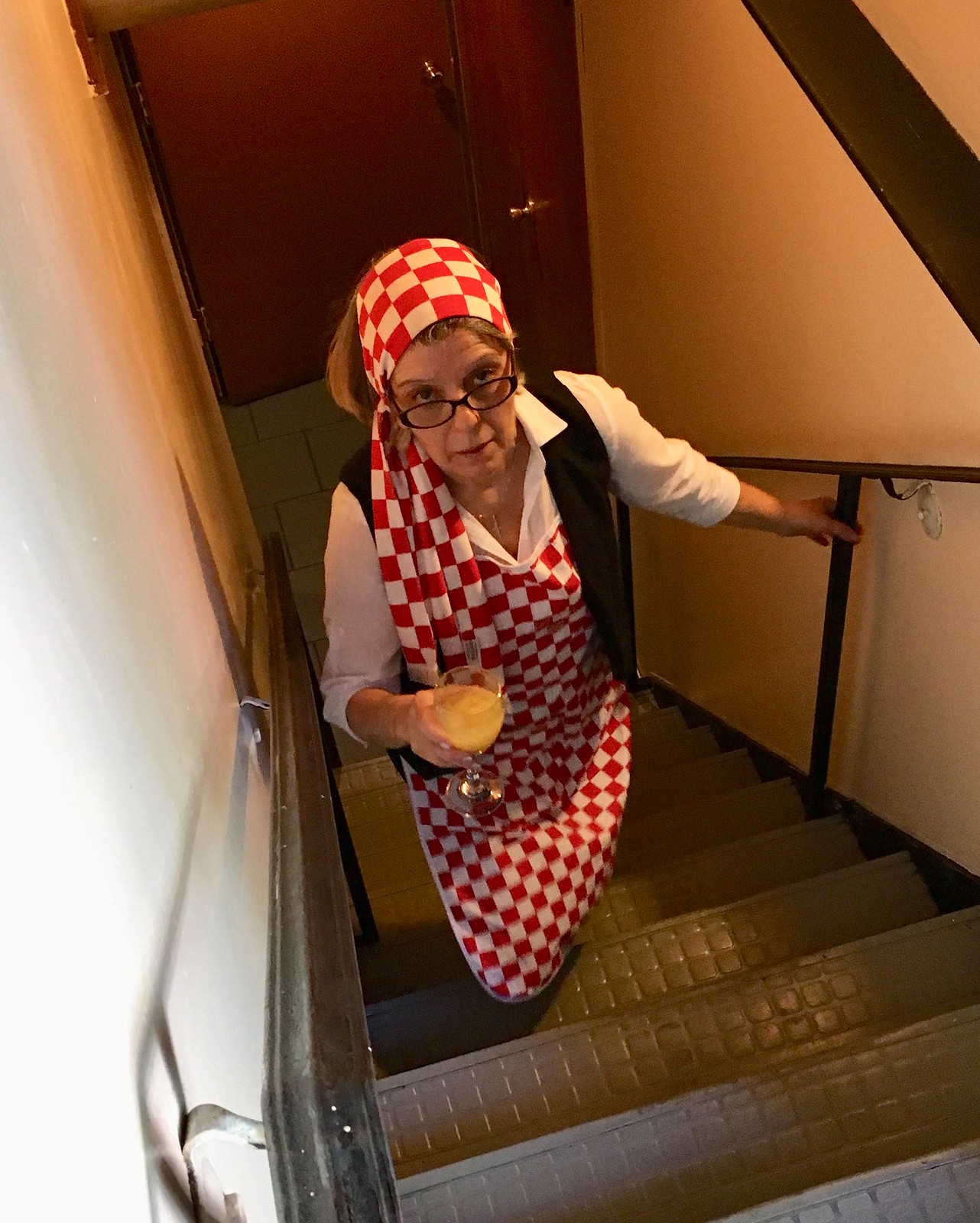 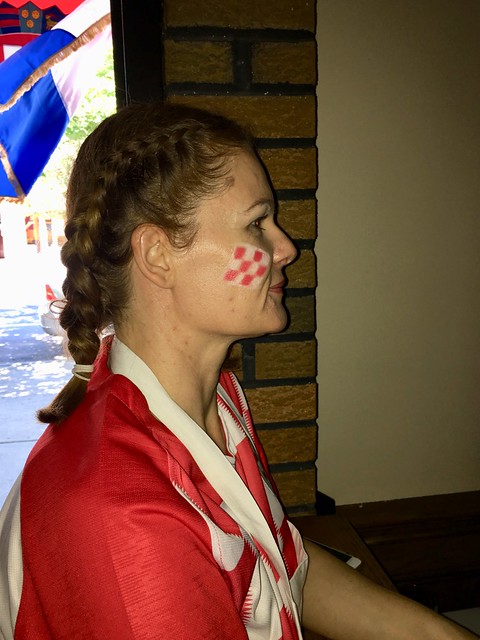 Too bad the Croatian players were wearing their BFBS change kit instead of their checkered primary set — a big disappointment.

We also enjoyed an excellent order of ćevapčići, the skinless beef sausage commonly found in the region of Croatia, Serbia, and Bosnia. So good! Check this out (click to enlarge): 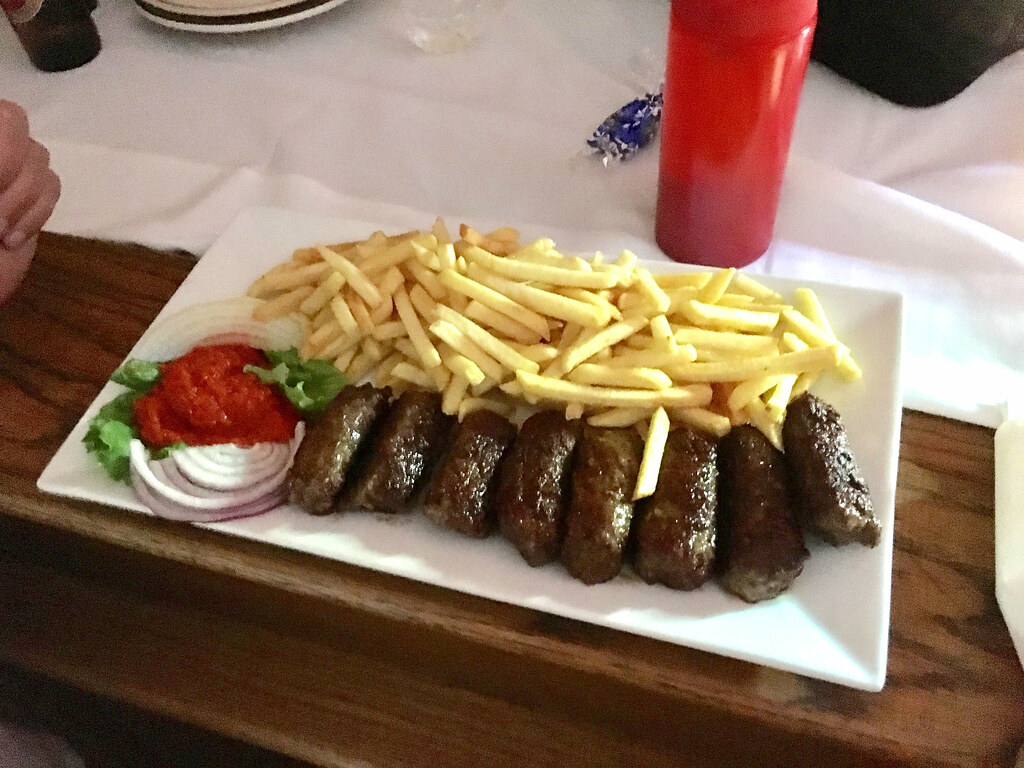 As for the game, we had a blast watching it in the company of so many Croats (gotta love New York for having such a wide assortment of ethnic enclaves), and the Captain texted her parents to let them know she was representing the family heritage. Naturally, everyone was happy about the results . When Croatia won on the final penalty kick, the place erupted and several people hugged us. Just a great, great time.

Next up, for the semifinals on Wednesday: England!

I’ve also been dealing with a family situation in the midst of all this, so that’s it for today — no sub-ledes, no Ticker. Sorry about that, and thanks for understanding. But we’ll have a full slate of content tomorrow, and I have some really good stuff planned for the coming week. See you then.

Love it, Paul. I’ve always wanted to make it to a watch party, which I think you stumbled upon. Glad to see that the fans were welcoming to y’all.

If one is in my hometown Vancouver and wants to go to a viewing party for a Croatian World Cup game, there is no decision needed about where to go. The only location to hit up is the Croatian Cultural Centre. Over 600 fans at the viewing party yesterday:

The Croatia change kit isn’t BFBS in the usual sense (marketing). It has a purpose, to be a different color than their main kit to provide visual distinction. Traditionally, Croatia uses some shade of blue as their change kit, and this year’s model looks to be navy/black checks, so it has a little common ground from custom – and they worked in the checked pattern, albeit in a subdued way that doesn’t show up on TV. If given a choice, it would be likely that Croatia would wear the red/white checks, but it wasn’t an option against Russia, who wear red/white and whose change kit wasn’t an option here.
Best of luck with your family situation.

Oh, I know — I understand the reasoning behind it. It was just a drag to see that they weren’t wearing their usual checks. And I prefer a bit of contrast, so the matching jersey and shorts were also disappointing.

If my memory serves me correct, they haven’t worn their home kit since the opener vs Nigeria.

They won’t wear it against England, either. England will wear all white.

I’m supporting England, but I went to a watch party at a German bar for their first game (against Mexico). Lots of shirts around but also red/yellow/black in the vein of the people wearing checkerboards here.

I actually wore my Uni Watch shirt and nobody noticed it, not even the people I was with.

Similarly, I went to watch the Mexico Germany game at a Mexican restaurant, and all of the workers were wearing an El Tri jersey. Place went crazy when Mexico scored, but most of the diners didn’t know what was happening, so it was only the workers and my family who celebrated.

I’m not a big soccer guy but I am all wrapped up in the World Cup. I love it and, being retired, I have lots of opportunity to watch the games!

I went to watch the England – Sweden game at an English restaurant/pub with a buddy who’s a huge soccer guy yesterday morning and had a great time. Can’t beat a couple of beers at 9:00 AM!

Best of luck with your family situation, Paul.

I hope the family issue is resolved to everyone’s satisfaction, Paul.

Cevapcici are amazing when done properly. Glad you found out the magic that can be found in those little flavor bombs! The Sarajevo Lounge locally in Seattle does them up perfectly.

I’ve played music from the Balkans semi-professionally for over 4 decades, including tamburitza music from the Tugboat Captain’s ancestral home. I too, haven’t paid a whit of attention to soccer, even with the local Sounders winning the MLS cup a couple years back. But I’ve been watching the Cup as best as I can. Switched to youtube tv recently and thankfully lots of sports, including all the WC matches are there. All my Croatian and former Yugoslav friends are over the moon about the current team. It’s surprising to me, given the war in the 90s, that people from Kosovo, Macedonia are on the Hrvatska football train.

Not really a soccer fan either, but I am paying attention to the unis on the field. The contrasting Belgium/Brazil kits were particularly eye-pleasing.

I can’t pronounce it or spell it properly but I’ll have an order of sausage and fries, as pictured.

Careful, Paul. You might get to like it and then what would happen to the World. It’s shaky enough already ;)

Paul, I hope everything with the family situation is resolved with a minimum of pain. From a UniWatch perspective, I’m glad that the World Cup final four all have great-looking first-choice kits. I’m hoping Croatia gets to wear the red and white for its match with England.

That reminds me of the Rhinegold ads I’ve heard on old Mets games from the ‘60s, about there being more Greeks in New York than Athens, more Germans than in Munich, etc.

Surprised you didn’t go a little bit into the history of the checkerboard design, especially since the politics of the former Yugoslavia made the headlines earlier in the tournament when Switzerland’s Xhaka, Shaqiri, and Lichsteiner were disciplined for taunting the Serbian team with hand gestures.

More often than not I see the Croatian national team’s design associated with WWII fascism, making it a touchy subject on its own.

Anyway, it’s surely one of the coolest soccer looks on the planet. … Brown University, I believe, currently uses the checkerboard.