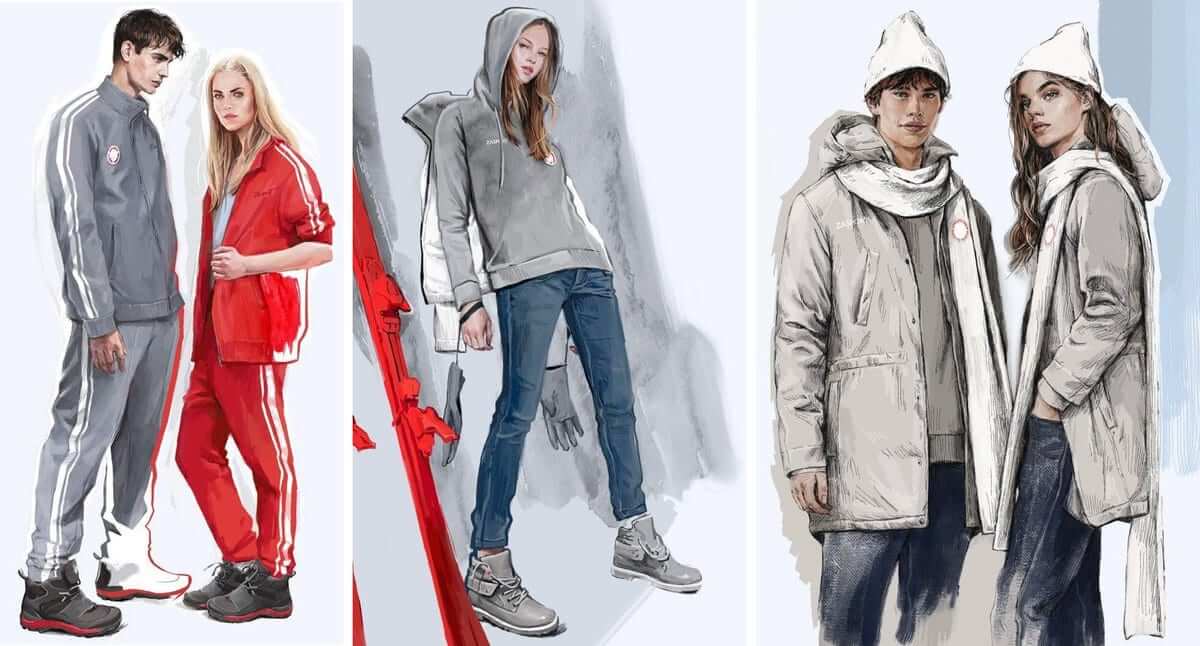 Four weeks ago, the International Olympic Committee released the uniform guidelines and logo for the “OAR” team — that’s “Olympic Athletes from Russia.” At the time, we were told that the uniforms would be forthcoming in due time.

That time turned out to be yesterday, when the Russian sportswear company Zasport released a bunch of new uniform renderings. In addition to the ones shown above, there are these: 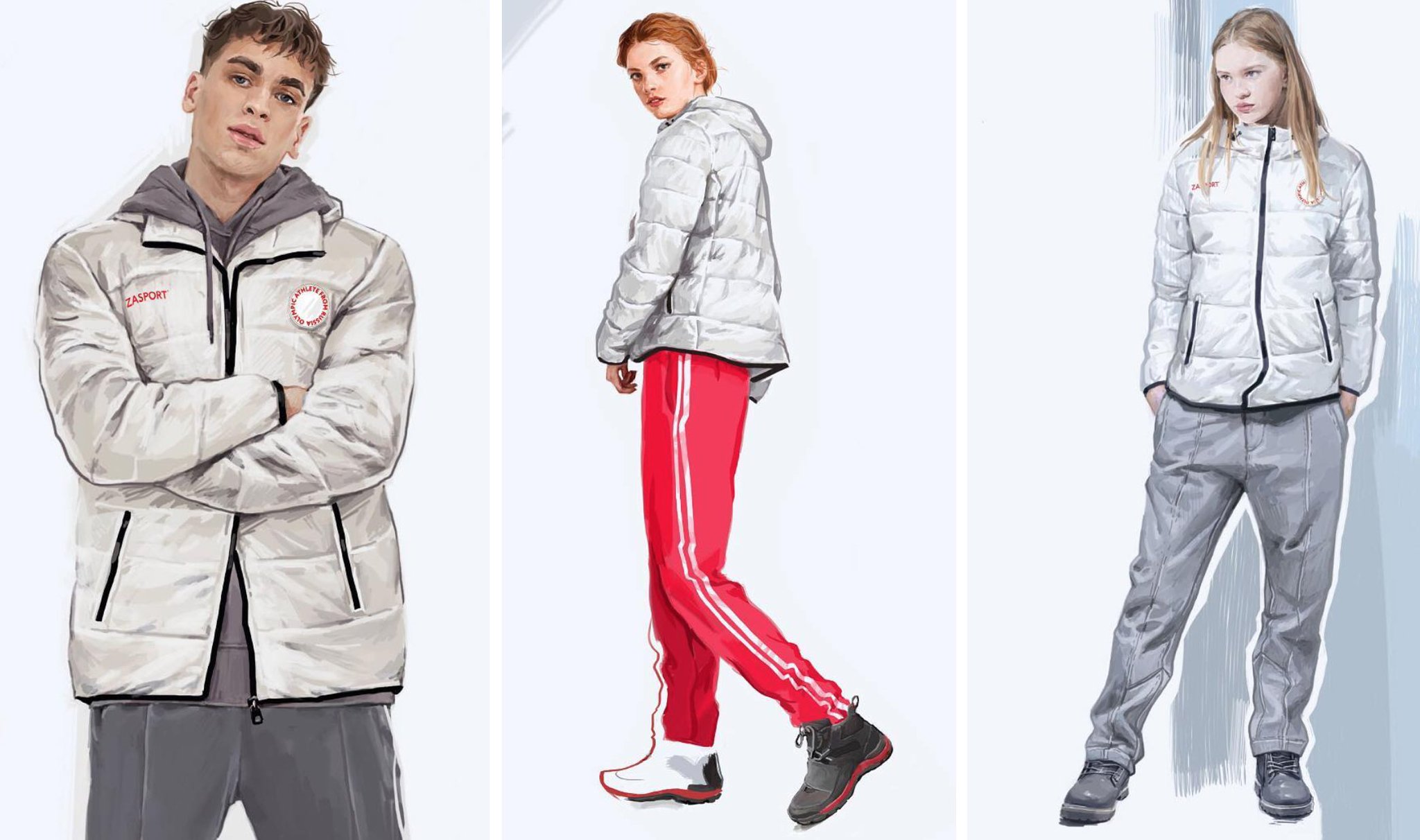 As you can see, Ralph Lauren won’t have to work too hard to outshine these designs at the opening ceremonies. But that’s by design — the whole point of the IOC guidelines was to keep the OAR uniforms as plain as possible.

It’s still not clear who’ll be wearing these uniforms, since the IOC hasn’t yet announced which Russian athletes, if any, have been certified doping-free. But we’ll reportedly be getting the word on that next week.

Meanwhile, has anyone heard anything about what the newly merged North/South Korea team will be wearing? I’m assuming there’s no way that the North athletes would wear the South’s uniforms, or vice-versa, so they’ll presumably have to come up with a new set of attire on the fly, right?

Uni Watch Exclusive — NWHL All-Star Jerseys: The National Women’s Hockey League will hold its All-Star Game in Minnesota on Feb. 11, and Uni Watch has been given an exclusive first look at the jerseys. Additional info on the NWHL’s All-Star weekend is available here.

The Ticker
By Kris Gross

Baseball News: Reader Daniel Carroll received a postcard regarding his Mariners season tickets with this logo. “It’s the M’s primary mark, without any letters, and all white space filled in with teal, including the baseball in the center,” he says. “Never seen it before, struck me as odd.” … The Baseball Hall of Fame used an obvious reverse photo of Hall of Fame candidate Livan Hernandez on their website (from Andy Chalifour). … Enjoy this video from @Cut4 featuring the Orioles and Angels in 1999 on Turn Ahead the Clock night (from Nick). … A follow up to yesterday’s Ticker item about the Indianapolis Indians’ “6672” sleeve patch recognizing the shareholders that kept the team alive: Douglas Brei passed along a note that the Rochester Red Wings had a similar “8222” patch for the same reason. They also retired No. 8222 “in honor of former team President Morrie Silver, who spearheaded the ‘72-day Miracle’ community stock drive to purchase the team from the St. Louis Cardinals in 1956/57, effectively saving the oldest minor league franchise in all of professional sports.” … Mikey Brethauer spotted a fan wearing this Twins/Vikings mashup cap during Sunday’s Vikes/Saints game.

NFL News: Vicis has announced a price drop on their Zero1 helmet. As you’ll recall, the helmet’s price point was one of the issues that Vicis CEO Dave Marver discussed in his recent interview with Paul (thanks Phil). … Enjoy this time-lapse video of the Eagles re-sodding their field for the NFC Championship Game (thanks Phil). … The AFC Championship Game is between the Jags and… Celtics? Whoops! (from Robert Williams.) … Cross-listed from the baseball section: Mikey Brethauer spotted a fan wearing this Twins/Vikings mashup cap during Sunday’s Vikes/Saints game. … With the Vikings and Eagles set to face off for the NFC title this Sunday, here’s a look back at a memorable game between those two teams 40 years ago (from Mark Wilkes).

College Football News: This video shows Ohio State players getting custom-fitted for their helmets (from Moe Khan). … Here are some radical uniform redesigns (thanks Phil). … An interesting note from Andrew Cosentino: Half of Virginia Tech’s opponents in 2018 wear gold helmets.

Hockey News: Goalie Joonas Korpisalo was recently called up to the Blue Jackets, and it looks like the equipment staff ran out of Ks (from Ted Levin). … March 24 is Nickelodeon Night with the San Jose Barracuda, AHL affiliate of the Sharks (thanks Phil).

NBA News: Most of the recent NBA team redesigns have been handled by Rare Design, a small branding firm in Mississippi. Here’s a good interview with their CEO (from Jeremy Dalton). … Cross-listed from the NFL section: The AFC Championship Game is between the Jags and… Celtics? Whoops! (from Robert Williams.) … The Rockets gave away James Harden finger puppets last night (from @igTXSalazar).

Soccer News: Following the recent death of pioneering black player Cyrille Regis, all Premier League teams will wear black armbands this weekend. Regis will also be honored with a minute of applause (from Mark Caole).

I don’t understand the resodding……wouldn’t it come up too easily because the roots can’t take hold this quickly?

A little more background on the re-sod: link

RE: Half of Virginia Tech’s opponents in 2018 wear gold helmets. Unless, of course, Pitt, GT and maybe even FSU wear alt helmets…

For the Korea Olympic team, there aren’t actually any athletes from the North that qualified except the ones that are being invited to the hockey team, and it sounds like they’re going to meet with the IOC about the hockey team tomorrow.

Mildly interesting: the NWHL doesn’t actually have a Minnesota team, even though that’s obviously a good place to have the All-Star Game.

NWHL: Yes, they prefer a neutral site for their ASG (although I don’t really understand why).

The Toledo Mud Hens are trying to find what number Kirby Puckett wore during his short stint with them in 1984.

They found it on a few old scorecards. He was #28

The Sharks’ AHL affiliate is also in San Jose? Are there any other Teams and affiliates who share a city?

For years the Flyers’ AHL affiliate, the Phantoms, were also in Philly. They drew solid crowds due to the more family friendly pricing and Philly being a big hockey town. The only reason they moved out of town was that their home (the Flyers former home) the Spectrum was being torn down. I guess since San Jose’s arena doesn’t also host an NBA team they are able to accommodate two hockey teams.

The Toronto Maple Leafs minor league team the Toronto Marlies also plays in Toronto (not at Air Canada Centre but at a smaller arena).

Technically the Mets and Yankees play in the same city as their Short Season-A affiliates – the Brooklyn Cyclones and Staten Island Yankees, respectively. But at least those are in different burroughs. I’m not aware of any major teams playing in the same arena/stadium as one of their affiliates other than the Sharks/Barracuda.

Looks like the Vikings are wearing black armbands on their left sleeves in that 1978 game.

According to GUDB this was for an assistant coach who died.

OAR – I am mildly annoyed they get to still wear their countries name.

That Mariners logo looks like the Winnipeg Jets logo.

Two things…first, every time I see OAR in all caps, I start singing OAR songs in my head and don’t think about Russia…second, as a Clemson guy, in a vacuum I actually sort of like that uniform concept, but as a traditionalist, anything that doesn’t include an orange helmet gets a thumbs down from me.

every time I see OAR in all caps, I start singing OAR songs in my head

That’s funny. It always makes me think of this:
link

Never heard of either of them. O_O

I also thought of Skip Spence. Moby Grape, Quicksilver and the Airplane, not a bad resume.

Korpi has been the Blue Jackets backup goalie for the last three years and that is definitely a K. It’s just wrinkled.

That was my thought seeing the pic, that the jersey is just bunched up there. Supported by link in which it is pretty clearly a K.

So the guy who sent it in was totally wrong. Even uni-watch sees FAKE NEWS. (Lol)

What’s the over under on the Jags-Celts game?

Minor correction: That Orioles/Angels Turn Ahead the Clock game was a Sunday day game on July 25, 1999, not a night game.

“So far, the talks have included representatives from the two Koreas and Pyeongchang organizers. The International Olympic Committee will take a more high-profile role this Saturday, when IOC President Thomas Bach welcomes all three delegations.

Topics at that session will range from the names and number of North Korean athletes who will participate, as well as matters of protocol around the regime’s flag and anthem, and North Korea’s Olympic uniforms and involvement in ceremonies at the Pyeongchang Games.”