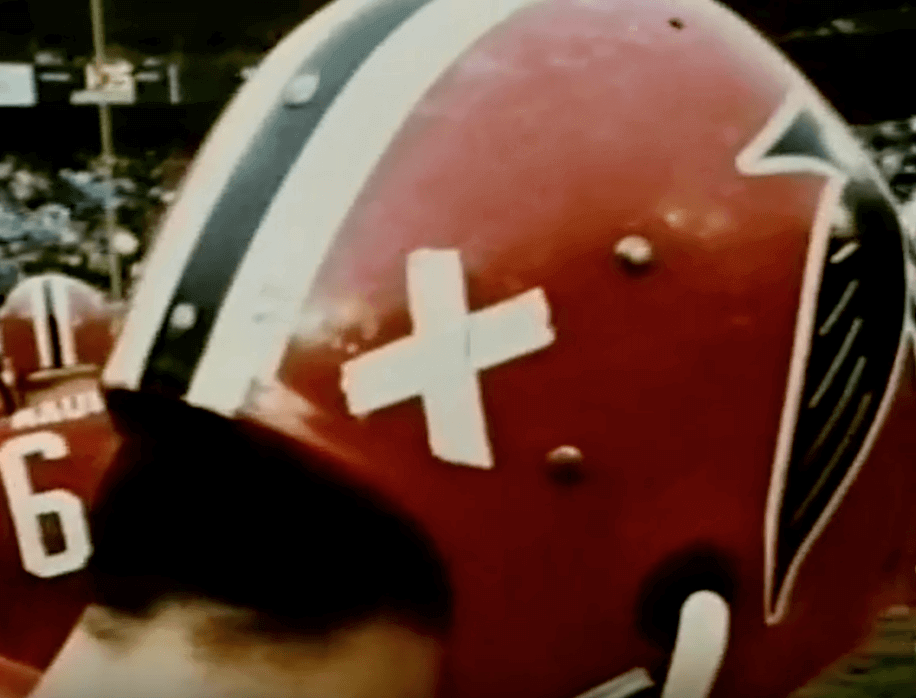 The image shown at right is from the Falcons’ home opener in 1971. What’s with the white “X” on the helmet? The answer to that question provides a nice little uni-related storyline that I hadn’t been aware of until reader Bill Kellick recently brought it to my attention.

Here’s the deal: In the 1971 NFL draft, Falcons coach Norm Van Brocklin chose a bunch of largely unknown players from smaller colleges, and a local newspaper referred to it as the “Brand X draft.” You don’t hear the term “Brand X” anymore, but it was commonly used in advertising back in those days, usually referring to a nameless or generic product (i.e., “Here’s how our name-brand product performed against Brand X”).

As it turned out, 10 of Van Brocklin’s draftees made the 1971 roster, and three became starters: wide receivers Ken Burrow and Wes Chesson, and cornerback Tom Hayes. For these rookies, “Brand X” became a badge of pride, and the three starters all wore white “X” marks on their helmets, like the one shown above, for that home opener.

When preparing this post, I originally had some video footage that showed all three of the X-clad players and provided a bit of the backstory, but that video has since been removed from YouTube. Grrrr. Here’s hoping it reappears at some point.

I did some additional research but couldn’t determine if the seven non-starting rookies wore the “X.” It’s also unclear whether this was just a Week One thing or if it extended deeper into the season. Anyone..? (At the very least, the term “Brand X draft” was used for awhile. On Oct. 3, prior to a Week Three game against the Lions, Van Brocklin said, “[The rookies] have made our Brand X draft look pretty good.” But it’s not clear whether the players were still wearing the white tape on their helmets at that point.)

Of course, they’d never get away with any of this in today’s NFL. But it’s a nice little story from yesteryear.

(Major thanks to Bill Kellick for schooling me on this one.) 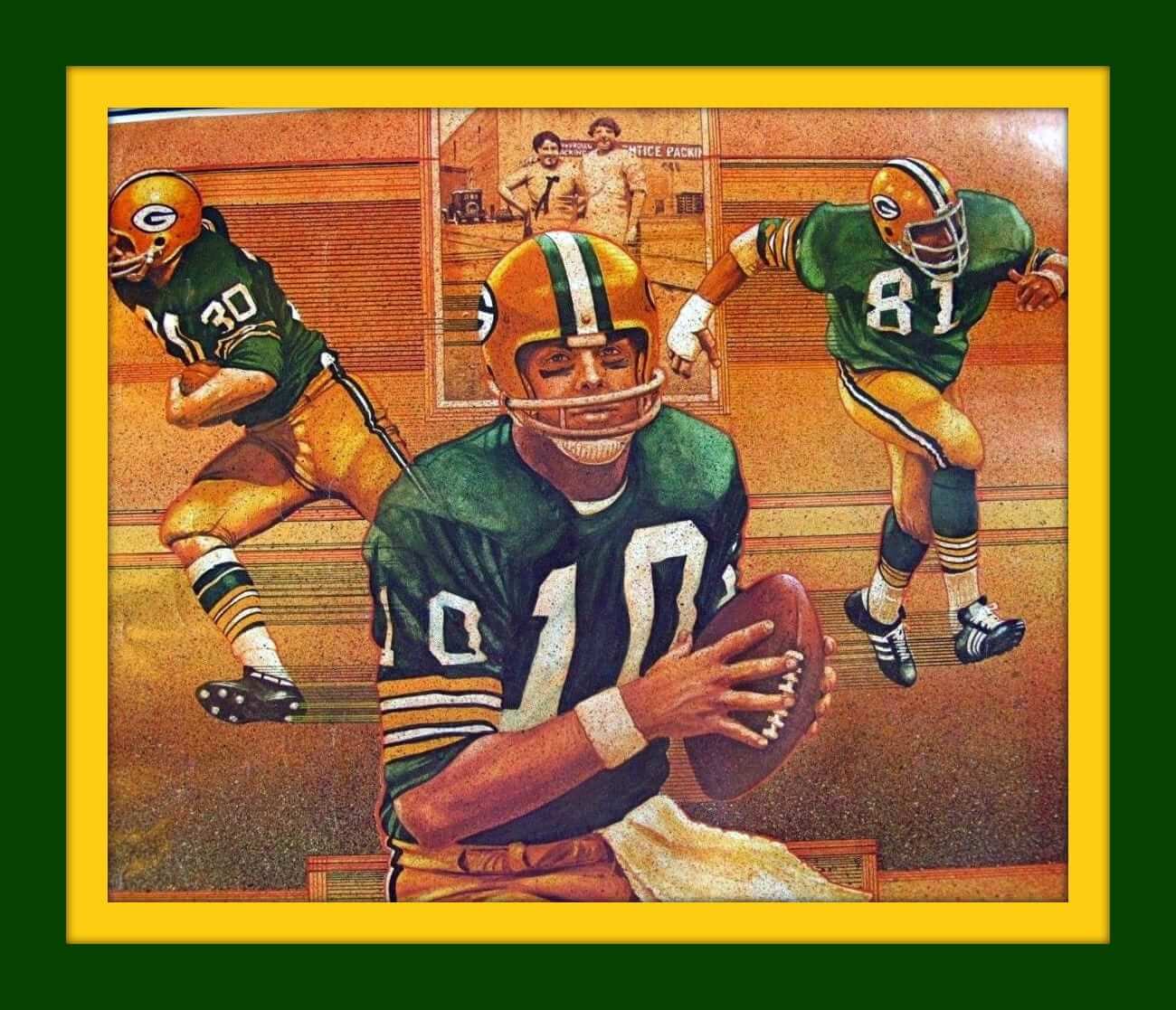 While Dave Boss (gasp) is correctly referred to as The Master around these parts, the poster series from Damac can’t be overlooked. Boss was retro, while the artists who drew for the Damac line were much more contemporary, as we see here on this 1979 Packers poster featuring quarterback Lynn Dickey.

Now for the rest of this week’s picks:

• Here’s another Damac poster, this one by Chuck Ren, for the Seattle Seahawks.

• And believe it or not, there seems to be wallpaper consisting of those vintage Damac designs!

• Look how simple this San Diego Rockets pennant is. It looks like it was hand-drawn! Probably a stock illustration that was used by many different teams.

• We all know how the (pick your own descriptor here) black 49ers uniforms look, but Starter was putting the team in black years ago with this team jacket. A prediction of things to come.

• I’ve followed the Cowboys off and on for decades, but until now, I never knew their early logo was referred to as “Cowboy Joe,” as on this drinking glass.

• Absolutely perfect condition for this 1970s New York Jets helmet bank. This is one of the helmets that were given away all over the country by banks. The Jets one is interesting due to the placement of the decal, which should be more slanted in keeping with the helmet profile.

• We’ve all seen the black NFL thermal mug from the late 1960s and early 1970s- but this is the first time I’ve spotted an ice bucket with the same design.

• Here’s a miniature New York Jets beer stein, noting that they were “Super Bowl III” champions. But not wearing that helmet!

Baseball News: Uniform designer Todd Radom has been ranking the top 30 logos in MLB history throughout this season on the Baseball Tonight Podcast. Yesterday, he finally completed his list. Can you guess which logo was in the top spot?

NFL News: A member of the Falcons’ digital media staff tweeted yesterday the team had some “uniform news” coming this week (from Blake Pass). … One Cowboys player wore cleats with the Tasmanian Devil cartoon character during warm-ups yesterday (from our own Kris Gross). … From Sunday: Odell Beckham Jr.’s cleats included the phrase “No FG club. Not now. Not ever.” (from McGrit). … Washington CB Josh Norman wore a Mexico men’s national soccer team jersey during postgame interviews on Sunday (from Ryan). … Former Packers players were at Lambeau Field on Sunday and their polo shirts looked like they were a distinctly non-Packers shade of green (from Jeff Ash).

College Football News: In response to Arkansas wearing Cowboys-themed unis at JerryWorld over the weekend, a Texas A&M fan blog mocked up some Aggies/Houston Oilers unis just for fun. The photos even circulated on Reddit and other social media sites as if they were real (from David M.). … Southern Miss’s throwback helmets are ready to go for this weekend. … In this graphic of Penn State RB Saquon Barkley, his helmet striping is cut off a bit short (from JJ). … The ACC Tracker has been updated through week four.

Hockey News: The Golden Knights have embedded the names of their season ticket holders into their home ice Additional info here. … The Lightning will retire No. 4 for former C Vinny Lecavalier (from Moe Khan). … A former assistant equipment manager for the Reading Royals of the ECHL is accused stealing team equipment of and selling it on the black market (from John Muir). … Freshmen on the University of Alaska-Anchorage hockey team dressed up in full uniform for a UAA volleyball game over the weekend (from Zeke Perez Jr.).

Basketball News: Carmelo Anthony showed up to Thunder media day wearing a hoodie under his jersey. … The Sixers have a No. 0 and a No. 00 on their training camp roster (from Jackie Treehorn). … One Bulls player went through media day in a jersey that was blank on the back — no number, NNOB. … In this video posted to Twitter, Celtics G Kyrie Irving is wearing red-trimmed shoes that he likely wore with the Cavaliers (from @SidDidWhat). … Members of the All Blacks, New Zealand’s national rugby team, were working out in NBA jerseys the other day (from Paul Friedmann). … Xavier plans to unveil new new uniforms shortly (from David Fleck).

Grab Bag:  Switzerland’s home kit for the 2018 World Cup has been leaked (from Josh Hinton). … Virginia Tech will unveil a new university logo today (from Andrew Cosentino). … Yesterday’s note about cycler Peter Sagan holding on to the rainbow jersey prompted  JohnMark Fisher to send along this Wikipedia article that explains the jersey colors in cycling. … Rand Martin was at RF McDougall’s in eastern Washington recently, and noticed the bar was adorned with brightly painted apple crate labels.

The Falcons announcement is now up; it is their uniform schedule for the year. Looks like they are wearing throwbacks this weekend against Buffalo and in a few weeks against Tampa.

Re: the Damac Packers poster, while Lynn Dickey did wear #10 for the Packers, it appears the artist used Jim Grabowski, Scott Hunter and Willie Davis as the models, changing their uniform numbers. Grabowski was 33, Hunter 16 and Davis 87.

While far from definitive, this highlight video of the Falcons/Browns game in week 7 of the 1971 season shows Ken Burrow catching a TD around the 2:24 mark and he appears to have a white marking on his helmet in the proper area while no other Falcons helmet shown in the video has anything in that area of the helmet.

Good work, Paul. Like you said, not definitive, but worth further investigation.

Lots of good stuff in this entire video:

Starting at the 0:34 mark is a receiver catching a pass with his chin strap not buckled. That then morphs into a couple of segments showing the Falcons punter kicking without his chin strap buckled.

Summerall’s commentary is priceless, as well…one example being of the punter winning the “Annual Gary Collins ‘Die Like A Swan’ El Foldo Award.”

Dick Shiner, #11 for the Falcons, not even wearing a chinstrap?

I noticed that, too, but got distracted and forgot to comment on it. Thanks for catching it.

On a side note, that’s about the best look the Browns have ever had. Much much superior to what they wear these days.

Bulls player with blank jersey was Jarell Eddie. Jaylen Johnson had the same thing. Both were signed Monday and will have their jersey numbers and names photoshopped in for the photo shoot.
link

And don’t get me started on the Olympics. Olympic jerseys are their own thing and are not supposed to resemble what is worn by national cycling federations the rest of the year(hence, some of the garish flag desecrations of the past).

I’m not sure who that “Skin is handing off to “John Riggins”.

That is great to see; however, as freshmen, I wonder if they really had a choice. I suspect attending the match in uniform was mandatory.

I count 7 teams with better looking helmets in the 70’s (the eBay magnet board) than what they wear today.

Adidas’s director of global marketing James Gatto, along with 9 others, are facing federal charges of bribery, fraud, and corruption. This is going to get ugly, and we might see major changes taking place regarding the role between athletic suppliers(Adidas, Nike, UA) and the universities.

So there is a shortage of kelly green and philly cant wear the uniforms we deserve them in yet they can make kelly green shirts for old packer players. GOT IT

and can someone explain the one shell/helmet rule to me again since Aaron Hernandez only wore one helmet with the PATS but still had killer CTE?

and what about when a player gets traded? did anquan boldin take his helmet with him to each new team he played for?

Love the site! keep up the great work!

can someone explain the one shell/helmet rule to me again since Aaron Hernandez only wore one helmet with the PATS but still had killer CTE?

Sigh. This is like saying, “Can someone explain why I should bother to quit smoking when my buddy who never smoked ended up dying of lung cancer?”

Is it just me, or does the link look like it was inspired by the ill-fated link that Patriots fans link?

I noticed that too and thought the same thing.

The Packers Alumni polos are available as part of Nike Golf’s promotional products range. Anyone can order them, but that’s the only shade of green available.

The Tony Dorsett lottery ticket scratcher is odd because we didn’t get the lottery here (Texas)until 1991 or 1992 and Dorsett wasn’t playing at this point. America’s Team I guess.

Yes. And several other NBA teams have had it as recently as the past two seasons. It’s not unheard of; just unusual.

Sorry if I’m slow on the uptake here, but can somebody explain what OBJ’s “No FG Club” message on his cleats is supposed to mean?

My guess is that it’s stating that the goal should be touchdowns, that the team should never settle for field goals.

Most likely, to put it family friendly, “No F-Words Given” which is slang for not caring what people say about you.

Todd Radom’s baseball logo piece was a great read. I like that historical significance and continuity was part of his justification for many of the picks. I like when sports teams maintain a visual identity over decades of existence through logos and colors… as opposed to some NHL teams like the Kings, Penguins, Sabres, Canucks, etc. who make several wholesale identity changes over the years…