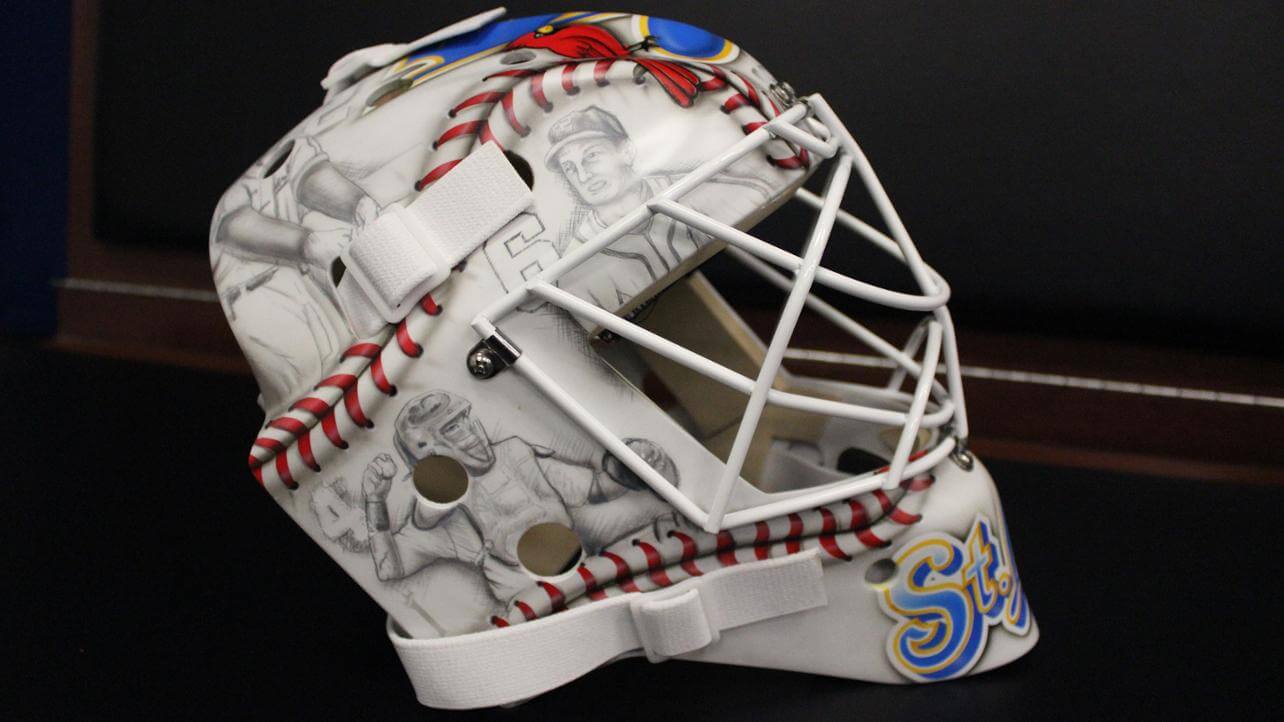 Don’t look now, but the NHL Winter Classic is almost upon us. This season’s installment features the Blues hosting the Blackhawks at Busch Stadium in St. Louis, so Blues goalie Carter Hutton is saluting the stadium’s primary tenants with a Cardinals-themed mask — a pretty cool move. Additional photos and info here.

Hutton’s mask is part of a baseball trend in this year’s Classic. It had already been reported two weeks ago that Blackhawks goalie Scott Darling would have a Cubs-themed mask for the game: 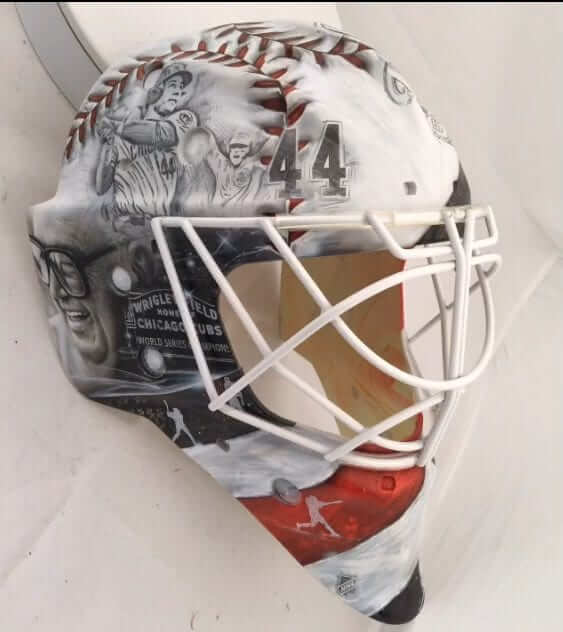 In addition, Blackhawks players will be wearing Cubs-themed skates in the Winter Classic alumni game.

(My thanks to Jacob Bischoff for tipping me wise to Carter Hutton’s mask, and to Phil for the alumni item.)

’Skins Watch: The alt-weekly newspaper Cleveland Scene — which is run by Uni Watch alum Vince Grzegorek, don’tcha know — has been running a contest to redesign the Indians. They’re trying to whittle the field down to five finalists, and you can vote for your favorites here.

NFL News: The Dallas Times Herald ran this full-page cartoon/ad in The Green Bay Press-Gazette on Thursday, Dec. 29, 1966, three days ahead of the NFL championship game between the Packers and Cowboys in Dallas on Sunday, Jan. 1, 1967. “Couldn’t figure out who the cartoonist was,” says Jeff Ash.

College Football News: The Wisconsin and Western Michigan mascots for next week’s Cotton Bowl — each seven feet tall and 750 pounds — are being made out of old Goodyear tire (from Jason Hillyer). … Georgia Tech will have a new uniform combo for the Gator Bowl, which will make for a color-on-color game (from Paul Husack). … Virginia Tech has worn a lot of uni combos this year (from Andrew Cosentino). … Another case of a team honoring its opponent: With Nebraska set to play Tennessee in today’s Music City Bowl, the Vols will wear a memorial decal for former Cornhuskers punter Sam Foltz (from Lee Wilds). … FNOB alert! That’s Matt Elliott (obviously) of Michigan, back in 1991 (from Sam Katz).

NBA News: Rockets rookie Chinanu Onuaku has brought the underhanded free throw back to the NBA. As you may recall, we discussed the aesthetics of the underhanded shot about six months ago. … 1990s-themed jerseys tonight fot the D-League’s Fort Wayne Mad Ants (from Adam Johnson). … The Bucks are trying an interseting season ticket package: 10 home wins, instead of just 10 home games (from Adam Herbst). … The Cavs and Celtics went black vs. green last night (from Andrew Cosentino).

College Hoops News: Auburn debuted new uniforms last night. It was the first time in team history that they wore “Tigers” on their chest (from Clint Richardson).

Soccer News: Manchester United’s new third kit has leaked. The new design is grey, described as “a stark difference from the [current] white and black third kit” (from Tim Cross).

Grab Bag: In Delhi, India, air pollution is so bad that filter masks have become part of the standard police uniform. … The rap group Run-DMC is suing Walmart and Amazon for using the group’s logo without permission. … $32 million worth of fake Nike and Adidas sneakers have been seized by authorities (from Jason Hillyer). 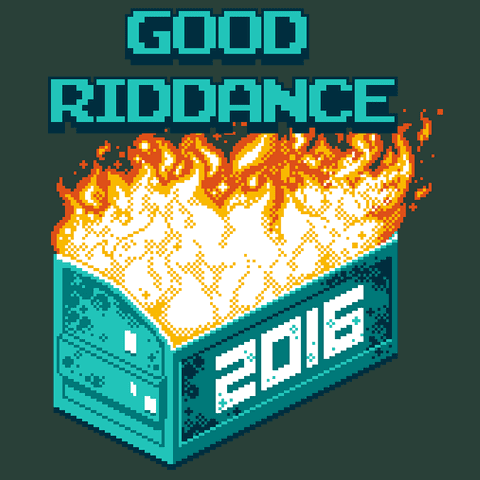 Holiday schedule: Phil is back on the job this weekend, so look for him to have lots of college football bowl coverage tomorrow and Sunday, although he might go light on Ticker coverage. I’ll be back on Monday, but it might be a light content day instead of a full-blown Monday Morning Uni Watch installment — we’ll see. Things will start to get back to normal on Tuesday, and we should fully regain our stride on Wednesday.

Tomorrow I’ll be following my annual Dec. 31 custom of meeting up with friends for lunch at an old-timey Manhattan spot, followed by drinks at an old-timey watering hole, a ritual we call New Year’s Eve-ternoon. I usually refuse to go out on NYE in NYC (driving is bad and the subways are worse), but a friend in the neighborhood is having a party, so the Tugboat Captain and I may walk over to check that out. Or we may stay in.

Looks like the “redesign the tribe” is seeking to cut down to five finalists by January 10. There are 40 concepts I can see.

Too bad every single one of the designs is absolutely terrible.

Let’s see what you can do

At least six of the designs would be above average in the current MLB lineup. And “average in current MLB uniforms” isn’t even a valid test for whether a baseball uni concept is better than terrible: The test is, Is it better than the worst uniform set in MLB today? And of the 40 finalists, easily 20 are better than the 2016 D-Backs or the 2017 Padres.

And, at the moment, the actual Indians have a pretty terrible uniform set, thanks to a confused double identity by which the team has tried to half-ass the transition away from Wahoo. Four of the designs are clearly better than anything the Indians currently wear.

I’ll take the Tribe, Municipals or Spiders, bit I *really* like the Arrows.

Why does Georgia Tech rarely wear its navy blue jerseys?

Well, blue (in any shade) is not a school color, so that’s reason enough for me!

Among the fan base, there was a bit of a belief in a blue jersey “curse” for a little while, as things tended to go VERY badly every time the team wore them in recent years. After the 2012 Sun Bowl win over USC, that sort of talk seems to have subsided.

Blue is most definitely a GT school color. I don’t know where you got that information from.
link

Official *accent* color. To me, that means trim, at most, is where dark blue should be found. Definitely not the main jersey color.

I guess it’s a matter of semantics. Georgia Tech’s colors are White and Old Gold (which admittedly has been a moving target over the years–I didn’t realized they’d taken to calling it Georgia Tech Gold). Navy has been an accent color for many years, and there is a history of black being used in this capacity as well.

Note that the GTAA communications page lists colors as Old Gold and White. At the very least the accent colors are secondary, and much more fungible.

D’oh! Forgot to include the link:
link

Calling it “Georgia Tech Gold,” along with specifically defining it in terms of Pantone, CMYK, and hex values (among others), allows Tech to trademark the color. I’m not sure they could trademark the name “old gold” as readily.

GT is a white-at-home team, similarly to LSU and the Cowboys.

Glad to see Guardians and Sentinels in the Indians contest. Those have been my favorites, along with Spiders, for years!

I like Cleveland Spiders. It is a nickname which is a nod to the past. Yet, it would also work well as a nickname if brought back these days.

The hockey graphic showing the playoff odds for each team would be a LOT better if they used the Pens current color of Pittsburgh gold & not last year’s vegas gold!!!

Today’s ESPN column is up:
link

Just went to the mailbox and found the Mets Rushmore shirt I won in the UniWatch raffle. Thanks Paul and keep up the great work!! Have a safe, healthy and blessed New Year!!

All hail our corporate overlords.

Surprised United is doing a grey kit, as they had an infamous match wearing one and didnt wear them much if at all after that.

They’ll call it “silver” as in silverware. No one will mind. The graphics of the Trinity and Matt Busby statues will make it very popular with United fans.

Amen to Good Riddance 2016–what a dumpster fire this past year was.