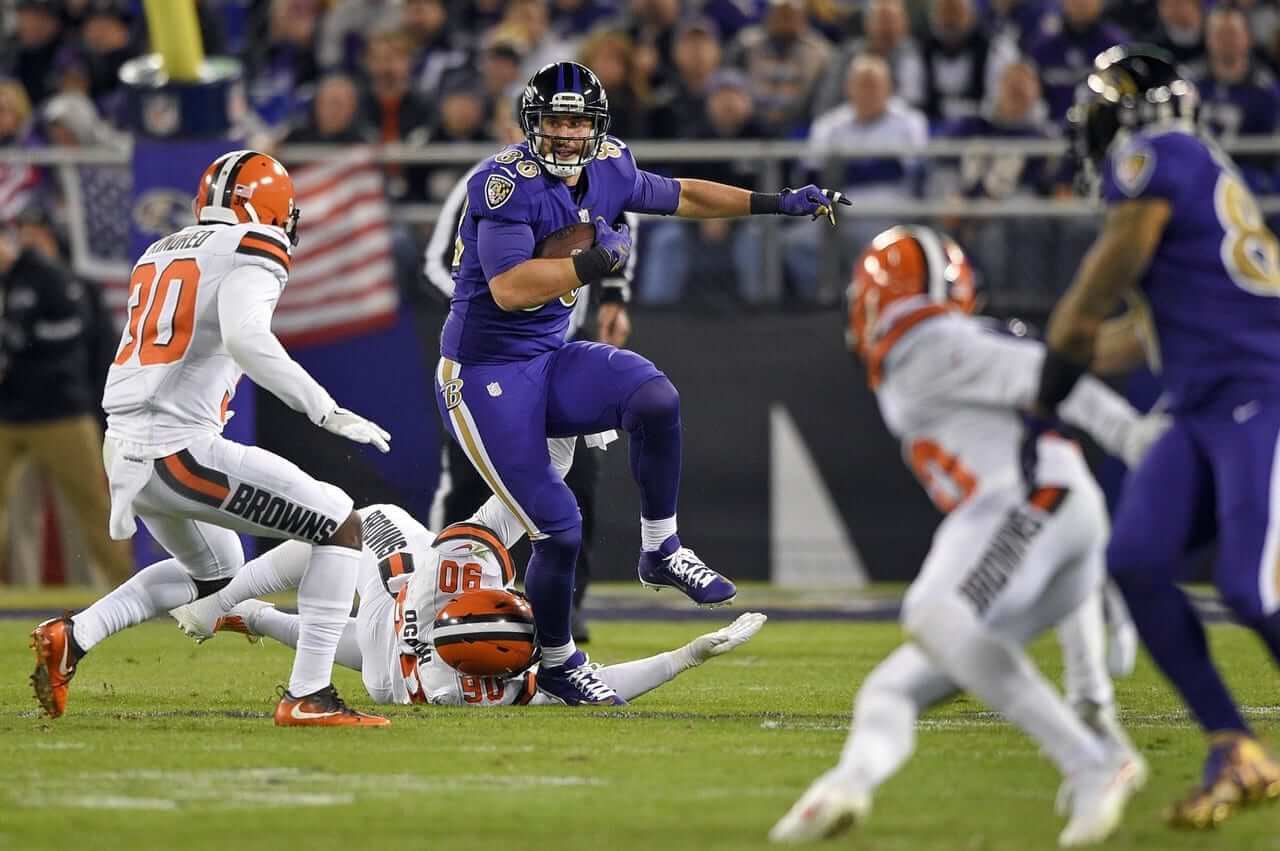 Just about any game including the Browns (or at least the Browns’ pants) is going to look pretty bad. Toss in the Ravens going mono-purple and you can understand why I went out and saw music last night. (Actually, I went out because two different bands that includes friends of mine were playing on the same bill at a bar half a mile from my house, but still.)

I’ll say this: I do like the gold numbers on the Ravens’ Thursday-night jerseys. But the mono-purple look is too much.

Two other notes from the game:

•  The Ravens have had green end zones this season, but they repainted them purple for last night’s game: 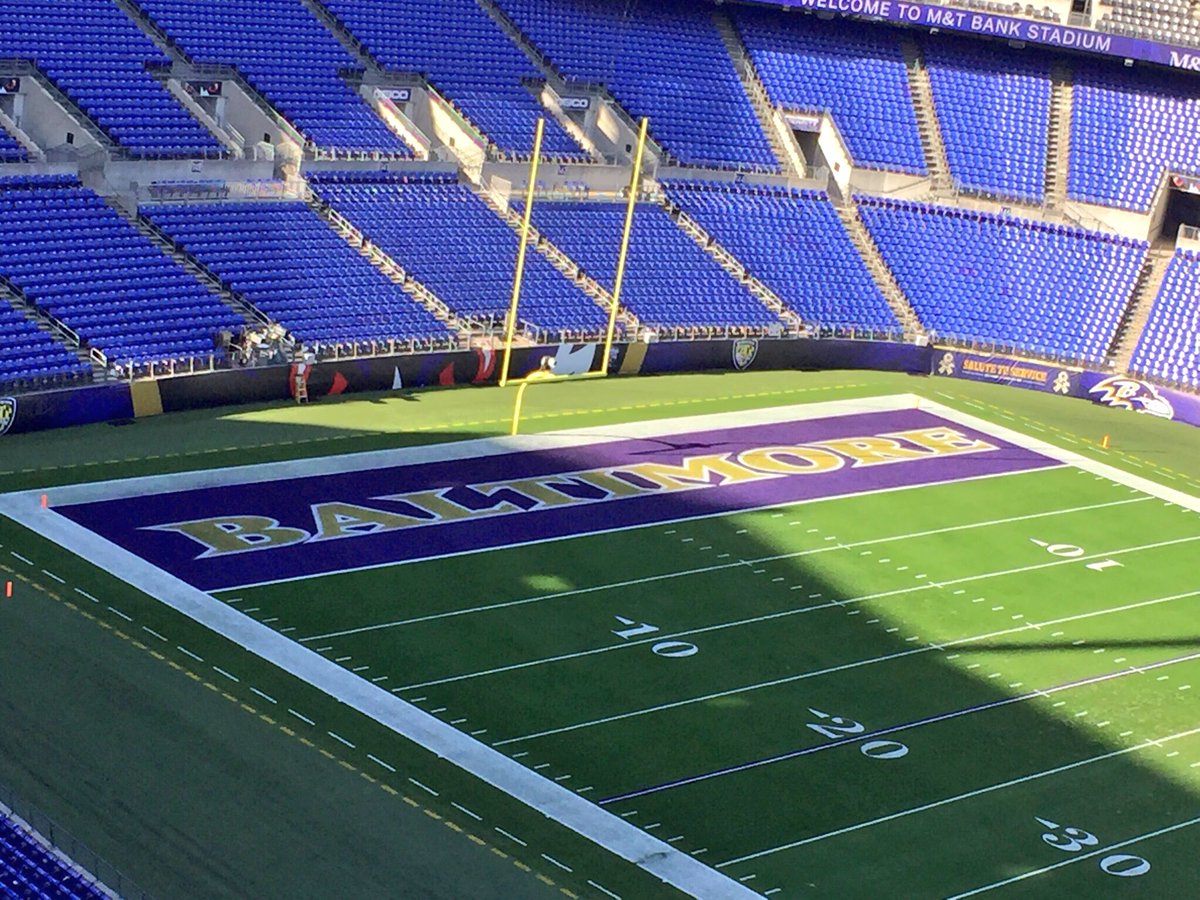 You can see additional photos from the game here. 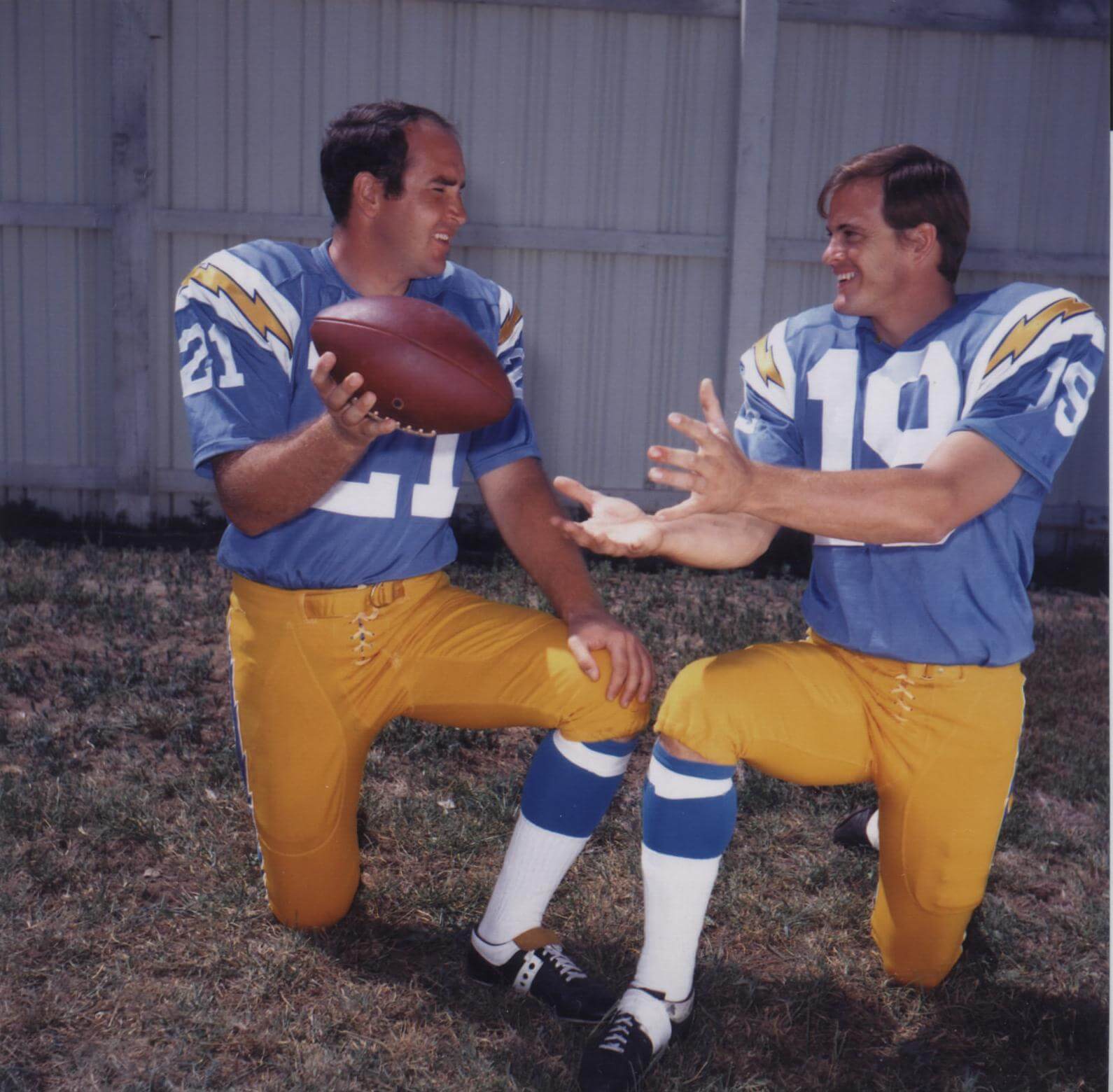 Friday Flashback: With the Chargers having worn their powder blue alternates last Sunday, my latest Friday Flashback piece on ESPN takes a look at the team’s original powder era (as exemplified by John Hadl and Lance Alworth, above), which was more varied and nuanced than you might think. Check it out here. 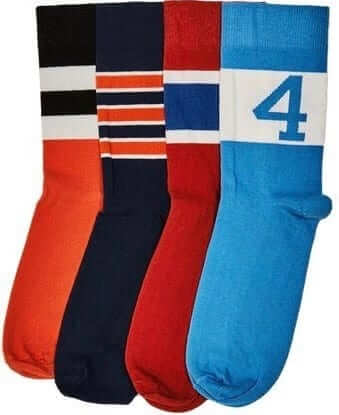 StripeRite reminder: The second batch of StripeRite socks, shown at right, is now available for ordering. For those of you who’ve already ordered, the socks will start shipping on Nov. 21.

My thanks, as always, for your consideration.

’Skins Watch: U. of North Dakota say they are “disgusted” by a fan who was spotted wearing a T-shirt that depicts a Native American teabagging the school’s new Fighting Hawks logo. Classy.

Baseball News: Here are some of the fan giveaways planned for 2017 by the Brewers. Looks like they’ll be marking the 35th anniversary of the 1982 A.L. championship squad (from Adam Vitcavage and John Okray). … The Orioles are installing new sod at Camden Yards (from Andrew Cosentino).

NFL News: If you’ve always wanted to watch Pats owner Robert Kraft go shopping for sneakers, today’s your lucky day (from John Marcelo). … Here’s an interview with the artist who designs Steelers WR Antonio Brown’s custom cleats. By coincidence, the other day I interviewed two other guys who do custom NFL cleats — I’ll have an ESPN piece about them next week.

College Football News: Military appreciation helmets for Valdosta State (from Matt Wilson). … Looks like Michigan State might be bringing out the bronze helmets for tomorrow’s game against Rutgers (from Colin Dilworth). … Pro-agriculture helmet logo for Northwest Missouri State (from John Fitzgerald). … Stars/stripes helmet design for Arkansas State. … Blackout uniforms last night for Arizona State. … Here’s a piece about what it was like to play for former Louisville coach Lee Corso. Key passage: “Another season, Corso called us in and said he hated that uniforms eliminated all manner of individual expression. He didn’t like that concept. So he supplied little bottles of white and red paint for each player to decorate their cleats any way they wanted. I was a plodding offensive lineman, but I remember feeling like Mercury when I painted my shoes white with red lightning bolts on the side” (from Kenny Ocker).

Hockey News: Military appreciation uniforms for the Hershey Bears. … The WHL’s Kootenay Ice have added a memorial decal for former player Marek Svatos (from Jim Wooley). … The Sharks will be giving away California Seals T-shirts on Jan. 7, and will also have Seals-centric pregame activities. Not clear yet, at least to me, whether they’ll also be wearing throwback uniforms. Fingers crossed (from Richard Paloma). … Sabres G Robin Lehner has put “Trump” on his mask’s backplate. Additional info here (from Joeseph Pitirri). … Predators-themed jerseys upcoming for the Cincinnati Cyclones (thanks, Alex). … Camouflage warm-up tops last night for the Penguins, with stars/stripes numbers on the back. “Yikes,” says Jerry Wolper. … The WHL’s Vancouver Giants are wearing tribute uniforms for former co-owner Pat Quinn, who’s about to be inducted into the Hockey Hall of Fame. “The uniforms are similar to the original Vancouver Canucks NHL uniforms Quinn wore as a player, except with black trim added,” says Wade Heidt.

College Hoops News: Here’s a look at Cincy Bearcats basketball uniforms dating back to 1898 (from David Hall). … Oregon will go G.I. Joe for the season-opening game against Army (thanks, Phil).

Soccer News: Liverpool is exploring a partnership with the Israel Tourism Board that could result in the team wearing the Star of David on its uniforms. … England and Scotland will defy FIFA by wearing poppies for today’s match at Wembley (from George Chilvers). … “The Brazilian National soccer team wore black armbands in remembrance of Carlos Alberto Torres during Wednesday night’s World Cup Qualifying match versus Argentina,” says Saurel Jean Jr. “The exception was defender Dani Alves who changed his number from 2 to 4 and wore a white armband as the team captain.”

Grab Bag: A new exhibition that will open this weekend in NYC focuses on the Rolling Stones’ stage attire. … New flame-resistant uniforms for the U.S. Navy and Marines. … F1 driver Lewis Hamilton will wear a yellow helmet in honor of his hero Ayrton Senna for this weekend’s Brazilian Grand Prix. … In the wake of the U.S. presidential election, Mexican F1 driver Sergio Perez has dumped his sponsor, Hawkers sunglasses, after Hawkers tweeted that its product would come in handy for Mexican citizens who want to hide their “crying eyes tomorrow when you are building the wall.” … UNC is celebrating its national lacrosse championship with this bobblehead (from James Gilbert). … Nike’s 2017 uniform catalogs for various sports are available here (from Todd McGuinness). … After a New Balance executive was quoted supporting president-elect Donald Trump earlier this week, many sneakerheads burned their New Balance footwear (from Jason Hillyer). … Awesome piece by the great Rob Walker (full disclosure: a good friend of mine) about the nature of redesigns throughout the design world. Strongly recommended. … Illinois farmers who are also past or current members of the military can use a new logo to market their products.

Today is Veterans Day. If you’re a veteran, please accept my thanks for your service.

The Tugboat Captain and I are taking advantage of the three-day weekend and going off on a short road trip. Hope everyone else has fun weekend plans as well. See you back here on Monday.

In the Flacco chinstrap photo #55 for the Browns face REALLY looks a lot like the Dawg Pound dog/logo to me.

Did you spell John Hadl’s name wrong on purpose?

No worries, what I should have said was how nice it was to see those magnificent Charger Unis featured on a Flashback Friday feature. Great look!

A agree it’s great to see those swell sixties threads. The Oilers set in the first pic is also terrific.

I believe the Indians are installing be sod at the moment as well! :)

For the shirt the Sharks will be giving away on Jan. 7, technically that is an Oakland Seals shirt in the link, rather than California Seals.

It has the Seal within the “O”. The original California Seals logo had the seal within a “C”. Then they had quickly changed the name to the Oakland Seals and changed to that logo – before eventually becoming the California Golden Seals in 1970.

Here is an explanation from our NHL Uni Database friends:

So is this the first sleeved basketball jersey in the Presidential collection?

Re: ‘skins watch… wouldn’t call myself an expert on this topic by any means, but based on the pic, the description of the teabagger & teabaggee should be reversed (which is probably worse?).

While the Raven’s purple monochrome isn’t great; it’s better than an all black monochrome offering. I like gold/white numbers and also the pant striping. I think the Ravens should ditch the black and adopt this look going forward; purple jerseys over white pants home and white jerseys over purple pants road.

If the Ravens added a bit of black striping and lessened the gold some on the purple pants, they would look pretty good as a road uniform option to be worn with their white jerseys.

Not a fan of the ravens uni’s or purple in general, but the purple pants surprised me…big upgrade to me. Not a good mono look, but would love to see it paired with the white jersey.

Also think ND hoops has a small tweak…diagonal striping on the home shorts similar to their gold set. Used to be vertical.

Interesting to me that the Ravens had yet another type of pants striping. Current white pants have a single very wide black stripe. The gold alt pants have a purple-black-purple where the middle stripe is quite a bit wider than the outer stripes. These seemed to be three equal width stripes.

The stripes from last night would be a major upgrade on their current black pants. Better yet if they were all just a tad narrower.

I’m a Brewers fan, but I’ll still say this: Can teams please not celebrate an anniversary every five years? A 35th anniversary of an AL pennant (not even a WS title) seems a little silly to me, even if it is the high point of the franchise.

Permissible sports anniversaries: Any number that corresponds to a U.S. currency note or coin in current circulation. 1, 5, 10, 20, 25, 50, and 100. 1 is just the normal season-after-we-did-it commemoration. I don’t include 2, whice is a currently circulating bill, but only because I’ve never heard of a second-anniversary celebration for anything other than a marriage.

I like it as well. Can we get this to the commissioners asap?

A one year anniversary? Isn’t that called “last year”?

Re: Antonio Brown’s cleats article
“…What does Pane charge Brown? They haven’t even discussed money. The two are friends, and Pane is sure Brown will be fair whenever they start talking turkey.

…He has no idea what to charge them, but he’s not too concerned about it, since he cares more about the art than the money.

Still, for Pane, business is boomin’.”

Way to go artists who are finding an outlet for your work with the shoes. Very cool. But treat it like a business– business isn’t “boomin'” if you’re not even discussing money or know how to value your great work.

Good on England and Scotland to FIFA where to put their ban; the poppy is not a political statement, it’s a nod to the thousands, even millions, of British and Commonwealth soldiers that made the ultimate sacrifice in defense of freedom and basic human rights. FIFA is in the wrong here… although, I’m sure they’d be willing to look the other way, for… well, a little quid pro quo, no?

… for a few quid at least

You both win there.

The ND shirt is an indian being teabagged, not the other way around. The depiction on the shirt would actually be in support of the new logo.

While it may “support” the new logo, it’s a terrible way of doing it.

Love the picture of Hadl and Alworth..that combo with the gold pants i think is the best Football uni by far…Spanos is clueless in uni regards as well as everything else involving owning a team…tough times here in SD