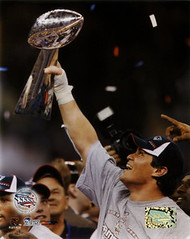 [Editor’s Note: Last week I mentioned that Joe Skiba had sent me some Super Bowl confetti. That prompted longtime reader Nicole Haase to recall her own Super Bowl experience, which included a lot more than confetti. Here’s her story — I’ll rejoin you down at the Ticker.]

I went to college in New Orleans, which was the site of Super Bowl XXXVI in 2002. A few months prior to the game, I learned that they were hiring security personnel to work during the weeks leading up to the Super Bowl, with a chance to work at events on gameday and possibly even at the game itself. I don’t exactly project the kind of imposing presence that security people usually have (I’m 5’4″ on a good day), but it sounded cool, so I applied and ended up getting hired.

Remember, this game took place a few months after September 11th, so we had to go through some pretty serious background checks to be allowed to work. Once I passed that, I was asked to come to an orientation at a local hotel. I sat through a slide show that basically said to look for things that might be suspicious and to behave professionally. I had my picture taken and was given an official I.D. badge, which I was told to wear at all times.

Whenever we arrived for a shift, we were given a shirt/windbreaker/jacket to wear, which we had to turn in at the end of the shift. I had two serious problems with this policy: First, the hand-out windbreakers were always some combination of mustardy yellow and navy, and we were always required to wear black pants and black shoes, and I’m the staunchest member of the No Navy and Black battalion. As far as I’m concerned, there is absolutely no time when you should EVER wear these two colors together. EVER. Also, I’m certain the windbreakers weren’t washed after every shift. If ever.

I worked somewhere between seven and ten shifts (they’ve blurred together in my head) during the two-week period leading up to the game. The first few shifts I worked were from 7pm to 7am, around the perimeter of the Superdome itself. The whole thing was fenced off, and there were helicopter patrols as well as police and dogs, but they wanted a “security” person at every bank of doors. In case you were wondering, there aren’t many things more boring than sitting outside the Superdome around 2am staring at the sky.

I also spent a couple of days working at the NFL Experience, an interactive fan thing held at the Convention Center. My most notable encounter here was the day I was “security” for the MTV Rock N’ Jock football game that took place. This mostly meant I stood between the two sections of bleachers. Ostensibly I was ensuring that no one jumped Tara Reid, but mostly I just stood there. A lot.

When I checked in on Super Bowl Sunday, we were given new polos that we were told we could keep. They were long-sleeved with white and another color block, dependant on which area you’d be working in. Unfortunately, mine was lime green and white — talk about a bad color combination! As you can see, they were also screen-printed with the new Super Bowl logo (because of September 11th, the logo had been changed from earth tones in a vaguely Survivor-ish theme to a big red-white-and-blue extravaganza) and lots of confetti-ish fanfare.

So that’s what I had to wear this to the “Owner’s Tailgate,” which is basically a big free food and drink concert to keep all the big shots entertained until they head over to the game. I mostly watched the loading dock, which turned out to be cool because I met the Barenaked Ladies and Gwen Stefani, who were performing. The downside was that the loading dock was open and it was chilly and we weren’t issued any coats.

After the tailgate I was sent over to the Superdome, where I had to check in again and this time I was given mustard windbreaker (here’s the back view), complete with NFL tagging. I was also given all sorts of laminated maps and information cards to wear around my neck, as well as a bigger and brighter I.D. badge.

They put me in a holding room and I was waiting for an assignment when a guy came and said I was going to work outside. I was still shivering from my previous assignment outside and basically told him, “Look, I was just outside for four hours without a coat and now you’re going to put me out there in this flimsy windbreaker thing? No way.”

He was taken aback and told me to sit down and eat and warm up. The food sucked, and as I was sitting there in the depths of the Superdome, bored senseless and a little indignant, I realized I was the only one in the holding room. I also realized I had complete security clearance, so I got up and started poking around.

When I got to a ramp that led to the field, I was a little nervous, but I wanted to see, so I kind of peeked my head down the tunnel and looked around. Another security guy approached me and I figured I was totally busted. Instead he asked, “Are you here for the post?” For a second I was confused, but then I realized he was asking me if I was there to work. So I looked left, I looked right, and then I said, “Sure!” And I hoped no one would catch me.

So he walks me down the tunnel, places me at the 15-yard line, tells me to always have my front to the seats and my back to the sideline, and leaves me there. Right, like if some crazed fan were to bum-rush the field, I’d be able to do anything about it. The security guys stationed on either side of me were in the 6’6″, 300-pound range. Then there was me!

It was a little more than an hour before kickoff and the Fox guys were doing their pregame show about 100 feet from me. Eventually, once they were off the air, they stood on either side of me, taking notes and chatting. Let me say that Chris Collinsworth felt about seven feet tall. And Terry Bradshaw does look as doofy in person.

Turns out being a loudmouth and nosy pays off. I watched the whole game over my shoulder. There was a spectacular pass to the near corner of my end zone that was crazy to watch. The game-winning field goal was also on my end of the field.

But it wasn’t all fun and games. The halftime show was by U2 and of course was a tribute to the victims of September 11th — they used a projector to scroll the names of those who’d died in the attacks. Because of where I was standing and the way the stage was situated, those names also ended up scrolling down me! It was the most poignant, simple remembrance and for me, and it was very moving. I was frozen in place — I couldn’t have moved if I wanted to — and I had tears in my eyes.

After the game, those of us who’d been working the sidelines were taken to the area where they set up police barricades to create a path from the tunnel up to stage where they present the Lombardi Trophy. We quickly shuffled over there and we stood inside the barricades with our backs to the aisle, making sure that only players and team personnel were in this area. The whole Patriots team and the trophy passed within inches of me.

Of course there was tons of confetti, those fake newspaper front pages, etc., and I pocketed a bit for posterity.

I’ve never worn the windbreaker since, mostly because I hate the color. Plus, I guess I figured it would be really pretentious — kind of along the lines of wearing the T-shirt of the band to the concert. All of the Super Bowl items have been in a tub in my basement pretty much since I got them.

Uni Watch News Ticker: Victory Pennants prexy Morris Levin has a new projedt: Obama of Dreams, a series of baseball-themed Barack Obama T-shirts. “One of my underlying goals is to marry Obama with mainstream culture through baseball,” explains Morris, and I’d like to think that everyone here can appreciate the results, regardless of your political affiliation. ”¦ Lightning players like to hold onto their battered gear (with thanks to Ryan Connelly). ”¦ Interesting story here about the name of Toledo’s new minor league hockey team (courtesy of Tom Konecny). ”¦ Interesting piece here on the evolution of car logos (with thanks to Mike Cooperman). ”¦ More about Adidas and Dale Jr. here (with thanks to Scott Steele). ”¦ “The Blue Jays have changed the font on their BP jerseys to coincide with their new road jersey font,” writes Ben Wideman. “Compare last year with this year and you see a direct correlation between last year’s road font and this year’s.” ”¦ “I work as a media coordinator for the USA Sevens Rugby Tournament and Festival, the largest commercial rugby tournament in the States,” writes Blake Mannion. “As a Uni Watch fan, I’ve compiled a gallery of all 16 international uniforms, some oddities, and some images of rare occurences (New Zealand wearing white, the rarely seen South African away jersey, etc.).” ”¦ Several readers reported that Virginia Tech’s Dorenzo Hudson, who normally wears No. 2, threw up on the court and on his jersey during last night’s Maryland/Tech game. After a clean-up break, he returned wearing No. 4 and NNOB (nice job by Hannah Krug with the screen grab). … Earlier this season, UConn unveiled a gray alternate set. Now the women’s team has done likewise (with thanks to Ed DiPrimio).