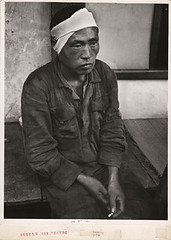 High school football season is several months away, but I can’t wait that long to tell you about Millard North, a Nebraska school whose players wrap athletic tape around their helmets. The look dates back to the mid-1980s, when the upper flap of a player’s chinstrap kept coming loose and officials insisted that it be secured. The coaching staff wrapped some tape around it, and the look caught on from there. Cool story, but it kinda looks like the entire team is being treated for head wounds.

While we’re at it, Dan Rogers just checked in with news of another high school football oddity: Groton, a Massachusetts prep school whose horizontal stripes look endearingly weird. I was hoping that the rest of the school’s teams would have a similar motif, but unfortunately they all look relatively normal. 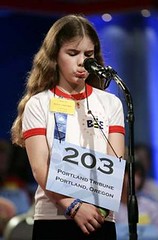 Schoolmarm corner: Okay, so those spelling bee kids looked pretty dorky, but let’s cut ’em some slack, since they’re all gonna get beaten up as soon as they return to their hometowns. And speaking of spelling, here’s something that’s been bugging me: Now, Uni Watch is obviously a very detail-oriented project, and I’d like to think it attracts detail-oriented readers. So why do so many of you out there seem to have trouble with the name Uni Watch? Among the terms people have used when e-mailing me: uniwatch, Uniwatch, UniWatch, uni-watch, Uni-watch, Uni-Watch. Look, it’s two words, both capitalized, no hyphen: Uni Watch. Simple.

Uni Watch News Ticker: The Bucks have announced that they’ll unveil an updated logo (which can’t help but be an improvement over their current one) with a new color scheme (word on the street is that the purple theme is being replaced by red) on June 28th, with new unis to follow in September. If only we could get them to go back to using this. … Latest news about MLB’s Cool Base jerseys comes from an anonymous source in the Astros’ clubhouse, who writes: “Found out today that we’ll be wearing the red-brick away Cool Base jerseys. Evidently there’s a problem with getting gray ones, because there are too many shades of gray. I saw the Cool Base and it is EXACTLY the same material as the batting practice jersey. It even has that screened-on jogtag like the BP jersey. You’re going to be able to see the difference if you pay enough attention to the gussets and the material — the red one I saw was pretty obvious. The clubhouse personnel were dreading cleaning them, because scrubbing the material is evidently a nightmare.” Yup, sounds like another real winner from MLB. … Our recent coverage of players with messages and nicknames written on their undervisors prompted a communiquÃƒ © from longtime Uni Watch contributor Bryan Redemske, who works for a fine midwestern newspaper that was recently doing a photo shoot with two U. of Nebraska pitchers. As you can see, the guy on the left, whose name is Zach Herr, had something scribbled under his brim, so they enlarged the photo and found this: “Get Wehrle and Opitz the fuckin ball!” What’s it all mean? Redamske explains: “Herr is a setup man, and a freshman at that. Ryan Wehrle’s the shortstop, Jake Opitz is the second baseman — one of them must have told Herr rather emphatically at some point to induce a double-play ball. The photo almost ran like that, but we Photoshopped it out at the last minute.” Hmmm, not quite as good as the classic Billy Ripken “Fuck Face” card, but still pretty good. (And the “TG” inscription on the side of Herr’s cap? Redamske says, “That’s for Terry Gerch, who died of cancer in April. His kid, Andy, is an outfielder.”) … You don’t often see blood on a baseball uni, but Detroit’s Justin Verlander had either a popped blister or a cut on his hand last night, resulting in some visible splattering (trust me, it was plenty red on TV).

Speaking of cap inscriptions, there were two famous ones that were immortalized in Cleveland. When Tim Crews and Steve Olin were killed in that horrible boating accident during Spring Training 1993, the Indians decided to wear a patch that consisted of the symbols each player drew on the underside of their cap (an arrow and a star) inside a baseball with their uniform numbers.

I’ll hunt up a picture.

Thanks for this Nebraska-centric post. Great pick-up on the Millard North head-wound look. It did spawn one Heisman Trophy winner…Eric Crouch.

The Groton jerseys are nice, virtually throwbacks to football’s rugby ancestry. Now if only they’d stripe the sleeves for a truly classic look. :)

I surfed into that Tigers game last night on ESPN and heard Orel H. mention something about a cut on Verlander’s index finger. Judging by the splatter, it must have quite a cut.

Franklin D. Roosevelt (class of 1900) played football at Groton. I’ve seen photos of him in his letter sweater, but don’t know if there are any of him in his game-day stripes.

on dan patrick right now, they are killing sports worst theme songs…#1 on their list right now?
the mets- our team, our time…

There is a really small pic of FDR’s Groton football team here, no stripes to make out in the pic, but I really can not tell if they are in the uni’s or not, it is so small.

about the writing under the cap I know Ryan Vogelsong writes some type of lyrics under his cap…I could not find a picture to give a URL, but if you go to his photo gallery and go to the 4th picture and you can see some writing under it

sorry here is the site…link

Millard North background – they used to have a blue Mustang (school nickname), which was basically the same design as SMU’s Mustang helmet, until it was given up for the plain silver helmet. The tape around the helmet started in the late 1980s, then a few players each year continued it until it evolved into its present form where all players tape their helmets.

Has anyone else noticed that Northwestern’s softball team’s catcher is lefthanded? How rare is that. I didn’t know they actually make lefthanded catcher’s mitts.

AND, the nats and brewers are in classic negro league unis… complete with aeshthetically correct stockings with white bottoms.. no sanitaries!!!

Thanks for the link to the 93 Indians patch. Despite a million different google searches, I hadn’t found it.

I would just like to point out that Jamie Moyer on Friday wore navy stirrups and white sanitaries.

Little late, but I’ve noticed the two teams playing the Pistons in the past two series- Cavs and Heat- have stooped, not in a bad way, to wearing their alternate jerseys as their away jerseys. Cavs had their blue ones all series long, and the Heat had their red ones instead of black.

Groton’s mascot is the zebra, so I hope the striped football jerseys make a bit more sense now.

Groton’s jerseys did have striped sleeves once upon a time. The team used to wear the jerseys for both home and away games, but around 2000, some ignorant league administrator decided that Groton was required to wear dark at home and white on the road, even though no team in the ISL(Groton’s league) had a football uniform that could be confused with the zebra stripes. Groton’s jerseys had to be changed from all striped to black with stripes above the numbers at home, and all white on the road.

It was the end of a cool traditon, and certainly took away a unique quality of the football team. The football uniforms have less character now, that’s for sure.

Too bad i’ve already renewed my half-season Bucks ticket package; had i known for sure that they were 86ing purple i would’ve cancelled my tickets in protest! Purple rules, red sucks!!!

I really do wish the Bucks would go back to the old ‘standing deer with basketball’ logo. It was fun, instead of the polished and study group tested logos teams use today.